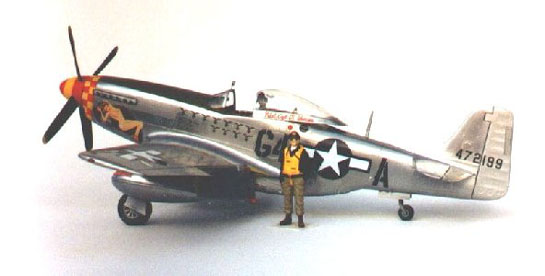 Starting with the Hasegawa 1/32 scale P-51, I first separated the rudder, elevators and flaps, by repeated cutting passes with a #11 Xacto knife. Next, all of the external rivet detail was removed by sanding with 400 grit wet or dry emery paper on all exterior surfaces. Any exterior detail you may want to save can be covered with masking tape to prevent being removed. With this accomplished, all panel lines were re-scribed. A complete Verlinden interior was installed in each fuselage half, and the engine assembled and installed. I didn’t spend very much time on the engine because I had decided to make the engine panels non removable. The cockpit interior was painted, dry brushed and weathered. The cockpit floor was first painted a tan. When completely dry, it was overpainted with a darker brown. After it had adequately dried, I scraped away some of the darker brown to reveal the lighter color underneath to simulate wear and scuffing. The cockpit floors on Mustangs were made of wood. I did not install the seat or radio gear until later. This makes it easier to mask off and paint. Don’t forget the tail wheel. Now the fuselage halves were glued together using Tenax liquid glue. I work slowly on these joints, concentrating on a very small area, only 1 inch or less at a time. I apply the glue with a brush with long fine bristles. The long bristles hold the right amount of glue for this. I apply one pass of glue, let set, and a few seconds later apply a second pass. You then squeeze the joint together, keeping the joint aligned as closely as you can. A small bead of plastic will squeeze up just like a miniature weld bead. This is exactly what you want to achieve. Do this the full length of the joint you are working on. If done correctly, when the seam is block sanded, not a bit of filler will be needed. Also worth mentioning here is controlling the amount of glue. Don’t get too sloppy, but use the correct amount to get the plastic to react as described before. Don’t allow it to run where not wanted though. Allow the glued joints to thoroughly dry at least overnight before attempting to sand any of the joints. 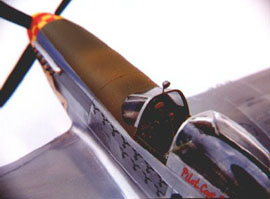 At this point, I decided not to display the gun bays open, so I glued the access panels permanently in place on the upper wing halves. Now I glued the upper wing halves only to the fuselage. Don’t worry about the lower wing until later, but you should use it to make sure that the upper wing section is positioned correctly. Again work slowly and carefully here. These two joints can make or break the whole model. They are the most critical joints of the whole process. Line each joint up, apply the glue as described above and don’t keep fiddling with it. The more you move the joint around, the more glue squeezes out and makes a sloppy joint line. Let each joint set up for a couple of hours or so and then glue the lower wing to the upper halves. Use the same technique on all joints as described on the fuselage joints. Believe it or not, this is the only model I have built that did not require any joint filler and this is great when doing a bare metal finish. After studying the photos of the guns of the P-51, I found that they are installed just below the wing center line. Also the two outer guns in each wing are set with their muzzles protruding out from the blast tubes, but the inner gun in each wing are set back a few inches, so their muzzles are actually set back into the blast tubes and do not protrude. Using a 1/16” drill bit in my pin vise, I drilled out each gun port. Then with a round Swiss file, I enlarged each hole out to 3/32”. Next I cut six pieces of 3/32’ dia. brass tubing 5/8” long and ca glued them in place. Now I cut six pieces of 1/16” brass tubing 5/8’ long. Before installing them, I drilled each one out to .040” inside dia. This makes the barrels look more realistic. By the way. I’ve found that the best way to cut brass tubing is with a Dremel tool at high speed using a thin cut off tool. Next I used white glue to install each barrel into it’s own blast tube with the four outer guns protruding .030” and the two inner ones set back 1/16” into the blast tubes. 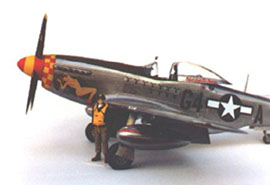 Now for the flaps. After cutting the flaps from the wings, the halves were glued together. If they are to be installed in the down position, the forward edges are too short and will have to be built up and re-shaped. Strips of plastic were glued to the front edges to bring them out to the correct length. They were then filed and sanded to the correct shapes. After fitting the flaps, they were set aside. The rudder was also glued together carefully to preserve the nice fabric covered simulated finish. The mating edge of the rudder was sanded at an angle so that when installed, it will be slightly offset to the left. The same was done to the elevators, so that they will be slightly dropped. Now the horizontal stabilizers were installed using the same gluing techniques as before. Also the upper engine cowlings were also added.

Now is the time to prepare the surface for a bare metal finish. To achieve a good finish, the only way to do this is to prepare the surface for the paint. The smoother the surface, the better the silver finish will be. A bare metal finish will show any imperfection that is left on the surface. I use SNJ aluminum paint with polishing powder. First I start with 1,000 grit paper and a rubber sanding block. As before, any surface detail you want to save should be masked off. With the 1,000 paper, I wet sand the whole surface. Next proceed to 1,500 grit wet. Next 2,500. Now stop and clean out the panel lines.They tend to clog up with plastic dust. Now I use Bare Metal Foil polishing compound and a piece of flannel cloth. Polish the surface until it is actually like glass with out any visible blemishes or scratches. Clean out the panel lines again. Don't forget to do the same to the flaps and the elevators. Also the canopy base and the landing gear doors. Now add the forward windscreen. Putty the joint if necessary. I use bare metal foil to mask off the wind screen. Mask off the cockpit to prepare for painting.

When applying the SNJ paint, just mist on each coat. I’ve found that the lighter the better. If you go too heavy, the paint will tend to be grainy. When done correctly you will have a beautiful sheen without doing anything else to it. Mustangs were not real shiny, but they did have a sheen to them. When shipped out from the factory, much of the aircraft was painted silver. Especially the wings, but not all of the panels were painted the same shade of aluminum. In fact adjoining panels were hardly ever the exact same shade. This was probably due to different manufacturers making different panels, different batches of paint etc. Whatever the case, Mustangs had varying panel shades. This is especially evident with the panels over the gun bays and the engine covers immediately around the exhaust stacks. Using SNJ polishing powder and a piece of clean flannel material, I polished the surface until I got what I considered the right sheen to the paint. If you go too much, you can actually get it too shiny. Now I added a small amount of Testors gloss black enamel paint to some SNJ paint and masked off and painted the panels around the exhaust stacks. I added some Testors gloss brown enamel to another batch and masked and painted the gun bay covers. Several other panels were also tinted in this manner. Now the wheel wells were masked off and painted Testors flat chromate yellow. The landing gear doors were also painted with a thin coat of chromate yellow on the insides. 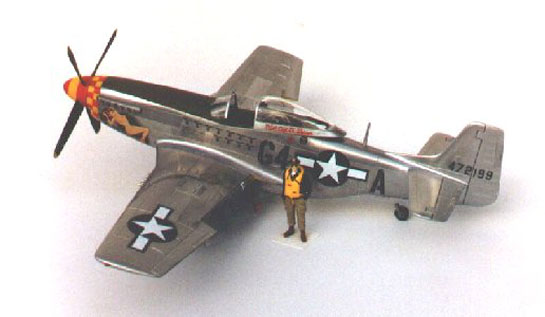 At this time the wheel wells were detailed with added hydraulic lines made from copper wire. Other details were picked out with black paint. The wheel spokes were drilled out to emphasise each spoke. As I was gluing the wheels together, I lined up the tread pattern as close as practical and when the glue was dry, I recut the tread pattern. Then I flattened each tire by pressing down on a hot iron. This also produces a slight bulge effect, but not too much. The spokes were painted SNJ aluminum and the tires were painted Pactra Hot Rod primer dark gray. The anti glare panel was masked off and painted dark olive drab. Next I cut off the exhaust stacks from the exhaust shrouds and added new stacks made from 1/16” brass tubing that was drilled out to .045” inside diameter. The exhausts were then carefully glued into place.

The decals were then applied next. I used the kit decals, but added some detail stenciling from a Superscale sheet. The landing gear comes next. The landing gear scissors assemblies were drilled out and filed out to thin them. After painting the gear, the oleo portion was painted a gloss silver. Brake lines were made from copper wire and the assemblies were Ca. glued into the wheel wells. The landing gear doors were added now and main gear door actuators were made and installed. The tail wheel was painted and the doors added. After being painted aluminum, the rudder was installed and the serial number decals applied. It was painted over with Dullcoat to simulate a fabric covering. The seat was added along with the radio gear and the gunsight. The canopy was dipped three times in Future floor wax, the front rim painted and then it was glued to the canopy base and then glued in the open position. A rear view mirror was made from sprue and copper wire and installed to the front windscreen. The antenna mast was glued on next. A friend, Merle Olmsted, who was an aircraft mechanic in this very squadron, during WWII, tells me that 8th A.F. mustangs radios did not use an antenna wire, but sent and received signals from the radio mast, so no antenna wire was added. After reviewing other 8th. A.F. Mustang photographs, I haven’t seen any wires on any. Other groups used different radio gear and had them, but not the 357th. The spinner was painted red, yellow, red. The prop was painted and decalled. The prop was installed now and the elevators glued on. That about does it. A Mustang from my favorite 8th. A.F squadron in bare metal.

If you are a Mustang fan see also the article about building the same model, but in British Markings by Randy Lutz.