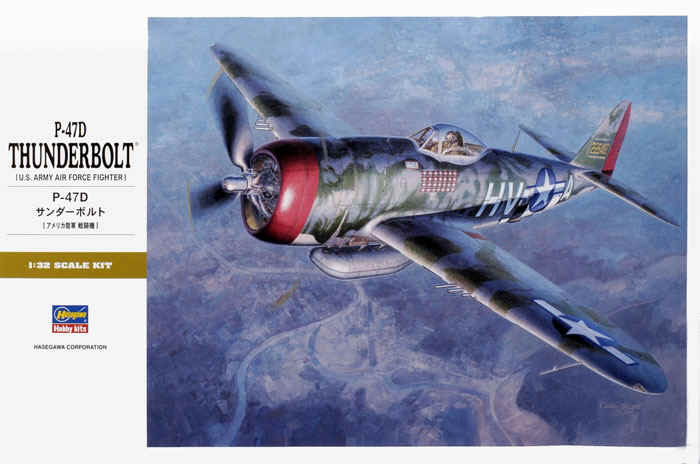 When I discovered, on Stevens International’s “Upcoming Releases” list a few months ago, that Trumpeter was releasing not one but several variants of my near-favorite Warbird in 1:32, I was elated. Then, shortly afterwards, I read that Hasegawa would be producing a kit as well; it was almost too good to be true! All of these big “Jugs” all of a sudden? Wow….! I’ll take them! 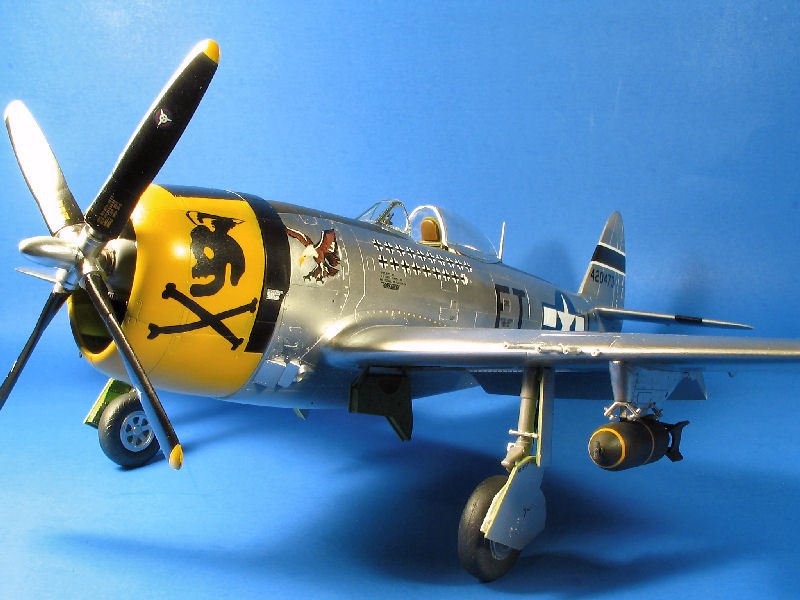 Hasegawa beat their competitor by several months (Trumpeter’s are anticipated in August as of this writing) and they did not disappoint.This kit has raised the bar to a new standard of Thunderbolts in 1:32 scale, much the way Tamiya did in 2003 in 1:48. It is not an upscaled-version of their own, venerable 1:48 “Jug”, but a totally new-tooled production. Released as the “Bubbletop” variant of the Thunderbolt, this kit offers modelers a choice of three aircraft; two P-47D-25-REs from 56th FG (Lt. Col. Francis “Gabby” Gabreski’s D-25 as it appeared on July 5, 1944, and again as it appeared on his last flight on July 20 of that year) and Major Glenn Eagleston’s bare metal ”Winged Skull & Bones” P-47D-30-RE from France, early 1945. Guess which one I’m building 1st?

The sturdy box is typical Hasegawa, including the gorgeous box art. 167 newly-tooled, light grey parts festoon 8 parts trees, plus three small polycap trees. The instruction booklet is just that; a bi-fold, center-stapled booklet. the CAD-style drawings are what you’d expect from Hasegawa, but the booklet format is a welcome change over the folding-style instructions usually included. A large single sheet of perfectly-registered decals covers all three versions including stencils.

The clear parts include two options for canopies; open, or a one-piece closed affair. Of note are the parts included but marked “not for use”; a dorsal fillet, late-model gun sight as used on the D-40 (including necessary “glass” lens parts ), and external mirrors. Inserts are used in the lower wing to enable early and late Ds (pre -30 without dive flaps, and dive flaps with relocated landing light for -30 and higher).

Similarities between this kit and the 2003 & 2004 Tamiya 1:48 Thunderbolt kits are present, but Hasegawa takes the clever engineering one step further. This is an all new-tool kit. The sturdy through-fuselage wing spars, reminiscent of Tamiya’s kits, provide proper dihedral angle for the wings. The undercarriage gear doors are molded so that the inside and outside are separate components, allowing for the ejector-pin marks to be hidden entirely. The few ejector pin marks present on the interior of the fuselage are such that they are totally out of view when assembled. The under wing weapons hard points have poly-cap inserts so that the ordinance or auxiliary fuel tanks can be interchanged, or removed for transporting the model. 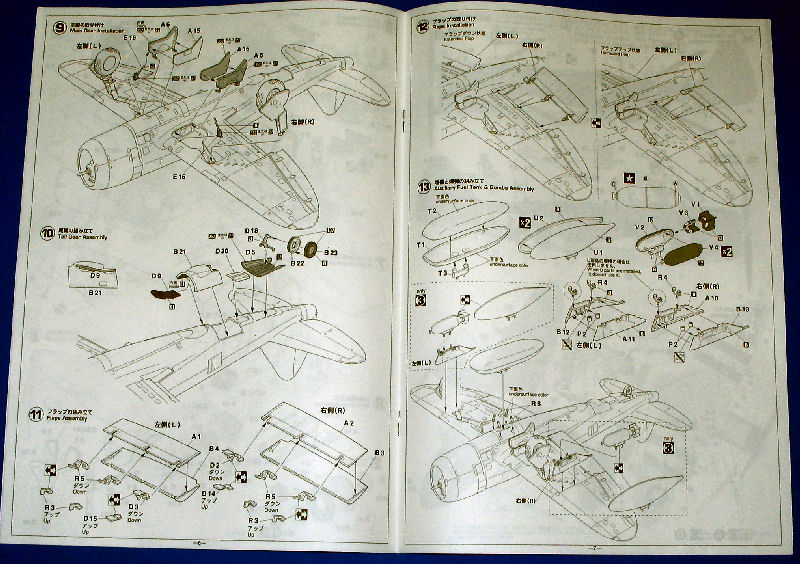 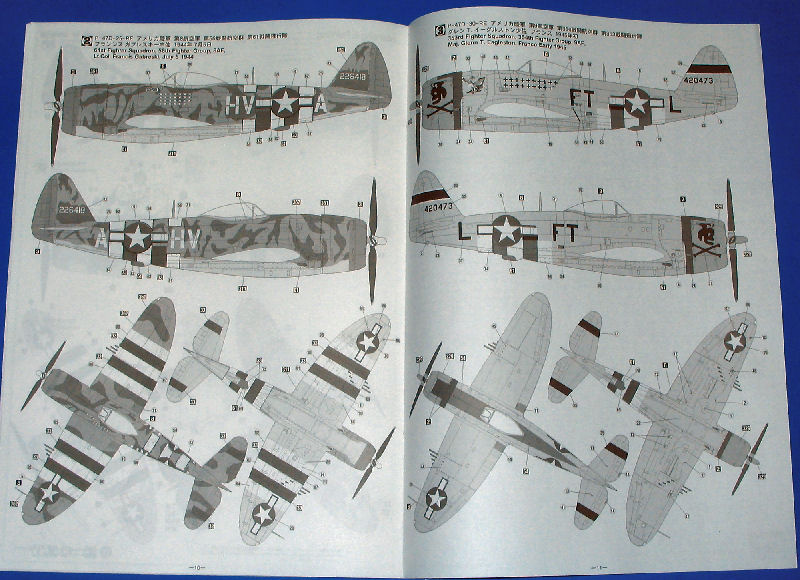 So, how does it build? Like buttah! Seriously…this kit can literally be assembled in a single day with proper pre-painting and careful attention to parts separation. The fit of parts is exquisite, and I used no filler at all during assembly.

The cockpit is nicely detailed. The kit includes a pilot figure, who is equipped with an oxygen mask and hose. This is one piece, so if you notice the starboard sidewall is devoid of the hose that your Tamiya kits all have prominently-featured…you’ll have to attach it as is. The rubber face mask is a nice touch. There are no provisions for a seat harness, not even a decal. So you’ll need aftermarket belts here, or a homemade set. I haven’t decided which route I’ll go, but since these can be easily added later…they will be easily added later! 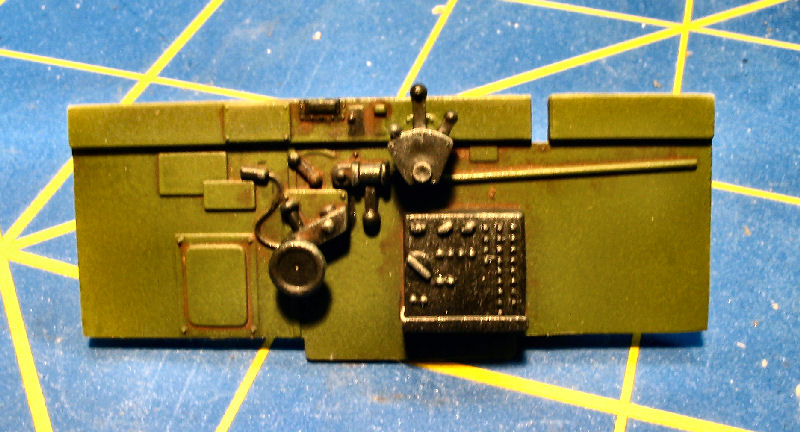 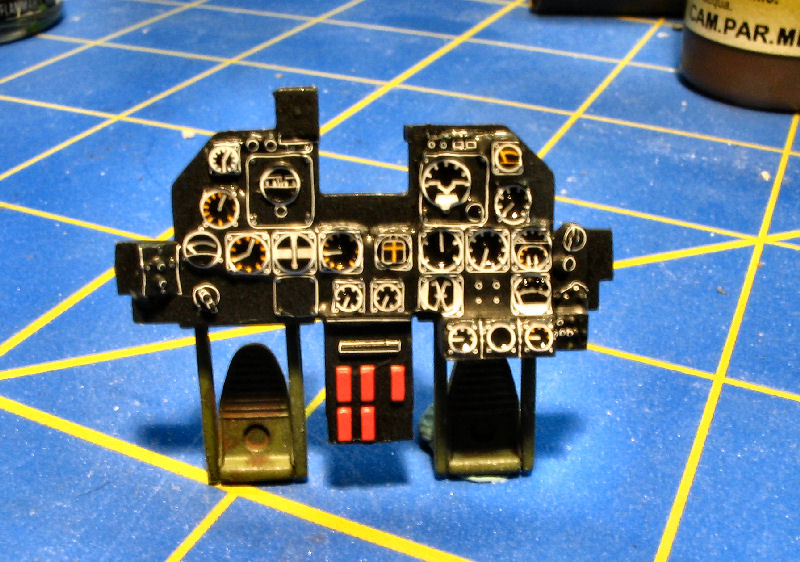 I used the kit-provided decals (3) for the instrument panel. A bit of careful alignment is needed here, but after that and an application of Gunze-Sangyo Mr. Mark softener, they looked perfect. I over sprayed it with Vallejo acrylic matte varnish, and placed a drop of Future into each dial to replicate the glass. The flooring here is non-corrugated, which was present on variants subsequent to the D-27 models. An easy correction to added corrugations, but be advised if you’re modeling an earlier Thunderbolt.

The cockpit tub subassembly sits atop the wing spar, assured to achieve proper wing dihedral. The fuselage, in a port and starboard side assembly, fits together like a glove. Light sanding does away with the seams top and bottom. You have the choice of open or closed supercharger vents…I left mine closed. The same option applies to the cowling flaps. I modeled mine closed again, because in this scale, leaving them open begs for armature detailing. I’ll do that on another build (I have 2 more kits!) but this one was intended as an out of the box project. 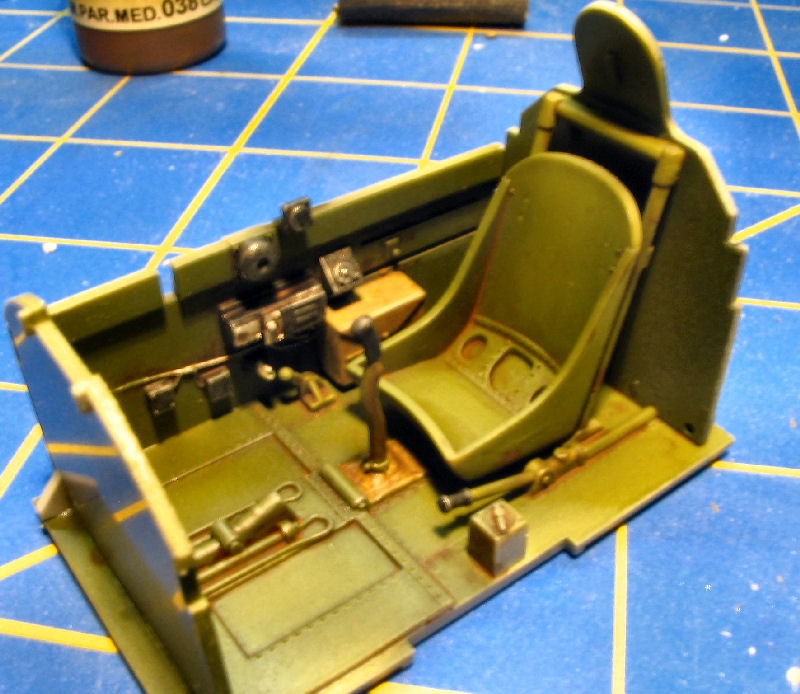 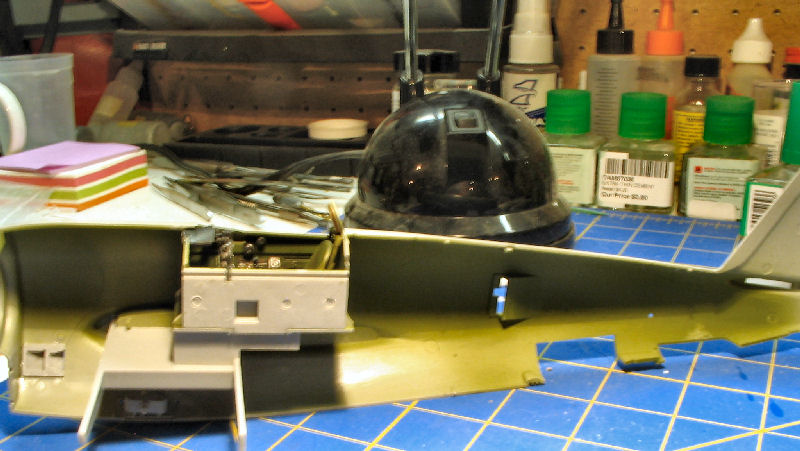 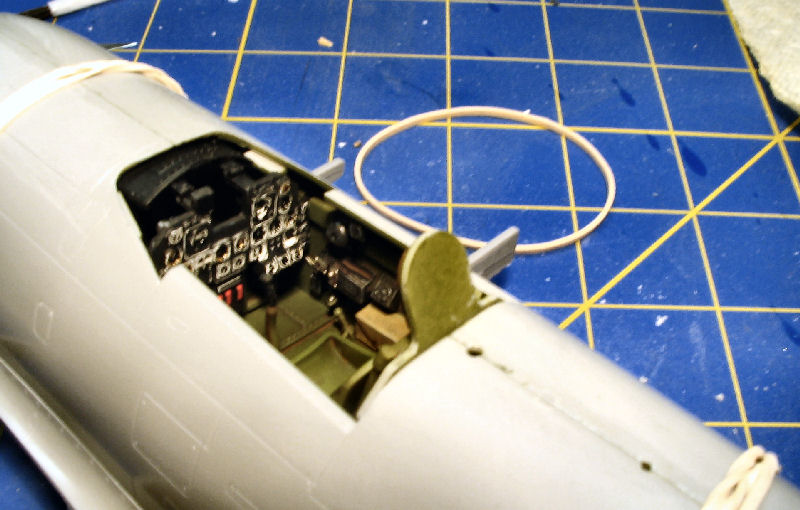 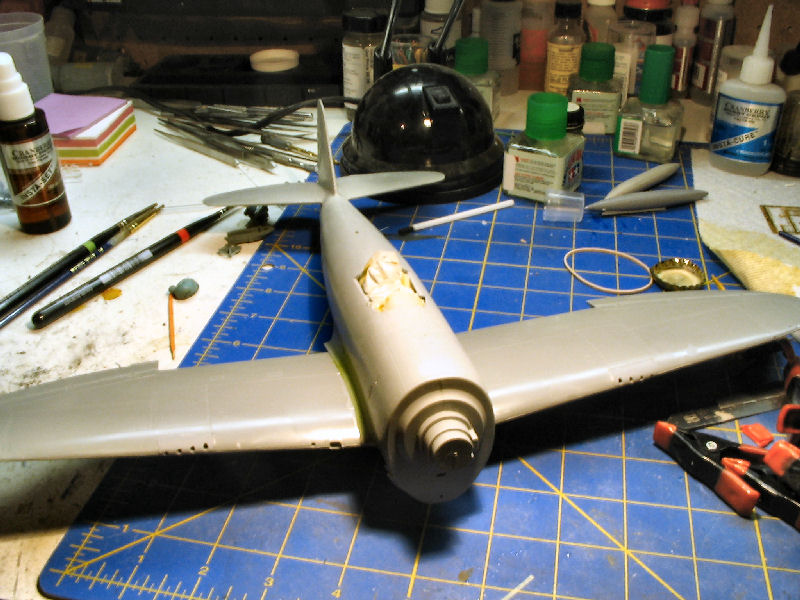 The Pratt & Whitney R-2800 Double Wasp engine is very nicely detailed. A pushrod assembly is included, but the ignition wiring harness will need to be added from fine solder or wire. A reinforcement ring is included to add stability to the 4-piece cowling. The directions would have you assemble the engine, then put the crankcase on the front of it. then, the reinforcement ring is to be added, around which the cowling is assembled. This is a very logical and practical sequence. However, I was doing Eagleston’s machine, which is all natural metal finish (NMF) with black cowling flaps and a yellow cowling. The aircraft, flaps, and cowling were all separate “subassemblies” so I painted them that way.

Then, I diverted from the instructions. I assembled the motor, crankcase, and ring. Then I cemented them onto the front of the aircraft. I assembled the cowling separately. The locating tabs were wide enough to do this without any trouble at all, and provided an assembly sturdy enough to withstand light sanding, buffing, and dropping of it onto the cement basement floor. It seems that has become an at least once-a-project occurrence these days. Once everything was done drying, I slipped it over the engine assembly. It fit snugly into it’s expected place with an audible snap. I thought I’d broken something, but it was really just the cowling snapping into place! It took a little careful “jiggling” of the cowling, but if you’re doing a color scheme like this one, it’s worth the trouble to avoid masking everything off and get perfect demarcations. 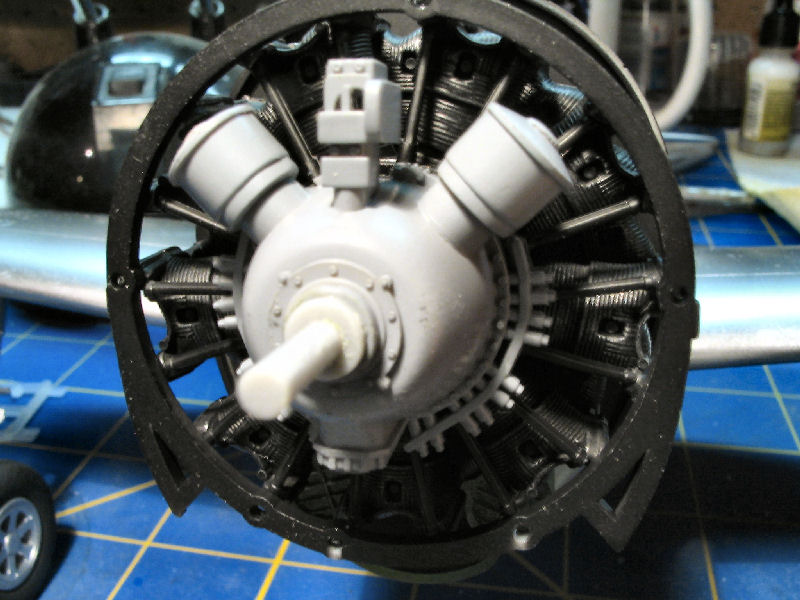 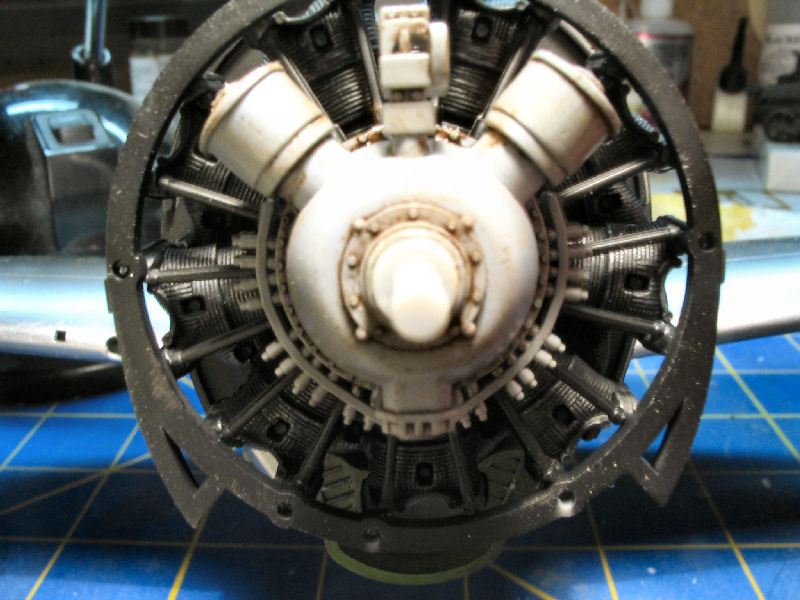 While building the kit, I’d noticed something that I hadn’t seen on any hasegawa kit before…the inclusion of several, small “sprue-gates” on the smaller, highly detailed pieces. What does this matter? Well, a lot. Sprue-gates are egress points on a part molding which allows the plastic ways to run out and away from, allowing for more detail to be included in smaller parts. It’s the key to “Slide-Mold” technology.DML introduced “slide-mold” technology in 2005, and it’s now, apparently, being used by Hasegawa. By allowing more places for the excess molten plastic to run off to, more detail can be sculpted into more, and smaller, parts. The result is a highly, delicately detailed part with more “sprue-gates” attached to it. I’m excited to see another company using this technique, because what it breaks down to is simple; better models for the modeler to build! 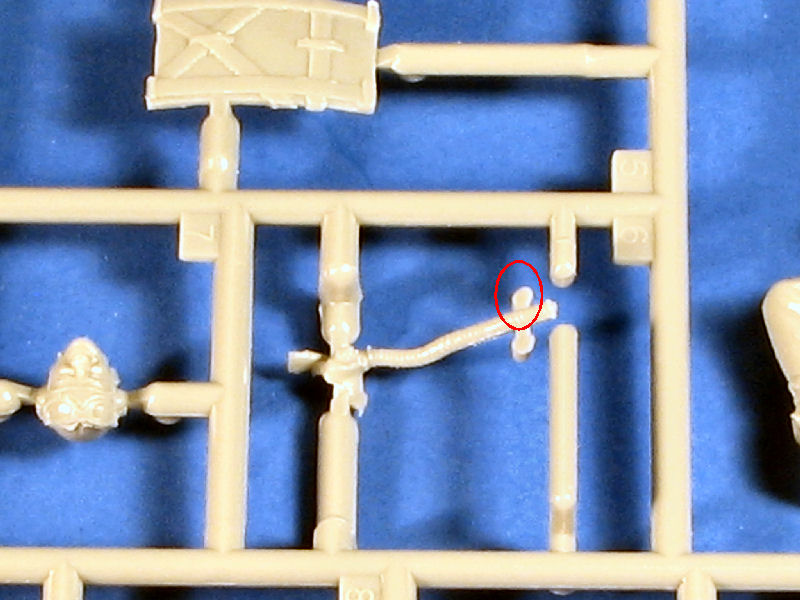 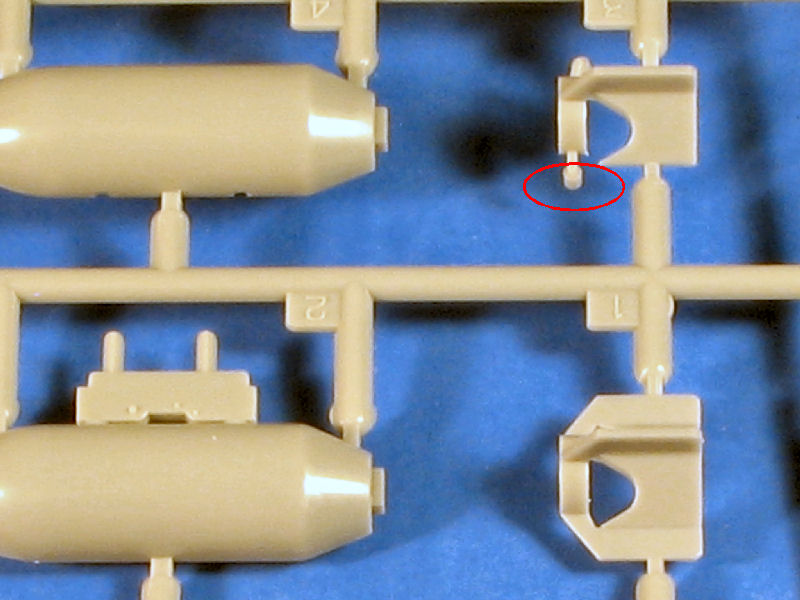 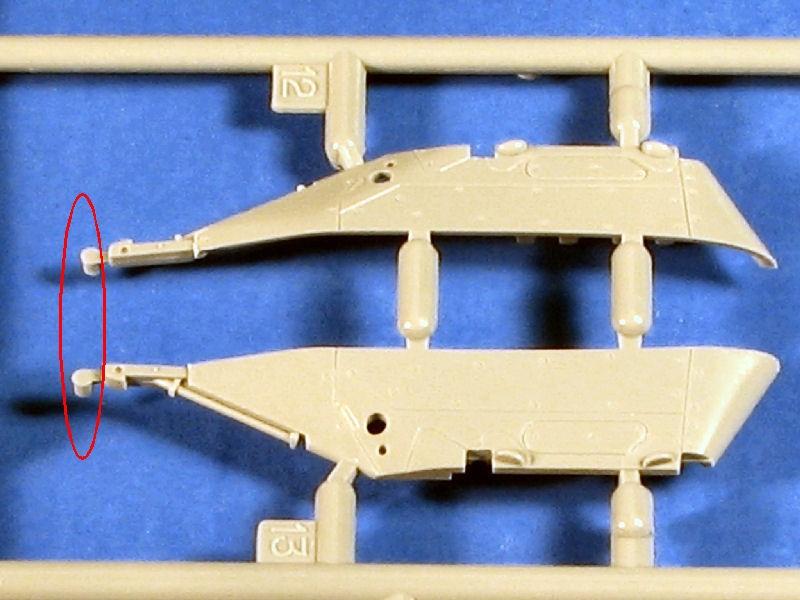 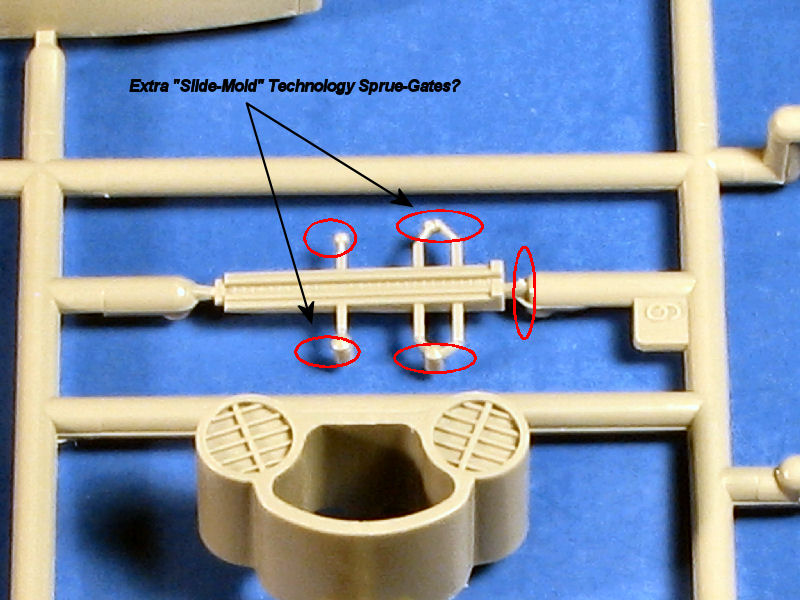 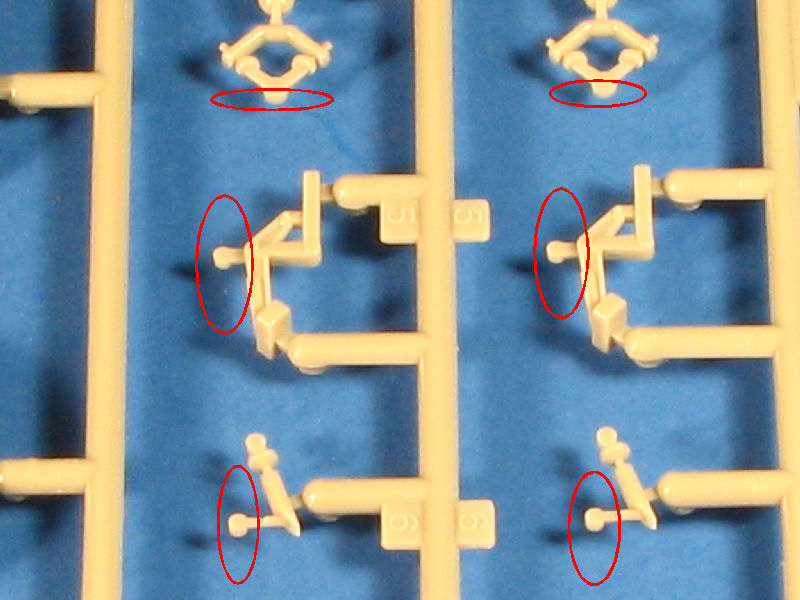 Prior to this sequence, I’d airbrushed the airframe with several light coats of Future floor polish for a primer. That was followed by the laying down of Alclad II Chrome in several light coats. I sealed it under another coat of Future. I realize I don’t have to do that with Alclad II, but I typically finish off my NMF projects with a light buffing of car wax after sealing in the decals. I find that this provides a deep, rich luster you just don’t see on a NMF finish. The decals, so far, have been trouble-free. Micro Set/Sol is all you require. Anything else would be too harsh

Once the major construction was complete, as noted above, I prepared the surface for decaling. The kit’s decals offer three options, as stated earlier; Glen Eagleston’s machine, and two different mounts of Frances Gabreski. While Gabreski’s aircraft is one i don’t yet have in my collection, I decided that my first build of this kit would be of Eagleston’s. Any plane with any form of the Skull & Bones on it anywhere always goes to the top of my list. I have 2 more of these kits, and I’ll definitely build one of Gabreski’s machine at some point.

The perfectly registered decals went down without any troubles, and reacted well to Micro-Set/Sol. I started out using Mr. Mark Softener, but the Future was scarred by it in a few places. I had to go back and re-paint these areas with Alclad II, and had no desire to. I finished the job with Micro-Set products, and had no issues. Once all of the decals were applied and dries, I wiped the model down with a damp cloth to remove any errant decal adhesive, and then lightly sealed them all in with more Future. Over this went a few light coats of automotive wax. 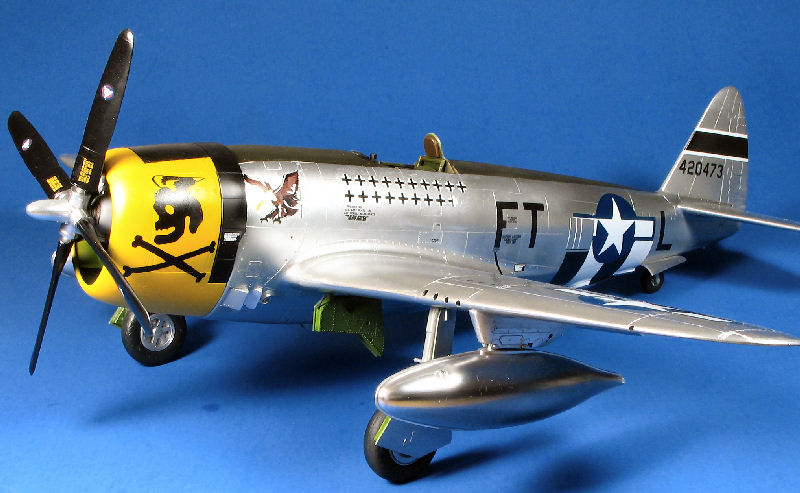 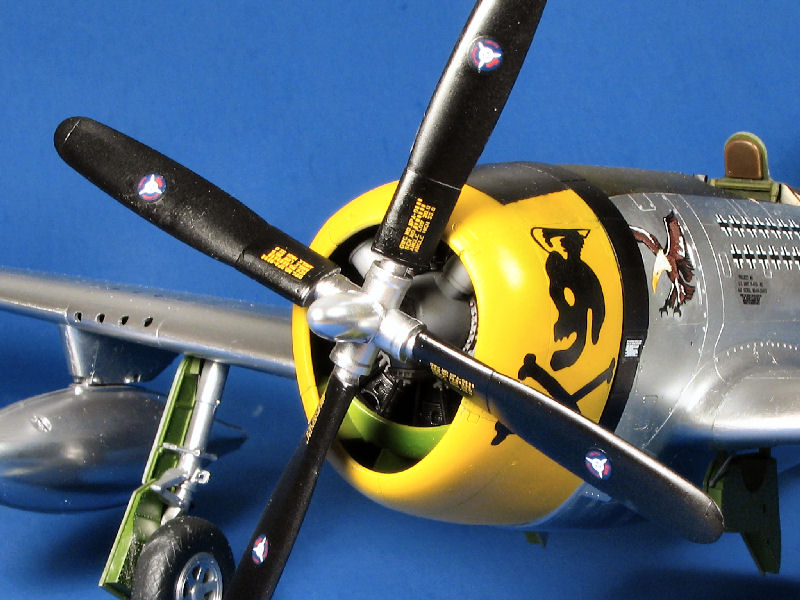 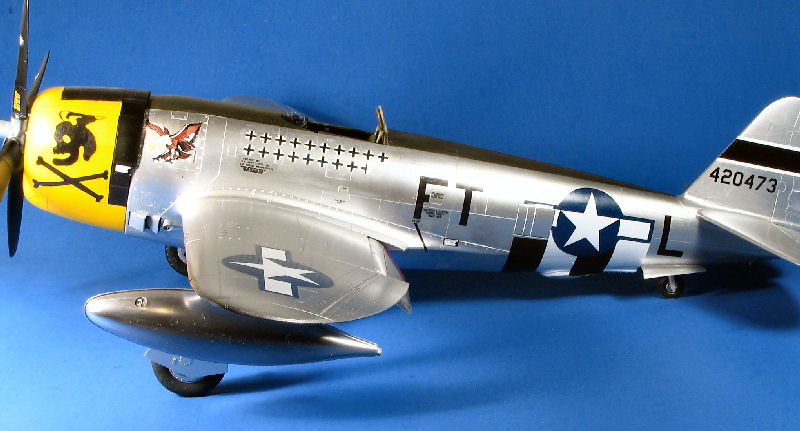 All that was left at this point was addition of the windscreen, canopy, radio mast and pitot tube. Upon completion of the project, I was rewarded with a gorgeous replica of one of my favorite Thunderbolts. Hasegawa has done a fantastic job with this release. They’ve set the standard for Thunderbolts in the large scale. It isn’t perfect, but I have yet to see a kit that is. I highly recommend this kit. 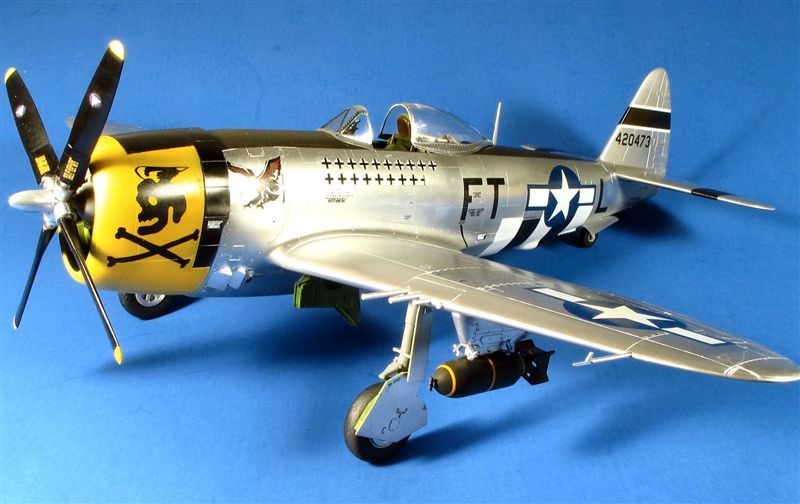 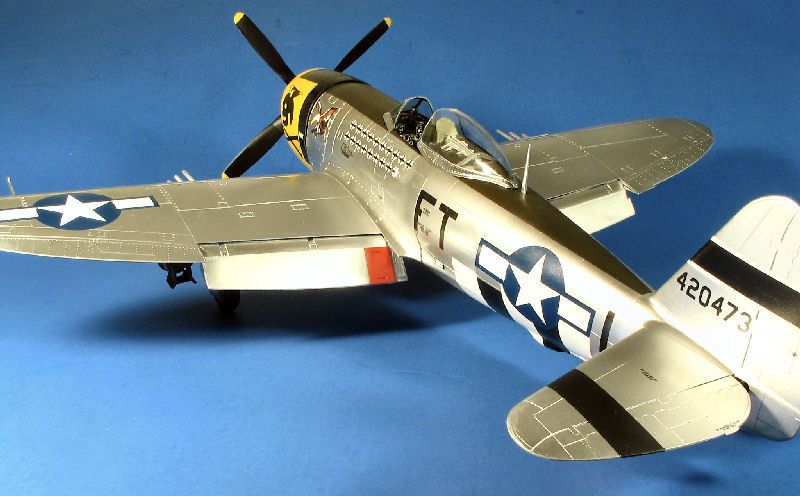 Review sample provided by my wallet.