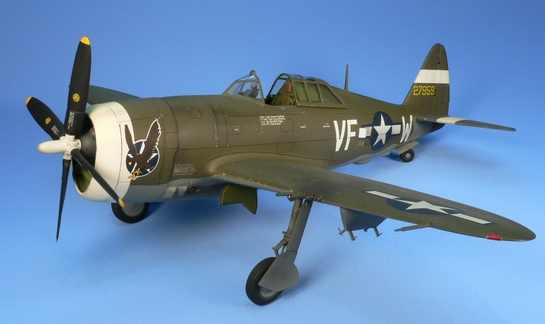 When I finished it in 1992, this model represented my re-entry into plastic aircraft modeling after a 15 year hiatus. I had last completed a plastic aircraft model in 1977, which happened to be a Monogram 1/48 scale B-17. Every model I had built before that time had been 1/72 scale. I can only assume that the ever-increasing scale of my models led me to doing 1/32 scale aircraft. I had dabbled in 1/35 armor, and model railroading is still a passion, but that is 1/87 scale. Now, after another 13 year hiatus, it’s time for more a/c modeling, as I start a Hobbycraft Sopwith Camel. And you thought you were slow… 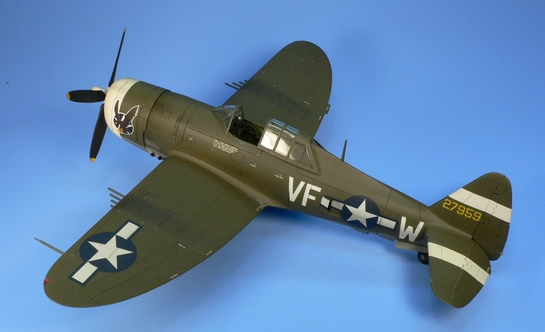 While I do enjoy prototypical correctness as much as the next modeler, I don’t go too crazy. I will use whatever references are available to me, but I’d rather have more fun building than worrying over whether a panel line is in the exactly correct place. I also enjoy fabricating details from different materials. I use a lot of acrylic, styrene of course, metal, and high-density urethane foam (“REN-Shape”). I do use some after-market accessories, as I usually find them to be as much fun as the kit itself.

This is the classic Revell 1/32 P-47D Razorback kit, that I think I bought for about 5 dollars. I always preferred the Razorback to the Bubbletop, as I like its early-forties styling. I recall opening the box and seeing all those rivets, and realizing that I had quite a task ahead of me in scribing panel lines. I sanded all the rivets and panel lines off, and the silver color of the plastic left a ghost of the panel lines that I was able to use as a guide for scribing. I also made several templates from styrene and sheet metal to aid in that task. I used a sharpened piece of stainless steel hypo-tubing for a circular punch to impress fastener-holes at access-panel mounting locations.

The cockpit is detailed with Waldron instruments and placards and lots of bits of wire and plastic. The gunsight is scratchbuilt from bits of RenShape, styrene, aluminum tube and an MV Lens. I have always been very pleased with the way it came out, but in hindsight I wish I had done a better job of shrouding the rear of the panel; I don’t like the black hole behind it. The kit canopy was used, and I even glued a tiny piece of mylar on the rear-view mirror.

The wing guns are brass tubing, but I did not attempt to “straighten” them out. My guns are parallel to the plane of the wing (wrong). The pitot tube is also brass tubing. The wingtip nav lights are heat-formed acetate colored with Tamiya clear red and green. I scratchbuilt bomb-clamps (?) on the under-wing pylons from styrene and bits of wire. The fold-down landing light is from styrene and an MV lens. I angled the flying surfaces at the tailplane, just for the challenge, and added a navigation light from a dot of epoxy to the rudder. The only detailing I did to the landing gear was to add brake lines from some fine wire. I attempted to cut grooves in the tires with the wheels chucked in my motor-tool. I did not know of any after-market wheels at the time. If I ever do anything else to this model it will be to completely replace the landing gear. 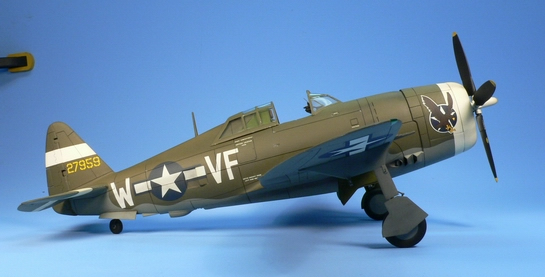 I used Testors Model Master paints and Super Scale decals to finish this ship as Capt. James Goodson's mount from September 1943 until February of 1944 when he switched to a P-51. I liked the Eagle nose art, and another plus was the squadron code on the left side of the ship, VF*W, which pays tribute to all those who have fought our wars for us. I have since found the Fourth Fighter Group website, and the graphics on that site lead me to believe that my stars-and-bars should have the red surround. It was my understanding that the red surround was discontinued in August of 1943, so perhaps my model is correct. Well, it’s correct enough for me. Hope you enjoy it, and if anyone can show this to James Goodson, well, I would be tickled pink to present him with this model.