First allow me to confess that both of these models were built long before Trumpeter emerged onto the modeling scene. I should also note that, were I to attempt either project again, my approach would remain exactly the same despite the availability of Trumpeter's Mk-Vb kit. Indeed, while Trumpeter is to be commended for breathing new life into the 24th scale field, it is truly unfortunate that this rising star failed to capitalize on the many strengths of those kits offered, by Airfix, decades ago. Editorials aside, on with the thumb nail sketch on how I built my models. 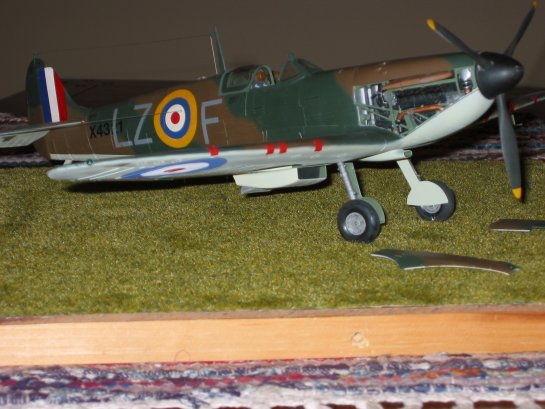 When Airfix first released the Mk-1a, my first attempt at the model was essentially straight out of the box. Despite my enthusiasm of having a model that represented a major step up from Revell's 32nd Mk-1a, I felt that Airfix could have done considerably better with respect to their rendition of the Merlin III. 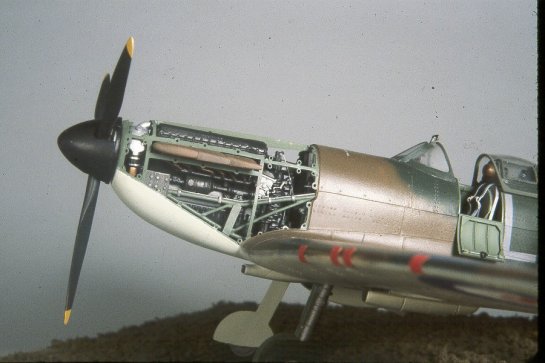 Fortunately, Airfix also recognized their shortcoming and produced a true jewel of an engine in their Hurricane Mk-1a kit. I promptly set about and built a second model, this time using the Hurricane's Merlin as well as its machine guns. In addition to incorporating the Hurricane engine, I enhanced the engine mounts, built a new firewall, added additional plumbing and linkage detail to the engine, enclosed and detailed the voids in each wheel well and spruced up the cockpit. 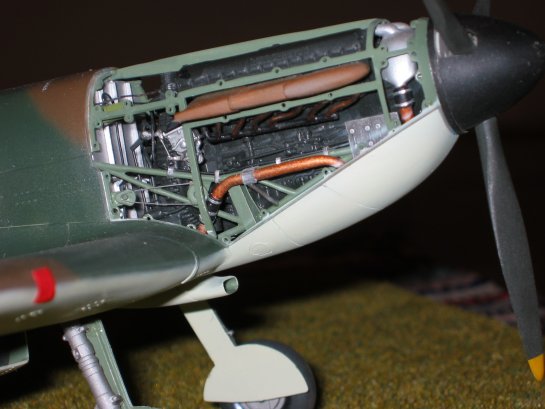 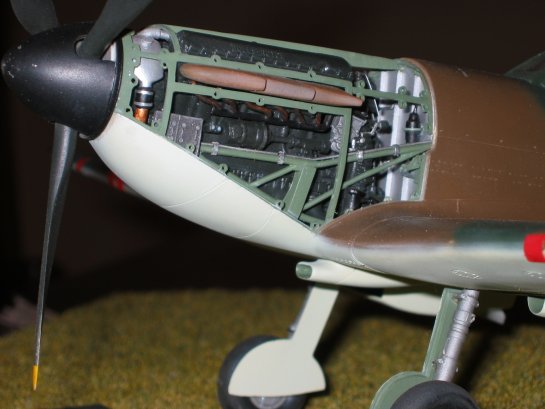 The model was painted to reflect Pilot Officer Bodie's aircraft LZ*F as flown with 66 Squadron during the Battle of Britain. The RAF pilot is from Series 77 which has long since disappeared from the modeling scene. While the model was completed decades ago, I still have it and it still gives me pleasure. 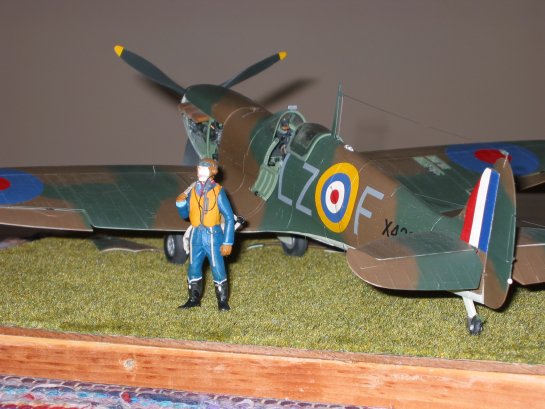 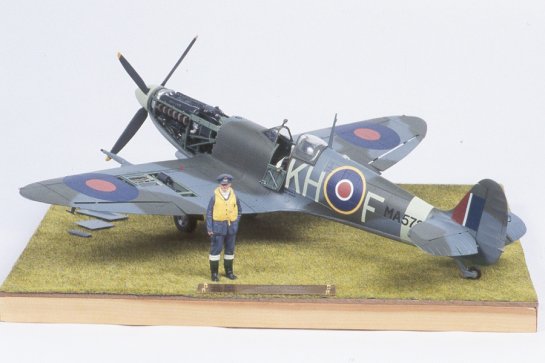 While the Mk-1a is an attractive aircraft, to me, the Mk-IXc is the aircraft, above all others, that captures the essence of a true thoroughbred. Accordingly, early in the '90s, I latched onto the notion of converting Airfix's Mk-1 kit to a Mk-IX and started to nose around to see what could be used to facilitate the project. Like most modelers, I had (still have) more boxed kits than I will ever build and was able to examine the contents of Airfix's Mustang, Hurricane, Stuka and Spit models first hand. After much deliberation, I developed a plan and set about to build a long nosed Spit. Two years later a model of 403 Squadron's KH*F as flown by Godefroy and Beurling emerged from my 'play' room. Why two years? While building models is important, preserving a relationship with my better half is more important. I also elected to photograph the entire project (before the days of digital cameras) with the object of writing a detailed 'how to' article for publication. For those with past issues of Scale Models International (SMI), you can find my article in the Nov and Dec '96 issues. 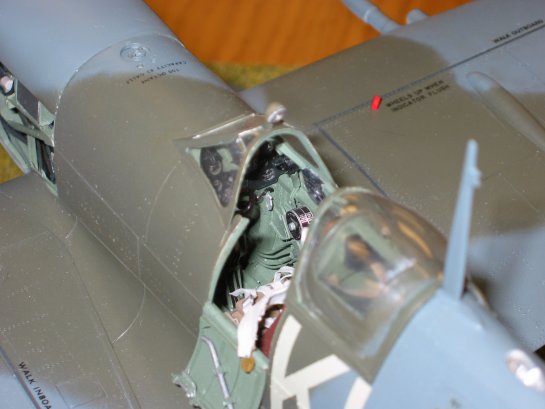 Included at the end of this dissertation is a comprehensive parts list which, even with today's after market industry, is essential should one wish to attempt a similar project. Unfortunately, the listed items alone do not permit a shake-and-bake model. While Waldron products greatly facilitate the IX's cockpit, considerable scratch building was done based on the excellent drawings and photos provided in Harry van der Meer and Theo Melchers' book "Dutch Spitfires - A Technical Study". 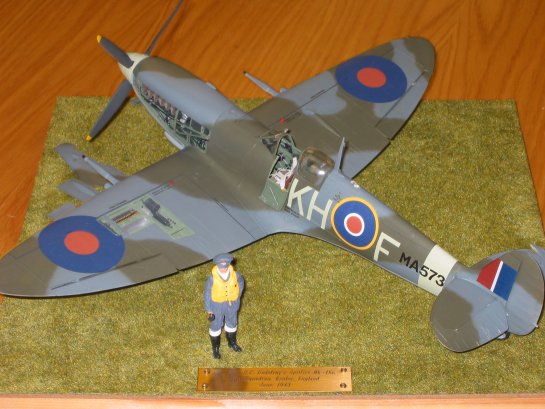 The Mk-1 wings required reworking in order to reflect the increased armament of the MK-IXc and the cannons had to be scratch built. The mix of Hurricane and Mustang engine parts came together quite easily and were detailed appropriately. 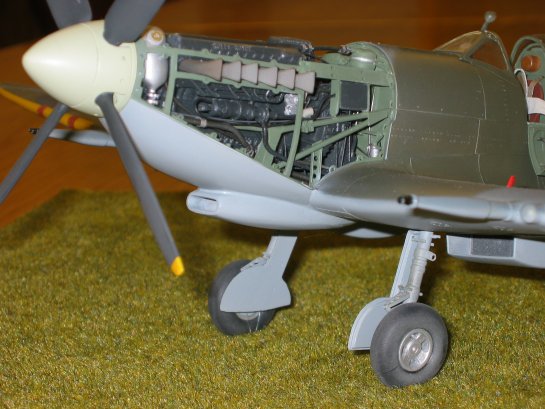 Conversely, I found that building the lengthened engine mounts was probably the greatest challenge. This single structure must be built, not only to hold the new engine, but it must be done such that everything, including the extended cowlings, are in correct alignment while incorporating the required 1.1 cm nose extension. The extended engine cowlings were made by taking two of each of the parts provided in the Spit kit and combining them so as to allow for the nose extension. 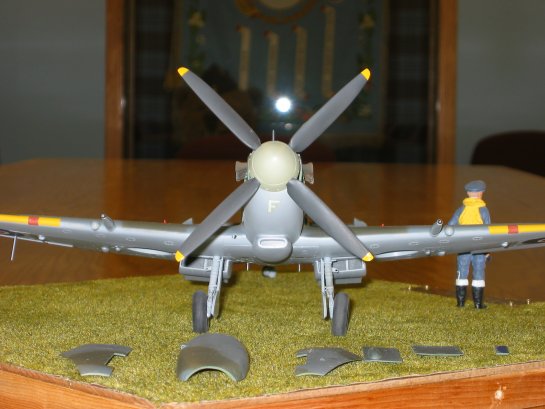 For the four bladed prop, I turned to the Hurricane kit (OK, make that kits) once again. The blades are the correct profile but unfortunately not quite long enough. Each was accordingly sectioned at the broadest point and lengthened appropriately. The Mk-IX spinner is a simple Tamiya putty rework of the Spit spinner, the universal intake a Milliput/plastic card creation, the exhausts a rework of those provided in the Stuka and the windscreen and blown sliding canopy my first attempt at using a borrowed Mattel vacu-form machine/toy. The pilot for this model is that offered by Imrey Risley. 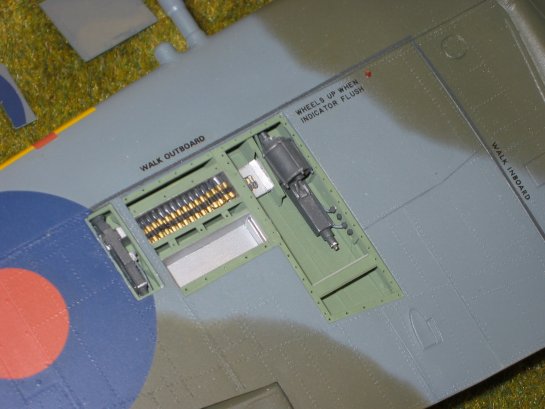 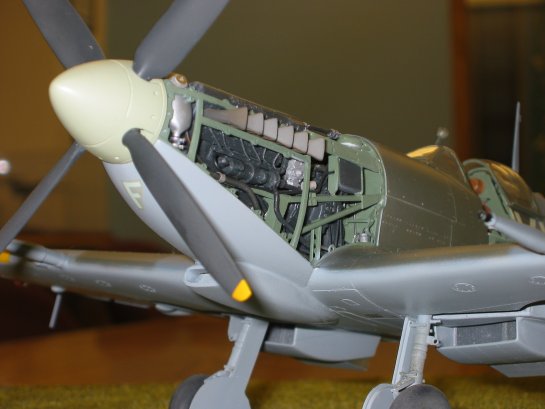 The project may sound difficult to some but really it wasn't. The key element was careful planning and research, which, by far, exceeded the time devoted to the actual construction. I also acknowledge that the project wasn't exactly cheap. As a minimum you need a Mustang, a Hurricane and two Spit kits from Airfix. While a Stuka kit is also required, it is possible to keep it intact as it includes two sets of exhausts. Conversely, should you compare the cost of the Mk-IX project to some of the more recent models released and add on some resin and/or photo-etch sets, you will likely be out of pocket an equivalent amount. The big difference with a project such as this, however, is that the end product is truly unique.

My next Spit project? Probably Hobbycraft's version of Trumpeter's Mk-Vb as flown by 402 Squadron. It will also emulate my Mk-I and Mk-IX as I will again borrowing heavily from Waldron for the cockpit detail and an Airfix Hurricane for that beautiful Merlin and .303 machine guns. As an aside, the squadron colours visible in the background are those of 402 Squadron with whom I am currently flying a military version of the DHC Dash 8.