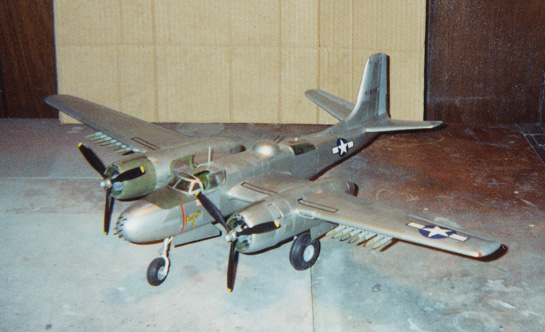 This is the ID kit of the A-26 Invader and when one looks at it for the first time it's really a great kit, of course being vac.

Like all kit's like these you cut out the pieces and sand and shape. I added the strips of balsa to the edges of the fuselage and sanded them to shape. Then after this was done I glued the halves together and let these set up and went to the wings and glued them together and set them aside to dry, super-glue as usual to the rescue.

I decided to make a slip in cockpit which has worked well in the past, after cutting the C model vac piece off the nose I proceeded to take measurements to start making the cockpit tub. Using the Squadron in action book I took the intel from it to get the cockpit detailed. When this was all done and painted and such it was added to the area cut out for it. Added the curved cover over the instrument panel and glued it into place, after this I glued the vac nose into place. One thing, the nose is to small but this was corrected with the help of some bondo and the nose looked great after the bondo had set up and was sanded to shape. 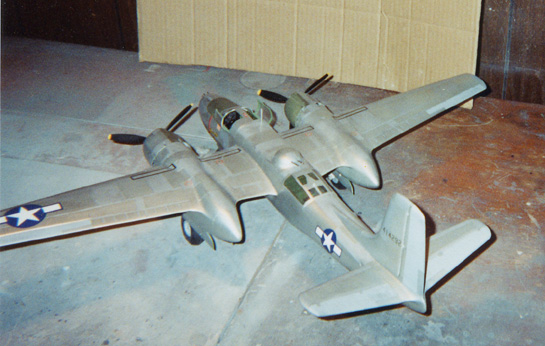 The landing gear was scratched and the tires are all R/C rubber. And after the 26 was painted silver lacquer, I cut the canopy open to give access to judges and the like to see inside.

The wings came next and were treated the same way as the fuselage. The nacelles were then given a reshape due to the fit problem which was miner. The cowls were cut out and shaped and I added the Revell P&W 2800 to the motor mounts that I made from square stock. These were set into place and I added the cowl flaps after the cowls were glued and bondo was added to fill in the miner gaps. Glued the wings on when everything was sanded and filled properly. I used balsa strips for the wing supports to keep the wings from drooping. When they were set in place bondo was used again to fill the gaps here as well.

While the bondo was setting up I went to the tail plane and got those ready to be added to the fuselage, and again bondo was added here also. I let the whole plane set for a couple of days to let everything dry and went to sanding all the areas that had bondo, a lot of sanding here and a lot of sanding there. 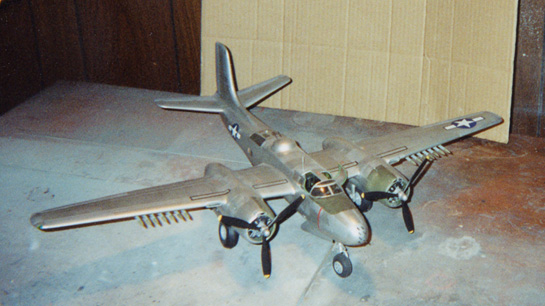 I forgot to mention the rear gunners station that was detailed and covered with the clear canopy here as the same for the canopy over the cockpit. When all was done and when all clear parts were masked off and ready for the automotive primer, I gave it a real good going over and went ahead and shot the primer. The whole plane took about 9 coats, sanding between 3 coats at a time. After this had dried for a week I sanded it down again, wiped it with thinner and a tack rag and painted it with automotive paint, lacquer because it dries fast and is easy to sand after it sets up after 3 days, wet sanding with used wet & dry paper.

When this was all done it was scribed with a needle and added a black water base wash to it and wiped it off after it dried so/so. As I said it's 90% done and all that's left is the ADF antenna, exhaust stains, and antenna wire.

One thing, this is an eight gun nose A/C with the HVAR rockets added to the under wing stations. This A/C was used for interdiction missions out of OKINAWA in '45. I always wanted to do this version of the 26 and it's almost getting there.