Updating a Thoroughbred: Converting The Spitfire Mk Vb to a Mk XIV

The Hasegawa Spitfire Mk Vb is one of those great 1/32nd scale kits that has withstood the test of time. To the best of my knowledge, the kit has been released 3 different times with various decals. Now there is a whole range of modifications available for this kit from Paragon and of course Warbird Productions. This makes available to us the ability to accurately represent almost any late model 1/32 scale Spitfire. Now if only decal manufacturers would sit up and take notice!

The Hasegawa Spitfire Mk Vb is one of those 1/32nd scale models that has been produced that can be built into a nice kit straight out of the box. Overall, the offering accurately portrays the majesty of the Spitfire's graceful lines. The cockpit detail is nicely done and accurately represents the small Spitfire interior which saw little change in its service life. Externally the model has finely raised panel detail which goes to some measure to point out the kits age. Options include different propellor assemblies, canopies and air filter combinations. Unfortunately, 5 spoke wheels are the only items supplied in the kit.

The conversion we are going to discuss here is from a little known cottage industry from the past. I stumbled across PPM Precision Modelworks quite a few years ago in the back of Fine Scale Modeler Magazine. The advertisement was for a 1/32scale conversion kit for Hasegawa's Spitfire Mk Vb enabling the builder to construct a Spitfire Mk XIV or XIX. I immediately jumped at the purchase and was soon rewarded with two truly magnificent resin cast conversion kits. To this day, I still feel that this kit can hold its own against any conversion kit on the market. I chose to build one of the early Spitfire Mk XIVcs flown by 610 Squadron RAF during most of 1944 and early 1945. Gather up your references, scriber, razor saw and lets get started.

Upon opening the box from PPM Precision Modelworks, I was confronted with a maze of resin and white metal parts. The forward fuselage was cast as a single solid piece of resin beautifully scribed. Yes, it is very heavy. More an that later. Also supplied in resin was a new spinner, hollowed exhaust stacks, air intake, underwing radiators, wing gun blisters, vertical stabilizer, rudder and three spoke wheels. The propellor blades, cannons and tail wheel were cast in white metal. As a footnote, the Mk XIX kit included a vacuform photo recce canopy. Instructions and side profile plans in 1/32 scale were also included.

This is the first item to be made and it was basically built straight out of the box. First drill out the spinner to accept a prop shaft for attachment to the nose. The scribed spinner was then painted "Sky" using Floquil paints. Next spray the propellor blade tips yellow and mask when dry. The propellor blade is then sprayed flat black using Floquil paint. Epoxy was used to attach the white metal propellor blades being conscience of blade angle and rotation. The end product is very heavy and very stunning!

Before cutting up the kit the first task I undertook was to scribe the fuselage. While still intact this supplies support to the model during the scribing process. References came from the Aircraft Archive series, Volume 1, published by Argus Books. This excellent text portrays a 610 Squadron Spitfire XIVc in its profiles. After the scribing was completed, the next order of business was to cut off the nose section, vertical stabilizer and tail wheel well as indicated by the supplied instructions. Take your time and measure twice trying to achieve a perpendicular cut on the nose piece. This will save lots of work later. Drill out the resin nose section for the installation of a prop shaft.

The cockpit interior was completed straight out of the box with the only additions being the Sutton Harness made from paper with Waldron buckles. Wire was used to represent some of the various wiring bundles visible in the cockpit. The final addition was oxygen hose supplied by Cutting Edge. The interior was sprayed RAF Interior Green and weathered with a Raw Umber wash. Scuff marks were finally added with Rub n' Buff and a silver artists pencil. Here you will notice that the floor piece extends forward of the advised fuselage cut. Make sure to trim the floor board accordingly as no mention of this was made in the instructions.

Now attach the white metal tail wheel strut to one side of the fuselage as indicated. Glue both fuselage halves together. Attach the forward solid resin nose section. It would be a perfect fit if the floor board was trimmed and a perpendicular cut was achieved on the fuselage. The same goes for the new resin vertical stabilizer and rudder. Now we have a magnificent Mk XIV fuselage.

The first task I undertook was to remove the prominent Mk Vb gun blisters from the top of the wings. The remaining hole is then filled in with .040 plastic card cut to fit. Add the new cannon blisters to the wing as specified in the instructions. The top of the wings are then filled and sanded smooth remembering to remove the wheel well blister that is characteristic of the Mk Vb. Also remember that the Mk XIV had short span ailerons so these items had to be filled and rescribed. With the scribing tool out now refer to your plans and accurately rescribe the Spitfire "C" wing.

The underside of the wing was the next order of business. Remove both underwing radiators for replacement. The Mk Vb cannon blisters on the underside of the wing are also removed. Replace the wing surface with .040 plastic card. Now attach the resin supplied radiators. I used brass screen to portray the radiators screens which were cut to fit. Now fill in the landing light covers and outboard vents. Sand the entire surface of the wing smooth and then rescribe using your plans. Once again remember to scribe the "C" Universal wing.

The white metal cannons supplied by PPM now replace the drilled out Hasegawa items. You now have a completed Spitfire "C" Universal Wing which is attached to the fuselage.

This is the one area that PPM really let me down. The kit came with 3 spoke wheels and no cast metal gear legs to support that extremely heavy nose. You almost have to add weight to the tail to get the kit to sit correctly! Hasegawa supply very fragile landing gear for this kit which doesn't help.

To correct the gear struts I drilled out the center and stuck in pins for added strength. That seems to have rectified the problem. Take your time with the pin vise, its not to difficult. Of course Warbird Productions have recognized this deficiency and supply cast metal gear. Now add gear details made from plastic card and brake lines from wire.

References for the aircraft indicated the requirement for a 4 spoke wheel. Paragon came to the rescue with the announcement of their Spitfire Mk VIII conversion set! I ordered the set which came with the proper wheels. These were then cast and the replacements used on the Mk XIV.

The tail was completed as dictated by the instructions. Remember to correct the elevators to the later variant as laid out in the plans. These were cut off to be dropped to the static ground position when being reattached during the finishing process. The horizontal surfaces are then rescribed as shown in the plans. Finally, add the rudder trim tab actuator made from plastic card. 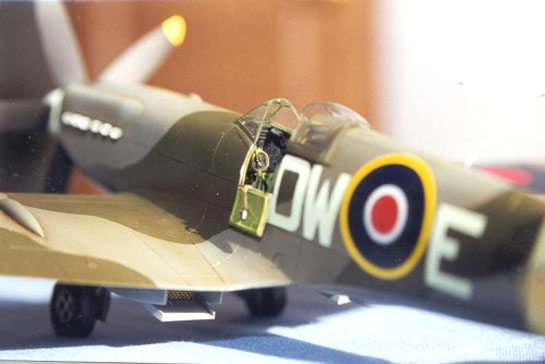 To complete the basic construction add the carb air intake to the nose. The recessed attachment point for the Mk Vb antenna was filled in as the Spitfire XIV had a whip antenna mounted further aft. Fill in all other outstanding seams and sand smooth. Now prime the aircraft to check for any glaring oversights as there has been lots of cutting and scribing going on. The model was then finished in the standard RAF Day Fighter scheme using Floquil paints and a Paashe single action airbrush. The surface was then painted with a clear coat of varnish before weathering with Raw Umber oils. A silver pencil was used to lightly scratch a few panels on the surface.

Now add all the small sub-assemblies to the model such as landing gear, resin replacement exhaust stacks, tail wheel well doors made from sheet styrene, pitot tube, whip antenna, etc. Landing light lenses are model railroad units purchased at a local hobby shop. Choose the proper canopy as supplied in the Hasegawa kit and polish it smooth, paint and attach. Install a prop shaft in the nose section and attach the finished propellor. A beam approach aerial was added to the underside of the fuselage.

To complete the model the roundels were supplied by Hasegawa. Squadron codes were drawn and cut out from a clear decal sheet sprayed Floquil "Sky." This would ensure that the colors of the codes matched that of the spinner. Serial numbers came from Letraset. The yellow leading edge of the wing is cut out from Micro Scale yellow decal sheet.

That completes my 1/32nd scale Mk XIVc conversion by PPM Precision Modelworks. Other than the extremely heavy nose weight I feel it is well worth the investment. Cast metal landing gear would have gone a long way to correcting this problem. It accurately picks up the beautiful lines of the Spitfire XIV. The 5 bladed propellor really underlines the immense horsepower of the Griffon-engined Spitfire and is a real eye-catcher!

For those of you looking for this conversion kit, I do not know what ever happened to this company. I believe it was the only item ever produced by PPM Precision Modelworks. Perhaps the readers could shed more light on the matter.