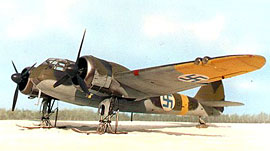 The Bristol Blenheim was a solid product of the mid 1930s. A cantilever low wing monoplane featuring stress skin construction, it was a world class airplane in its day, but its day was rapidly fading by the time WW II erupted. Soldiering on till the end of the war and beyond, it performed a variety of tasks, for a variety of countries until its military career ended May 20, 1958 when a Finnish target towing Blenheim landed for the last time. Several Finnish units flew the Blenheim in hard combat against the Soviet Union's forces, both in the Winter War of 1939-1940 and the Continuation War 1941-1944 and thirty-one were lost on operations. A truce with the USSR was signed on September 4, 1944 and it required the Finns to help oust their erstwhile allies, the Germans, from Finnish territory. The Blenheims were back in a shooting war and another two were lost before operations ceased on March 13, 1945 when the last sortie was flown - an uneventful anti-submarine patrol. Though on alert, no more war missions were flown and the last German soldiers were withdrawn from Finland by April 27, 1945.

Finnish Blenheims were divided into six Series, labeled, oddly enough, I through VI. The break down is as follows:

One Series III airplane was lost during delivery for a total of 97 Blenheims in Finnish service.

My 1/32 Bristol Blenheim model represents a Mk. II of the second Finnish Series. The main inspiration for this project came rather obliquely from a desire for more space to store unbuilt kits. Somehow, I had managed over time to acquire two Revell Beaufighter. The Beaufighter is a big kit in a big box, and I thought that maybe I could use a few parts from one of these to make a Blenheim, and cram the leftovers into the remaining box, thereby gaining a little space. (Never mind that if the want for more space was the driving force, it would have been easier, quicker and probably more fun to have built a few kits "outtadabox". Rationality is not exactly the battle cry of the scratchbuilder!). I also thought that this would be an easy way to build a big Blenheim. Grrrr... As it turned out, I DID painfully extract a set of wings, but pure scratchbuilding would have been a lot less hassle. 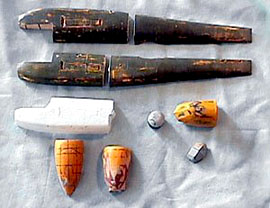 The Blenheim wing was smaller in span, chord, and maximum airfoil thickness. The location and size of the engine nacelles and control surfaces also differed as well as the location of the outer panels which governed dihedral. The only other kit parts used were the cowl nose rings and props, and these were just basically blanks to cut down in all dimensions.

The fuselage, clear parts, and engine nacelles were home made vacuum forms, done in the kitchen using the oven, a shop vac and a crude homemade plywood suction box. The male molds were hacked out of balsa wood. (note: if you want to know more about on how to make masters for scratchbuilt vac models click here) 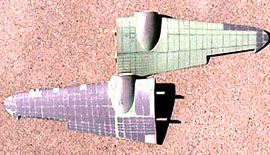 A view of the wing quilting process. The layers of paint can be clearly seen here, and the effect, while subtle, is effective.

A shot of the interior, showing the wooden wingspar box and crew positions.

Tail surfaces were plastic skinned wooden affairs. The landing gear was made from various diameters of wire-cored Plastruct tube and bamboo skewers. The skis were made from a slab of steamed and curved basswood, faced on the tops and bottoms with sheet plastic. I put the airplane on skis because it's a little something different, and also it rid me of the need to go on a torturous wheel-hunting safari. 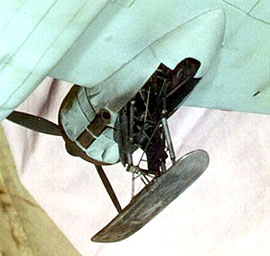 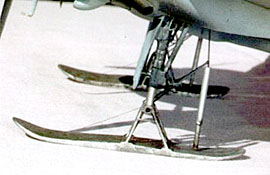 Some photos show special fairings under the nacelles on some ski-equipped machines, but not all. I chose to leave these off because one day, I may find a set of suitable wheels! Interior details were the usual mix of things we're all familiar with - plastic sheet, sprue, Evergreen plastic strips, paper, and wire. 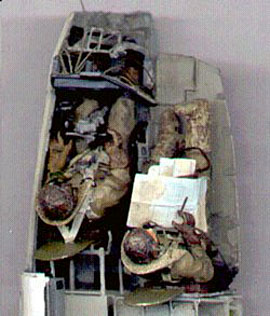 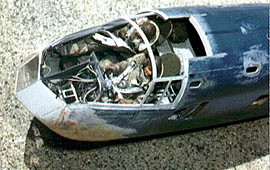 The front office. The crew is bundled up properly for flying at altitude in a cold environment.

A crew was added because despite having a tremendous amount of research material, some areas remained a bit murky, and a crew helped hide my information gaps! These guys were made from Airfix multi-pose sets.

The engines were scrap box items, modified with bullet shaped crankcases and detailed with an assortment of sprue rods. Most of my methods and techniques would be familiar to anyone who has a couple of more involved conversions under their belt. One thing that has to be taken into account in a model of this size is strength. Much internal bracing was added to keep the fuselage from twisting and splitting. The entire central area in the fuselage bottom where the bomb bay would be is a mass of wood blocks, bamboo sticks and epoxy putty to provide a solid heart to support the wing spars.

If I did anything unusual, it's in the external detailing. There is a LOT of surface area on a 1/32 Blenheim, and it would've looked too naked if it was just smoothed and painted. To remedy this, I added the quilted texture, sometimes called "oil-canning", that results from sheet metal being attached to an under frame. First, I drew the locations of all structural members - ribs, spars, formers, bulkheads etc. on the surface with pencil, and then simply hand painted the resultant blocks within the pencil lines. This raised the area around the lines, and wasn't really that difficult or tedious. I spent maybe four hours on the entire airframe, and that's including about three coats. A little sanding followed by a couple of heavy airbrushed coats to blend it all, and the effect was quite realistic. It's a very subtle effect, but when the light is right, it looks just like sheet metal riveted to a framework! (I don't know if this will even show up in the photos). Having done this, I thought I might as well add the other bit of prominent surface detail - the stitching on the fabric covered control surfaces, and so this was done using a fine paint brush and white glue. 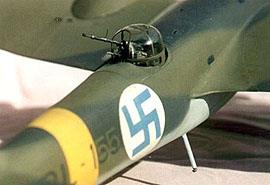 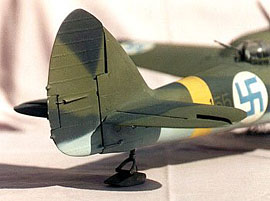 The rear part of the model showing the rudder, rear flying surfaces and the turret.

Fuselage before being glued together.

Once I decided to go ahead with this insanely impractical project, I knew exactly which version my model would represent! Since I've always found the history of the Finnish Air Force to be among the most interesting stories around, and because the long nose Mk IV is more well known, I decided out of some perverted sense of contrariness to make my model as an early all-glass short-nose Finnish example. This presented a few difficulties, chiefly the lack of accurate drawings showing the top view of the nose. I derived mine from a couple of good, almost straight down overhead photos, and with a little empirical playing around with cardboard and tape, the facets all seemed to fit. Another major difficulty was in tracking down which instrument panel would be seen in my Blenheim. I found three distinctly different panels used on Finnish machines, and making a semi-educated guess, based on subliminal clues, I picked one design. 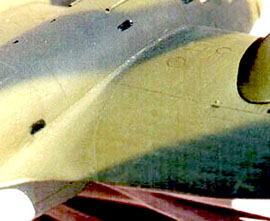 The photo has been lightened and contrast has been added so it shows the subtle effect of the oil canning technique if you study it carefully.

My other quandary was interior color. The British built airplanes kept the standard British interior green color for a long time, but Finnish manufactured airplanes seemed to have some shade of gray. A friend of mine in Finland, Tony Manninen, inquired around and e-mailed the answer - a light gray.

I also settled early on one particular machine, chosen because multiple photographs of it were available, and it displayed a certain "typicality". I wanted my model to represent the "Every Blenheim". Pouring over a mass of photos, I picked BL-155, an airplane with a combat record, and one that survived the war, being cashed out in 1952. When it came time to spray the camouflage, I found that the Finnish patterns were pretty standard, but that some airplanes had hard edged color demarcations and others were quite loose and fuzzy, while some airframes had a mix! This is what I went for - some fuzzy, some hard edged. The yellow areas were hard masked, and home- sprayed decals were used.

I hope you enjoy the photos of my Blenheim. When I started this model I had no plans to ever display her innards, so consequently, very little exists to document her construction progress. I shot a few crude photos for my own purposes, and directly scanned her intimate fuselage contents, and that's about it.

An exact bibliography would be next to impossible, but three main sources stand out: 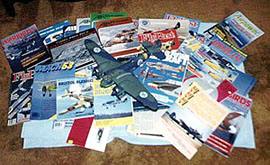 A lot of my sources were just magazines or books that had a picture here or there. When a Blenheim Mk. IV was being restored to flying condition in the '80s, most major aviation magazines covered this work, and lots of skeletal photos taken during the period were available. These were very useful and armed with my other books and magazines, I knew what was appropriate for my Mk.II and what wasn't. Unfortunately, what was also useful was the coverage provided in these same magazines when the airplane crashed in 1985. The cycle started again with the effort to get the beast back in the air, so another round of great restoration material started popping up! To get an idea of what I had gathered, look at the photo of the model sitting on its pyramid of Blenheim Lore!

To Aidrian Bridgeman-Sutton for the loan of materials, and Tony Manninen for obtaining some key information, a big thanks! I couldn't have done it without ya!

This article first appeared in one of the issues of Internet modeler - a virtual modeling magazine.