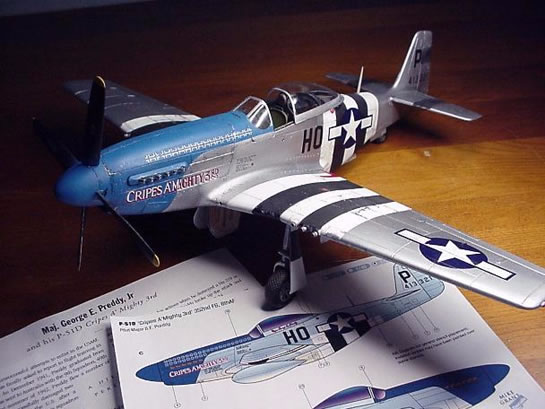 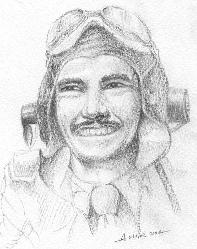 The reason behind building the Hasegawa Mustang was simple, it was a straightforward build, no fuss, no extras and a classic kit with few vices. In essence, something easy and non-Luftwaffe after almost two and a half years of modelling inactivity.

My reasons for building a particular aircraft are based around its historical context and from the outset I intended to model a Mustang flown by Lt.Col Richard E Turner CO of the 356th FS.

Years ago I read Turner's account of his air war over Europe with the 9th AF and decided to one day model his Mustang, 'Short Fuse Salee' in its earlier markings of a blue noseband/spinner and white stars. However a lack of references for this aircraft led me back to Preddy and his P-51 as it appeared around the summer of 1944. (I've since discovered more info on Dick Turner and 'Short fuse salee', isn't it always the way!)

I'd already started building when Rodney Williams' P-51B/D articles appeared on LSP. The level of detail made me realise that I should at least attempt some sort of extra detail work if only to correct the deficiencies in the Hasegawa kit which were now glaringly obvious from Rodney's craftsmanship.

Here's a list of work done in as near as some sort of order as I can remember!

Altered kit rudder pedals and suspended them from rear of instrument panel.

Scratch-built rear fuselage area to include fuselage framing, radio rack and the main fuel cell with vent and filler inlet. 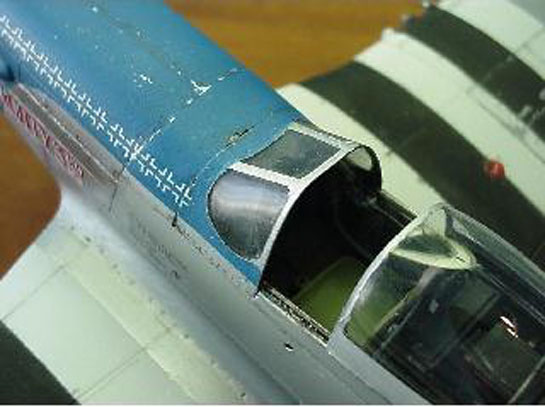 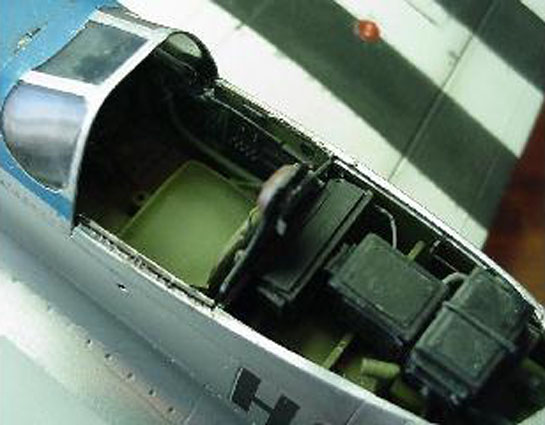 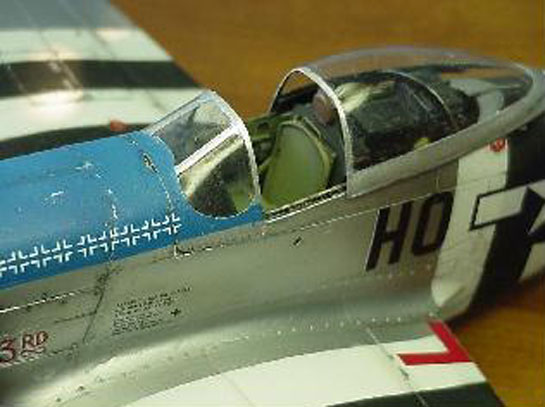 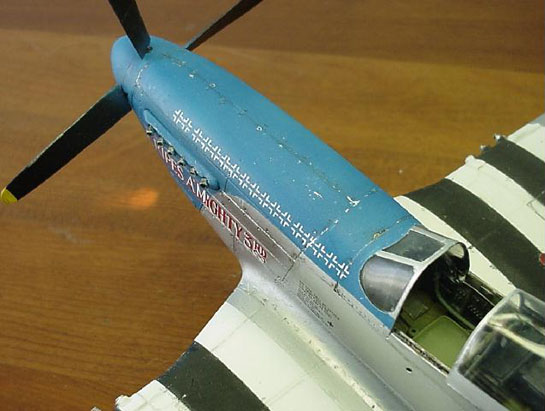 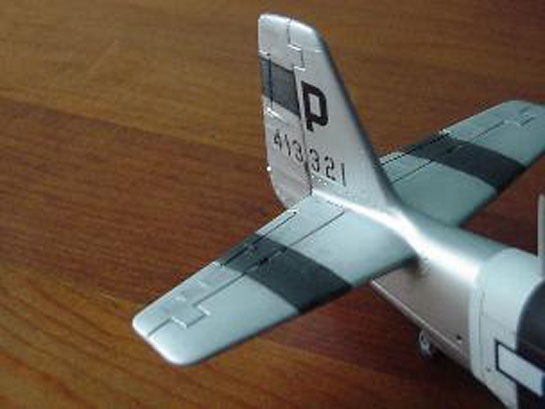 The carb intake breather grilles were sanded away and replaced with sheet metal covers from a toothpaste tube. 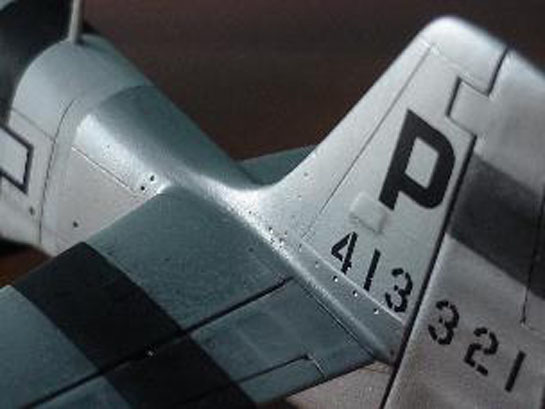 Kit gear bay doors were thinned down and the struts re-profiled as much as possible to get closer to the original's shape.

Pics of -13321 show that it doesn't seem to have the retro fitted metal flying surfaces which popular opinion says all ETO 'stangs must have. Although I was off the hook as far as fitting metal flying surfaces, the Hasegawa fabric still looks a bit heavy and a future note to do something about if I ever build another. 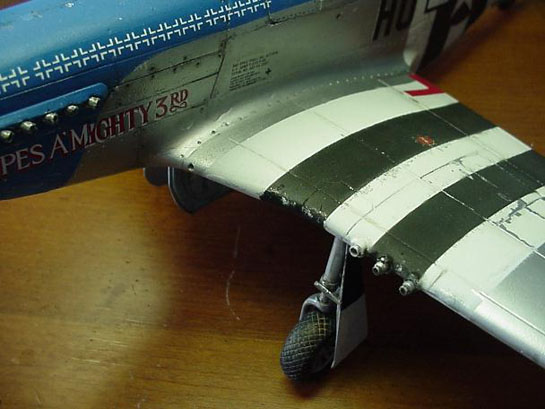 Extras included a Falcon vac canopy which received about five coats of Johnson's Kleer and some internal framing, and a set of Squadron resin wheels which need more work on them in the end than it would have took to build up the kit items…plus they turned out to have the wrong tread pattern for 13321…

I used Alclad II white aluminium (ALC106) as the base aluminium tone, which was applied over a primer coat of Halford's Acrylic auto primer. The primer is a matt base but as I didn't want a super shiny finish I chose to rub this down with 1200 grade wet and dry to give the primer a smooth finish for the Alclad. Initially I used the grey primer, but the effect of the Alclad over this looked too dark to replicate the lighter slightly 'oxidised' look of unprotected alloy panels. So I re-coated with white acrylic auto primer and applied Alclad II white aluminium over the whole model. Various panels were then shaded with other coats of Alclad II (shade A and E) and a homebrew mix of Humbrol Metalizer enamel alloy shades. This gives a nice variety of texture and although not too apparent in the images, avoids the uniform 'silver paint' effect, which is too easy to achieve with some metal paint 'systems'.

Many sources state that Mustang wings were given a clear dope finish to protect the laminar flow properties. This maybe true in some cases but I don't subscribe to this theory and the finish would quickly become worn in service. Close examination of images of 'cripes a mighty' show up tonal differences in wing panels and the surface finish. If you bear in mind this aircraft was flown intensively then the idea of a pristine 'aces mount' starts to seem less likely. Anyway that's my reasoning for including quite a bit of wear and tear to hatch edges and around the Packard V1650's cowling panels. I sharpened a paintbrush handle and used this to burnish edges of panels and to chip away areas of painted over Alclad, paying attention to the .50 hatches, reasoning that these were opened most frequently and were ideal candidates for losing the temporary paint. 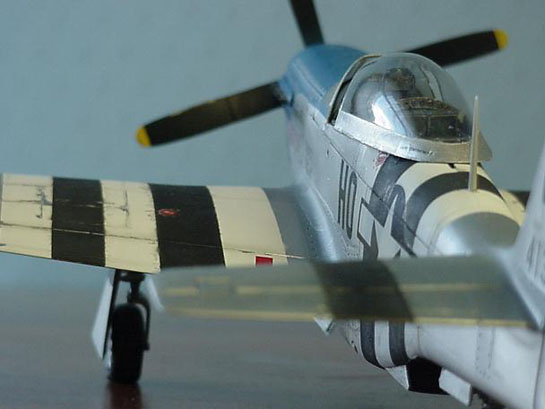 The ident stripes applied for June 6th caused me a headache mainly because I couldn't get the Tamiya acrylic black to stick to the Alclad. Eventually an old tin of Humbrol coal black acrylic did the job and it doesn't look too 'black' into the bargain! (I also used this on the thinned out prop blades.)

This was a happy accident when I discovered that the stripes were almost certainly hand painted in the field a fact supported by an image in the Osprey Aces book showing the misalignment of the upper and lower stripes on the starboard wing leading edge.

Before I started to apply the stripes and the blue nose, I used Tamiya smoke to post shade panel lines. I diluted it and added a little black and sprayed at low pressure just to pick up the engravings and areas of detail round the wing roots.

That blue…well Mike Grant's decal sheet recommends Testors French Blue or a Floquil USAAC Blue23. I'm not sure about these colours in comparison to pictures of -13321 published in the Osprey Aircraft of the Aces Book 1. Its difficult if not impossible to determine colour from a monotone image, but what you can do is balance the tonal values against other known colours in the image to get an idea of the tone. The images on p74 and 75 of this book do give an idea of the lighter tone of the mid blue in comparison to published colour pictures of Bodney Mustangs in the Roger A Freeman book 'The Mighty Eighth in Colour. I ended up mixing a Revell gloss blue enamel with an old tin of French blue and added a touch of white to get the shade shown here. I thinned it with cellulose thinners to get a quick drying and near matt sheen. For some reason my Sony digital camera doesn't like blue and the real colour is actually a lot richer. Post editing could probably have given a truer value for the blue, but then this is cheating?

Decals were by Mike Grant and superbly thin, so thin that the nose art decal of Preddy's favourite saying had me angst ridden with worry over applying the separate black outline decal over the red/white lettering. Mike's sheet has been reviewed on LSP before and needs no other endorsements as it comes with a detailed synopsis of Preddy's career and a historical breakdown of how his aircraft markings altered during late 1944. Main national markings were from an old Superscale sheet. All of the above were applied with a few drops of Kleer brushed onto the surface of the kit to aid adhesion. The Superscale decals in particular reacted well to this.

Last bits and pieces included brushing a tan wash into the tyre treads (shit always gets into the treads not onto the surface!), as Bodney was a grass field using PSP for hard standings. Also a wash of dilute Tamiya smoke for coolant/fuel stains around the radiator area and into moving panel lines and that's about it. 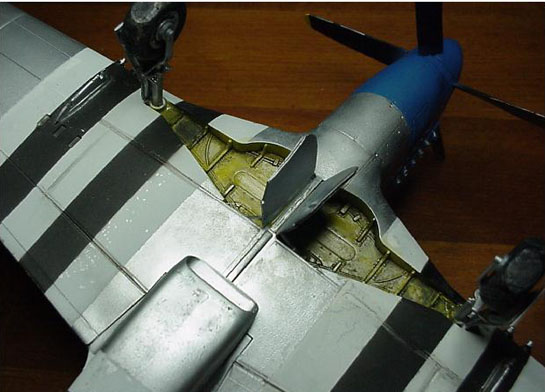 Apart from a few details such as drop tank sway braces, brake lines, a harness and the wheel well landing light which disappeared into the black hole of my hobby room, its more or less finished. One item not missing is the canopy to fin antenna wire, which as pictures and Mike's decal instructions suggest, 352nd FG aircraft didn't use. 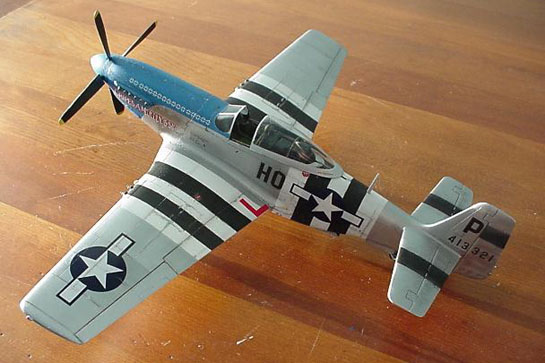 It's not the definitive Preddy Mustang by a long way (or any Mustang for that matter!) but then that wasn't my intention. I wanted a fair representation of a famous aircraft and its equally famous pilot, I think I got this far and I'm happy that its good enough to take its place beside a full size Packard Merlin V1650-3 in my local museum.

It's worth remembering that being the best doesn't come with any guarantees. Major George E. Preddy Jnr was shot down and fatally wounded by friendly ground fire whilst chasing Fw 190s over the Ardennes forest South west of Liege, Belgium, Christmas day 1944. His Brother William also an 8th AF pilot was killed in action in April 1945. 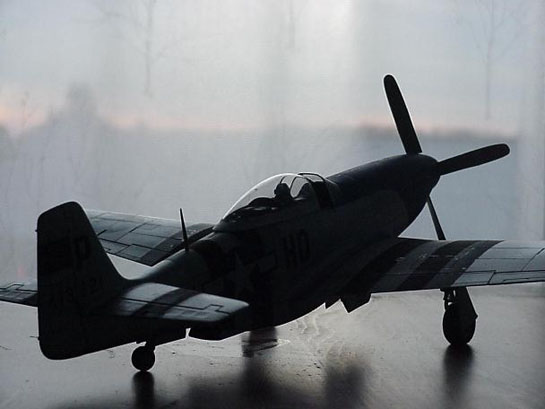 As a post script, Dick Turner went on to fly Sabres in Korea before a back injury sent him home, if anyone has any info on his other North American mount, I'd be very interested. After watching Robert Mitchum in the movie The Hunters, which contains some superb aerial photography if some less than superb acting, I feel the need to add an '86 to the collection. 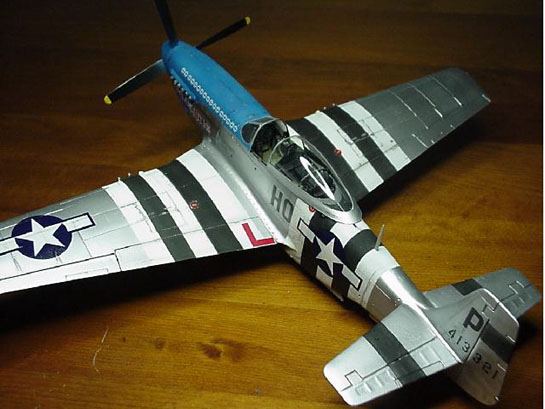 And all the people including Mark, Chris, Brad, and Mike at LSP for the help with the Preddy Mustang. Cheers!