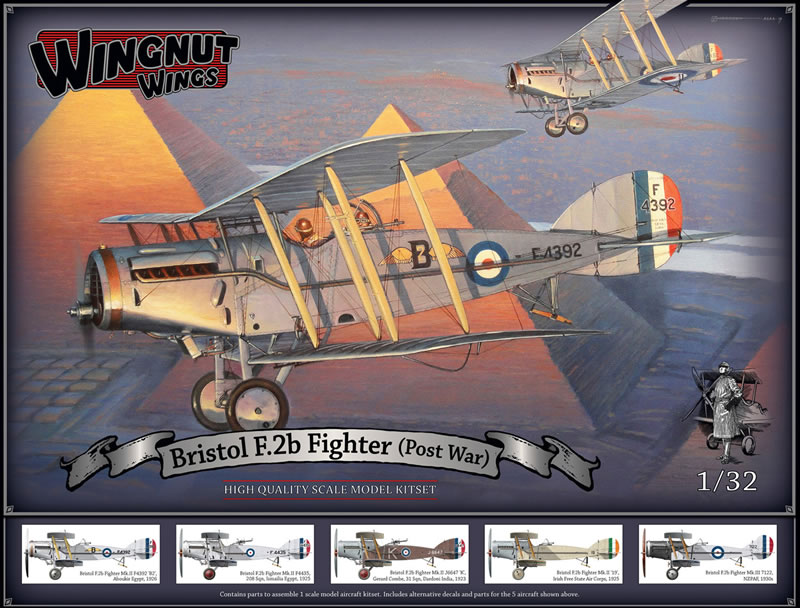 We are pleased to announce out latest release:

This is the long awaited follow up to our original First World War era 32004 1/32 Bristol F.2b Fighter model that we released in April 2009. The Bristol Fighter saw extensive service post war with the RAF and in Poland, Belgium, Ireland, The Netherlands, Peru, Mexico, Canada, Greece and New Zealand. Post war modifications were numerous and included modified engine cowlings and radiator slats for improved cooling, longer exhaust manifolds, an auxiliary 'tropical' radiator, modified instrument board and a larger balanced rudder (as featured in this model). Some very late serving aircraft could also be found with variable pitch propellers, a larger horizontal tailplane and leading edge slats on the top wings (not included in our model). The Bristol Fighter was not withdrawn from RAF service until April 1932 and remained in Commonwealth service until it was retired by the NZPAF in 1936.

Be sure to check our website hints & tips in case there are any important corrections etc to the instructions.

All our models and accessories are available direct from our website www.wingnutwings.com with payment by credit card or PayPal and through some specialist retailers.

If you have any questions, comments or suggestions please let me know at richard@wingnutwings.com.