Information supplied by B-25 Factory Times 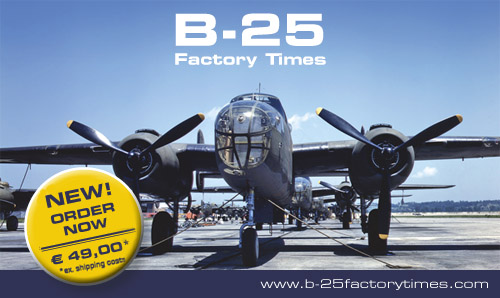 Illustrated history of the North American Aviation plants at Inglewood and Kansas City and the B-25 assembly lines.

Wim Nijenhuis was born in 1953 and lives in the city of Deventer. His profession was in housing corporations. As a young boy, he was an enthusiastic plastic modeller. Wim was founder of the eastern chapter of IPMS-Netherlands, co-founder of the first Special Interest Group within IPMS-Netherlands and for several years chairman of IPMS-Netherlands. Although he was born after the Second World War, the airplanes of the war had his interest. He has specialized in allied bombers of World War Two. He has built mostly all of the U.S. and British bombers, all in 1/48 scale injection models, but also several vacuform models like the Armstrong Whitworth Whitley, Handley Page Halifax and the Short Stirling. Although he likes all the twin and four-engined bombers, his favourite aircraft is the North American B-25 Mitchell. For many years he has collected many photographs and much information about this airplane and he is now known as a B-25 expert.

He has written many articles about the bombers in Dutch modelling and aviation magazines. In 2011, he published an illustrated English-language non-commercial study about the B-25 in its post-war role in front of the camera as a movie star as well as the camera ship. It consists of the volumes Catch-22, Hanover Street and Camera Ships. He has also contributed to the profiles of the B-25 in service with the Royal Netherlands East Indies Air Force. These are publications in the “Dutch Profile” series. A series of Dutch airplane types that served in the Dutch armed forces. Finally, he also make oil paintings of WWII bombers.

A completely new book about the production of the North American B-25 Mitchell. The B-25 is a medium bomber of the Second World War and was used in large numbers by particularly the United States, the United Kingdom, Canada, the Soviet Union and the Netherlands. The B-25 was developed at the beginning of the war and was used in the period from 1942 to 1945 above practically every war zone. The B-25 was still in use until long after the war. The B-25 was in service with many countries and has seen, even in peacetime, almost every corner of the world and is, therefore, one of the most famous bombers from that period. Nevertheless, very little has been published about the factories where the B-25 was produced and the manufacturing process itself.

Never before in this way has attention been paid to the manufacturing of one of the world’s most well-known airplanes. Supported by many photographs, this book gives a picture of the origin and history of the factories and the assembly of the airplanes. It shows how many thousands of workers daily worked at the plants assembling this famous plane. They were the unsung heroes and without them a victory at the front would not have been possible. Among them were also many women who, owing to the high labour demand, went to work in the factories in increasing numbers. In addition, the book gives a brief overview of the countries where the B-25 has been in service, as well as other relevant facts relating to the production of this airplane.

North American Aviation Inc. played a leading role in the development of mass production. It was an airplane factory that stemmed from a holding company founded in 1928. One of the important pillars of the holding in the 1930s was the Fokker Aircraft Corporation of America of the famed Dutch Anthony Fokker. During the second world war, North American Aviation built in its three factories in Inglewood, Kansas City and Dallas more than 41,000 airplanes, more than any other American airplane manufacturer. Of these, almost 9,900 were B-25 Mitchells. After the war, the company in addition to airplane construction, was also active in space and atomic energy. After acquisition by Rockwell, the company merged with the large Boeing Company in 1996.

Grandson James Kindelberger Graham has written a striking foreword in this book. He says: “Many hundreds of fine books have been written about the “warbirds” of World War Two, dealing with the specifications, design fundamentals and flying characteristics of each. Many more have dealt with the brave men who flew and fought in them. But in “B-25 Factory Times”, author Wim Nijenhuis has finally brought forth a volume which celebrates the talented men and women who designed and produced the airplanes that helped turn the tide for the Allies. It is the story of not only the gifted engineers who used their talents to design and constantly improve the plane, but also the manufacturing specialists whose efforts resulted in ever more efficient ways of producing it, as well as the ordinary civilians who, by the thousands, worked in the defense industry for the first time in order to make a paycheck and help win the war.

With meticulous research and many contemporary photos not seen in years, “B-25 Factory Times” is a compelling and most readable testimony to the incredible contribution, born of necessity, with lives at stake every day, made by the men and women of North American Aviation during the Second World War.” according to Kindelberger Graham.