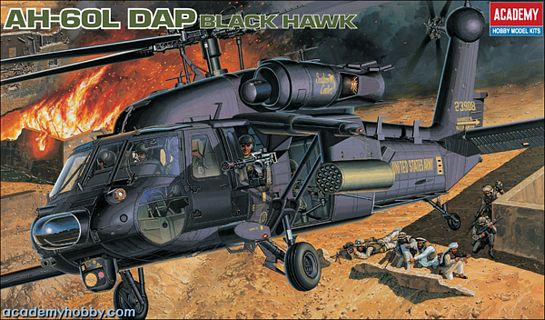 If I'm completely honest, helicopters hold very little interest to me in general, the American Special Forces (in modelling terms) hold even less interest to me. So my wife looked at me more than a little strangely when I happily bounced into the apartment with the very large Academy DAP Blackhawk kit under my arm. Just why this is so, will hopefully become plain as the review proceeds.

Somalia brought the Blackhawk to the general public's attention, especially after Ridley Scott's film, "Blackhawk Down". But the Blackhawk nearly 30 years old and first saw combat in Grenada and has made appearances in every military operation the United States has been involved in since. It is perhaps one of the most recognisable military helicopters in the world with its' unusually sleek form belying its large size.

In military context it is used by most branches of the United States Armed Forces as well as by many other countries. The Australian Army uses a very attractive three colour camouflage scheme on its Blackhawks for example.

This is third in the series of Blackhawk kits that Academy has produced in 1/35th scale. It is a mark of how popular this market has become when both AFV Club and Panda have brought out rival Blackhawk models in the same scale.

The kit comes in a sturdy box with separate lid sporting a scene of daring-do as AH-60L "Southern Comfort" flies over American Infantry fighting shoulder to shoulder with Afghani fighters.

The sprues come separately bagged and there are seven of them for your entertainment; six in light grey plastic and one for the transparencies. Each is replete with finely engraved detail, which to me at least is just represented just about right - not too heavy, not to light.

Sprue A contains the fuselage, interior floor and ceiling as well as the wheels, business end of the IFR probe a tapered elevator and some other small parts. The parts are crisply molded but there are some small bugbears for me at least. In the cockpit door window frames there is a sprue with quite large connectors, you'll have to be careful cutting it away. In addition on the tail boom there are some lugs for the Chaff Dispensers. If you don't intend to install the dispensers, you'll need to very carefully cut and sand these away. It's nothing major at all it just bugs me.

Sprue B contains the doors, rotors, and engine panels. Sprue C is the transparencies, whereas D covers the cockpit and gunners seats, rear landing gear and winch unit. Sprue G contains guns, IFR probe, non-tapered elevator, cockpit fuel tank and the analogue instrument panel. Sprue K is almost exclusively weapons, Stub Wings with single points and the digital instrument panel. The weapons options here are AGM-114 Hellfire's as well as 2.75 Inch Rocket Pods. The final sprue is almost a complete waste of time. Out of 75 parts, you only need to use four. The twin point ESSS stub wings, 250 gallon tanks, additional troop seats etc., are all not needed for this variant.

All in all the kit is nicely done and broken down and well worth a quick fondle.

By comparison to say the 1/32nd scale Hunter from Revell, the decal sheet is extremely, but covers most of the major stencils and tiny artwork for two variants of the DAP. One is BU 26365 "Southern Comfort" whilst the other is "Razors Edge" which has no serial number at all. The colour for the decals is predominantly yellow and are (at least on my sample,) perfectly in register.

Since I was lucky enough to get the kit, I've been wondering what markings to do the kit up in. The reality is that there was only ever one choice, the S-70A of the Hong Kong Government Flying Services.

If you came to Hong Kong, the Blackhawk (until last year) was a familiar sight especially if you lived in the New Territories. Before the handover, the Government Flying Services bought two Sikorsky helicopter types, the S-76 and the S-70A. The two Blackhawks VR-HXI and VR-HXJ (The prefix changed to B after the handover) were painted in a very attractive two-tone gloss grey and were fitted with the Pinocchio radome. They brought a huge range of capabilities to Hong Kong, from Police Airlift, anti-smuggling operations, Illegal Immigrant patrols, Medevac, SAR as well as fire fighting in the mountains where wheeled fire engines found it difficult to access. The GFS Blackhawks served the people of Hong Kong very well and thanks to the crews of these choppers; many locals and mainlanders owe their lives to the S-70A and their crews of the GFS.

The Hong Kong Blackhawks offer four different marking choices and a real mish-mash of options, which the DAP kit provides for. Although part of the disciplined services of Hong Kong, which includes the Police, Fire Brigade, Prison Service etc., the Hawks were ostensibly civilian birds. This fact makes the HIRSS Infra-red suppression System on the exhausts therefore quite unusual until you consider the Anti-Smuggling operations that they carried out with the Hong Kong Police Force. The Triad and Snake Head smugglers they were up against are well equipped and can operate very happily by night. In conjunction with the BAe Jetstream aircraft the GFS flies, for longer-range surveillance, the HIRSS assisted the GFS to place Policemen at exactly the place to effect arrests.

In the cockpit however the instrument panel is analogue and not digital, but this is catered for on existing sprues. In addition the main cabin needs to be reorganized from the layout in the kit. The seating layout is as per the attached diagram: 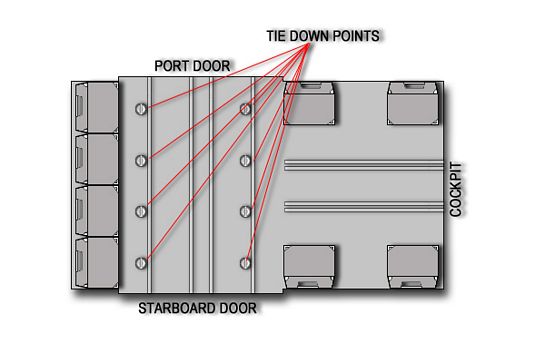 The four seats across the rear bulkhead are canvas and metal framed with the x-frame supports; you'll have 10 unused seats of this kind to choose from on Sprue L. In addition the seats forward of the main doors are of a slightly different construction. I think looking at the kit parts; it will be possible with a little tissue paper, white glue and stock rod to produce these without much difficulty.

Another noticeable thing that will have to be changed is the floor of the main cabin. There are eight prominent tie downs between the doors, which are not present on the kit part. Nor are the equipment rails on the floor, the layout of which is shown on the diagram above. (This change will need to be effected no matter which version of the Hawk you want.)

The one thing that will have to be scratch built is the FLIR pod on the port landing leg assembly. Different sized round plastic tubing will be all you need to complete this.

The conversion itself will be remarkably painless and offer you a unique Blackhawk to display. For more information, go to the GFS photo gallery, which has some nice walk around photos:

Not being a chopper fan, I still have to give top marks to this model, (perhaps others can more clearly point out pitfalls,) but for me she's a honey. The range of options you get in the box without recourse to aftermarket suppliers is phenomenal as is the quality of the parts. Perhaps the greatest compliment you can give the kit is the fact that it's now made me want to do other choppers, the Westland Super Lynx, the Eurocopter Cougar and the venerable Westland Wessex when someone comes out with them.

Should you decide you want one too, then they are available from LuckyModel.com who kindly provided this one for review.