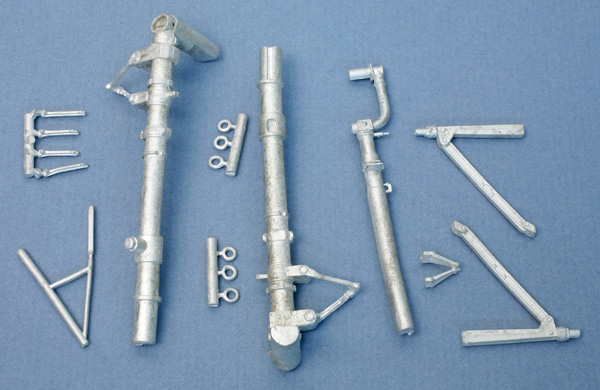 A recent release from Scale Aircraft Conversions is this accessory set for the new 1/32nd B-25 series of kits just now being released by HK Model. The set includes the main landing gear and the nose gear in white metal.

This set is simply meant to be a direct replacement for the kits plastic landing gear, providing the modeler the option to go with white metal instead of plastic. Therefore, while the casting is quite good, details are unchanged and any defects of the kit parts, such as molding seams, are reproduced on the SAC gear. The only difference between the two is the SAC gear has the tie down rings separate from the main gear. There will be some additional preparation necessary as some parts will need to be straightened. 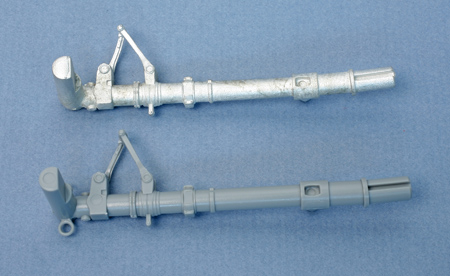 My main concern with this new gear is the softness of the alloy used. I am not sure it would be any stronger that the kit plastic gear. The main struts are quite hefty, about the same diameter as a typical section of sprue, and I would think could easily hold up the kit’s weight. The weakest part in either case would be the nose gear as the offset of the arm carrying the axle is quite small in diameter. It will be quite easy for the kit gear to snap off at this point, while the SAC gear easily bends at that same point. The difference is the SAC gear can be bent back while there will be more of an issue with repairing the plastic gear. The only saving grace is there should be little stress on the nose gear as the B-25 will be a tail sitter without some added weight to even make it sit on its nose gear. I guess it comes down to the brittleness of the kit plastic parts versus the ductility (softness) of the white metal SAC gear. Both should carry the weight of the kit, but I am not sure which would be more likely to sag over time.

I am not sure what kinds of alloys are available for this type of casting, but I wish SAC would use something with a higher bending strength. If they did, I would not hesitate in recommending the set. As it stands now, I would only recommend this set as a quick and relatively low-priced replacement for a broken set of kit gear.