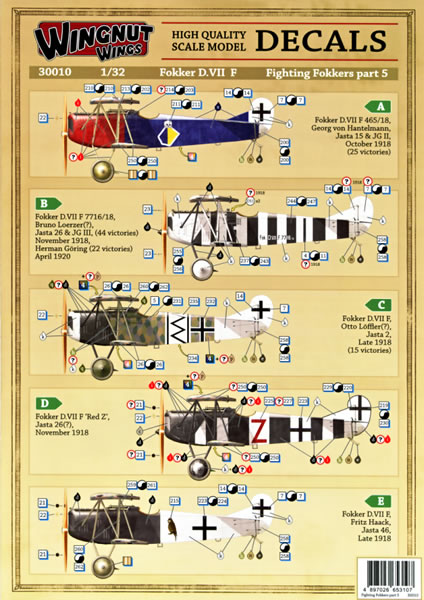 By now most modellers will be aware of New Zealand firm Wingnut Wings (WnW) and its magnificent range of World War One kits in 1/32 scale. What is perhaps less known is that the company also has a small range of aftermarket decal packages available. This range was extended in fabulous style in late 2012 with the release of not one, but four simultaneous releases for their Fokker D.VII kits.

Since that time, Wingnut Wings has also extended its Fokker D.VII series of kits by releasing a BMW-engined D.VII F kit, and an accompanying decal package: 30010: Fighting Fokkers part 5, which is the subject of this review.

The image at the top of the page shows the included four-page booklet, which is presented in the same style as the instruction booklets in the company's kits. The front cover features profiles of the five markings options included, with each profile doubling as a decal placement guide for the fuselage markings. 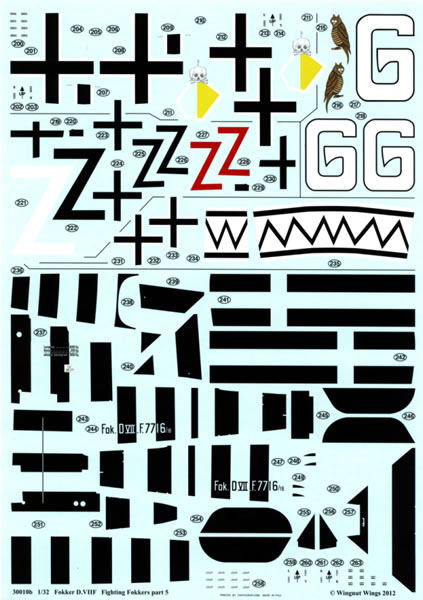 Printing of both sheets is by Cartograf, and they are glossy, crisp and in perfect register. All but the tiniest of the stencils is legible under the appropriate level of magnification. To the naked eye they look a tad thick on the backing paper, but not as thick as, say, Tamiya's kit decals. I for one am sure they'll be fine if applied with the requisite care.