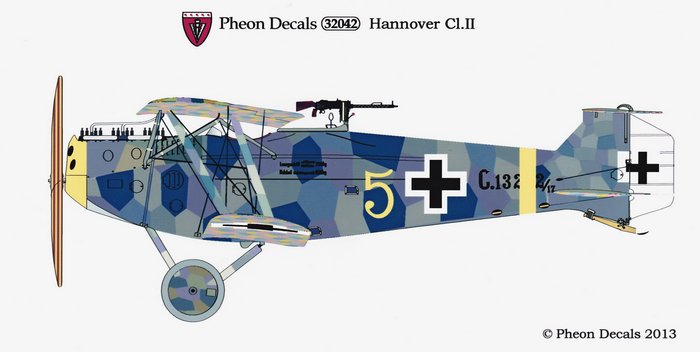 Pheon Decals will be well known to most WWI modellers by now. I love that sense of excitement when a package from Tremesay, France arrives in the letterbox. Pheon’s decal sets never fail to impress.

I well remember building the Airfix Hannover kit in 1/72 when I was a teenager, and agonising over the printed camouflage fabric finish and markings for only *one* aircraft. Now that the superb Wingnut Wings is out, building it will be a pleasant trip down memory lane with a lavish choice of markings.

In this release there are markings for *twelve* Hannover Cl.II aircraft: 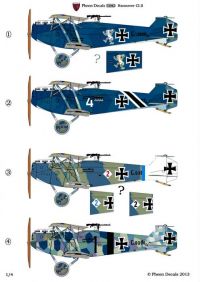 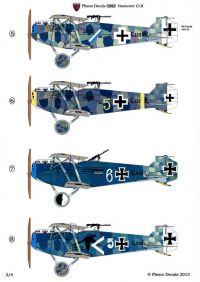 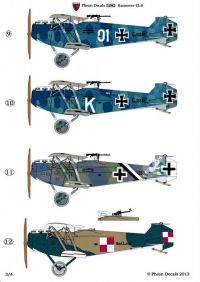 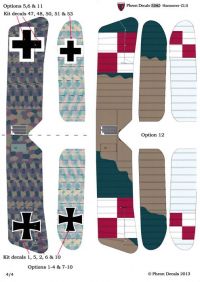 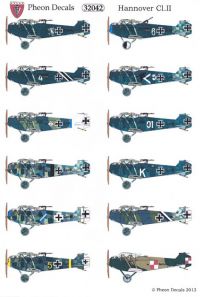 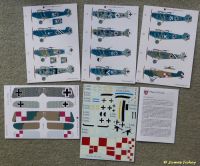 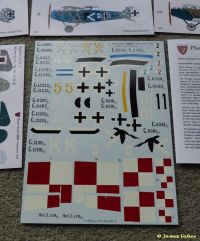 Rowan has been scrupulous with his selection of Hannover markings, a number of interesting options were passed over as they belonged to the virtually identical Hannover Cl.IIIa.

The late Dan-San Abbott had promulgated the view in his “Schlachtflieger!” book and on The Aerodrome forum that the upper flying surfaces of the Hannover Cl.II were covered in the light 5 colour lozenge (usually reserved for the underside) and that the under surfaces were covered in clear doped linen, not 5 colour lozenge. I do not recall any hard evidence for this view but it is interesting that the photo on page 27 of the WNW instruction booklet and page 11 of the Datafile shows no lozenge shapes on the underside. Fabric covering for the Hannover Cl.III and Cl.IIIa were of the normal dark & light lozenge patterns according to Dan-San.

Things that Could be Improved

Only a small nitpick, it’s all good really. The larger polygons on the fuselage should have softer edges, but as Rowan points out in the instruction booklet, the artwork in the Wingnut Wings instruction booklet may better illustrate the appearance of the various possible fuselage finishes.

Only available directly from Pheon Decals via email. Note that although Pheon Decals’ website is still under development, their new email address is now operational: pheon@pheondecals.com and is preferred (the old email address will also continue in operation for a little longer).

Sabine notes that delivery to the USA is being delayed by additional security check by Homeland / Customs, adding sometimes 3 weeks to the 2 it normally takes.

As the P&P takes into account weight, Pheon will prepare the order send the invoice with the correct P&P.

While not as colourful as the German fighter markings, the German two-seaters did sport a variety of unit styles and individual markings, of which Pheon have provided an excellent selection.

For those modellers wanting to finish their WNW Hannovers in something a bit different, then this set is just the ticket. I love the quality of Pheon’s decal sets and am sure modellers will find this one inspirational for building the Wingnut Wings kit.

Thanks to Rowan Broadbent for providing the decals for this review.