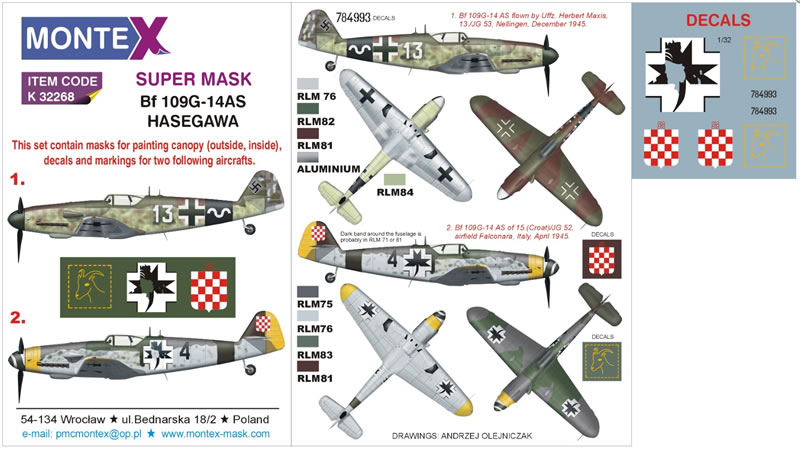 Almost as if sensing a recent discussion on LSP about Croat Bf 109G-14AS “Black 4”, or the imminent Group Build on “Captured or Foreign Colours”, Dariusz Korczyński from Montex Masks has released a mask/decal set for this particular aircraft.

Black 4 (Bf 109G-14/AS) and Black 10 (Bf 109G-14), were part of a group of Croat fighter pilots who deserted to the Allies in the last stages of WW2. After breaking away from a routine patrol, Nar. Josip Cekovic (Black 10) and Nar. Vladymir Sandtner (Black 4), made for the Italian Penisula, crossing the coastline in the vicinity of Ancona. Cekovi landed his Bf 109G-14 at Jessi airfield, where it was inspected by the 3 Wing SAAF based at this airfield. Although few photos exist of this aircraft after its surrender, it does appear that it briefly wore SAAF markings over the Croat insignia.

Sandtner chose to fly on to Falconara airfield and surrender to the USAF. A fair number of photos exist of this machine following its capture. The full details of the exploit by Nar. Josip Cekovic and Nar. Vladymir Sandtner are detailed in Jacek Jackiewicz’s book “Captured Me 109’s” published by Atelier Kecay. D’Amico and Valentini provide useful details on the 109 “AS” variants in their book “ Camouflage and Markings of the Aeronautica Nazionale Repubblicana”, published by Classic Colours. A further useful source on identifying AS engine aircraft is Lynn Ritger’s 109Lair. 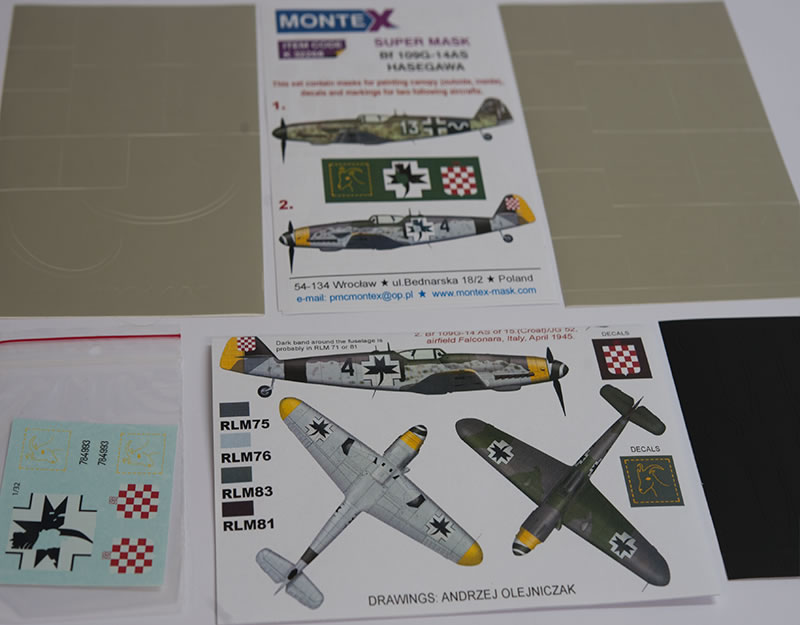 The set is typical of Montex Mask sets, consisting of 2 large vinyl sheets with aircraft markings, a smaller black vinyl sheet with canopy masks and an additional decal sheet. This sheet includes the yellow rams head that decorated the side panel of the cockpit, as well as a weathered Croat marking. The other markings cover a Bf109G-14/AS “white 13” with very attractive mottle.

I really look forward to using this set, and would like to thank Dariusz for the review copy.