For literally decades there has been the need for a 1/32 scale Pratt and Whitney R-2800 kit. Engines and Things, as well as Teknics both released nice kits of this engine in 1/32 years ago, but newer technology and casting techniques have opened up the possibilities and now Contact Resine has stepped in to offer two of their own versions, one for the earlier engines, and one for the late models with their distinctively different reduction boxes and magnetos. 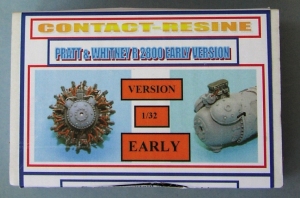 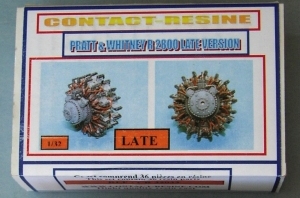 The two kits are identical, down to the 2 page color instruction sheet, except for the blocks. These are cast with the reduction boxes molded-on, so in the early kit the softer domed reduction box is offered, and in the later version the more cylindrical box is featured. 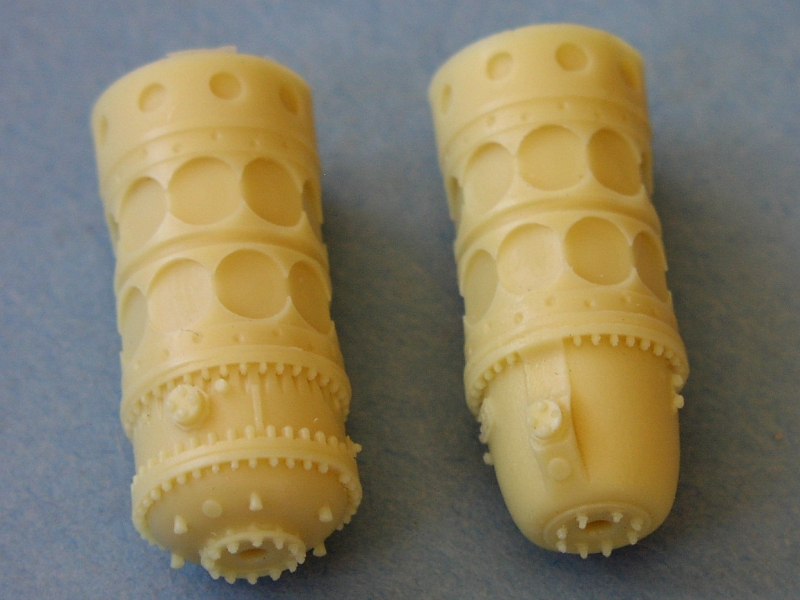 The kit contains 36 resin parts nicely cast in tan resin, a substantial coil of brass wire to be used for the various sections of wire needed to dress up the engine, and the two page color instructions. There are no parts included for fabriction of the push rods. 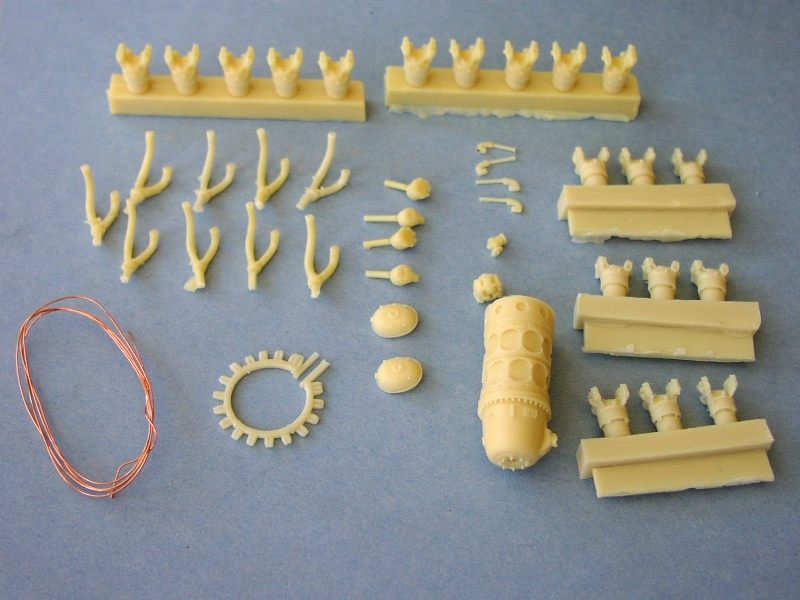 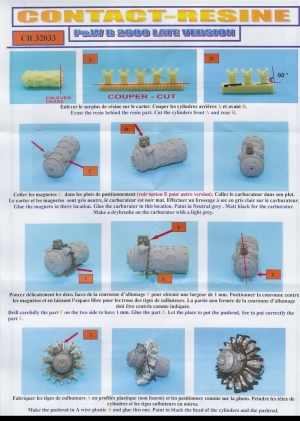 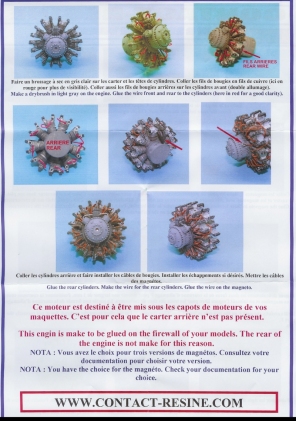 The set features very nice details, is well cast throughout from excellent masters. While the substantial blocks are cast without flash at all, some of the other parts will require minimal cleanup. The instructions are clear and well presented so preparation and assembly look to be straight forward.

The R-2800 was the USA's first 2,000 hp aero engine and was produced from 1939 through 1960. It's most noted use was on many WWII era aircraft, most notably the F6F Hellcat, F4U Corsair, P-47 Thunderbolt, P-61 Black Widow, A-26 Invader, and B-26 Marauder. Through it's lifespan the engine went through numerous updates which brought changes in the look of the magnetos, reduction housing, and other details. Contact Resine's offerings give the modeler a full range of these details to accurately represent almost every version of the powerful Pratt. 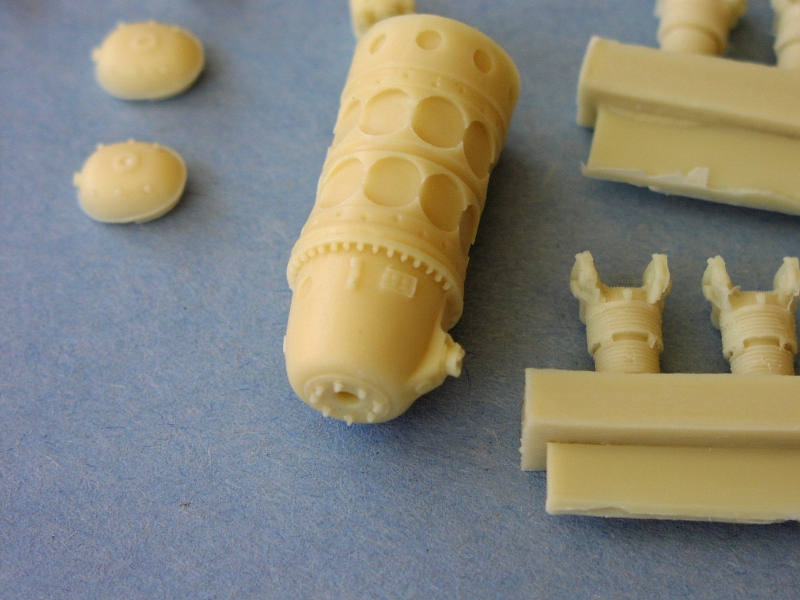 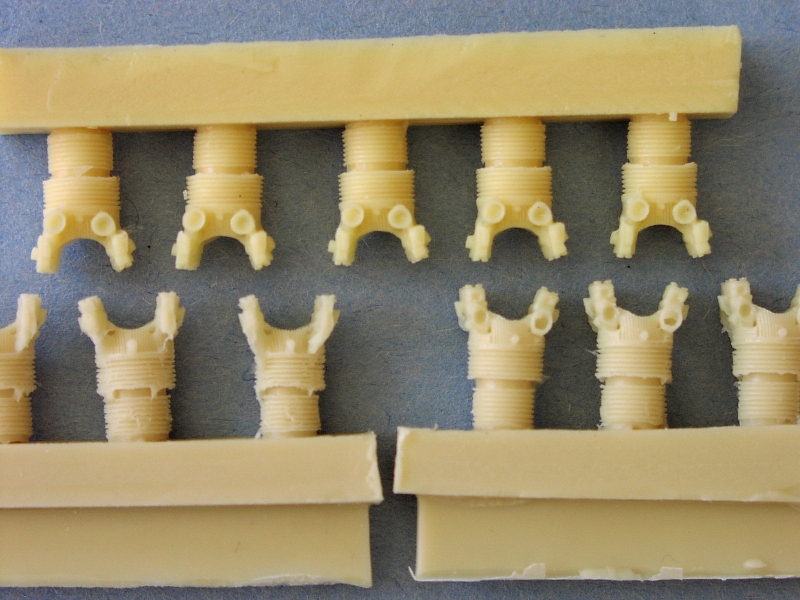 It seems a strange choice to offer two separate kits though, seeing as how Teknics offered both reduction housings in their single kit. This approach offers a bit more flexibility but would require that the block and reduction housing be cast separately. Another drawback is that there is no detail, or parts at all, aft of the block offered. The instructions plainly state that the engine kit is to be mounted on the firewall of your aircraft kit, and that no rear detail is provided.

None the less, this is a fine kit and the attention to detail is excellent and is highly recommended. With the announcement of the Redux 1/32 P-47 and the news that Contact Resine will be supplying the kit's resin details (including the engine) it is not shocking that Contact Resine is also offering the R-2800 kit as a stand alone item. Your old Revell Jugs are a prime kit for this addition, your Trumpeter or Revell Corsairs will love this engine, and your Hasegawa Hellcat will benefit greatly as well. However be careful in selecting which version of the R-2800 you will need. The later version with the more cylindrical reduction housing was used on only very late war aircraft including the F4U-4. P-47 N and M, and the A-26 Invader.

Conact Resine's 1/32 R-2800 early and late versions are available through Design and Marketing International and retail for $27.65 USD each.

Thanks to Design and Marketing International for the review samples.