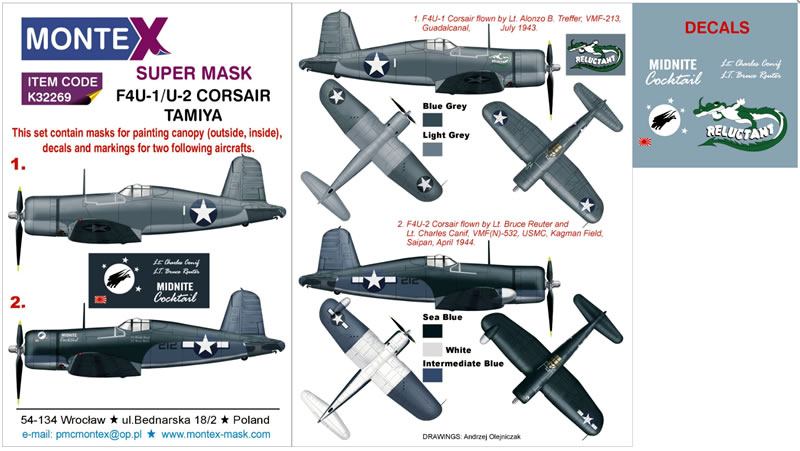 Ever since I saw the evocative painting by Don Greer of a US marine corps F4U-2 Corsair Nightfighter downing a Mitsubishi G4M Betty bomber on the cover of a Squadron Signal publication, I’ve longed to build a model of “MIDNITE Cocktail”. This dream can now come to fruition with the release of the excellent Tamiya F4U-1 “Birdcage” Corsair, a suitable resin conversion set by Mike West from Lone Star Models and a mask/decal set for this particular aircraft by Montex Masks.

The aircraft in question, #212 of VMF(N)-532, normally flown by 1st Lt. Charles Canif, was part of the Marine Corp group that was transferred to Ella Island on 7 Jan.1944, following the invasion of the Tarawa Atoll. Their task being to intercept nocturnal nuisance raiders, a mission not without mishap or hazards; as experienced by Maj. E.H. Vaughan, who was almost downed by friendly Flak following failure of his IFF system.

Lack of effective long-range radar systems and means of successfully vectoring the fighters of their bogeys meant that close-encounters with enemy aircraft were much of a miss-and hit affair, and in Feb. 1944 the group was transferred to Roi on the Kwajalein Atoll, without any successful intercepts.

It was here that they teamed up with Air warning Squadron 1 (AWS-1), who had the necessary long-range radar units and vectoring skills. It was thanks to this collaboration that VMF(N)-532 scored its first and last kills of the war. This happened on 14 April 1944 when a group of Betty bombers staged an attack on Engebi, a neighbouring airfield, and 5 marine F4U-2 fighters were scrambled to intercept. Of these, Lt. J. E. Donner scored the first probable kill, but had to bail out of his stricken aircraft when it was damaged by return fire. 1st Lt. E.A. Sovik made the first confirmed kill following successful vectoring to a bogey. This was followed almost a minute later when Capt. Howard W. Bollman, flying 212 “MIDNITE Cocktail” also destroyed a Betty bomber.

The engagement was not without loss for the marine side, as Lt. D. Spatz became disorientated and lost following an erroneous vector signal from a Navy unit.

In addition to MIDNITE Cocktail, this set includes markings for a F4U-1 “Reluctant dragon” flown by 1st Lt. Alonzo B. Treffer at Gaudalcanal in 1943. 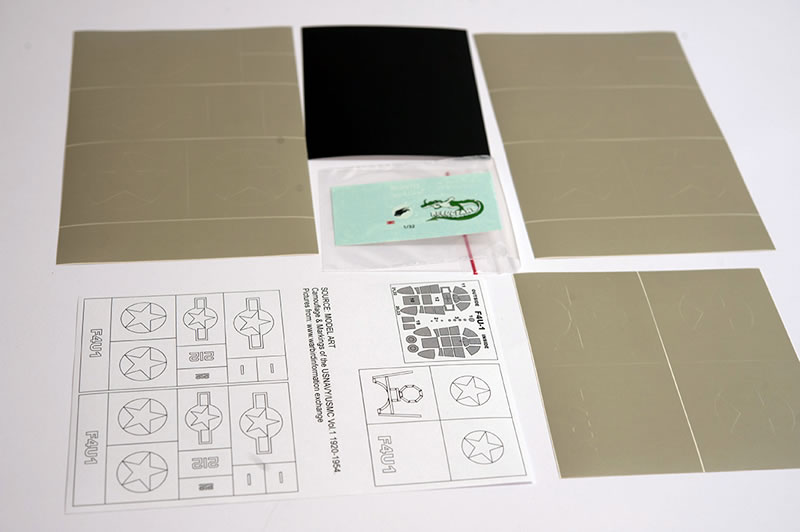 The set is typical of Montex Mask sets, consisting of 2 large vinyl sheets with aircraft markings, a smaller black vinyl sheet with canopy masks and an additional decal sheet.

I really look forward to using this set, and would like to thank Dariusz from Montex for the review copy.

A very useful resource on this topic is Night Wings, USMC Nigh Fighters, 1942-1953 by Thomas E. Doll, Squadron/Signal Publications, available from Amazon.