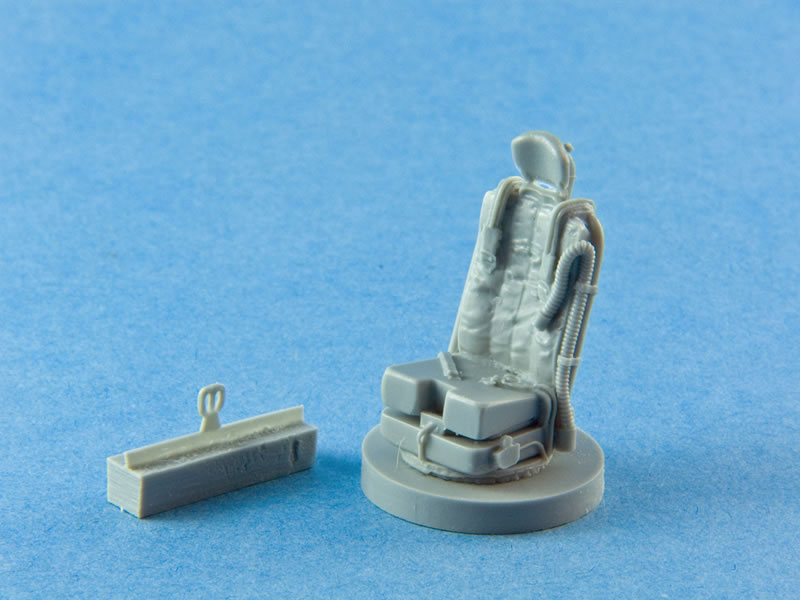 The A-1 Skyraider has been a popular item on modelers’ 1/32 wish list. In the past year, we have seen three kits by two manufacturers released to fulfill those wishes. Zoukei-Mura released their super-detailed A-1H early in 2013 and Trumpeter followed with an AD-4 and more recently, their own A-1H. Indications are that an A-1J will follow in short order from both companies. Parts are included in both A-1H kits for the later variant. One of the key differences was the installation of an ejection seat known as the Yankee seat. While the parts provided in the kits are passable, Cobra Company has released an exquisite drop in replacement that represents the seat much better.

The Cobra seat is cast in one main piece with seatbelt detail included. A second block provides the ejection handle. The fabric quilting, headrest, oxygen hose and seat cushion detail are all very well-rendered. The seat has been engineered to fit in either the Zoukei-Mura or Trumpeter kits with minor modifications that are clearly described in the instructions and well within the capabilities of the average modeler.

All in all, this is a nice little update set that will allow the modelers wanting the later variant to make it happen a bit sooner. The Trumpeter kit has almost all of the other necessary parts already on the sprue. Also, two navy squadrons outfitted their A-1Hs with Yankee Seats, VA-25 and VA-152, so you can use this set with appropriate markings to make your kit a bit unique.