Pheon Decals | Decals for the 1/32 Wingnut Wings Salmson 2A2

History: The Salmson 2A2 (courtesy of Kenneth Munson)

Designed as a 2-seat 'heavy' observation aircraft, the Salmson 2 was of conventional appearance except that its tailplane had neither a fixed fin nor a horizontal stabiliser (all moving rudder and elevators). It was a good looking aeroplane, with a rounded fuselage and a distinctively louvred cowling for the radial engine and the equal-span wings had double ailerons. The Salmson 2 went into production towards the end of 1917 and entered service with the French Aviation Militaire in early 1918 with the military designation 2A.2. It became one of the more successful French types of the later war years with 3,200 built, and it served with twenty-two French escadrilles on the Western Front and two others in Italy. 750 Salmsons were purchased by the A.E.F. as an interim type pending delivery of the DH-4A ‘Liberty plane'. Eleven squadrons of the A.E.F. flew the Salmson 2 during the final months of the war.

The duties assigned to the Salmson 2 were primarily those of visual and photographic reconnaissance, the rear cockpit having a trapdoor in the floor for the aiming of cameras. The aircraft could carry two dozen small fragmentation bombs for ground strafing, and was occasionally used also as a light day bomber. Forward armament consisted of a single synchronised Vickers machine-gun mounted slightly to port on top of the engine cowling; some American machines were later fitted with Marlin guns instead. A Scarff ring in the rear cockpit could mount single or twin-yoked Lewis guns for the observer's use. Like the D.H.4, the Salmson 2's main drawback was the wide separation of the two cockpits, which made communication and collaboration between the crew members difficult when in combat. It was fitted with self-sealing fuel tanks, rather unusual at this early stage.

Although it did not possess a particularly outstanding performance, the Salmson 2 was a sturdily built machine with an extremely reliable engine and was capable of receiving and meting out considerable punishment. Lt. W. P. Erwin of the 1st Aero Squadron A.E.F. destroyed eight enemy aircraft using only the front gun of his Salmson 2. The Salmson was not especially fast, but it had a useful rate of climb, being able to reach 5,000 m, (16,404 ft.) in 27 1/2 minutes. 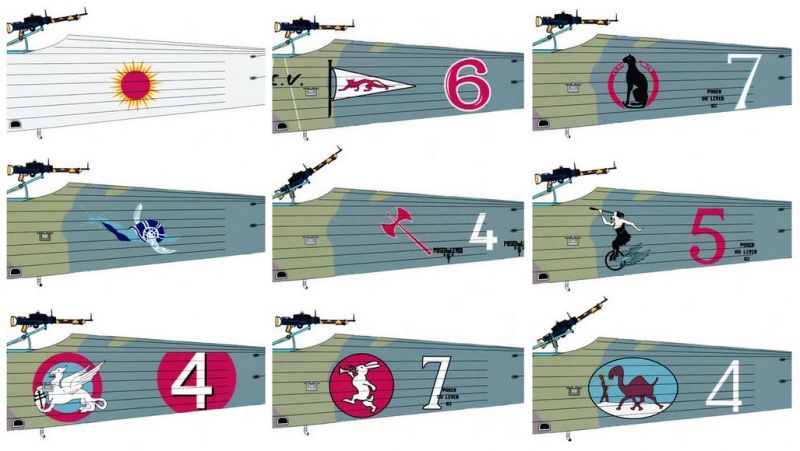 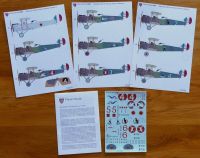 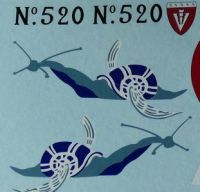 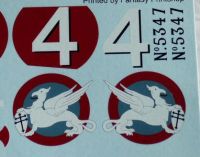 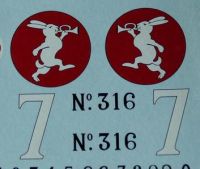 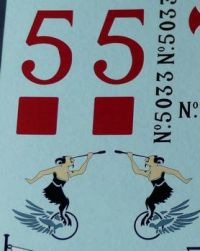 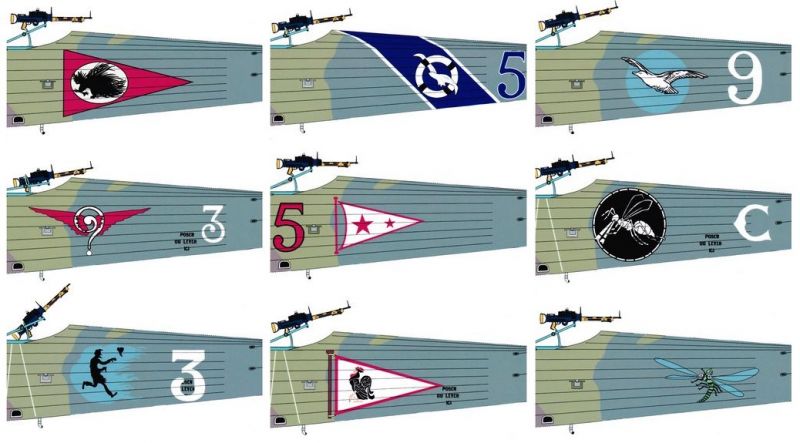 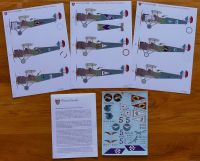 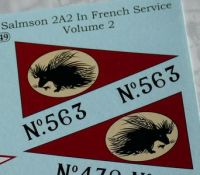 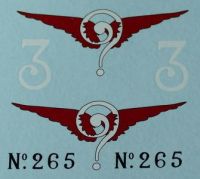 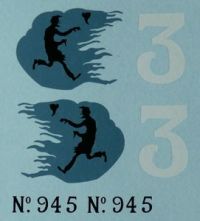 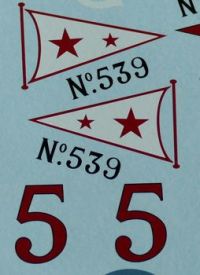 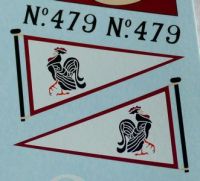 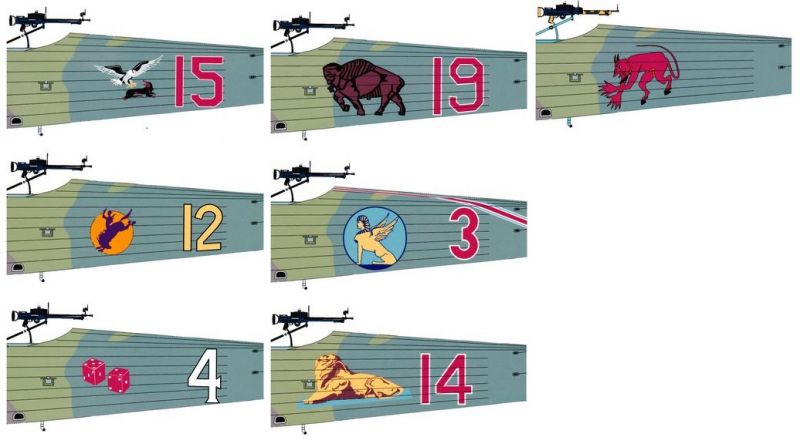 Seven markings options: six from USAS, Squadrons 24th, 88th, 90th, 99th, 104th and 258th plus a post-WWI aircraft in Polish service, ex French unit SAL 582. Pheon have opted for “more conventional” shades of red and blue on their USAS markings compared to the Wingnut Wings kit, including a separate sheet of cockades. As ever, it is a very brave (or extraordinarily well researched) reviewer who takes a position on WWI colours…that person is not me.
Price: £14.00 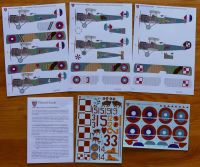 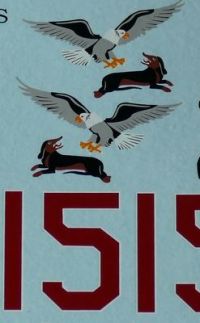 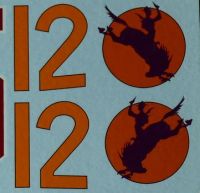 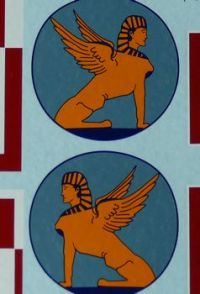 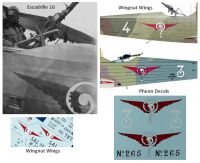 These three sets are very colourful. Eleven separate colours have been used plus the varnish coat so twelve processes in all, making them amongst the most complex and time consuming yet produced by Pheon. With the silk-screen printing process each colour pass is a separate operation and the sheets must be fully dried between each colour and precisely aligned each time to ensure correct register, which Fantasy Printshop have managed perfectly as usual. The more processes, the higher the cost, of course and low volumes also push the cost of production per sheet up.

Each set comes with three sheets of A4 sized full colour artwork to guide decal placement and a comprehensive instruction booklet including historical notes on each option, packed in a zip lock bag with card stiffening inside a padded envelope.

Available only direct from Pheon Models by email: pheon@pheondecals.com
Payment is by PayPal. Postage and packing costs are additional.

Only 125 of the French sets #32048 & #32049 and 250 of the US & Polish sets #32050 have been produced. Although these have not been marketed as "limited editions" Pheon have stated it is unlikely that they will ever be re-printed. This is a change from the company’s earlier policy of always keeping items in stock with reprints when they run out. I suggest if you think you might want these at some stage in the future, don’t assume they will be available down the track, order them now while you can. Likely to be very sought after when all sold out.

The next two sets are for the Meteor F4 from HK Models in 1/32 scale with full stencil data, which Rowan hopes will sell well enough to finance more WWI sets. He is waiting to receive the new Jasta 30 book from Aeronaut Books which will provide lots of new schemes for Albatros, Pfalz and D.VII fighters - even a DFW C.V "squadron hack" with orange diamond markings for the new WNW kit. Rowan is also digging to find additional markings for the new DFW kits and there will be a number coming - including some with lozenge finish.

I wasn’t planning on buying the Salmson but after seeing these decals I feel quite inspired. That’s what after-market decals are all about. Short production run, so don't muck about. Highly recommended.

Thanks to Pheon Decals for providing the sample sets for this review.

This review was published on Thursday, September 04 2014; Last modified on Wednesday, February 07 2018