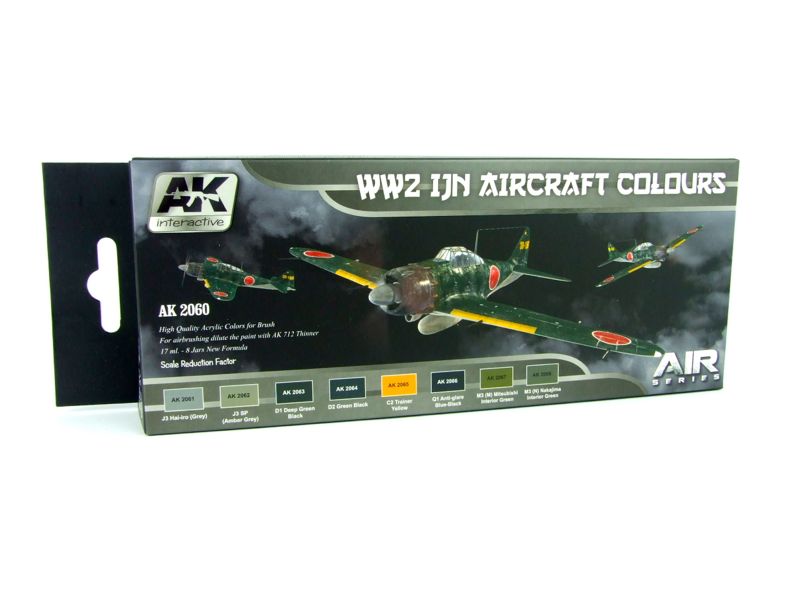 Spanish firm AK Interactive has, in a relatively short space of time, become quite well-known for its finishing and weathering products, of which it sports an extensive range. The company has recently extended this range with a series of acrylic paint sets for aircraft, dubbed - appropriately enough - the Air Series. Here we examine set AK 2060, WW2 IJN Aircraft Colours.

The set features eight colours for Japanese Navy aircraft during WW2. Each comes in a 17ml bottle in the increasingly popular eye-dropper style: 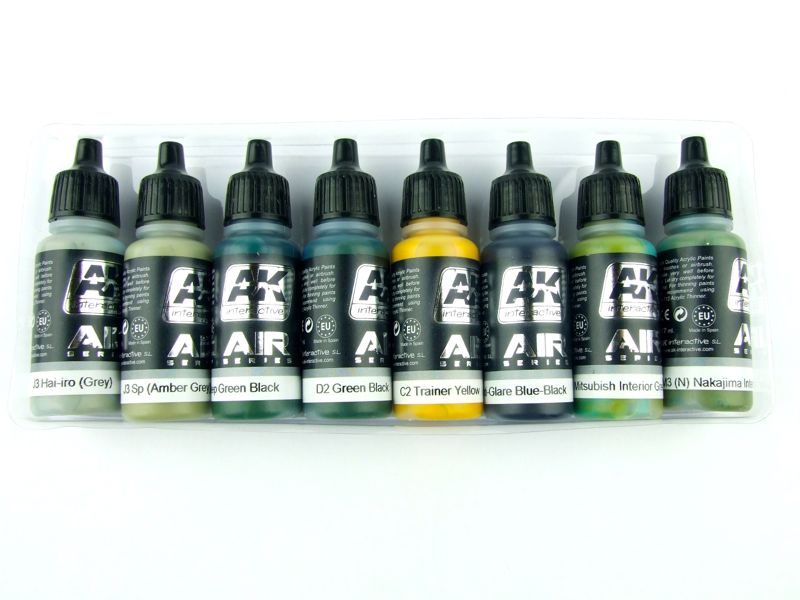 The included colours are as follows:

In practice the printed colour swatches on the front of the box appear to bear little resemblance to the actual paint colours found inside. Maciej from AK Interactive tells me that the paints in this set are based on colour samples provided by Nick 'Straggler' Millman, a noted specialist in WW2 Japanese paint colours. This doesn't necessarily guarantee their accuracy, but it does indicates that they are backed by knowledgeable research, and likely to be at least as accurate as any of the alternatives.

Printed on the rear of the box is a handy guide to which aircraft and periods used what combinations of paint: 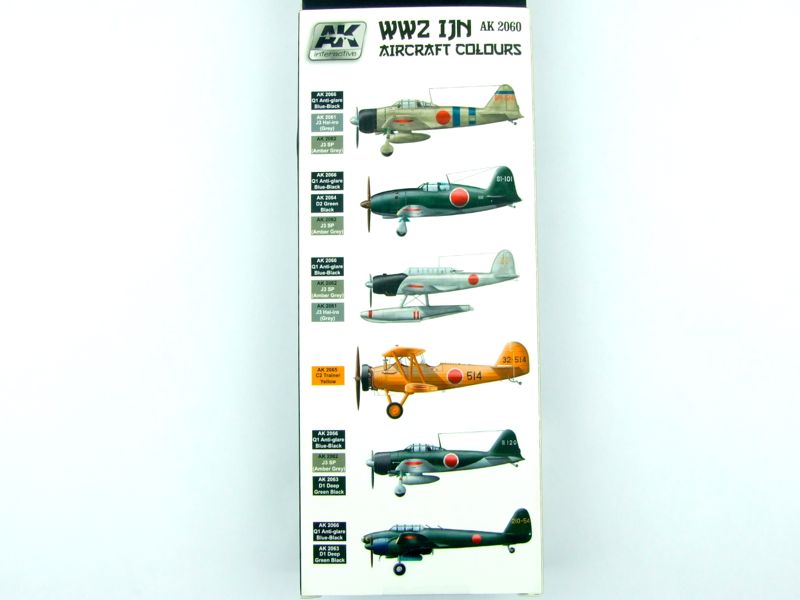 This is further supported by text on the side of the box, explaining the role of each colour provided in the set:

Armed with this information, I decided to put these paints through their paces. Out of sheer coincidence, I happened to have a build of Tamiya's ancient 1/48 Rufe kit on the bench, and at the painting stage. A perfect subject! I elected to use AK 2061 J3 SP (Amber Grey) as the underside colour, and set about the task.

The Rufe build had reached the stage of being in black primer, ready to be used as a test-bed for Matt McDougall's 'Black Basing' technique, which is designed to produce a variegated effect, and break up flat blocks of colour. In order to show what this colour actually looks like in its pure form, I sprayed one wing of an old paint mule with it: 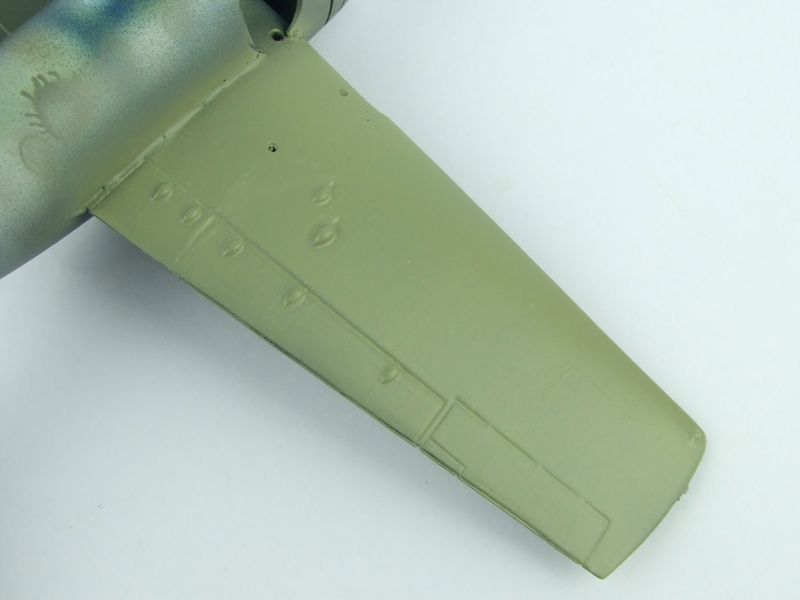 I've read of this colour being described as a sort of pistachio green, and straight out of the bottle, this example closely matches what I imagine it to be in my mind's eye. It's worth noting, too, that AK Interactive claims to have taken the scale effect into account when formulating these paints, dubbing it Scale Reduction Factor: 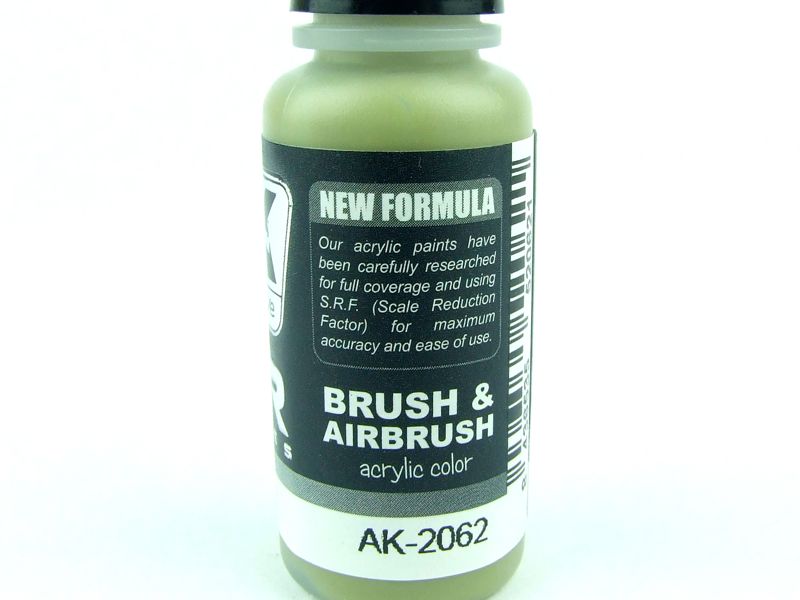 These paints need to be thinned for airbrushing, and the packaging notes that they can be brush-painted - an area where acrylic paints have traditionally struggled, so I decided to put this to the test too. The recommended thinning agent is AK Interactive's own AK 712 thinner. Not having any on hand (none is included in the set), I tried a variety of the usual suspects as a substitute, with varying success, as we'll see next.

The paint's nominal viscosity is somewhere between that of Vallejo's Model Air and Model Color ranges. My airbrushing tests were performed at around 10-12 PSI, but I'd imagine that these paints could be sprayed successfully without thinning at higher pressures (say, 20+ PSI).

For the first test I decided to thin the paint with ordinary tap water, and to my surprise, it worked pretty well. I over-thinned the paint, unfortunately, so I ended up with spatters and runs. One of the reasons I prefer to use a proper solvent for thinning paints, rather than water (where applicable), is that water takes too long to evaporate, and combined with a relatively high surface tension, will tend to produce pooling and running more easily than something that evaporates much more quickly. Still, for those of you happy to thin with water where you can, it does appear to work.

Next I decided to try that old standby, Tamiya X-20A. This particular thinner is famous for being effective with a large range acrylic paints, so it was only natural to try it here. While I can say that it worked, the paint had a tendency to separate out in the airbrush's colour cup, and the resultant paint flow was not as smooth as I would have liked it to be. It would work at a pinch, but I wouldn't recommend it.

I also tried both hardware-grade lacquer thinner, and Mr. Color Thinner, neither of which was a success. Indeed, the latter simply produced a coagulated soup of goo and paint clumps. I don't even recommend using lacquer thinner to clean out your airbrush, as it wasn't particularly effective.

Given that these paints bear a superficial resemblance to those of Vallejo, and having a bottle of Vallejo's acrylic paint thinner to hand, I decided to give it a go. Immediately I could tell I had a winner. The paint mixed smoothly to a uniform colour and consistency, and flowed nicely out of the airbrush - at least initially. One of the issues that plagued this test from here on was the constant clogging of the tip of the airbrush needle. This too is a common trait among acrylic paints, but it's possible that AK Interactive's own thinner would reduce or even eliminate this effect.

The 'black basing' process I employed on the Rufe necessarily distorts the paint's natural hue, so the photo below isn't particularly representative of the paint's colour - please refer to the earlier photo for that. But even when combined with a process designed to produce colour variations, I think the result still looks quite authentic: 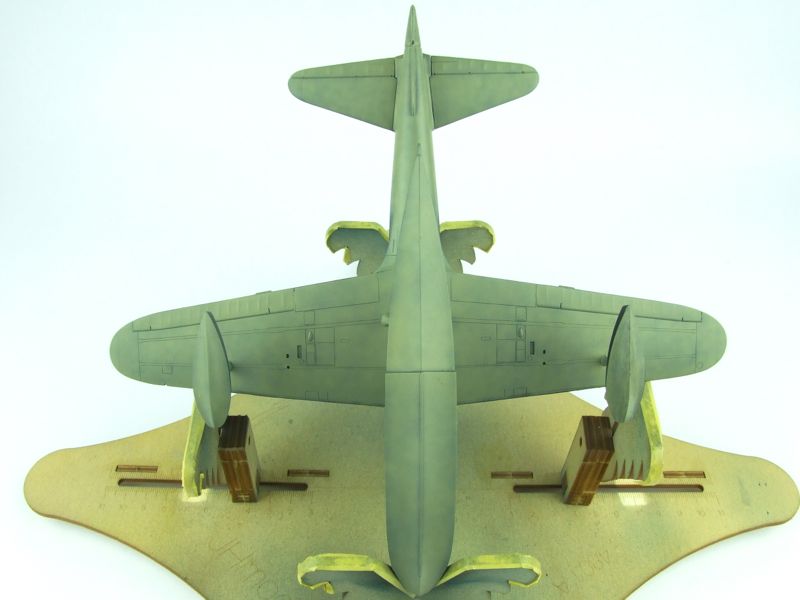 The results of my brush-painting test were less convincing. I used the bottom of one of the outrigger floats for this. Here it is after one coat of un-thinned paint: 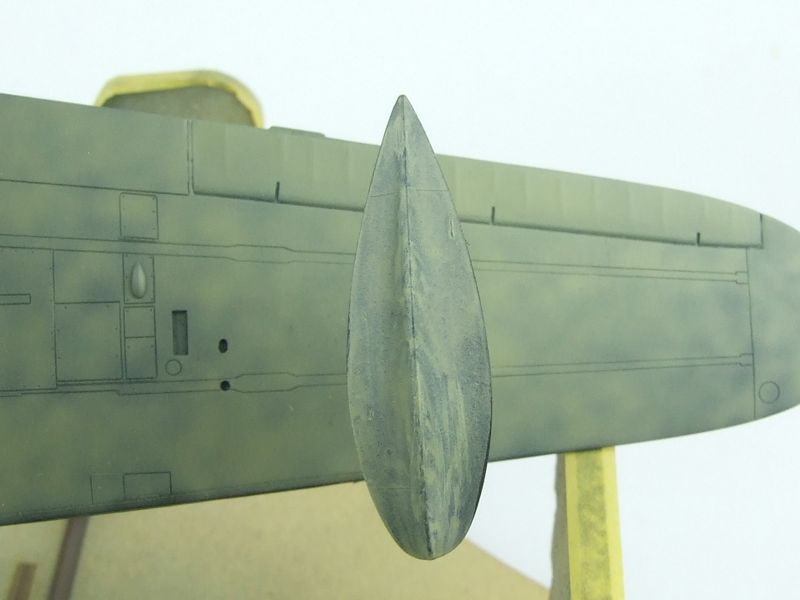 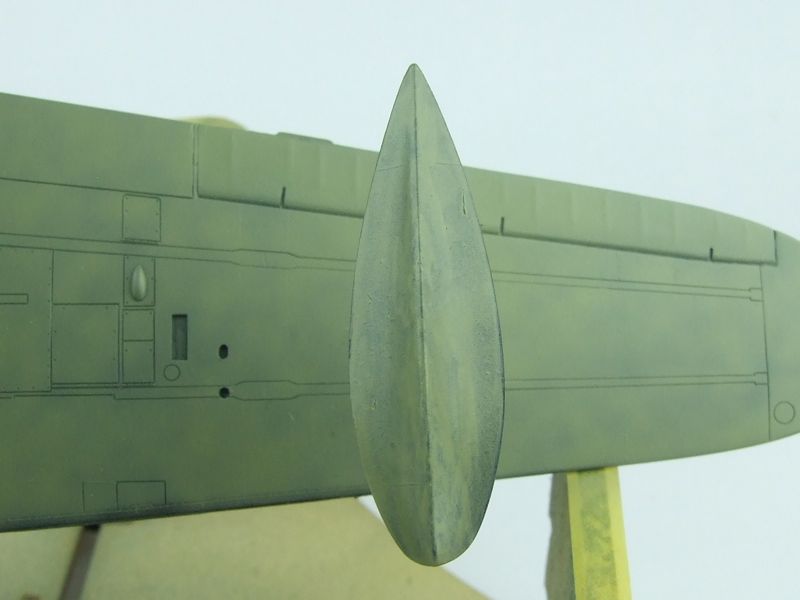 And after a third and final coat, again un-thinned: 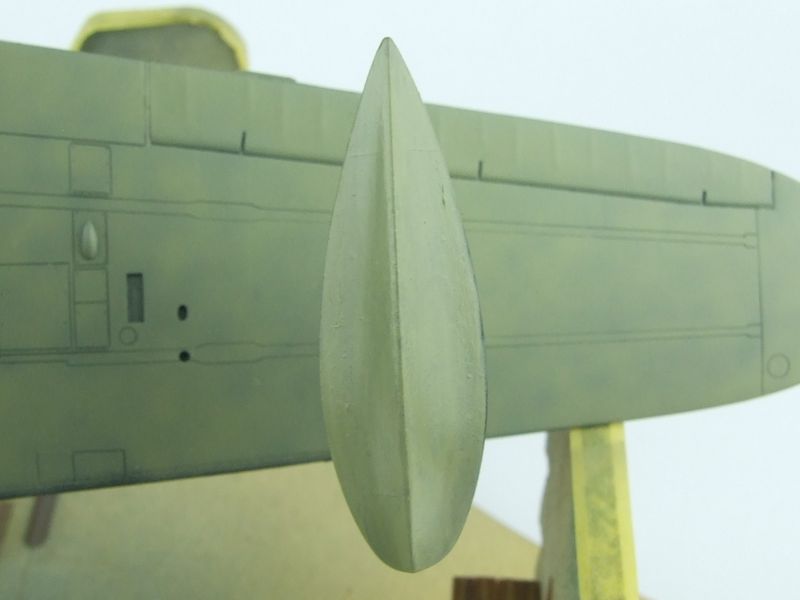 It looks acceptable from a distance, but brush strokes are still visible up close, and the paint doesn't self-level as well brush painting requires. I suspect this paint would give perfectly acceptable results when brush-painting small components, however, and is certainly easier to brush-paint than Gunze or especially Tamiya. Interestingly, the brushed-on paint is much more glossy than its airbrushed counterpart.

Overall I think this is a terrific paint set. It features a nicely complementary set of colours that are well-researched and likely to be as accurate as they get. Airbrush performance is decent, and on par with Vallejo's Model Air range. Coverage is excellent, and can be easily controlled by varying the thinning ratio. I think the set itself could be improved by including a matching bottle of the recommended thinners, even if just to get you started. The main drawback though, is that the constituent colours don't appear to be available separately, so if you run out of a particular colour that you happen to use a lot of, you'd have to buy the entire set to get more of just that one colour. While this has no impact on the quality of the set itself, it does compromise its long-term utility, and I think AK Interactive should consider addressing this.

All in all though, it gets my recommendation! I intend to finish the upper surfaces of my Rufe build using this set, so please follow my build if you're interested to see how that colour performs.