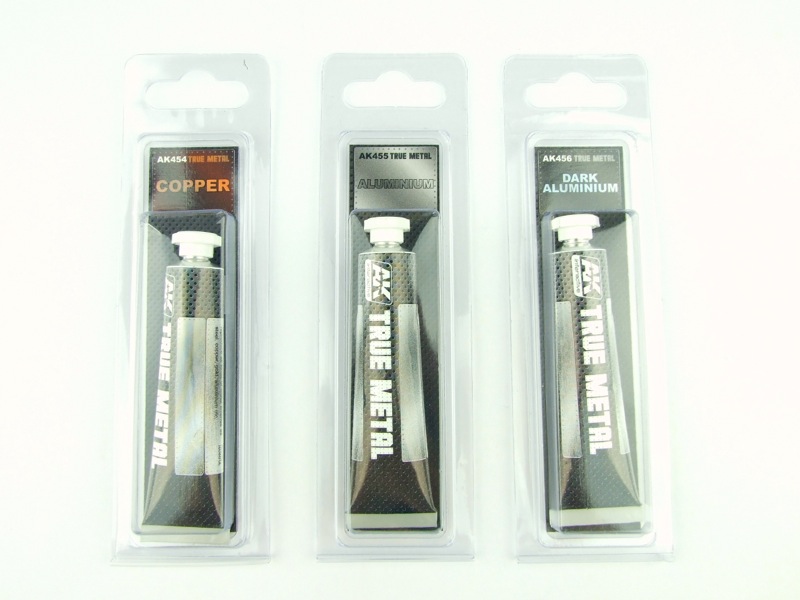 Spanish firm AK Interactive has, in a relatively short space of time, become quite well-known for its finishing and weathering products, of which it sports an extensive range. The company has recently extended this range with an intriguing series of wax-based metallic pastes, dubbed True Metal.

AK Interactive sent us the following three colours to review:

It's fair to say that one of the holy grails in scale modelling is a product to simulate natural metal finishes that is easy to use, provides a convincing result, and is tough enough to withstand subsequent handling and masking. Paints like Alclad, while excellent, require an airbrush, are messy to use and clean up, and demand meticulous surface preparation. Spray cans, such as the TS and AS ranges from Tamiya, are easy to use and don't require an airbrush, but are still messy, and don't always provide the most convincing result. The True Metal range seeks to address these issues by being a wax-based metallic paste that you spread on the model with a brush, cotton bud or finger: 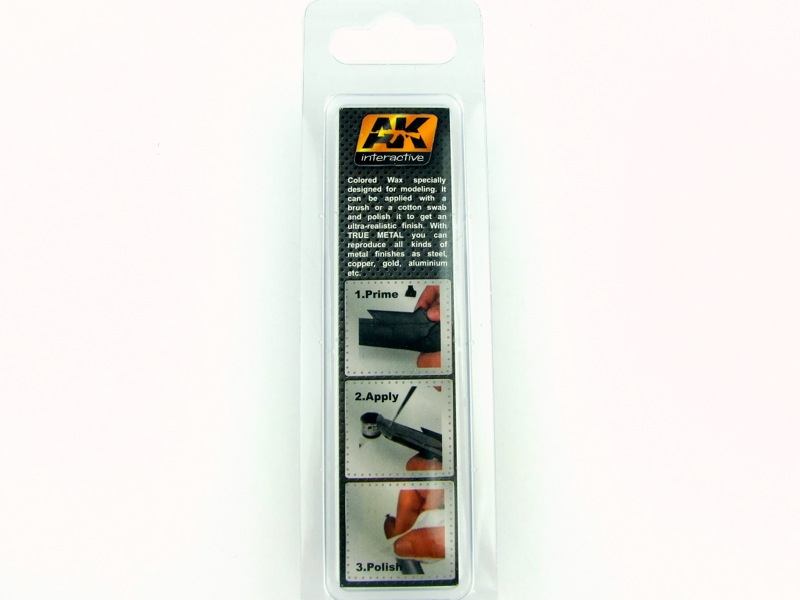 For my testing, I elected to use a brand-new #8 flat brush, and AK455 Aluminium: 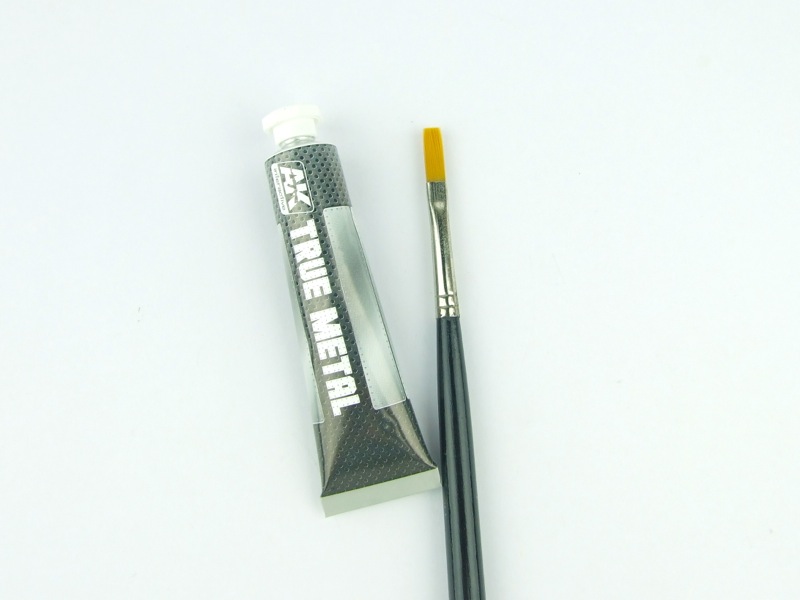 After some experimentation, I discovered that my brush washed out very nicely using white spirit, so I kept some on hand throughout my testing.

My test subject is Trumpeter's neat little 1/144 scale Kawanishi H6K5-L kit, which features a pre-war, all-silver livery. I followed the instructions and primed the completed wing assembly with Mr. Surfacer, using 1500 black for in the inner section, and 1200 grey for the outer sections. I wanted to see if the base colour had an affect on the finish. Once cured, I gave the entire wing a light polish with a polishing stick. 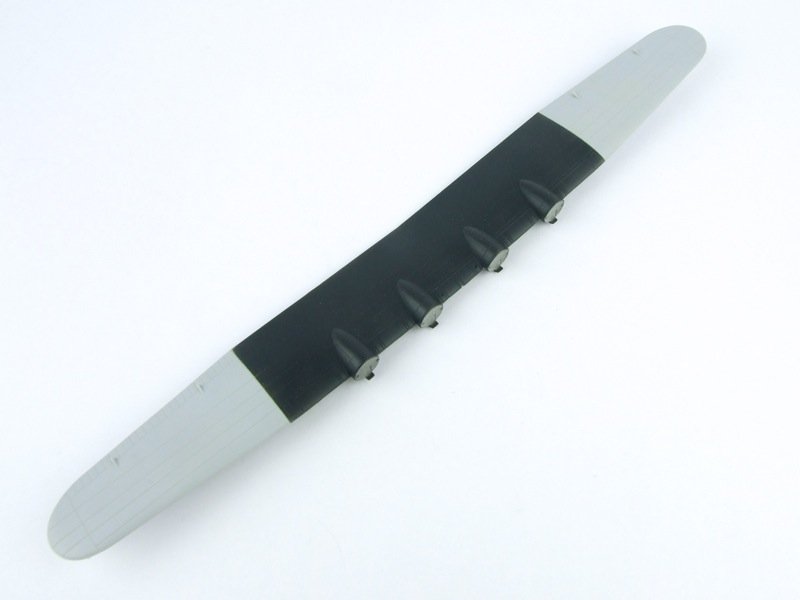 The paste itself has the consistency of gritty toothpaste, and initially flows off the brush with alarming ease - so much so that it's hard not to feel that you're using too much. Within a few seconds though, the wax starts to congeal, and just like brush-painting any kind of paint, it becomes highly susceptible to brush marks. Unfortunately, these don't level out like they might with a good-quality hobby enamel. Here's the result of the first pass: 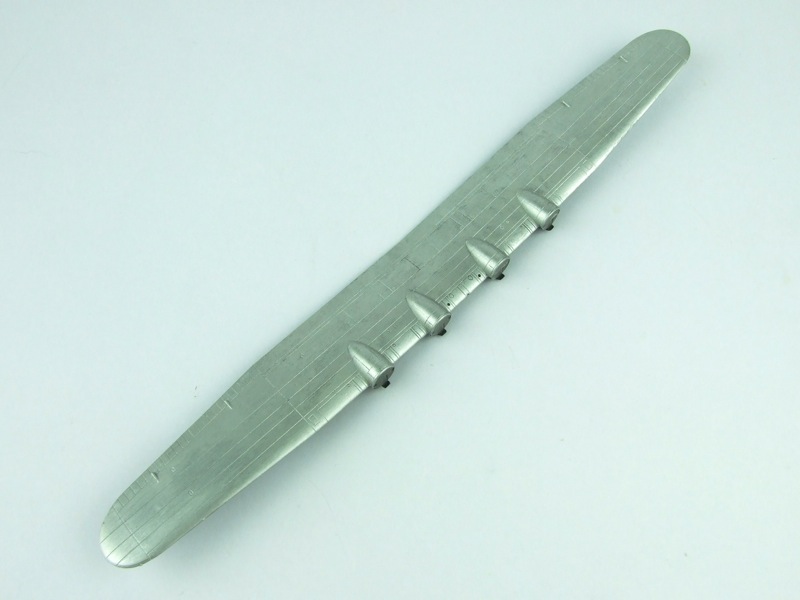 The first thing to note is that, with this particular application technique at least, the underlying colour had no effect on the end result. Secondly, as you can see in the close-up below, the brush marks are quite evident, and the overall finish is highly uneven: 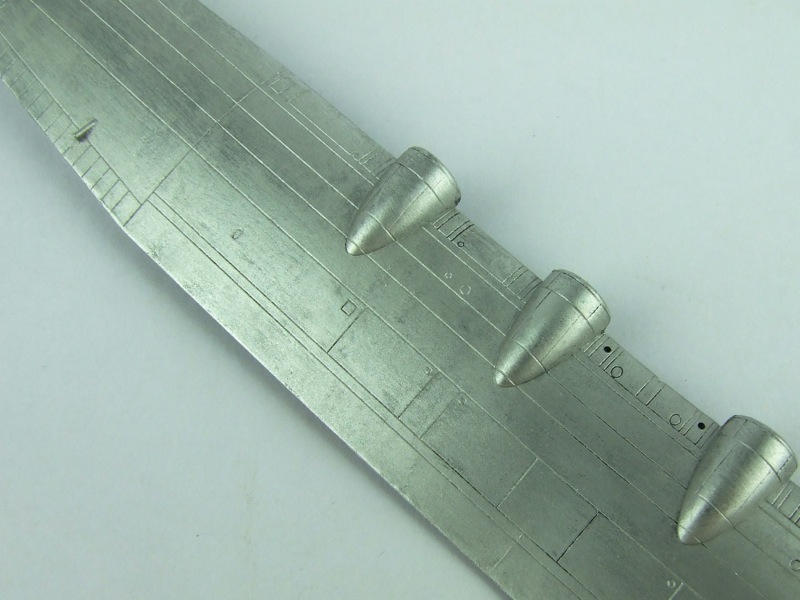 Rather than simply apply more, I decided to see if polishing would rectify or otherwise improve the finish. The instructions give no indication about 'drying' time, or how long it takes to become safe to handle or polish, so I attempted to polish the surface more-or-less immediately after taking the photo: 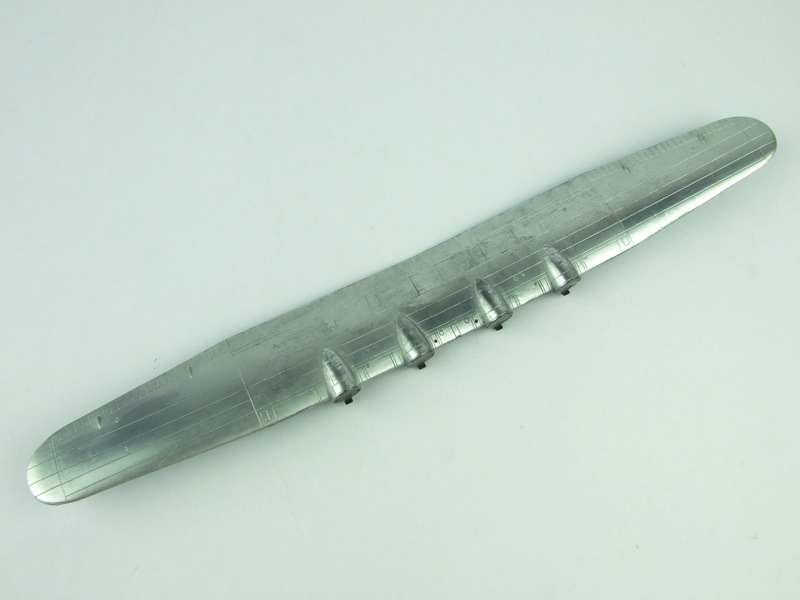 It certainly polishes nicely, and doing so brings out quite an authentic metallic sheen. But polishing made no improvement to the unevenness of the finish, and in some respects made it worse: 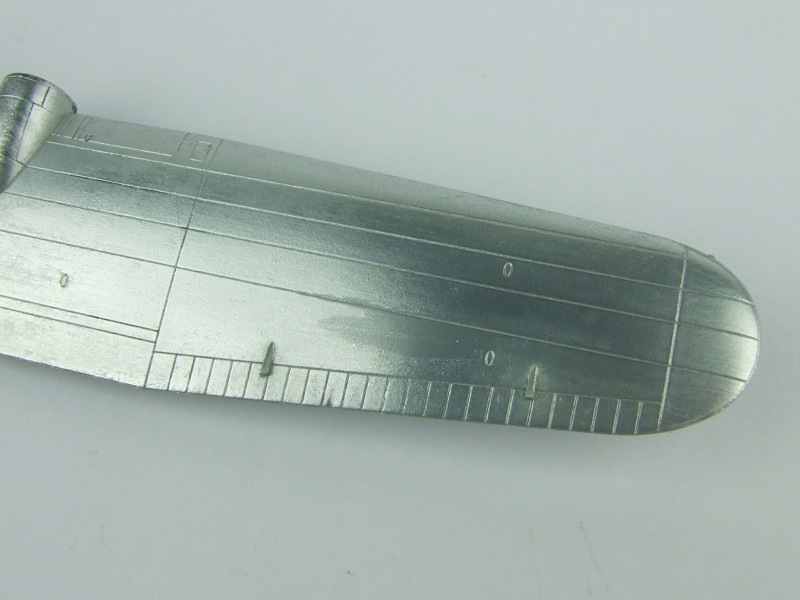 Needless to say, I was seriously dissatisfied with the results so far. Having already established that True Metal appears to be soluble with white spirits, I decided to see if I could use it to remove this initial attempt and start again. Sure enough, it all came off with ease: 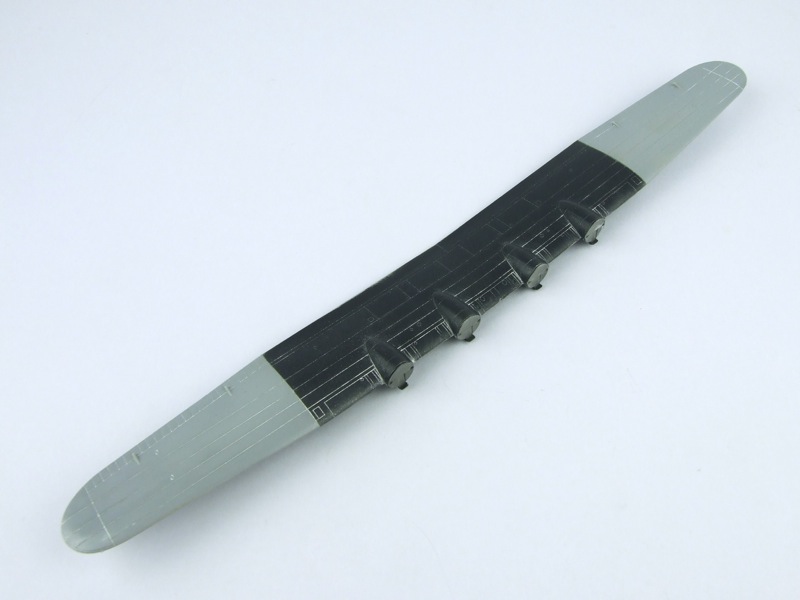 For my second attempt, I decided to try the suggested cotton bud method, and while this certainly eliminated the brush strokes, the finish was still frustratingly uneven: 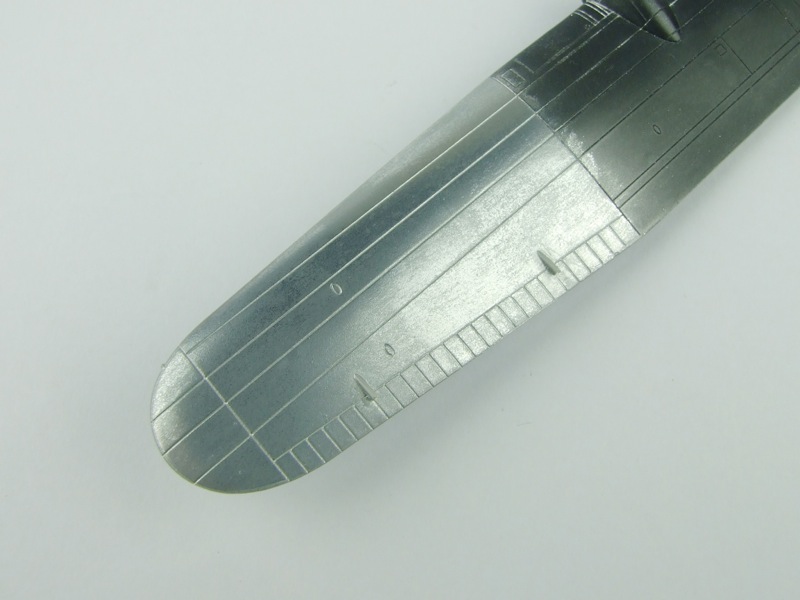 And polishing it (again, almost immediately) resulted in most of it being removed! 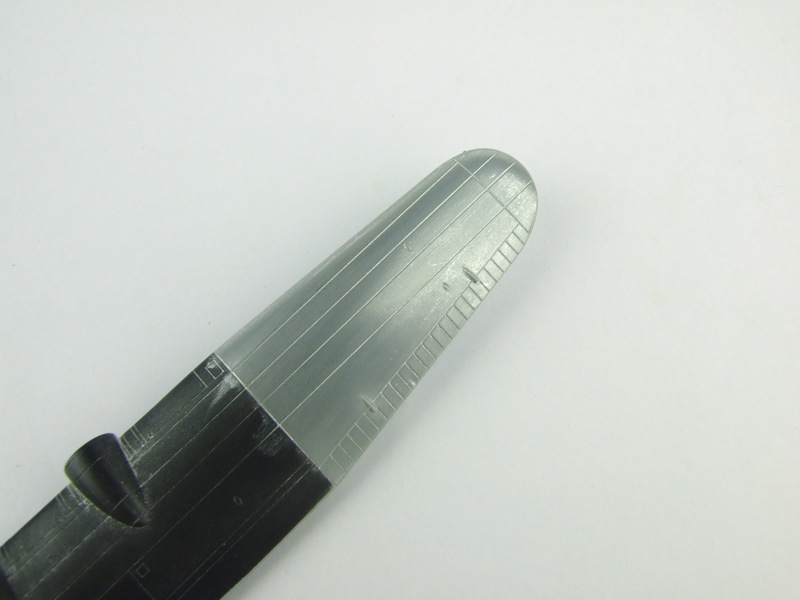 I vaguely recall someone mentioning that it was possible to airbrush True Metal, so I mixed some paste with some white spirits, and gave it a go: 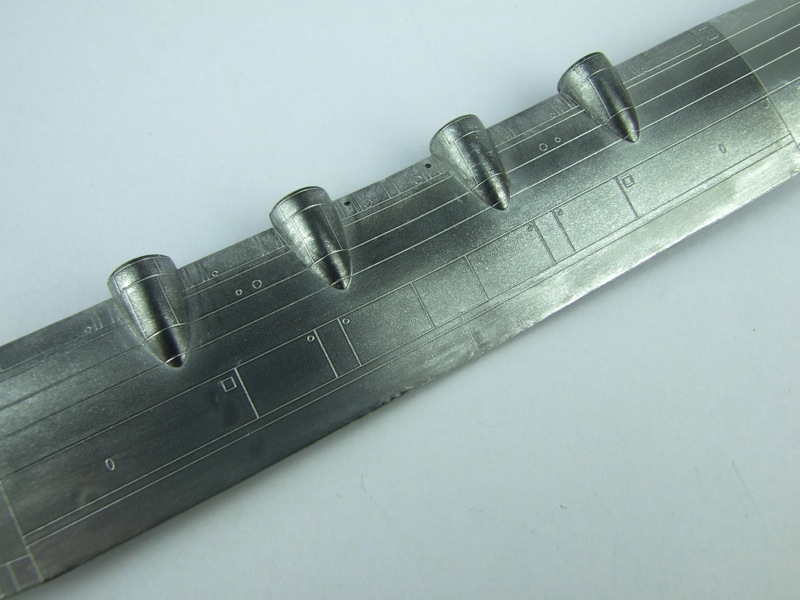 Terrible! But, my mix was way too thin, so it wasn't a fair test. Still, my airbrush sputtered the entire time, so even though I had decided to test it again with a thicker mix, I was by now quite sceptical.

With my frustrations growing, I stripped it off again, and repainted the entire upper wing with Mr. Surfacer 1500 black. I did a little bit of poking around on the web, where I met with some evidence that I had been doing a couple of things incorrectly. The first is that the product appears to prefer a satin-to-matt base coat, rather than a shiny one, so I skipped the step of polishing the primer this time. Secondly, it was suggested that you should wait at least 20 minutes before attempting to polish the applied layer, so it appeared that I may have been abusing the product's drying time.

Armed with this new-found information, I flipped the wing over and began applying the True Metal by brush, but more carefully this time, being careful to avoid going over where I'd just been, and generally trying for a more even finish. And with some success I might add: 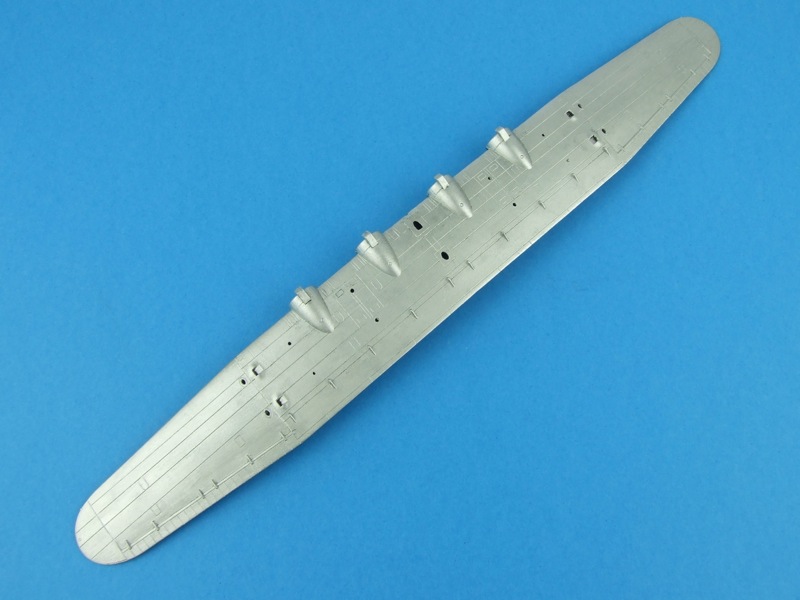 This is clearly a much better result, but still not as good as I could achieve with TS-12 and an airbrush. It did resemble a nicely-oxidised aluminium finish, however.

This time, I left it overnight prior to polishing, but this didn't seem to bring any added advantages. Brush strokes still didn't polish out, and the more I polished, the more variegated the finish became: 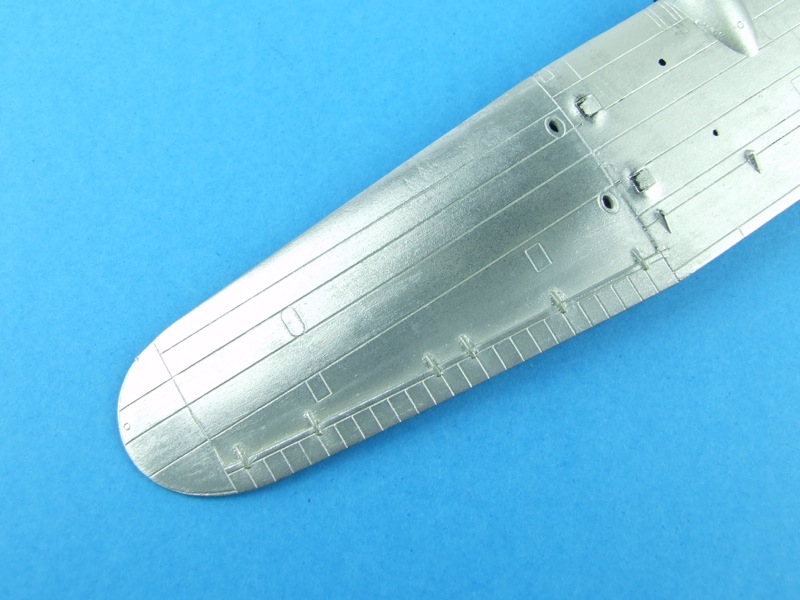 The overall effect, however, was the best so far: 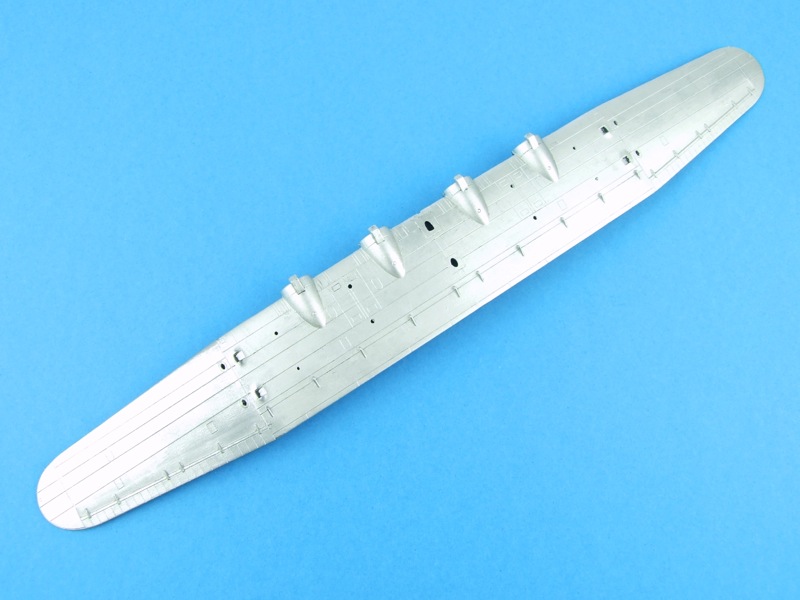 Then, for some reason, I decided to see what would happen if I attempted to polish the surface with a rotary tool fitted with a polishing wheel. This simply stripped enough of the finish, such that it became very uneven, with the base coat showing through in some areas: 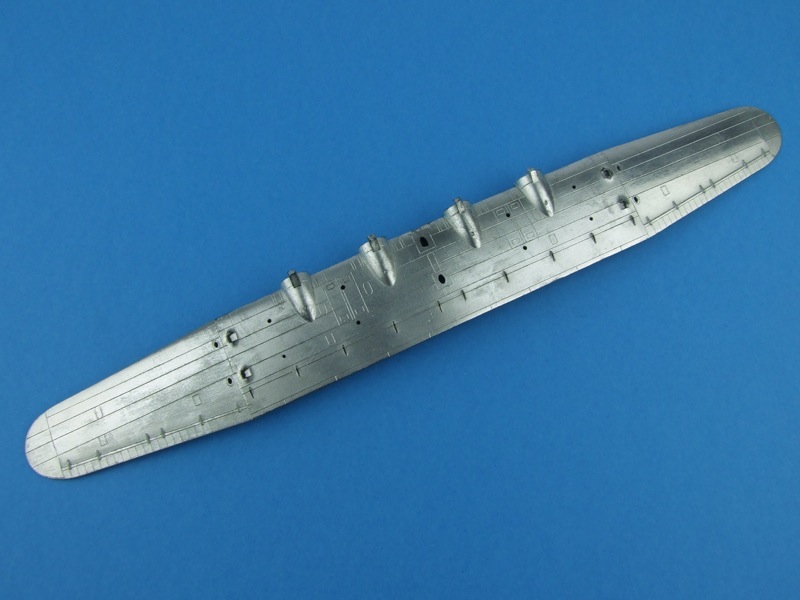 Clearly, mechanical polishing is not recommended!

It was now time to give airbrushing another go, so I returned to the newly-primed upper surface, and applied a much thicker mix of True Metal and white spirit: 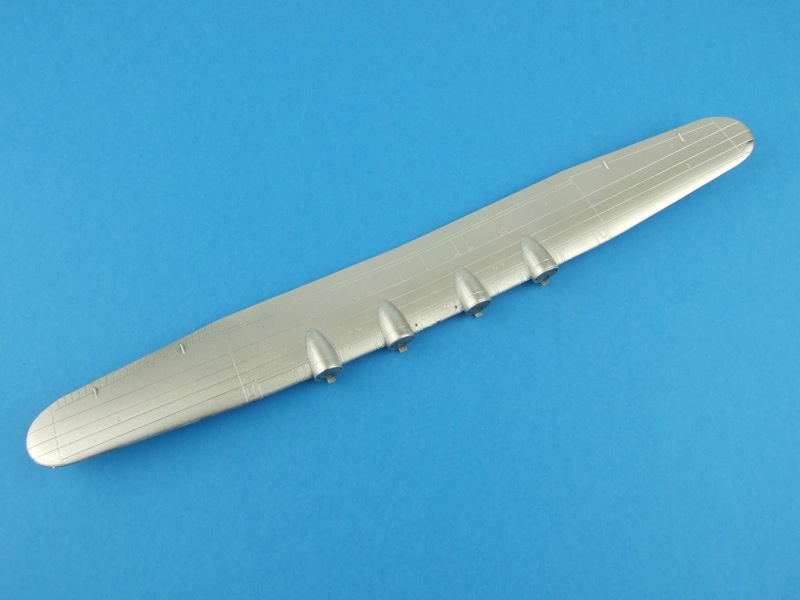 Success! My airbrush still sputtered and complained, but the result was a smooth, if dull, aluminium finish. The result proved to be substantially more fragile than the painted-on version, and breaking through to the primer wasn't difficult to do: 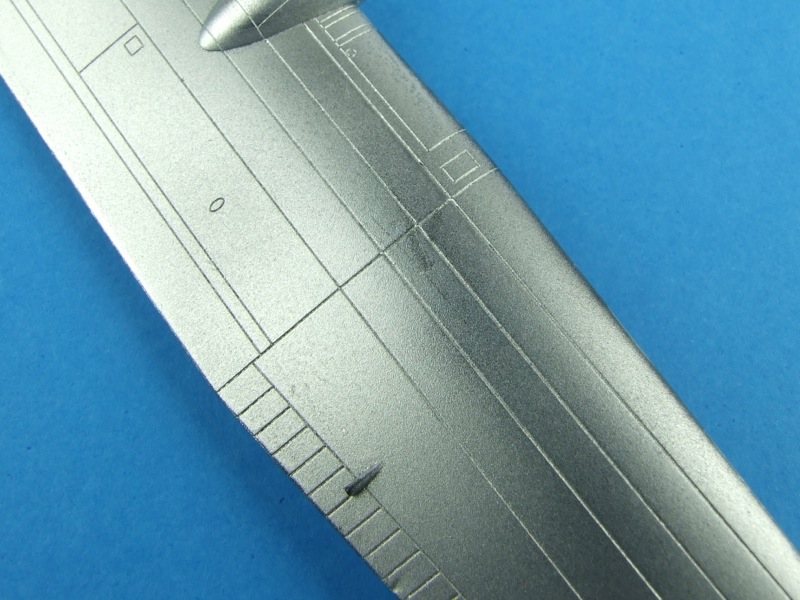 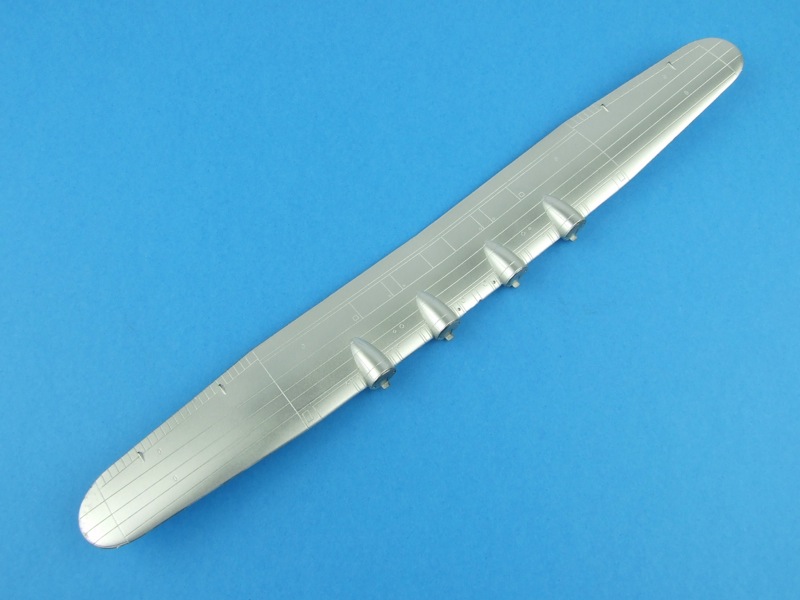 I even re-sprayed the underside to good effect: 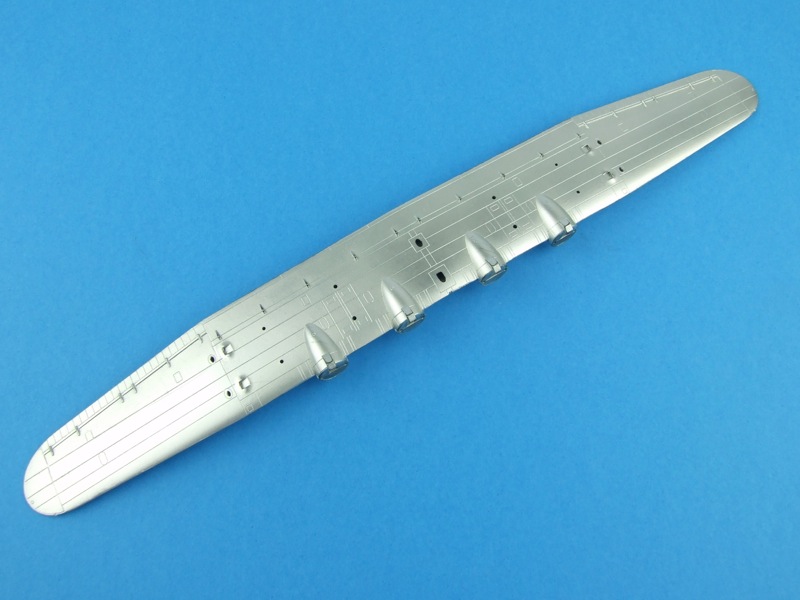 This was, however, a lot of trouble to achieve a finish not quite as good as I can achieve more easily with other methods. What's more, the resultant finish is exceedingly fragile, and comes off easily on your fingers: 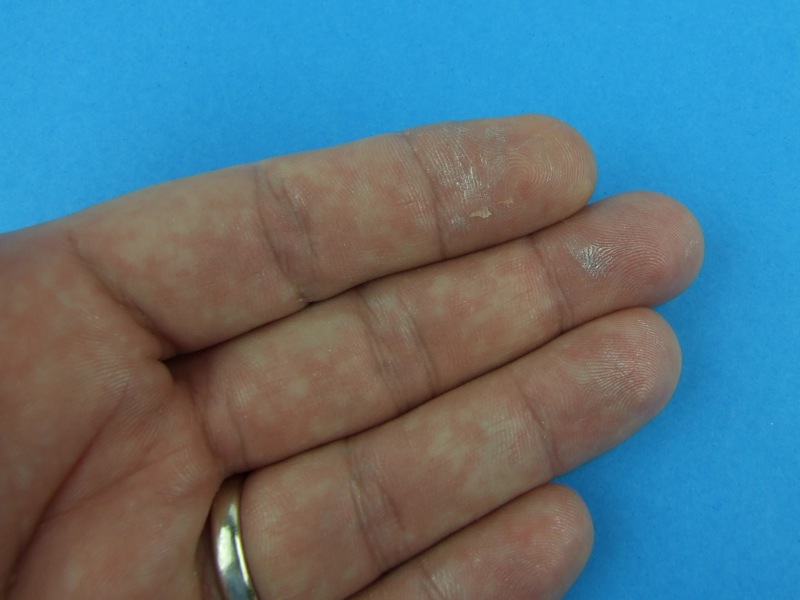 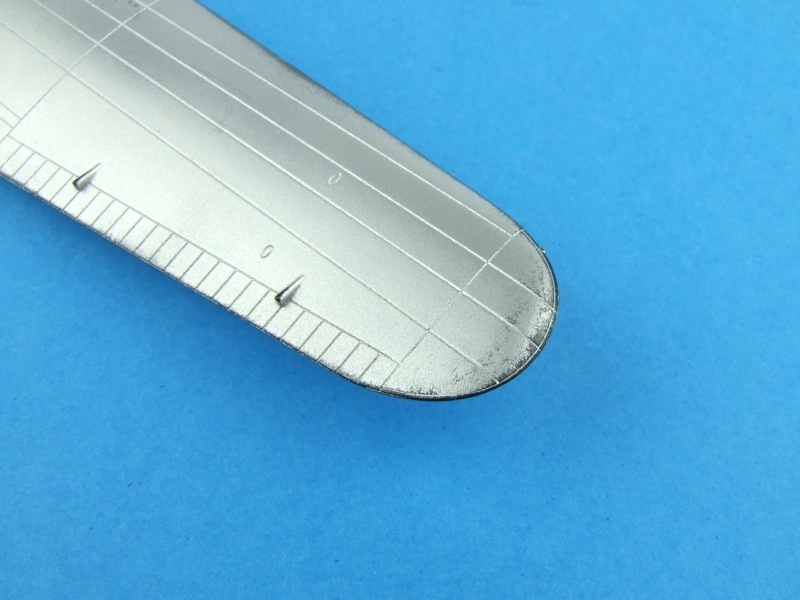 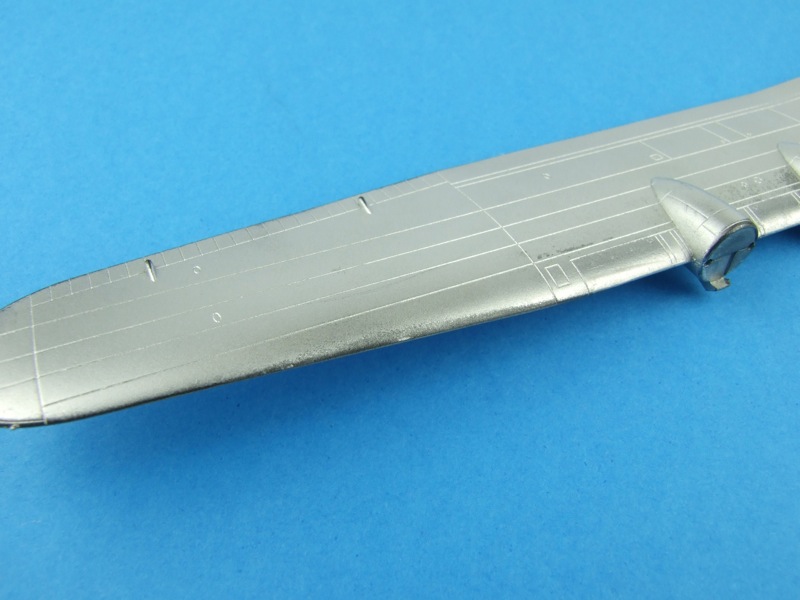 This fragility was further confirmed when I masked some panels on the wing leading edge and applied some AK456 Dark Aluminium to them: 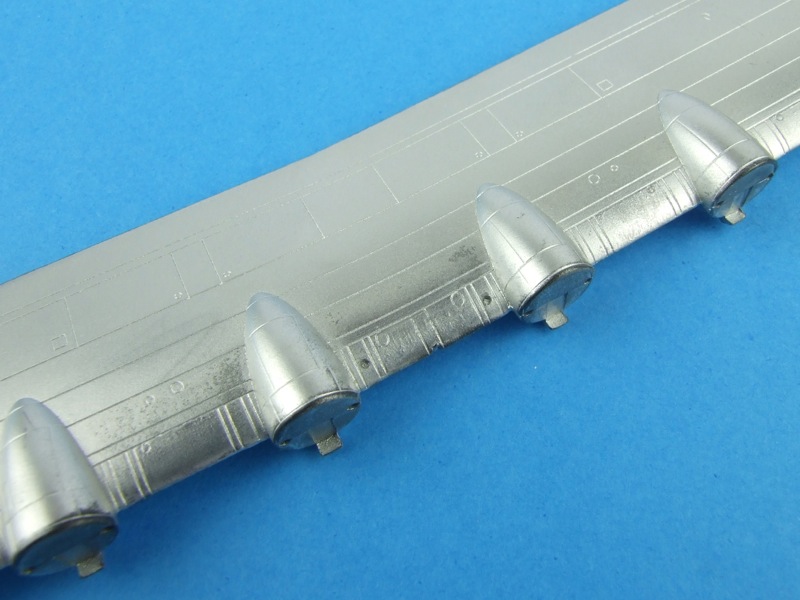 The airbrushed top surface lifted quite easily, despite the fact I had employed used Tamiya tape that had been twice de-tacked. Reassuringly, the bottom surface stayed intact, as its airbrushed top coat was laid down over the thicker brushed-on layer from earlier. The brushed-on application is certainly much more robust.

At this stage I was originally planning to perform a decal application test, but I could no longer see the point, so I skipped it. I wouldn't recommend applying decals before a sealer coat of gloss clear - at least, not on the airbrushed finish.

It may seem that I've given True Metal a rather poor review, and you may even deduce that it's useless. I think that's far from the case, in truth. I suspect the problem here is that the product really isn't suited for use over a large area like I've attempted to here. I think it would work fantastically well for individual panels, or for detailing such as pipe work and the like. As a replacement for traditional approaches to achieving natural metal finishes, I think it's far more work than it's worth, for a result that doesn't really stack up against the best of the rest.

I'm also prepared to concede that my methods and techniques may have been flawed, and that other approaches, or a more refined technique, could have produced a better result. Certainly, the results shown in AK Interactive's own product tutorial contradict my own experiences. Other reviews I've seen online have limited their testing to small panels or squares of styrene sheet, and the reviewers have been largely happy with their results. I'd love to hear from other users who have tried to replicate a full natural metal finish with True Metal, and how they got on.

While I can't deny that I was disappointed and frustrated during my attempts to use this product, I can still see a clear use case for it. For example, I think it's ideally suited to small panels on armour or sci-fi models, panel highlighting on natural metal aircraft, or painting small metallic details such as pipes or hose fittings. I'm just not sold on it as a natural metal finish for aircraft. If further usage and testing yields different or better results, I'll be sure to report them in the forums.