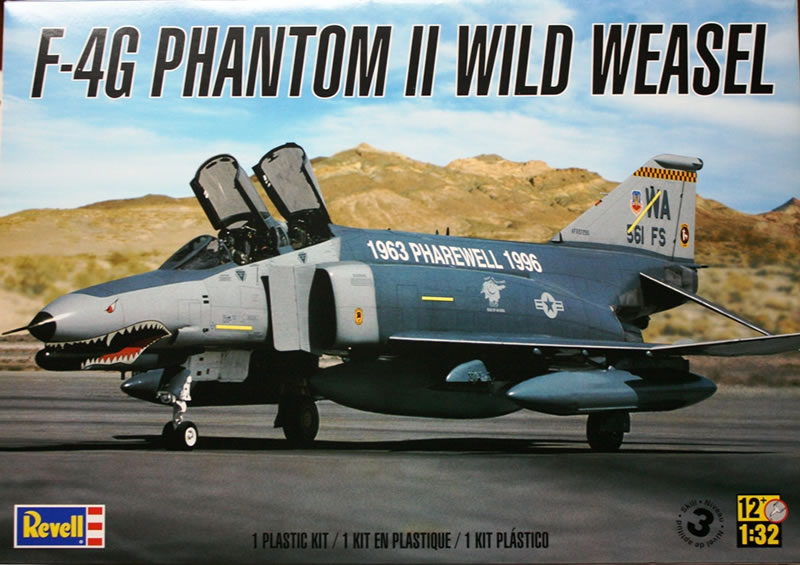 I finally got the chance to look over the Revell F-4G and it’s not that good. The new F-4G Sprue we saw at the Nationals last August is what comes in the kit. All the original F-4E sprues still remain, so an F-4E can still be made from the F-4G kit. The Revell F-4E shape and detail inaccuracies have been covered already, so I won’t rehash those issues. The only change to the original F-4E sprues is the nose/Radome; more on that later. The new F-4G parts sprue include 1 AGM-78, 1 LAU-78, 2 AGM-45s, 2 LAU-34, threat warning antenna, fore cockpit Instrument Panel, aft cockpit IP, APR-38 Chin and vertical tail pod. A clear sprue with the one piece windscreen is also included. On my initial look I could tell most of the G parts are underscaled and/or inaccurately shaped. Revell's F-4G update is also incomplete as missing are the low band APR-38 antennas and lower Special Threat Warning Receiver antenna, though the upper Special Threat Warning Receiver antenna with the offset base is included. 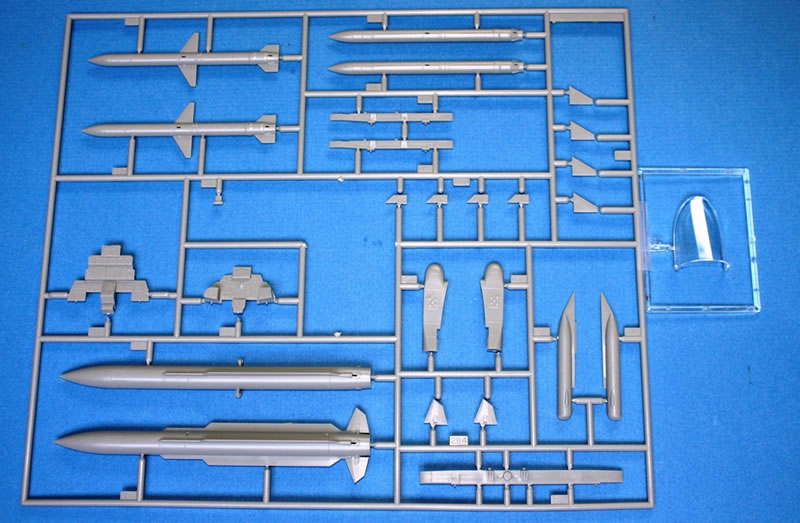 As I mentioned previously, We (Sierra Hotel Models) aided Revell with correcting the Radome, but unfortunately they did not execute to correction completely. Revell corrected about 2/3 of the nose bulge profile; from the top to just below the 90 degree points of the sides. The top profile is slightly more exaggerated than ours and the lower profile is practically flat. The bottom was left the same as the original nose/radome profile. It’s quite evident they did this to accommodate the lower Chin Pod, which was tooled previously (by the time of the Nationals) for use with the original nose. Not a good decision by Revell's tooling department as this does not totally correct the nose and in some ways makes it worse. Now the upper slope profile looks even more exaggerated with the lower profile being almost flat. It reminds me of a witch's hook nose. The lower profile issue is masked by the chin pod somewhat, but it's still noticeable. Unfortunately it will probably look worse on the F-4Es and Fs, though I plan to build up the front fuselage to get an idea how the profile will look when the model is built. So in a nutshell, though Revell made an effort to correct the nose/radome, it’s still wrong. It seems that AMS and SHM can add one more F-4 designation to their corrected Revell F-4E/F nose/radome package; "G". Hey, we tried. 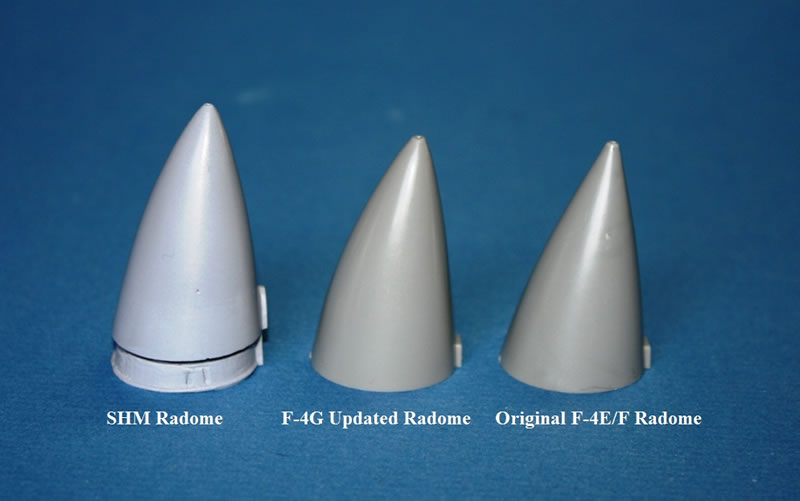 The Chin Pod is totally misshapen. The front dome is totally wrong and the sides have a weird contour transition to the front dome, which is totally wrong. The upper area of the chin pod should be wider than the lower, but the Revel upper and lower chin pod is symmetrically the same. The flange or lip that perimeters the where the chin pod mates to the lower Radome is missing. See the comparison photo with our resin chin pod. The transition from the fixed chin faring (originally the gun faring) on the front lower fuselage to the chin pod is quite abrupt and results in the pod being too narrow. The side Beam Antenna discs are generic in form and all the same size. 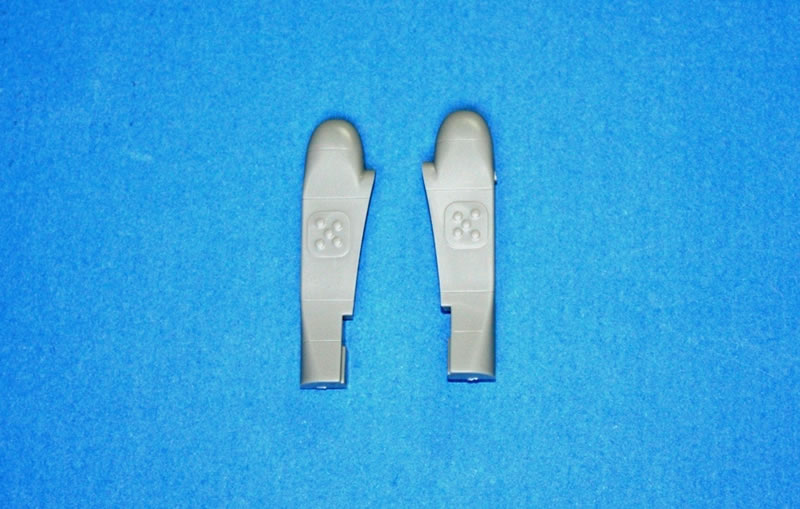 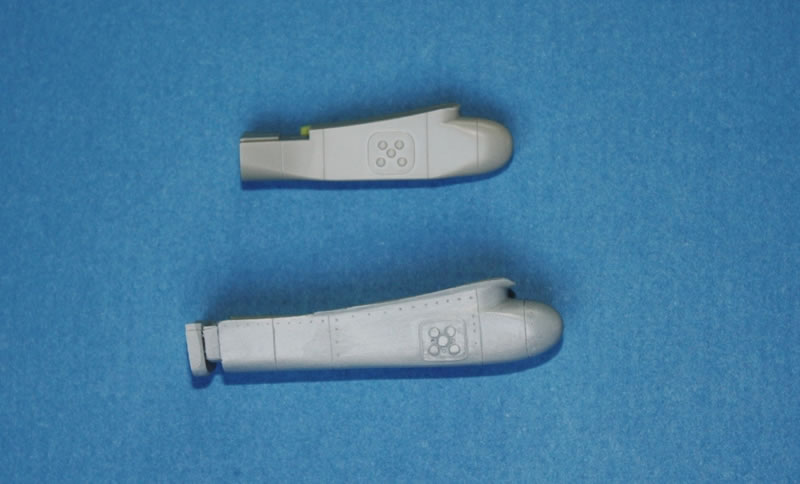 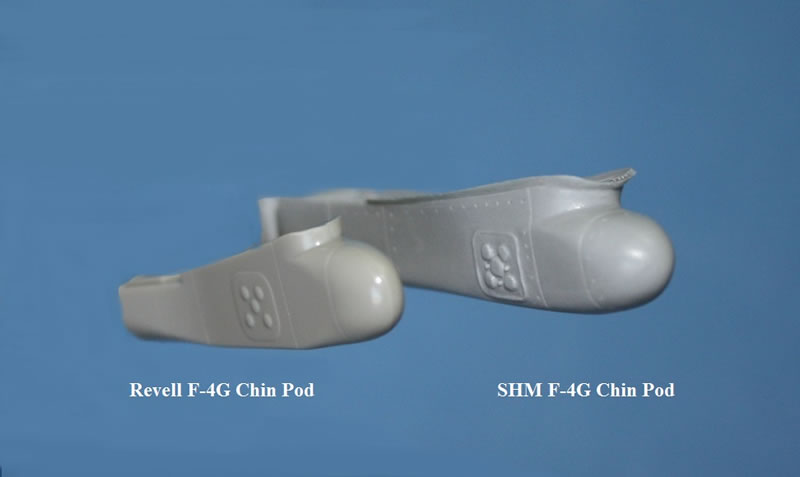 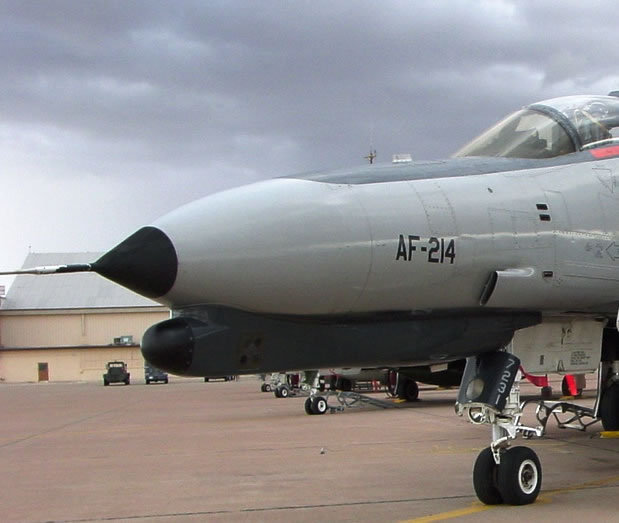 The vertical tail Pod is not too bad, but is slightly under scaled. The two side formation light fairings are too shallow; they should extend a little more outboard. 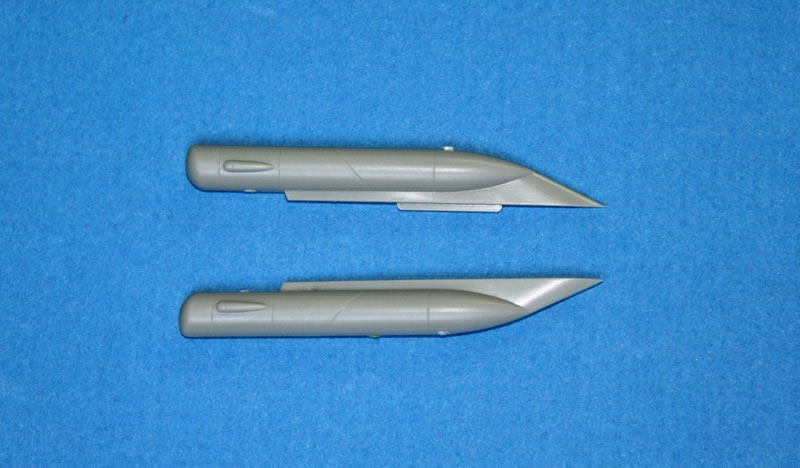 Revell included all new front and rear Instrument Panels. Sadly, the rear IP is poorly done. Both IPs have decent raised detail, though the standoff detail is too shallow for the scale. Some panel relief and panel plates are missing. The rear IP really lacks depth. Making matters worse is that the rear IP is not all that accurate. What I thought was the feed bag (scope shroud) when looking through the parts bag, ended up being the flat face of the scope with no shroud. The entire lower IP is just off. The top and upper row of gauges are over scaled. The upper IP shroud is also missing. Of course, there is no gauge cylinder detail behind the upper aft IP. 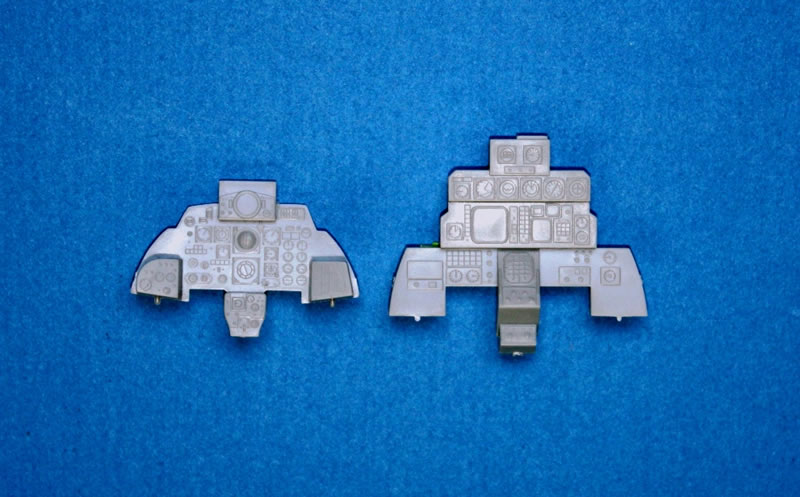 An added bonus is the all new one piece front windscreen. I didn’t like how the original windscreen was stacked over the new one as it resulted in scratches on the sides of the one piece. This should have been packed in its own bag! At first glance the windscreen seemed to have the same profile as the original windscreen, which has a flat top profile, but when compared the profile is indeed round. The overall profile is still a little shallow though. 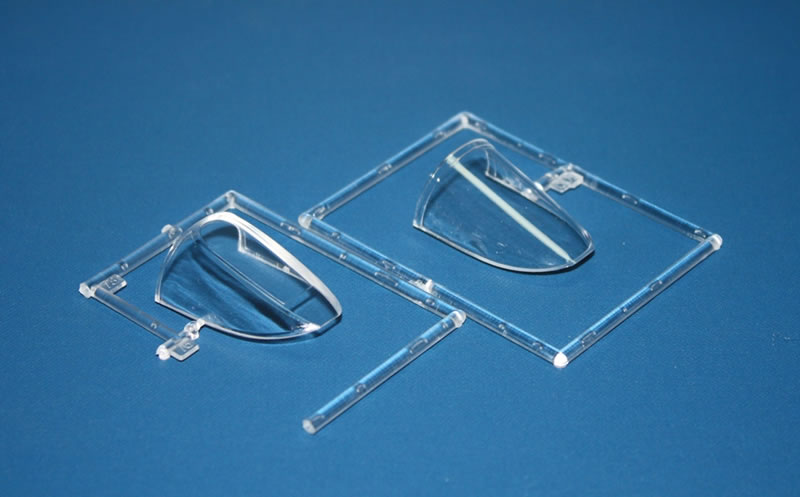 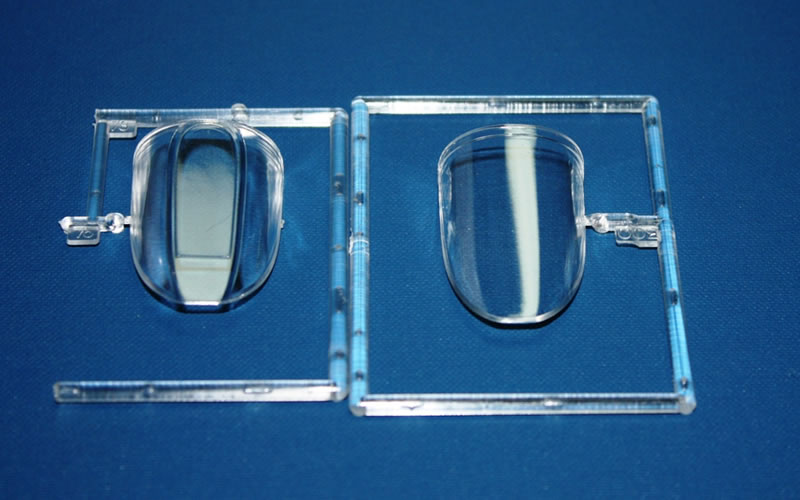 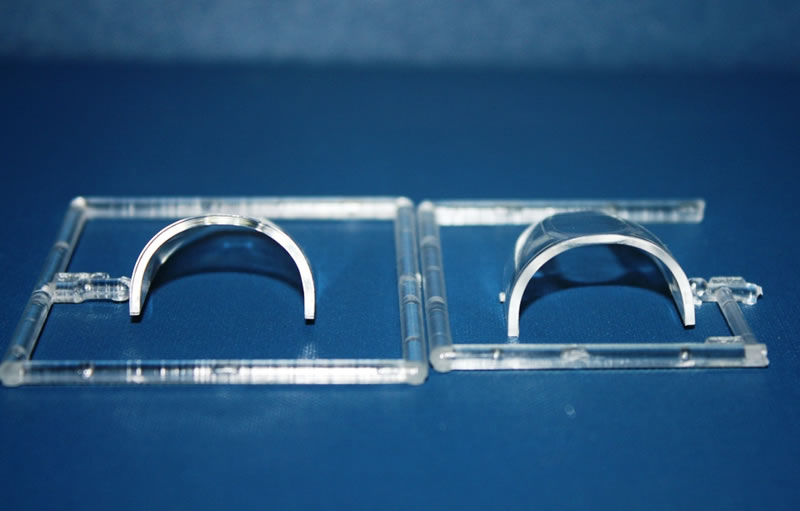 The instructions don’t specify between the tail number was configured with the 1 piece windscreen, but the box photos show the original on the Nell “Pharewell” F-4G. That defaults to the Idaho jet 69-0298 and here’s a photo to confirm that. It should be noted that very few F-4s received the one piece windscreen, so check your references. 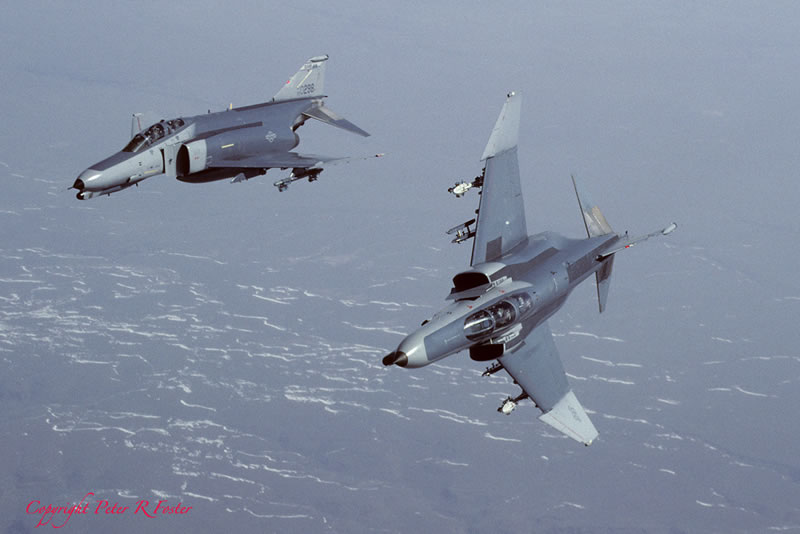 As well all know by now; No AGM-88 HARMs, which is kind of odd since the markings are quite late and non Shrike era. The AGM-45 Shrikes included look decent; much better than Trumpeter’s attempt, though I have not bumped them against the draft and dimensional data I have on them. The LAU-34 launchers look OK as well.

The single AGM 78 ARM has a basic look to it overall. The main body strake fins look a bit shallow and the base fillets are faint. There’s some missing scribing at nose around the rear fin bases. There’s no the aft end is a flat cap. This AGM-78 should be more detailed for the scale. The LAU-78 launcher is basic and unfortunately has major sink trenches the full length of both sides.

The decal quality is nice, but I think I am in the majority here when I say that more significant markings could have been included. Why not some '70s/early '80s Victorville (George AFB) or Spang F-4G subjects? At least there is one line jet option (69-0298), though it’s boring Idaho. I would rather had a Nellis line jet option, though I do believe 298 was a Nellis before Idaho, so I’m sure it can be done. On the plus side, stenciling for the Shrikes and SRM are provided. A decent amount of stenciling for the jet is also provided; probably more than what was on most of the Hill II Gray F-4s. 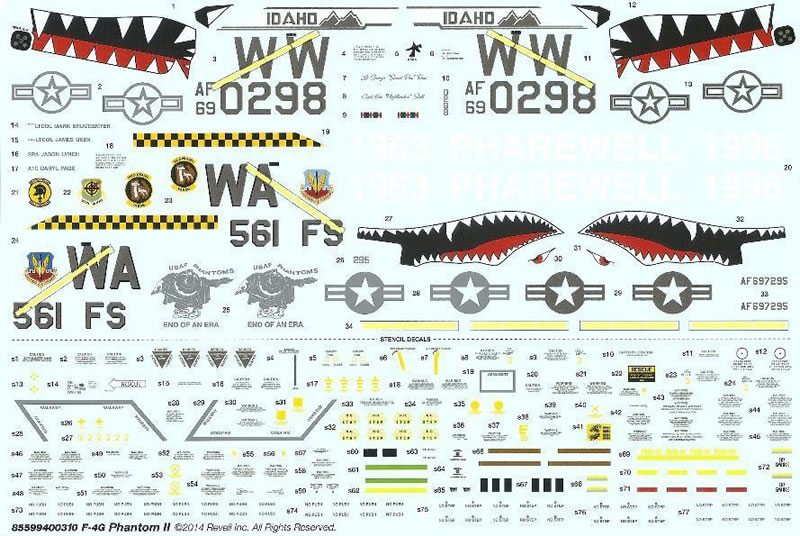 Overall, I am quite disappointed with the F-4G parts overall the fail to accurately depict the F-4G. I do give credit for Revell attempting correcting that pointed nose, but the end result just fell short. Omitting AGM-88s/LAU-118s is a letdown; not to mention they would be appropriate for the late F-4G "Pharewell" markings. Including or tooling in the lower fuselage beef up plating would have been a significant upgrade for the F-4G, but this was omitted as well. However, the AGM-45s and AGM 78 are decent and will be useful, as well the one piece windscreen. The decals, though for the last 2 F-4G units only, are well done and provide stenciling for the jet and new stores.

I don’t want to come off like I am condemning the kit’s F-4G parts in order to promote the Sierra Hotel Models F-4G conversion, but if you want to build an accurate F-4G you really can't do it from the kit G parts. I originally planned to produce a correction set for the Revell F-4G, but after examining the parts more closely, taking into account the missing F-4G antennas, and considering the incomplete nose/Radome fix, we will just continue to offer our complete F-4G conversion set by also recommending it for this new F-4G kit. This shouldn’t discourage anyone from buying Revell’s F-4G kit as not only is it relatively cheap, but you get some useful Shrikes, a Standard ARM, and that one piece windscreen. It’s still a bargain.