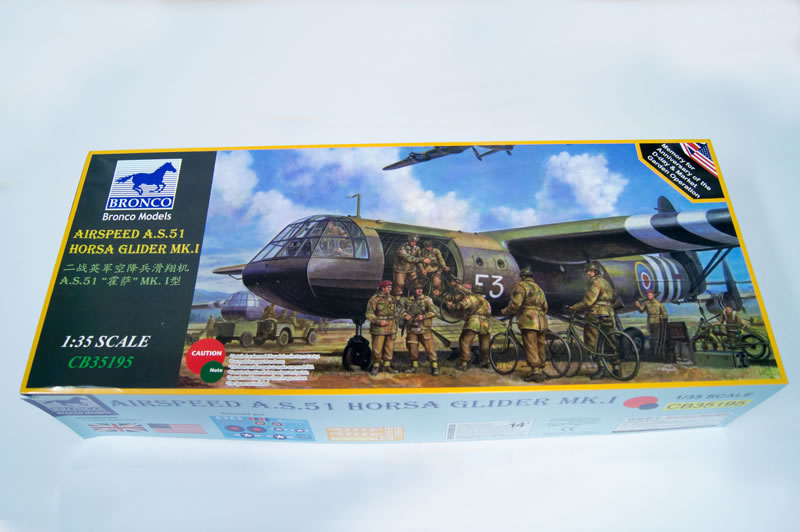 The Airspeed Horsa glider is best known for its participation in the D Day invasion of France, Operation Market Garden and Operation Varsity the crossing of the Rhine, this 7000 kg glider could carry 25 fully equipped troops or a small vehicle such as a jeep.

The aircraft was almost entirely constructed from wood and the over 2000 examples constructed were contracted out to the furniture industry who made the various components that were eventually bought together to form the complete airframe.

I have a personal connection with the Horsa, as my grandmother, who was a french polisher before the war, worked in one of these small factories fabricating the fuselage rings. She told me how one day she made the decision to walk 100 yards up the road from the factory to an empty bus stop as the stop outside the factory was crowded. A V1 buzz bomb came down directly over her, struck overhead power lines and bounced across to the other bus stop killing 30 workers. Apparently my grandfather was shocked at her appearance when she got home as nearly all of her clothes had been blown off!

The Horsa was a large aircraft with a wingspan of 27 meters and a length of 20 meters, in 1/35 scale that equates to a wingspan of 77.14 centimeters and a length of 57.14 centimeters. A large scale kit of this important aircraft has been rumoured for some time and Bronco has now fulfilled modellers' wishes by releasing the Mk 1 with the Mk 2 now announced, the main difference between the marks was the Mk 2's ability for the entire cockpit section to swing open to ease the loading of vehicles, it makes sense for Bronco to release these kits in 1/35 scale as no doubt they will appeal to diorama builders and there are abundant figures and vehicles available to construct any number of scenes.

The kit comes in a sturdy cardboard box with an attractive scene on the front featuring a Horsa loading troops and bicycles, the box art scene is repeated inside on a frame-able sheet which is a nice touch.

The kit is spread across 17 grey plastic sprues:

Detail on the plastic is crisp and flash free with ejector pin marks seemingly only in places that will not be seen once the kit is together, many parts also feature small knockout studs that serve to reduce or eliminate ejector pin marks. A full interior is included from the cockpit through to the extreme rear of the tail section, different configurations allow for either seats for the 25 assault troops or a jeep and small artillery piece to be loaded (the loads are not included).

The large loading hatch in the front section may be posed open and vehicle ramps are provided so that you can load your jeep of choice, indeed all hatches and doors are poseable and with the tail section able to be displayed removed from the aircraft diorama ideas abound.

The model is constructed just like the real aircraft with the interior first made up from a series of round ‘hoops’ and floor sections which are then skinned with the outer fuselage panels as opposed to the conventional 2 fuselage halves sandwiching the interior method we have become used to, it remains to be seen how it all fits but certainly the interior will have to be aligned perfectly for the skins to fit.

Sprue A is mostly concerned with the rear fuselage and rudder. The rear fuselage is detailed inside and out and can be displayed separated from the aircraft as in reality upon landing the tail section could be removed to assist unloading. The large rudder comes in left and right halves and features what I would say is overdone fabric effect however this is a minor gripe to otherwise excellent mouldings. 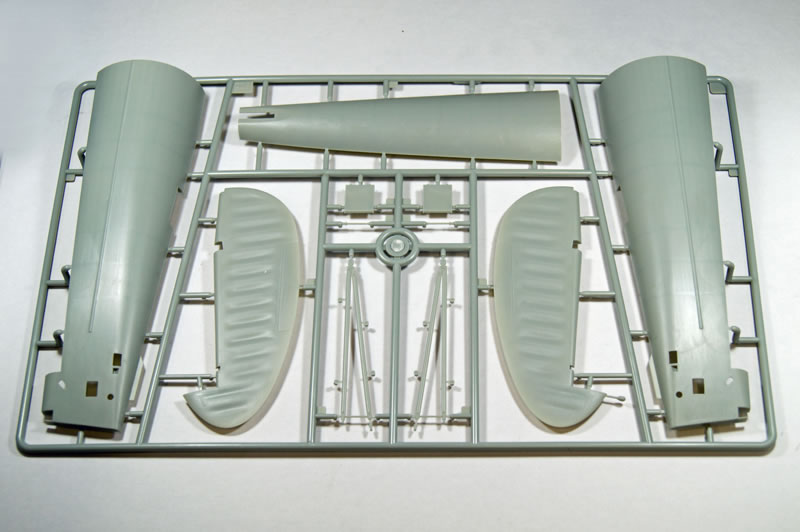 Sprue B features the wing centre section skins and the rear half of the aircraft's belly, I should mention here that the forward two-thirds of the fuselage are constructed like the real thing, hoops are added to the floor and fuselage skins added around them, this allows for full internal detail however a neat result will be reliant on the skins fitting perfectly around the internals which will need to be constructed in perfect alignment. 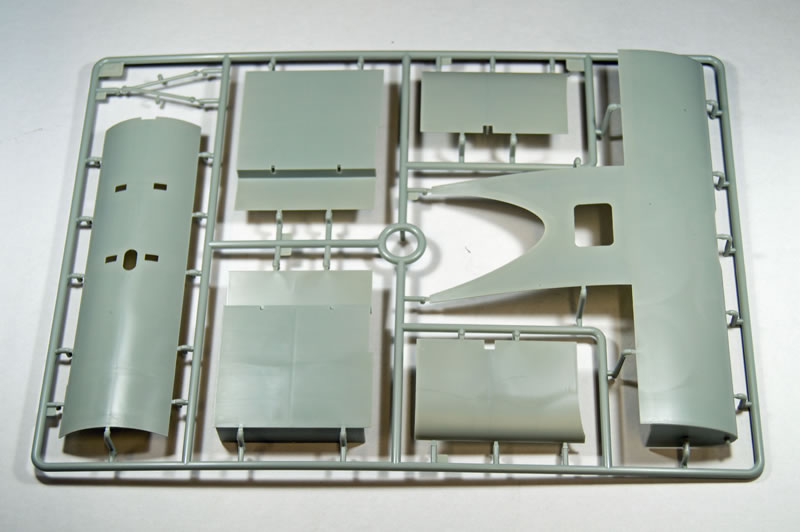 Sprue C includes the fuselage top skin, floor elements, some wing internals and cockpit parts. The instrument panel is basic but then again so was the real thing, dials are moulded on to which you apply the supplied decals, seat belts are moulded onto the seats, you may love or hate this feature but they should look OK painted and washed. 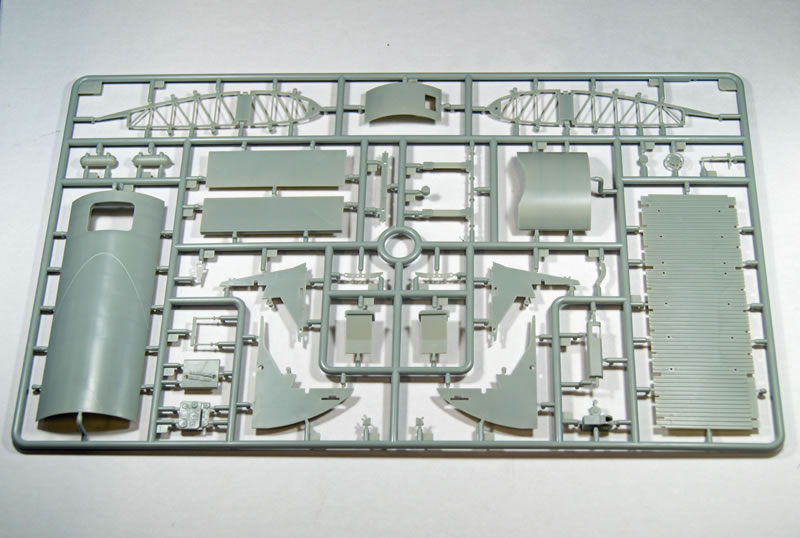 Sprue D contains the hoops that my gran made in real life! There are 8 of them and care needs to be taken as they are all slightly different and I think that mixing them up could be fatal to your build! 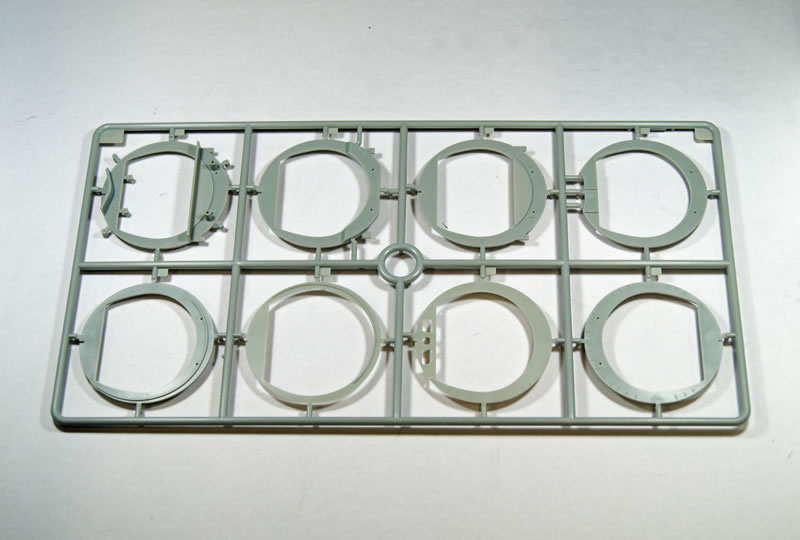 Sprue E holds the empennage. These appear to be very simple affairs and lack exterior details exactly like the real aircraft as these were made of wood, again moulding is flawless. 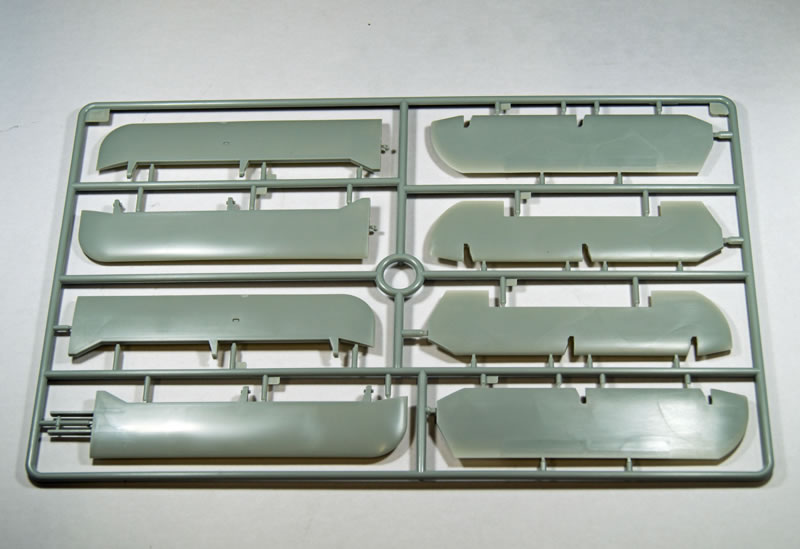 Sprue F, fuselage skins, wing internals, spoilers and parts of the large skid that was located under the belly as part of the main landing gear, I could not locate any ejector pin marks on any of these parts, very impressive. 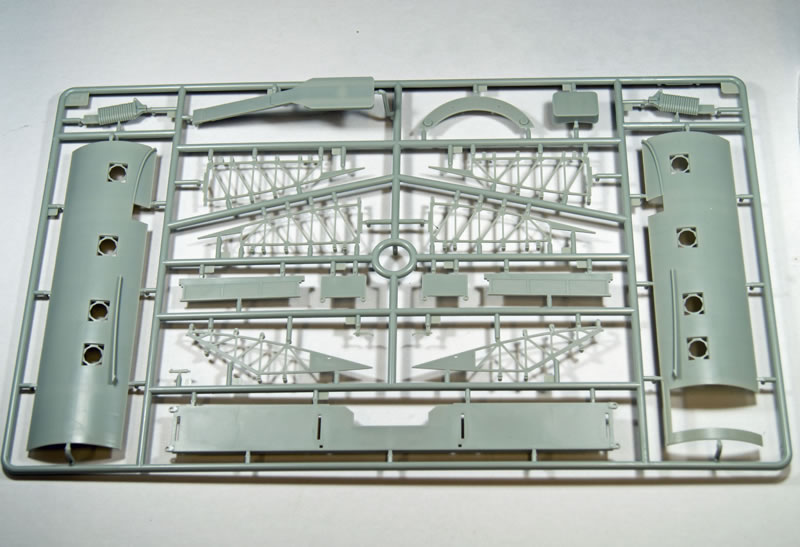 2 sprue Gs are included. They feature internal parts (more of those moulded on seat belts), wing skins and the main wheels which are bulged and flattened, I like this feature however if one wishes to display the model in flight they would need re-modelling, not really a gripe but 2 sets could have been supplied? 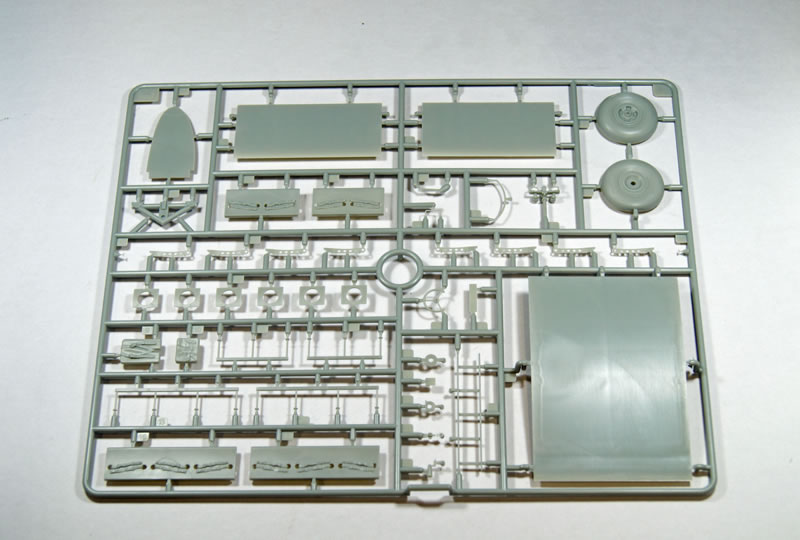 These sprues are concerned with the port and starboard wings, again like the real aircraft quire plain, I snipped off one set and taped them together to test the fit which is really nice, these large wing parts feature sturdy internal bracing so should remain nice and straight. 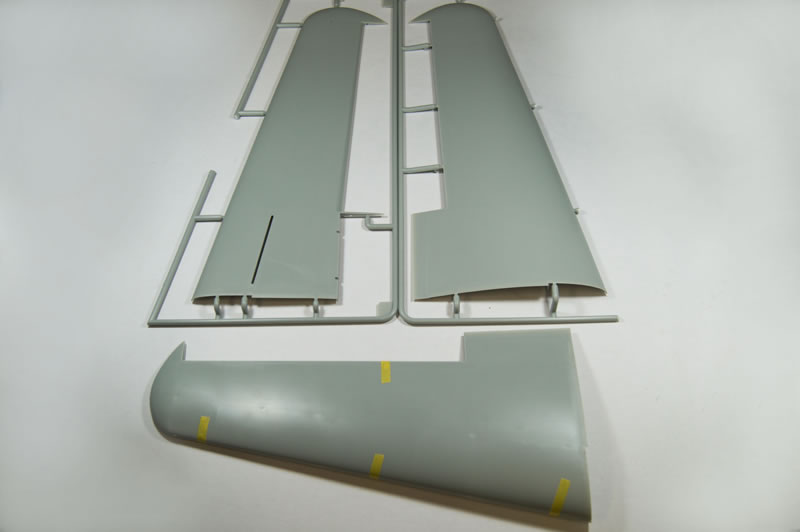 Sprue J, the tail and its internals allowing display off the model. Again ejector marks are only on the reverse (unseen) sides of the parts. 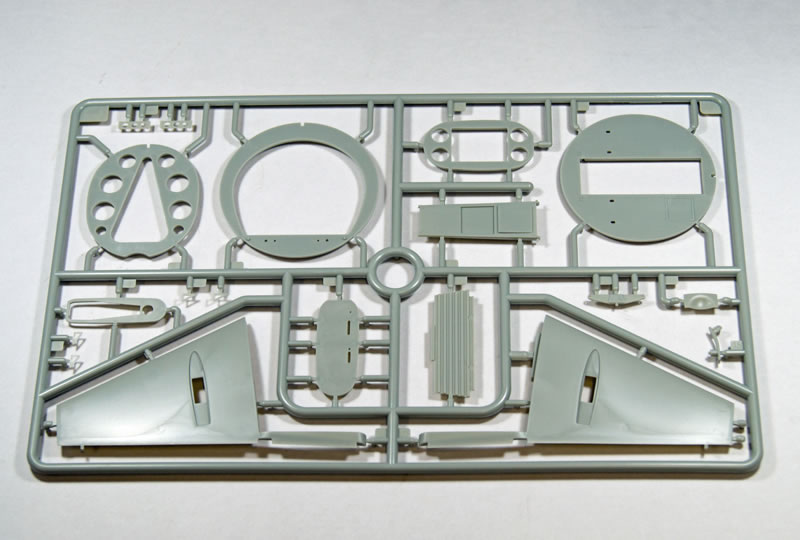 Sprue K has the outer shell of the cockpit, the nose wheel (again bulged and flattened) more flooring and fuselage shell. 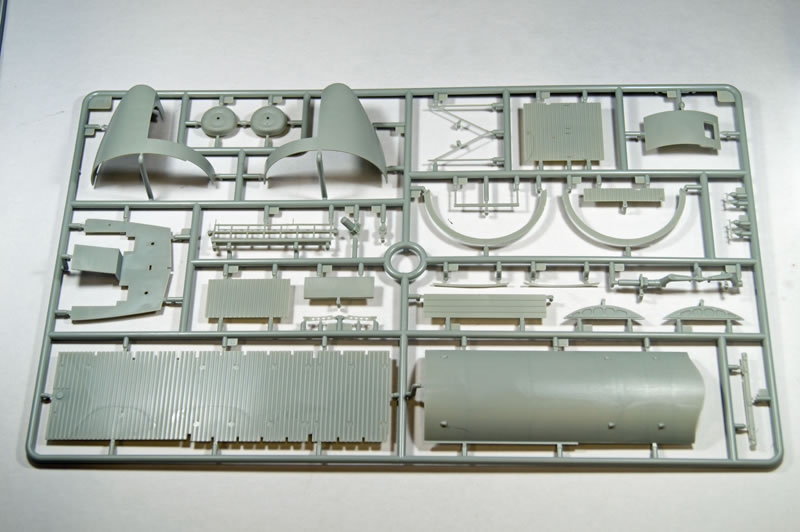 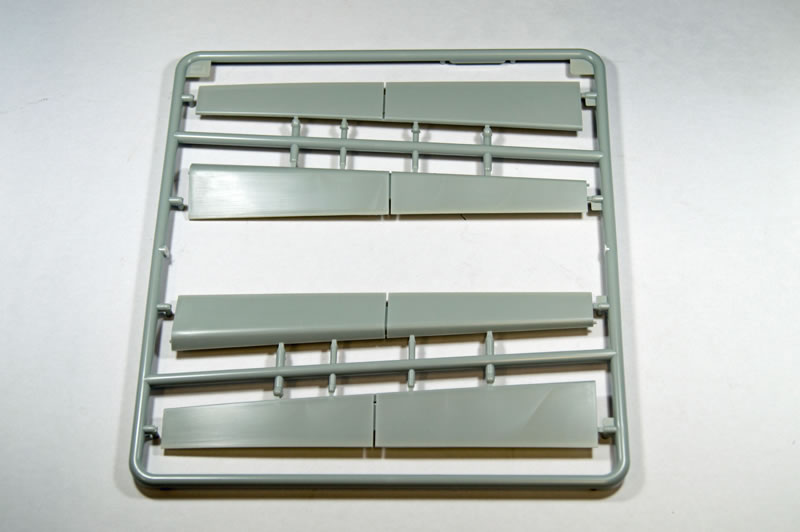 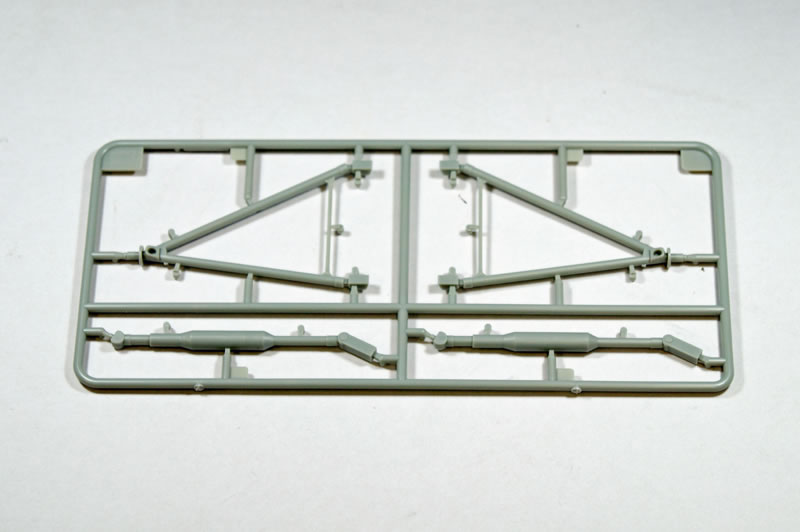 Sprue N is attached to Sprue P of which there are 2, one is loose one is attached to N, Sprue N contains fuselage skins and internal bulkheads while sprues P contain the stringers that join all the internal hoops and bulkheads. 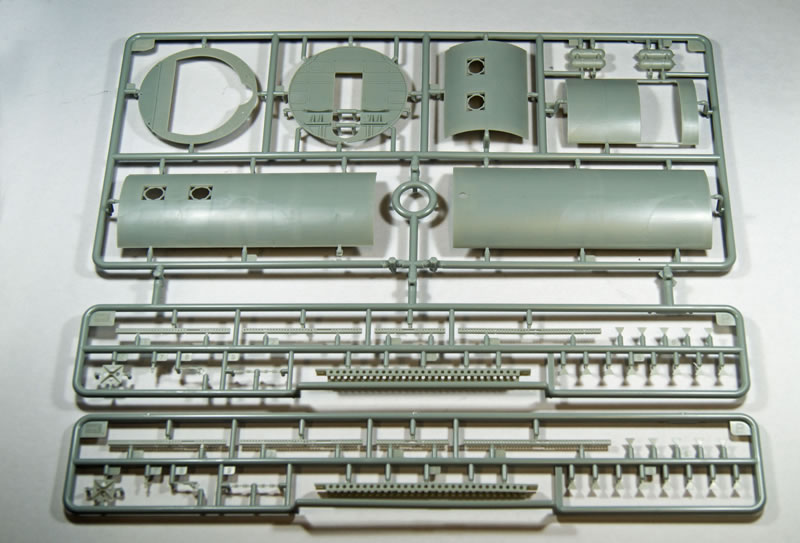 The clear parts are nice and clear, mine weren’t scratched at all despite all 3 sprues being loose in the one small bag, Bronco could have wrapped these in foam or similar like some other manufacturers however again this is a very minor criticism. 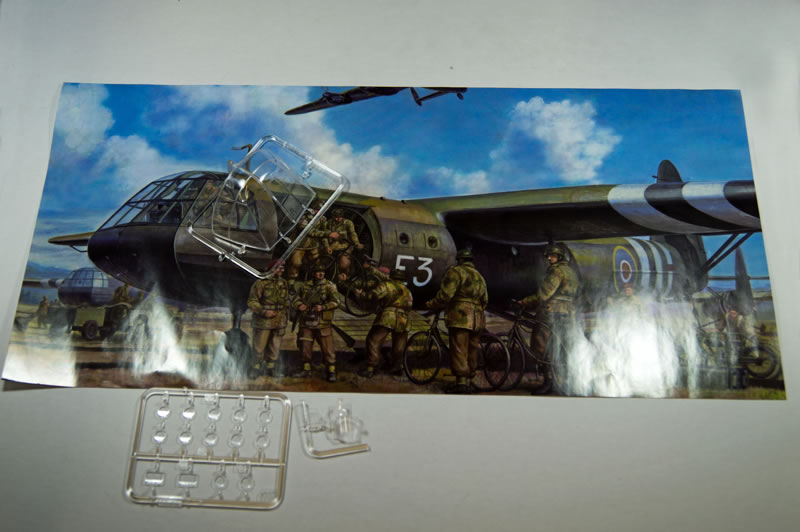 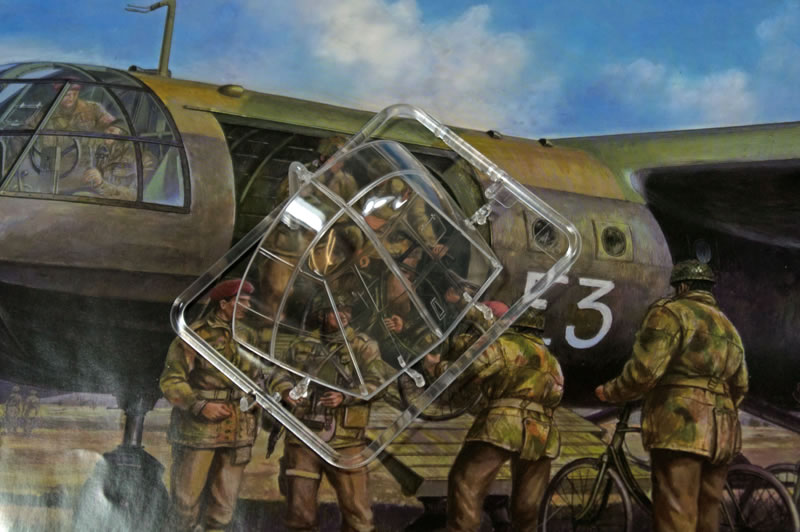 The kit PE fret is very small and features pilots’ seatbelts and some parts for the troop seats. 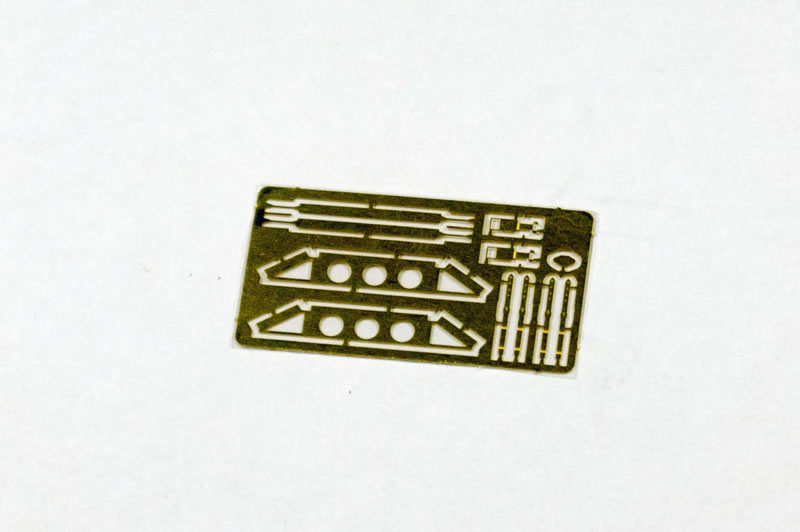 Strangely the included weight that prevents the kit from becoming a tail sitter is found within its own cardboard box, this prevents the weight from sliding around and damaging the plastic however why couldn't the clear parts have been placed into their own box as well? Either way the weight is a great idea as it fits exactly and should do its job of preventing the model becoming a tail sitter perfectly. 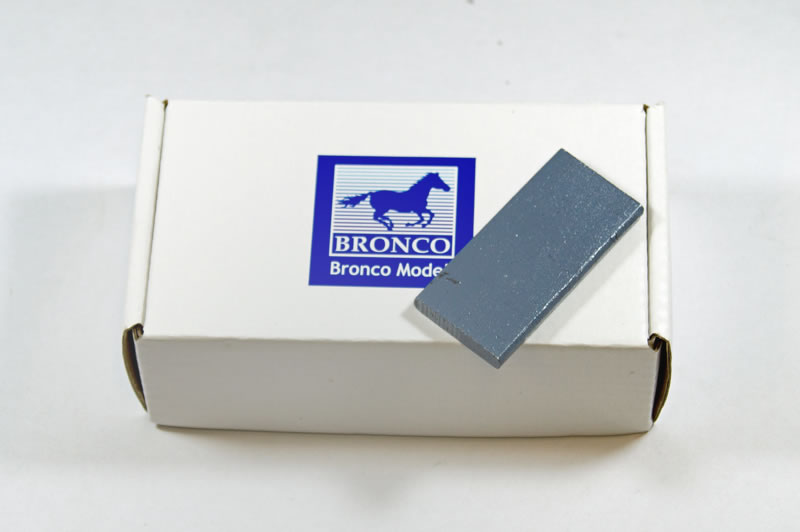 The decals look good to my untrained eye, no printing company is mentioned so I can't vouch as to how they will perform as I haven’t used Bronco decals on any kits previously, 3 options are provided: 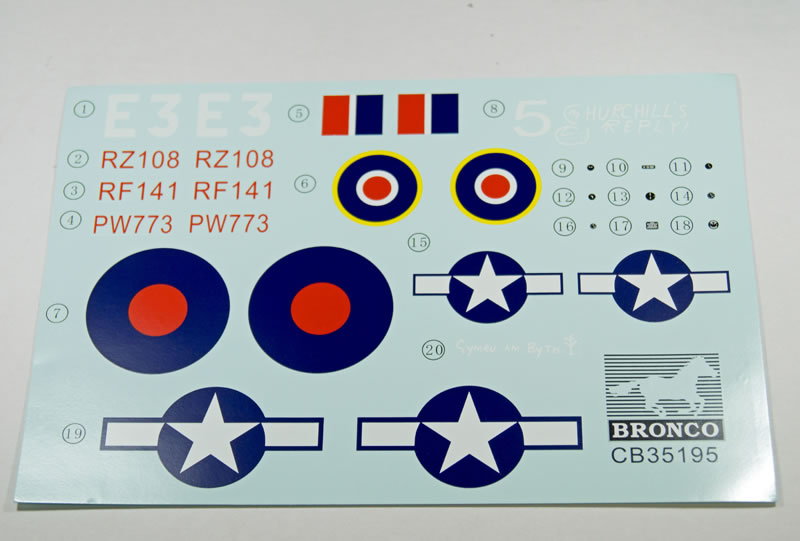 All are night underneath with standard dark earth and green uppers, invasion stripes must be masked and painted by the modeller (dimensions in 35th scale are provided).

A pre-cut masking set is provided for all of the glazing which is a nice touch. 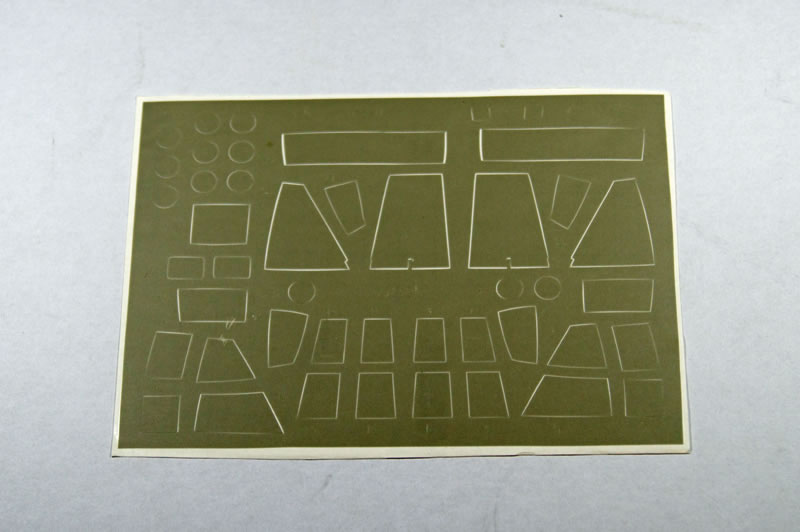 I quite like the instructions, they take the form of black and white exploded diagrams and full color painting guide, this is a complex model, alignment of the various components is essential, the instructions guide you through the process quite well, are clear and printed on glossy paper stock. 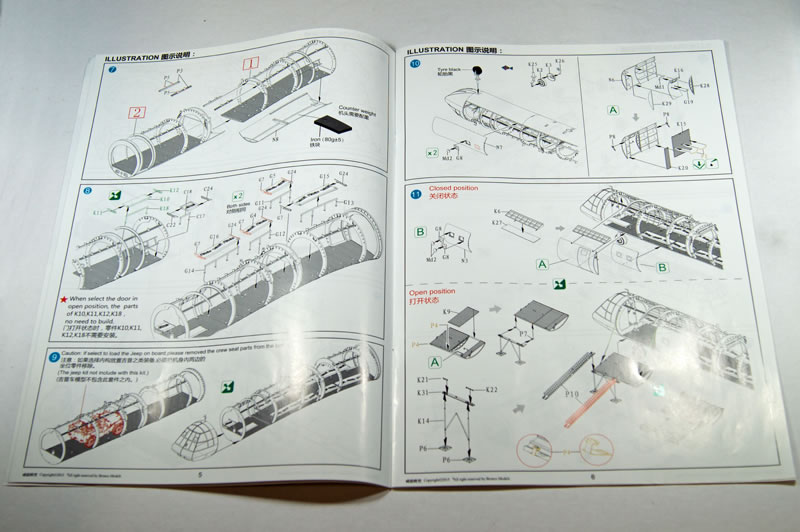 I like this kit and thoroughly recommend it to anyone interested in this important aircraft, as this is only an in-box review I can't speak as to its accuracy but it certainly looks like a Horsa, the fit of the wing parts I taped together bodes well for the rest of the model but again until I start putting her together I can't say. The model is very versatile, can be displayed in several configurations with options for different loading doors to be posed as the modeler wishes.

The diorama possibilities are many and for this reason I see no problem with the kit's scale of 1/35 rather than 1/32 but beware as the way the model is constructed means that small errors in alignment early will compound to make for big headaches later on.

Based on what I have seen of the kit's contents I recommend this kit, pricey but worth it for the amount of plastic one gets even without an engine to build!