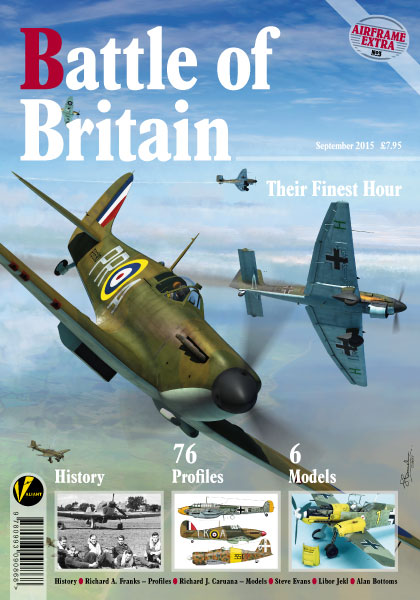 This 20-page section is written by Richard Franks, a Valiant Wings regular. Franks winds his way through a chronological narrative of the official 17-week span of the battle, with each day dealt with individually. The style is anecdotal, and given primarily from the British side of the conflict. While hardly the most in-depth, detailed or comprehensive examination of this most famous of air wars, it is nevertheless extremely interesting, and a handy primer for the key events and dates. It's also packed with interesting snippets about the pilots and their exploits, and is a very enjoyable read overall.

As with all the profiles in the book, this section is illustrated by Richard Caruana, and features 10 pages of colour profiles, covering a remarkably wide variety of aircraft types, given the strong historical association of the Battle of Britain with Spitfires and Hurricanes. They're both covered extensively, of course, but so are Ansons, Battles, Beaufighters, Beauforts, Blenheims, Gladiators, Defiants, and more besides. A very nice selection indeed, and full of inspiration for future builds.

The first model build in the book is Libor Jekl's impressive take on Airfix's new-tool 1/72 Defiant Mk I. The build is depicted in typical magazine style, with step-by-step photos and captions, fleshed out by an explanatory narrative. His eight-page build notes a few shortcomings of the new Airfix kit, and how to deal with them. The result is a very impressive model indeed.

Each of the model builds in this title end with a section entitled "Historical Significance", wherein that particular aircraft's role in the conflict is elucidated. It's a nice touch, and saves the historical section from becoming bogged down with such tangents.

Next up Jekl tackles the Airfix 1/72 Hurricane Mk I kit. This is another newly-tooled kit from Airfix, and the author augments it with a small selection of aftermarket parts from Quickboost, Valiant Wings Model, and PART. The end result is most impressive. The style and length are the same as the previous build.

The next section is another model build, this time featuring Eduard's 1/48 Bf 110C, by Steve Evans. The style is similar to the previous builds, though slightly shorter at six pages. The result, however, is excellent.

This seven-page section features profiles of all the usual Luftwaffe subjects of the era, including a selection of Bf 109s, Ju 87s, Ju 88s, Bf 110s, Do 17s, He 111s, and a single He 115. Once again, plenty of inspiration if you're looking for some!

Steve Evans is back, this time building the new Revell 1/32 Spitfire Mk II kit. This six-page build is pretty much out-of-the-box, and the result is, once again, terrific - though I'm not convinced by the choice of Dark Green used.

The next section makes it three kit builds in a row, with Steve Evans tackling the Trumpeter 1/32 Bf 109E-3 kit. Once again, the build is pretty much out-of-the-box, though a little more substantial at eight pages. Evans finishes his model as Joseph Priller's machine, and it looks great.

The final build of the book features the prolific Steve Evans again, this time tackling the Special Hobby 1/32 Fiat G.50 kit. Once again, it's a largely out-of-the-box build, with just some additional detailing added to the engine. Evans details how he achieved the intricate three-colour camouflage scheme, which looks terrific on the finished model. It also makes for an interesting variation from the RAF and Luftwaffe schemes featured in the other builds.

This is the final section of the book, which is three pages covering a range of Italian aircraft of the Regia Aeronautica. Only three aircraft types are covered: the Fiat BR.20, the Fiat G.50, and the Fiat CR.42. It seems the Italians owe their participation in the Battle of Britain to Fiat! 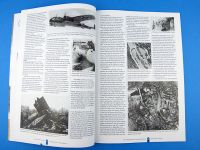 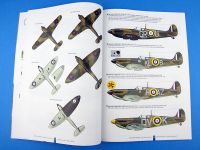 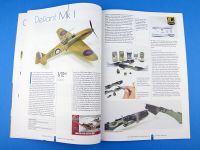 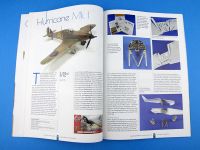 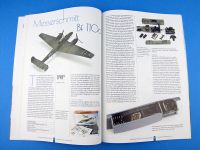 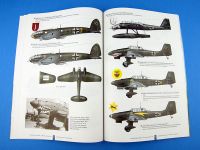 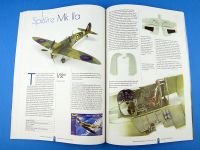 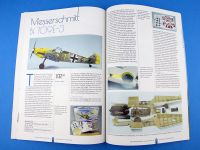 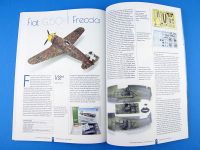 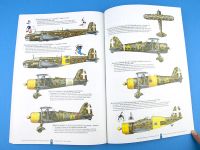