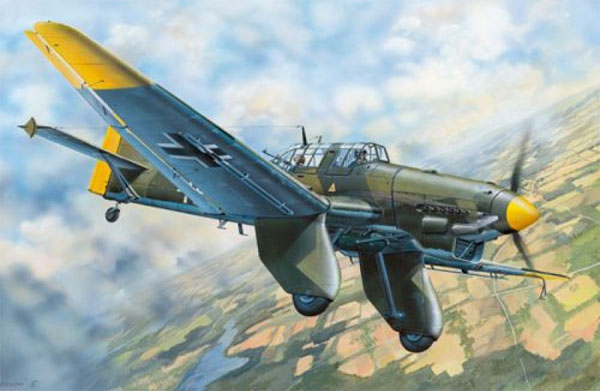 Wow - another subject that I thought we'd never see in my favourite scale. Yes, it's been available for a couple of years, but I've only just acquired one and, well, it appears that we've never reviewed it before. This is a subject so full of character; one of the world's ugliest aeroplanes, the Stuka, gets beaten even more by the ugly stick in it's early, 'Anton', version.

So ugly it's way cool - to my eyes anyway!

The kit is the now fairly standard Trumpeter fare, cleanly moulded in grey styrene, with engraved panel lines and a matt surface. All sprues are individually bagged in the brand's usual sturdy box - so the parts are pretty well protected.

Parts breakdown is fairly normal for a kit of this type, with some great details in the cockpit. The wing structure features a stout looking spar that should ensure that the wings are mounted straight and true, and that the resulting structure is nice and strong.

Accuracy-wise this kit has it's share of 'interesting' features - those that want to improve the look of their early Stukas may want to replace the spinner, make some changes/improvements to the cowling and re-shape the wheel spats (fortunately a case of generally removing material, rather than adding). None of these changes should tax the average modeller, but, once again, it's a pity Trumpeter couldn't go that extra bit and get everything looking as it should.

For a heads-up on some of the improvements that can be made to the kit, take a look at John's superb build.

These are important on a subject like this with a large canopy and I'm pleased to report that these components look good, being thin and nicely clear.

These 'rubber' tyres look OK, but, like most modellers, I'm wary of their longevity and possibility of reaction with the wheel hubs. I'll be replacing mine with resin items.

Typical Trumpeter fayre, the instructions are straightforward and clear. 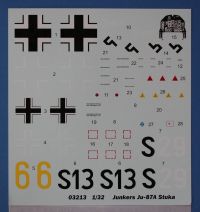 Schemes are a little bland - two fairly boring Luftwaffe machines - it would have been nice to have seen a Spanish Civil War Legion Condor scheme included. 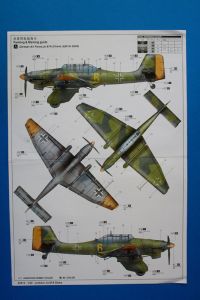 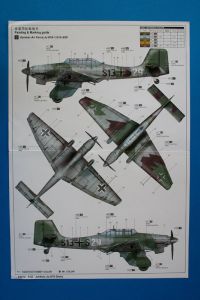 Whilst this kit has a few disappointing features it is the best 1:32 Ju87A on the market (it's also the only one!) and, subject to a few relatively easy 'tweaks' I can actually recommend this kit to all fans of ugly, characterful, mid '30s, Spanish Civil War period aircraft.

Review model courtesy of my wallet.