Ted Dyer is a new name to me in the world of WWI figure scupting/casting, and when I stumbled across his items on a wild eBay search, I was quite intrigued. Several emails and a two days later, the purchased figures plus several additional review samples (thank you, Ted) arrived at my house. The figures were inside zip-lock bags and safely packaged in a priority mail box, inside another priority mail box.

Ted has sculped these figures "on the larger side as if they were closer to 6 feet tall when in gear," and it shows as the standing crew appears slightly taller than some other WWI figures to my eye. A nice addition to each of the sets I received is that the heads are cast separately and in most cases, multiple heads are included so the builder has options to suit their preference.

Reviewed here are a sample of Ted Dyer's pilot figures:
1: German two-seater crew (pilot and observer seated). This set is designed to fit the Wingnut Wings LVG C.VI but should also fit other two-seaters with little-to-no modification. The pilot's arms are cast with the body, and the observer is depicted as turning around, with arms cast separately. 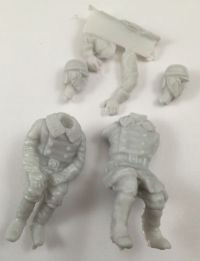 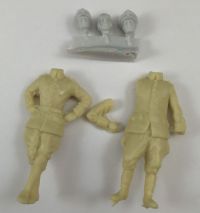 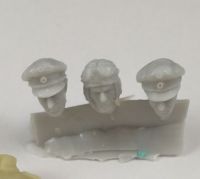 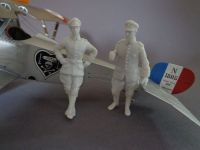 3: Standing German gunner. It appears that when assembled, the gun will be held on the right side of the waist. This one looks great when tacked together and placed in my unfinished Gotha! 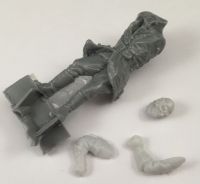 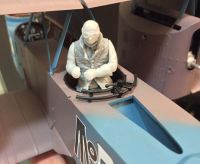 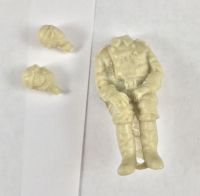 Most of the figures have a glossy finish and feel a little waxy or oily - likely mold release agent that will disappear with a gentle cleaning in soapy water. Details sculpted have been nicely replicated in resin without air bubbles, and I noticed only three very faint mold separation lines in total. A few finer details such as belt buckles and buttons appear a little bit oversized or faint on the seated pilots, though this may also be my being not very familiar with WWI flight gear. The heads across all sets look very nice and have noticeably different facial features, and the way standing gunner's jacket is depicted blowing in the wind is absolutely superb

Ted's figures can be bought directly from Ted Dyser, either by email or through eBay (seller "dyercats"). It's nice to have some additional figure options and poses available, and I recommend these to all builders.