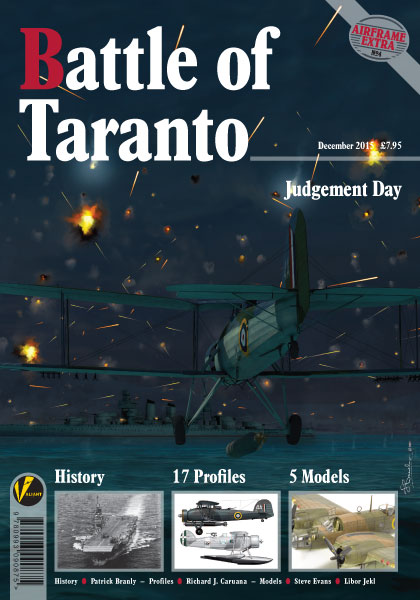 This 16-page section is written by Patrick Branly, and covers the context, preparation, conduct, and aftermath of Operation Judgement on the 11th & 12th of November 1940. This involved a British attack on the heavily defended Italian port of Taranto, and came to be known as the Battle of Taranto. The format follows a basic chronological description of events, with context given where appropriate. One interesting snippet that I wasn't aware of, is the idea that the Japanese might have used the successful British attack to inform their own planning for Pearl Harbor a little over a year later.

With only a relatively brief historical narrative, and fewer pages of colour profiles than is usual, the bulk of this issue it taken up with the five included model builds. And first up is Libor Jekl, who tackles Azur's 1/72 scale Martin Maryland. If you've seen any of Jekl's builds in previous Valiant Wings publications, you'll already know that this one is excellent. Azur's short-run kit is a bit of a handful, but Jekl handles its various challenges with aplomb.

Each of the model builds in this title end with a section entitled "Historical Significance", wherein that particular aircraft's role in the battle is elucidated. It's a nice touch, and saves the historical section from becoming bogged down with such tangents.

Next up Steve Evans tackles the Italeri 1/72 Cant Z.501 flying boat kit. This kit originally dates from 1973, but you wouldn't know it from the results Evans achieves with it. It's another superb build, and looks resplendent in its silver dope finish and early-war Italian markings.

Like the others in this issue, the build is depicted in typical magazine style, with step-by-step photos and captions, fleshed out by an explanatory narrative.

This single-page reference lists each of the major colours used by British and Italian aircraft, and matches them against paint numbers from nine different brands - five acrylics (GS Mr Aqueous, Humbrol, Lifecolor, Tamiya & Xtracrylix) and four enamels (Humbrol, Revell, White Ensign, & Xtracolor). Terrific stuff, and a fantastic bit of value-add, especially when it comes to those elusive Italian colours.

Libor Jekl is back, this time building the new Airfix 1/72 Swordfish kit. This ten-page build is pretty much out-of-the-box, apart from an Eduard 'Zoom' set, and the result is, once again, terrific.

As with all the profiles in the book, this section is illustrated by Richard Caruana, and features three pages of colour profiles. These consist of four Fulmars, four Swordfishes, and a single Maryland. The selection is necessarily small, but there's some nice inspiration there for Trumpeter's big Swordfish kit.

The amazingly prolific Steve Evans now turns his hand to MPM's 1/48 scale Fulmar kit. The style is similar to the previous builds, and the result is just as excellent.

The last model build in this issue is again by Steve Evans, and features Italeri's Fiat CR.42 kit. Once again, it's a largely out-of-the-box build, though the intricate camouflage finish is extremely well executed. I immediately began to imagine how impressive it would look on the Silver Wings 1/32 kit.

This is the final section of the book, which is three pages covering a range of Italian aircraft. Only three aircraft types are covered: the IMAM Ro.43, the CANT Z.501, and the SM.79. Sadly, none of these aircraft are available as mainstream injection-moulded kit in 1/32 scale, but we can only hope! 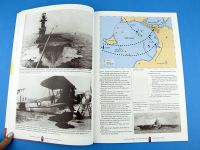 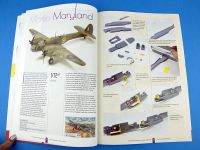 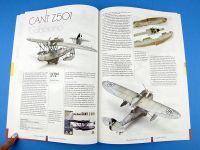 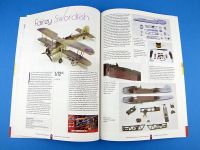 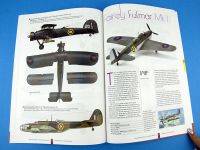 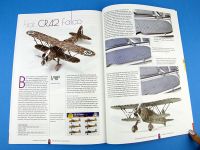 This is the shortest of the Airframe Extra series so far, which is no surprise given that the conflict covered is also the briefest so far. Still, its blend of interesting history, attractive artwork, and impressive model builds is nearly perfect. The magazine format is highly accessible, and can be used as a launching pad for more comprehensive research endeavours. Recommended!