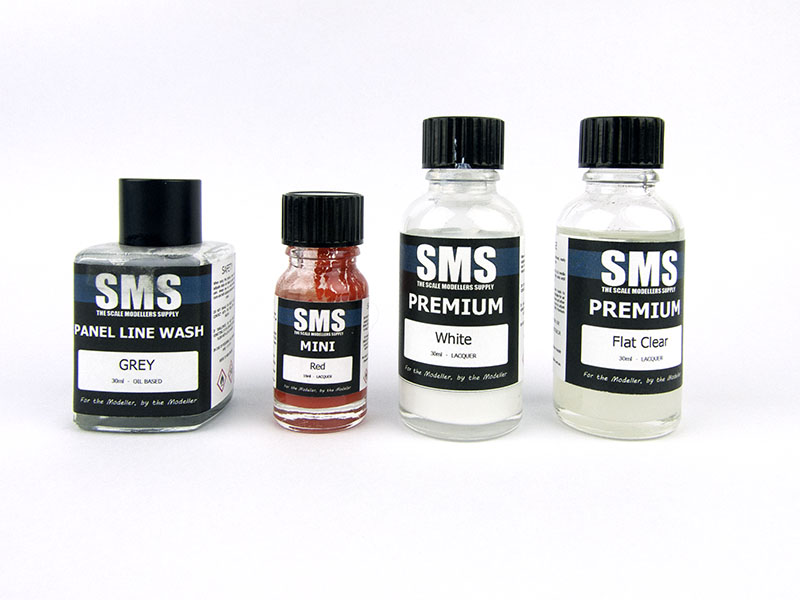 During the recent 2016 Australian Model Expo, I was able to catch up with Scott Taylor of The Scale Modellers Supply. Scott explained to me that he was introducing a range of locally-produced lacquer paints under the SMS brand, in response to the difficulty Australian modellers generally have in obtaining overseas-manufactured lacquer paints, such as Mr. Color and Mr. Paint. Scott has taken the excellent Mr. Paint range as the benchmark, and aims to deliver a readily-available, locally-made product to match it.

Scott supplied me with a small selection of samples to test and review, representing the range of products SMS is currently bringing to market:

The paints are supplied in glass bottles with plastic, screw-top lids.

In order to put these new paints through their paces, I dragged a pair of Revell 1/48 MiG-21 tail fins out of the spares box: 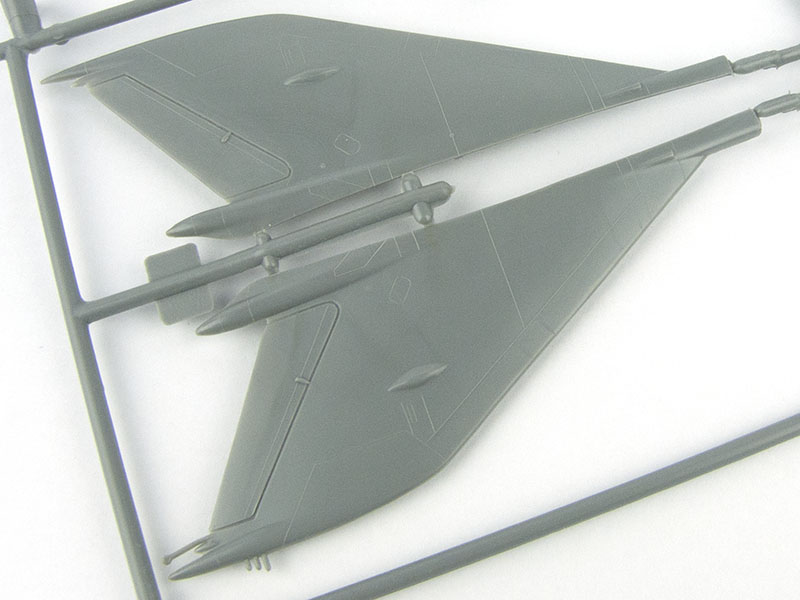 I did nothing more to prepare the surface than give the parts a wipe-down with a cotton bud dipped in Windex (an ammonia-based window cleaner). Scott told me that these paints were good to go over bare plastic, but I decided to give one of the fin halves a couple of light coats of Tamiya Fine Grey Primer, just so that I could test both scenarios: 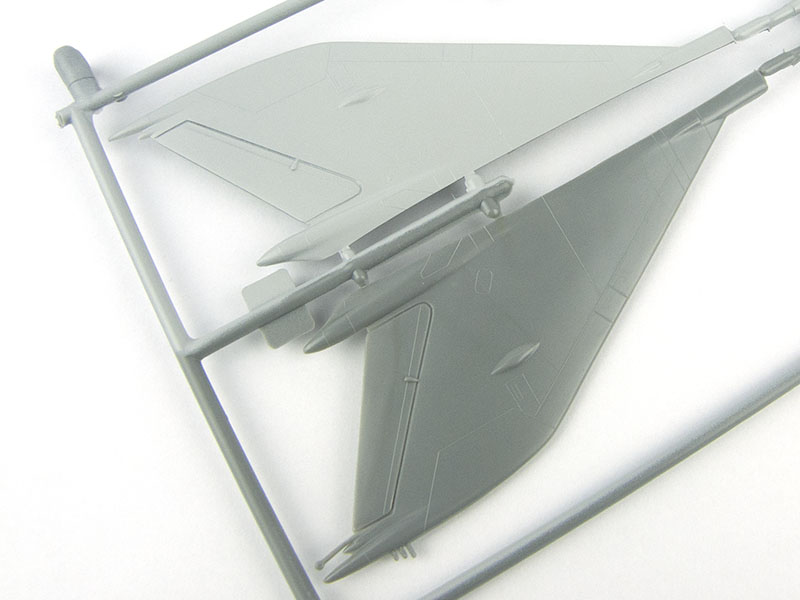 These colours are billed as Pour and Spray, meaning that they're pre-thinned for airbrushing, so I proceeded with my testing on that basis. I used my Iwata HP-C Plus airbrush with a 0.3mm needle, and the compressor set at the recommended setting of between 15 and 20 PSI.

I started with the white, and added some to the colour cup of my airbrush. It seemed a little thick to me, certainly much thicker than Mr. Paint straight out of the bottle. However, it sprayed nicely, and produced a respectable finish after only two light coats: 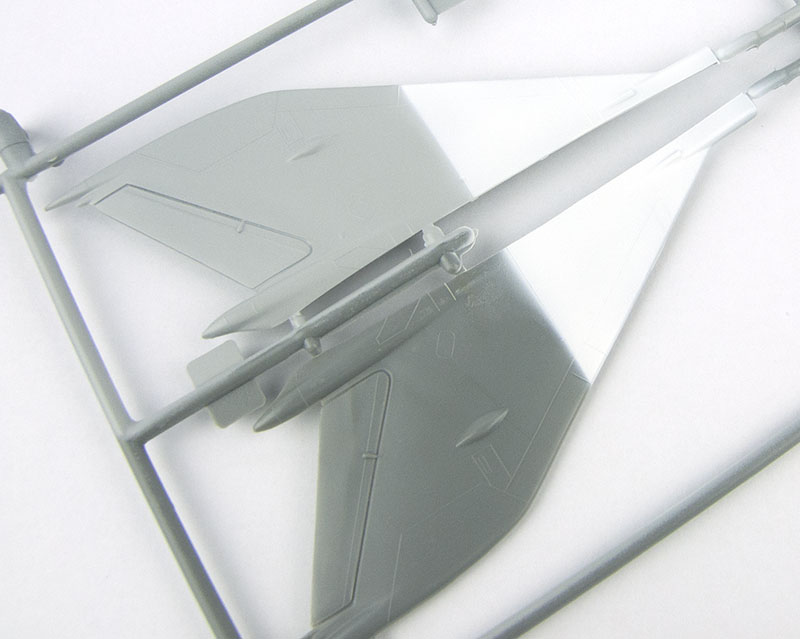 I was especially impressed with the pigment density and resultant coverage, which was easily as good as any white I've ever used. This may account for some of the additional thickness, but I'd be opting to thin it slightly in future, and build up the opacity in thinner layers.

The paint performed pretty much the same over both the primer coat and bare plastic, with no visible difference in the coverage or opacity in each case.

Another really impressive feature of these paints is the drying time, which, as you'd expect with a lacquer-based paint, is quite fast. In this case, I was able to apply a second light coat of white to the first fin half as soon as I'd finished applying the first coat to the second fin half. It was literally touch-dry in seconds.

Up close, some slight orange-peel is noticeable, but thinning the paint to something closer to a milky consistency is all that's required to deal with that. 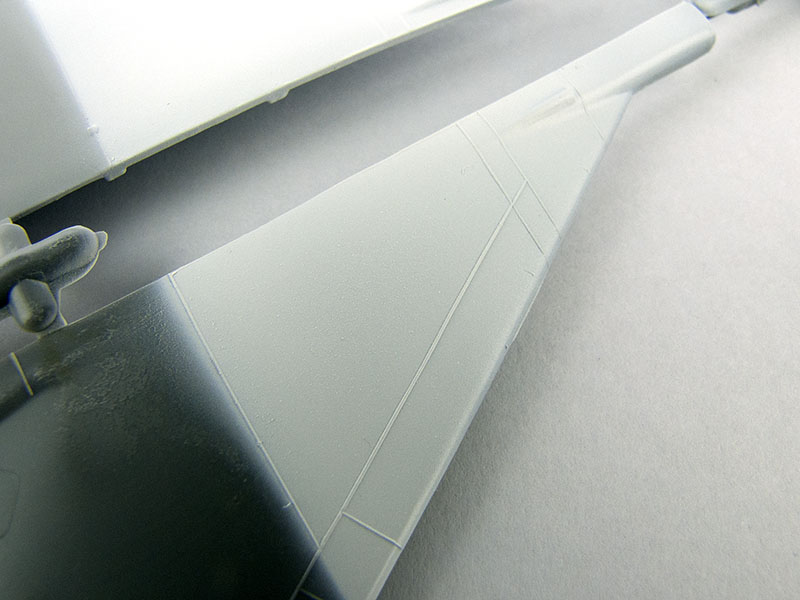 When I opened the bottle of red (no, not that sort of red!), I noticed that it was quite a bit thicker than the white, and it didn't really appear to be suitable for airbrushing straight out of the bottle. Nevertheless, I masked off the previously-painted white areas, and proceeded as before, pouring some of the red paint into my airbrush cup.

To my surprise, it actually sprayed rather nicely, without any of the spitting or clogging that I'd expect from paint at this consistency: 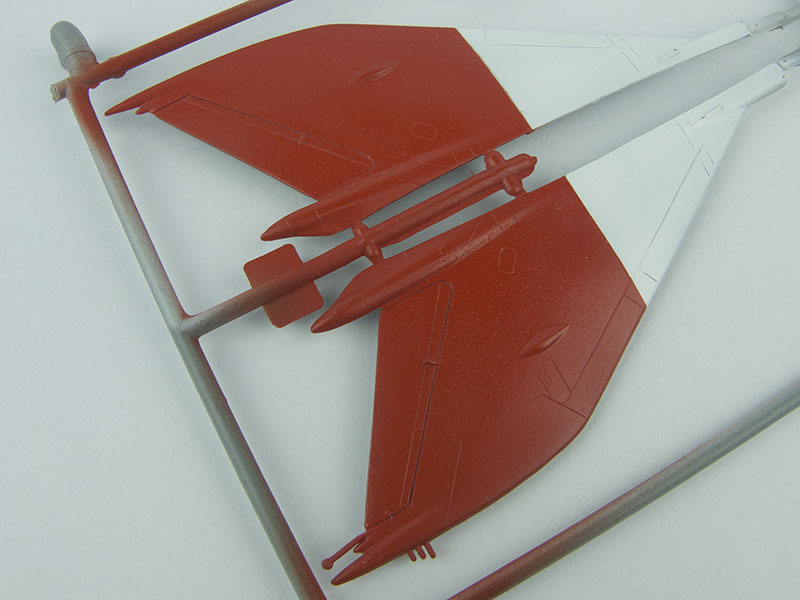 The time between white and red sessions was roughly 30 minutes, and yet, the Tamiya tape I used to mask off the white had no affect at all on the relatively new paint. There was no sign of lifting, peeling, or flaking of the white paint, whether over primer or bare plastic. Adhesion is impressive!

The surface finish, however, is more like what I was expecting from such thick paint: 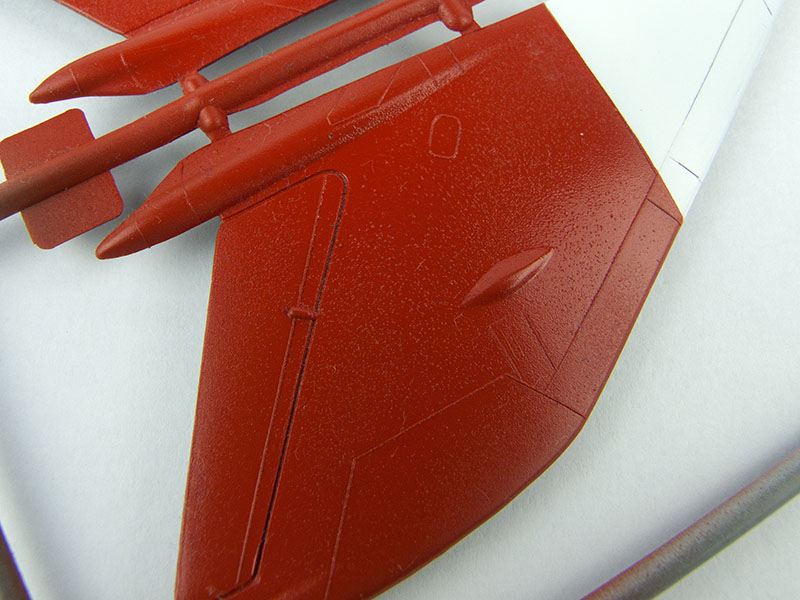 It was clear that the red paint would need thinning before it was capable of producing the expected results through an airbrush, and I was somewhat surprised that it sprayed as easily as it did. So, I gave both fin parts a light polish, thinned the paint to a 50/50 mix with Mr. Color Thinner, and proceeded to cover the white sections with the thinned mix. This time, the results were much closer to what I had been expecting: 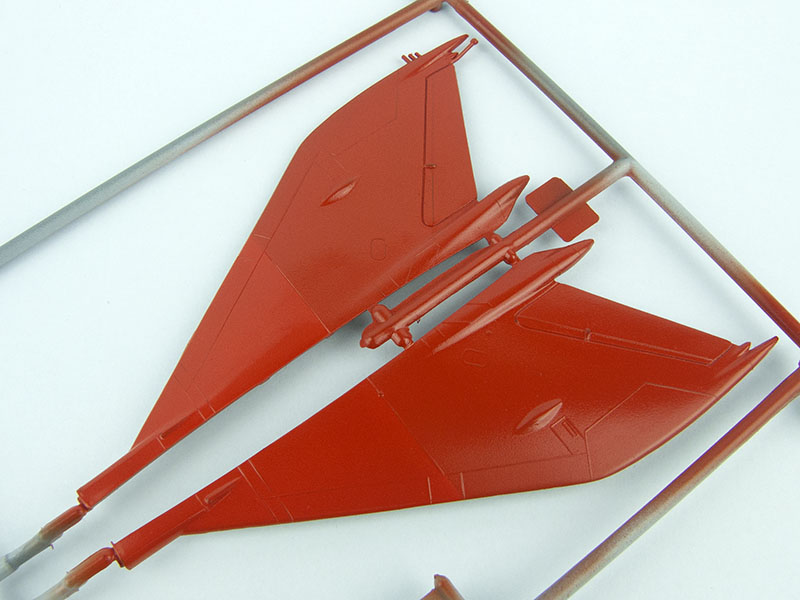 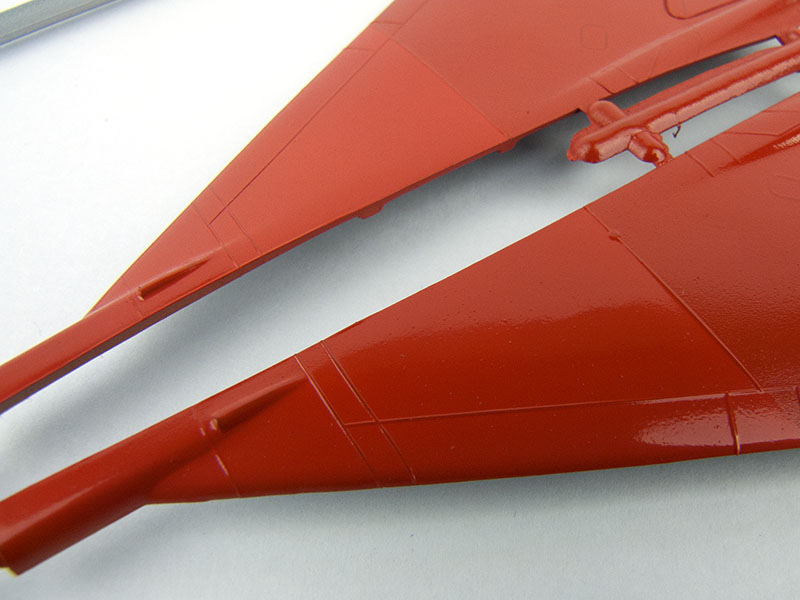 The paint layer itself is glossy, smooth, and rich in colour depth. The small imperfections you can see in the photo are due to inadequate surface preparation on my part, rather than any failure of the paint itself. This time, I was much more impressed, and I feel like the paint was finally living up to the promises Scott had made for it.

So, the secret to success so far has been to ignore the airbrush-ready claims, and thin to a 50/50 mix as you would most other paint brands.

When it came time to test the Flat Clear, I assumed from the outset that it would benefit from thinning, and brewed up my usual 50/50 mix. This seemed to give the requisite milky consistency that is the operational baseline for an airbrushable paint mix. I applied a couple of light coats to one fin half, allowing for a direct A/B comparison: 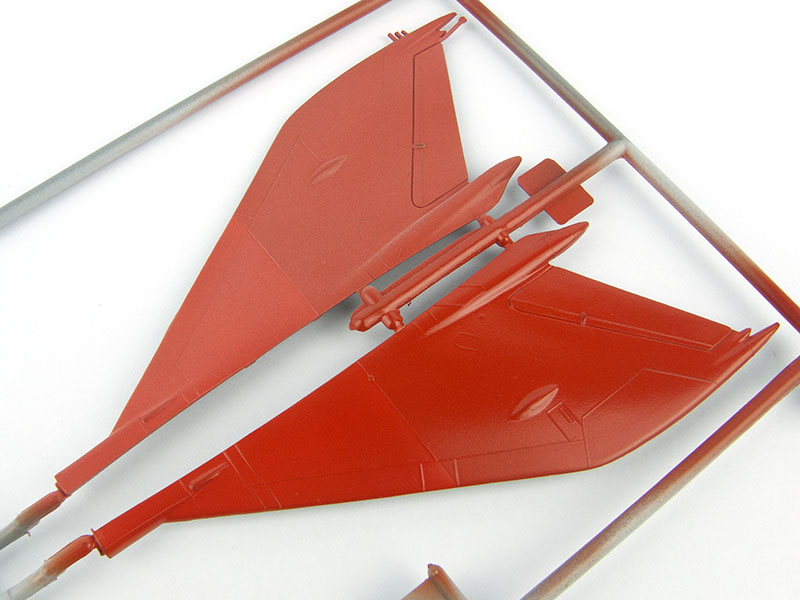 If it isn't clear (ahem), the top fin piece has had the Flat Clear applied, while the bottom piece remains unchanged from previous testing. The effectiveness is remarkable, with a complete change in reflectivity after only a couple of light passes, and the tell-tale lightening of the paint (compared to the glossy finish) is in full evidence. The result is not completely dead flat, but has a slight sheen to suggest volume, which leaves some life in the finish.

Not only that, but the flat coat is smooth, with no signs of the chalkiness or spotting that I've experienced so many times with various clear flat products. This is, already, possibly the best clear flat paint I've used so far, and it's fair to say that my photos don't really do it justice (the slight graininess in the photo is not at all evident to the naked eye). 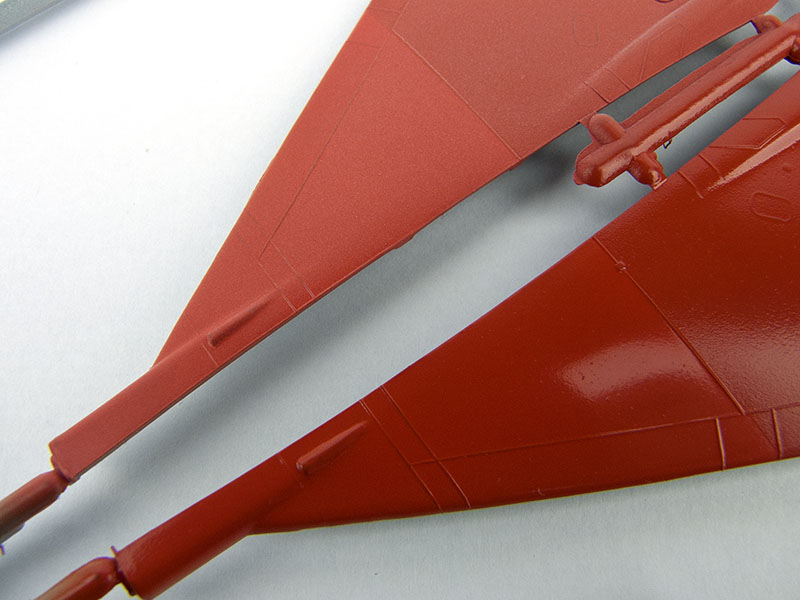 The final product I tested isn't actually paint at all, but an oil-based panel line wash. This means they can be used with impunity over acrylic and lacquer paints. I tested the Grey example, but the range also currently comes in Black and Brown.

Testing a panel line wash is really not a complicated affair: shake the bottle, load up some product on a small brush, and flow it into a panel line. The hallmarks of quality oil-based washes are that they flow well into details over a gloss finish, that there's little-to-no pigment break-up, and that excess wash cleans away quickly and easily.

I used the SMS Grey Panel Line Wash on the engraved rudder line of the MiG-21 fin part that was still glossy, and found all of these things to be true. The result, while not necessarily the best colour choice for this particular example, is exactly what is required, no more, and no less: 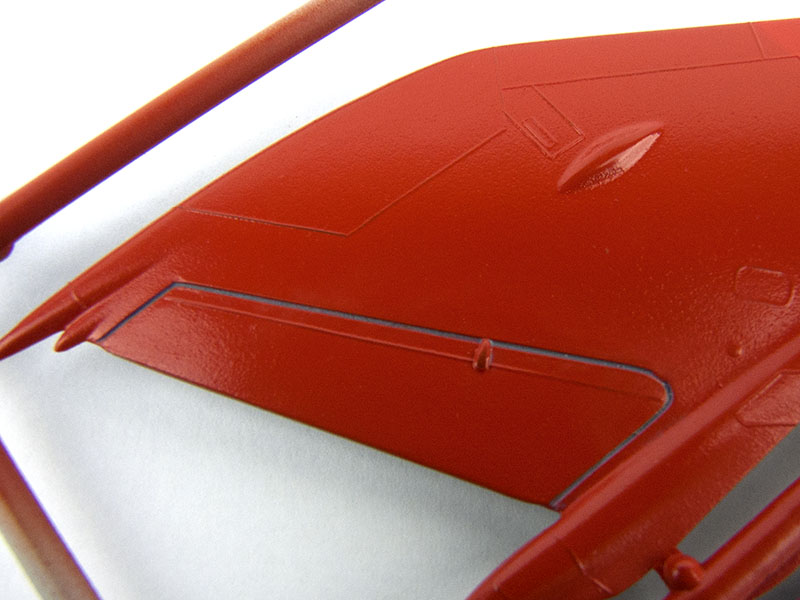 As you can see, the line is consistent in colour density, and the excess has cleaned up without any staining or tide marks. And best of all, no mixing!

Testing got off to a wobbly start before I began thinning the paints prior to use. After that, I can honestly say that I was quite impressed with them. They spray beautifully, with good colour density and excellent coverage. They dry quickly to a robust finish, and seem to resist masking nicely. They're also rather mild-smelling, and lack that pungent, headache-inducing aroma that normally accompanies lacquer-based paints.

My only criticism is the aforementioned discrepancy between being advertised as airbrush-ready, while clearly needing to be thinned for decent results. I spoke briefly with Scott about this, and he mentioned noticing that some colours were slightly thicker than others when bottling, and that he'd follow this up with his manufacturing partners. The SMS range is brand new, only just having recently completed development testing, so there may still be a few wrinkles that need to be ironed out.

That said, when airbrushed at the optimal consistency, there's no doubt that these paints produce superb results.

Being new, the SMS range is currently limited to a small selection of eight primary colours, plus clear flat and gloss. Many more colours are planned, however, including some military colours. Scott is a Gunpla modeller, so I wouldn't expect to see a full set of RLM colours any time soon, but if the range can develop to include a handy selection of colours for aircraft modellers, it could become a compelling alternative to the incumbents for Australian hobbyists. The Mr. Color and Mr. Paint ranges, superb though they are, are notoriously difficult and expensive to obtain here in Australia, so this locally-made alternative could potentially alleviate much of that pain.

For the moment, Scott is making the SMS range available only to the Australian market, partly as a desire to start small, and partly because he's trying to solve a local market need. He did confirm to me in conversation, however, that he does plan to eventually offer the product internationally. A PDF version of the SMS catalogue is available from their website, with new products already announced.

In short, get the consistency right, and these paints are wonderful. If they can sort out the manufacturing inconsistencies involved, and extend the range, I've no doubt this product will be a winner.

Many thanks to Scott Taylor and The Scale Modellers Supply for the review samples.