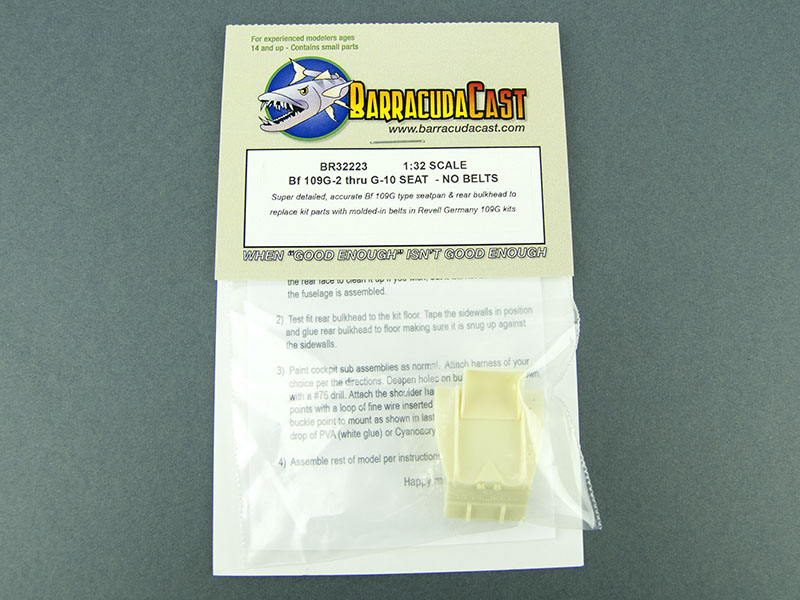 BarracudaCast, out of Roy Sutherland's Barracuda Studios, has just released a selection of resin upgrade items aimed primarily at Revell's new Bf 109G kits. Here we take a look at set BR32223, which the packaging describes like so:

This is a very simple upgrade set, consisting of only a single resin part: 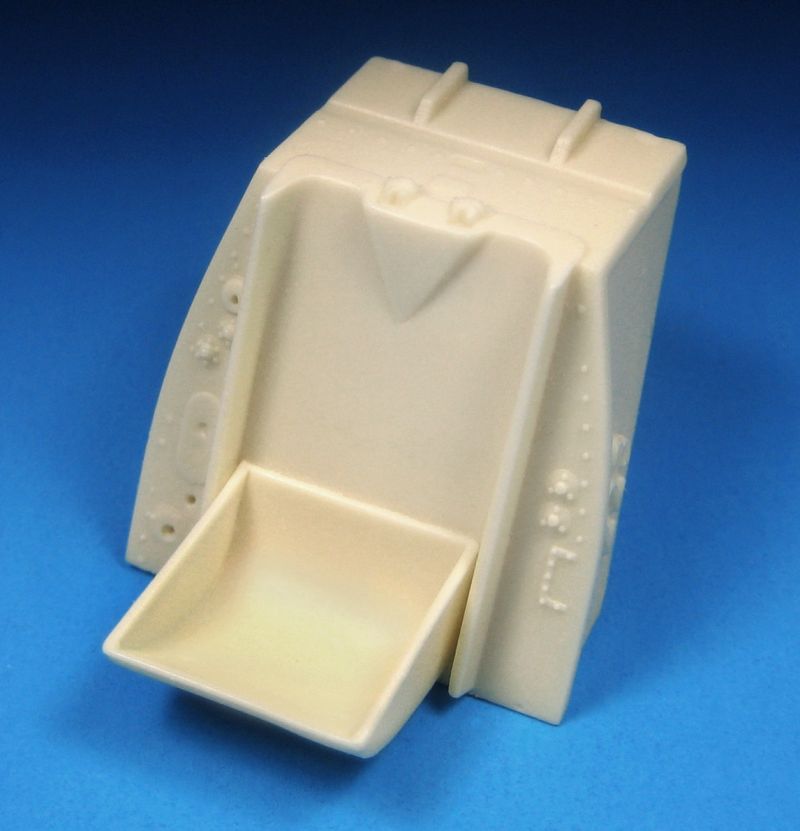 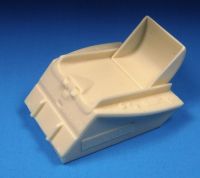 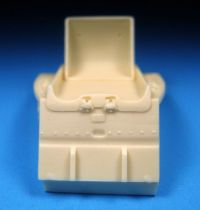 Those of you who are familiar with the target Revell kits will know that the seat comes with some decidedly poor moulded-on seat belts: 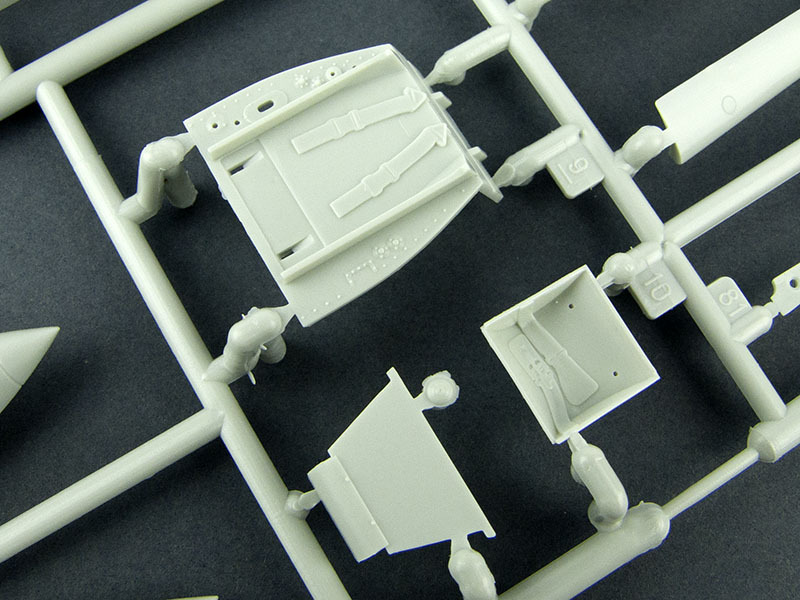 While they can be removed with some effort, this replacement part from Barracuda saves you the trouble, and adds some extra detail, too. The new resin part appears to be based on the kit parts, so I did a quick test-fit against the kit's cockpit floor: 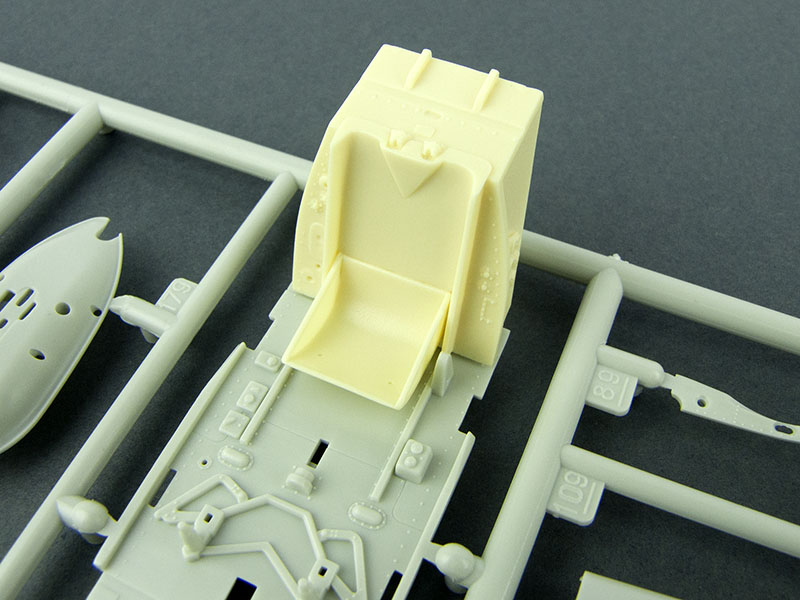 Even though the part is only held in place with some Blu-Tack, you can see that it fits pretty nicely. It lacks the locating rails of the kit bulkhead, but makes up for it with a generous contact area between the two mating surfaces. Some care will need to be taken with alignment, however.

One of the neat things about this particular resin upgrade part is that the substantial pour block behind the part can be happily left in situ; there's no requirement to remove it prior to installation, and if you've worked with resin parts before, you know how fraught this removal process can be! Nice one, Barracuda.

The instructions consist of a small folded sheet, printed in colour, with a brief description of the installation process, and a selection of photos: 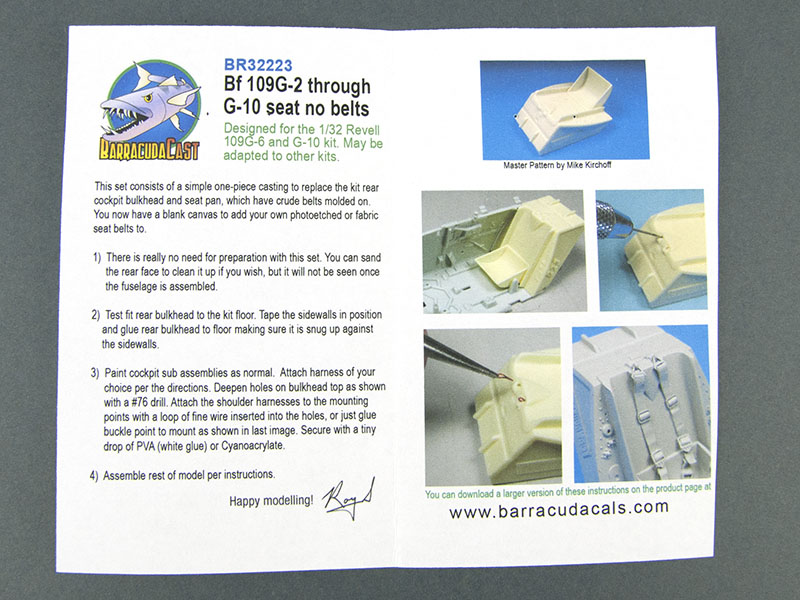 As the instructions note, this set leaves you free to add your own seat belts using your preferred approach. Note that there's an alternative version of this set (BR32224) that includes moulded-in seat belts.

This replacement seat is about as plug-and-play as a resin upgrade set can get. While it offers some minor detail improvements over the original kit parts, its real value lies in the sheer utility and convenience of having those awful moulded-in seat belts dealt with for you. It's a simple upgrade that solves an ugly problem, and as such, is highly recommended!

Thanks to Barracuda Studios for the review sample and product photos.