Let's get started with the ALQ-128 pod. It takes part of the GTR Misc Upgrades for all of the Tamiya Eagle Kits and is always a great contrasting highlight to the overall silhouette of the vertical stabilizers of F-15E. The ALQ-128 pod in the real plane sits majestically on top of the left vertical stabilizer and is considerably bigger, than the pod on the opposite vertical stabilizer. This pod is related to the Electronic Warfare Warning System of F-15E, but on the model it's just a piece of plastic that is cast along with one of the two halves of the stabilizer. Thanks to GTR Products, you get an awesome resin replacement of the ALQ-128 Pod and it really is awesome! It has almost nothing common with the part from the Tamiya kit, even the shape is slightly different, but first take a look at this gorgeous resin part.

It has a slightly longer shape, which is visible with just a blink of the eye. The diameter is a hint bigger, which for such a small part is easily remarkable too. According to a trusted information from GTR, I could say that the pod is as close as possible to the ALQ-128 Pod in the real F-15E. Furthermore, this resin part features so many tiny little upgrades that after a gentle wash and/or dry brushing – it will show the true finish of the detailing of the plane's vertical stabilizer. Just take a look at the layered surfaces in this side-by-side comparison with the original pod from the Tamiya kit. 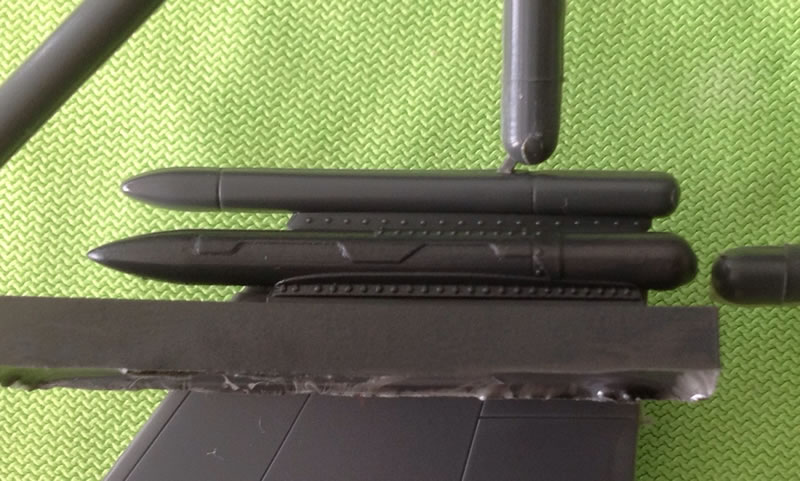 The GTR part is flawlessly corrected in terms of shape and details. The rivets are more pronounced and they are just more. Another great benefit is that the resin part is a separate part, so it offers easier handling and painting, while the kit part is blended with the one half of the vertical stabilizer.

The Wheel/Tire/Dampener Set from GTRP is next in this review. The Tamiya kit parts are a lot, impeccable and very well designed, but the GTR set is even better. This resin set has corrected parts, optional parts, fine detailing, and the parts are numerous. Take a look: 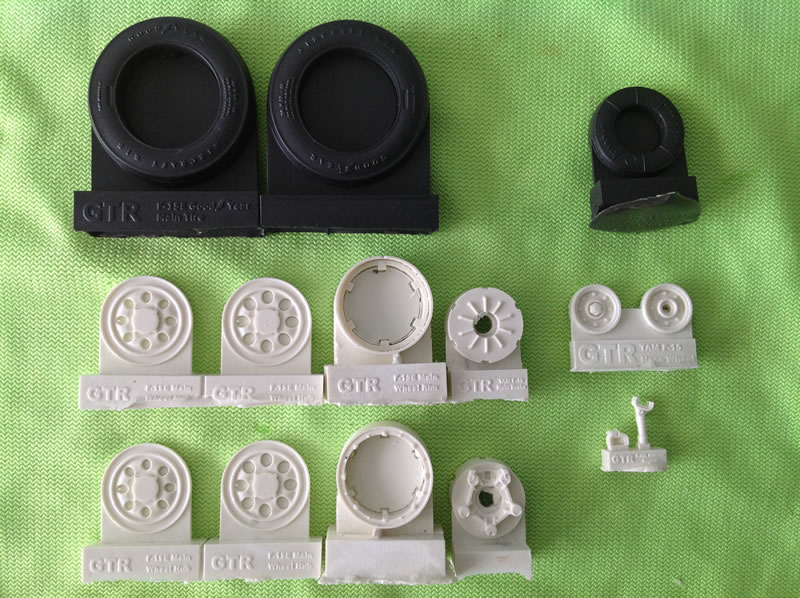 At first glance, these awesome resin parts have a lot of modifications and improvements, but after an in-depth review – they become even more. For example, let's take the branding of the tires for the main landing wheels: they are “Goodyear” tires. This is followed with all the associated differences from the “Michelin Air X” tires, which are the rubber tires in the original Tamiya kit. You may think that these differences are not so important, but for a 1/32 scale model – we talk about visible differences and the following pics give more insight into that. Just a hint: the “Michelin” tires have 4 treads, while the “Goodyear” tires have 3 treads. Another awesome improvement is the difference in the assembly of the wheels. The wheel hub is a separate part. It requires only a gentle sanding to open the cooling holes, which definitely attract a great attention when one just looks at the Striking Eagle's wheels. The mounting on the metal pylons can also be done in a different order, according to your preferences. The color itself of the resin parts gives another awesome advantage – easier painting. The black and white base means that only a thin layer of paint is required, which on the other hand – means a much better exposure of the fine details, and the details are…. A side-by-side review with the original parts from the Tamiya kit follows.

*Note that for the comparison I used the already assembled tires/wheels of my F-15E model. They are after a treatment with sandpapers, Surfacer 1200, paints, a lacquer, pigments and washes.

Stunning lettering and details on the tires themselves – the more and the crisp letters are without a doubt visible at least from the outer side of the tires, and in 1/32 scale they are even more pronounced. The amazing GT Resin tires have the right amount and precision of the letters for the “Goodyear” tires. There is even a clearly distinguishable representation of the “Goodyear” logo. The letters and the details are everywhere, and this is the same for both sides of the tires. 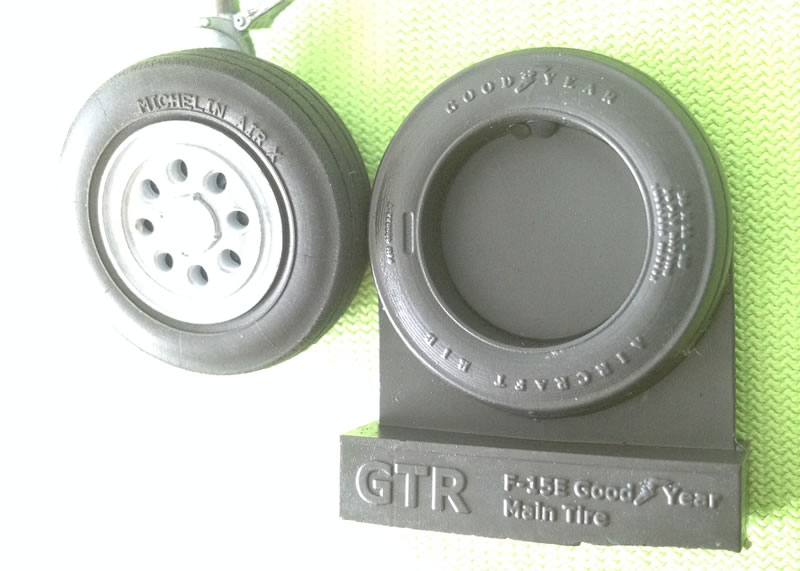 Shimmy Dampener – in my opinion, the Shimmy Dampener makes the most gigantic highlight in this GTR set, although it's the smallest part. Indeed, the Shimmy Dampener is assembled from two small parts. It is an indispensable addition to the F-15E nose wheel and is mounted near the base of the fork, just above the tire. If you plan to use the metal pylon from the Tamiya kit without modifying it – then you get another awesome benefit: the Shimmy Dampener mimics beautifully the larger gap between the top of the tire and the metal fork of the pylon. Another awesome benefit is the detailing and the sharpness of the two tiny little details. Again some fine sanding and work with a very sharp knife is required to clean up and make the parts “transparent”, just like on the real plane. After that – you get a nice beautiful addition to one of the most open and noticeable areas of an F-15E model – the nose wheel. The next photos include a test fit of the Shimmy Dampener to the metal nose wheel pylon. The angle, the size, the details: all is awesome, just perfect.

Different types of wheel hubs, respectively for different versions of the plane and the wheels. The resin set includes hubs with bigger and smaller holes so you can choose a piece according to your own preferences. In all cases – the holes of the hubs have a corrected size and spacing. The center caps are almost the same as the kit parts, but they are part of the hubs themselves, instead of separate center caps as is from the Tamiya kit. This reduces any risk of misaligning the center caps from right where they should be. 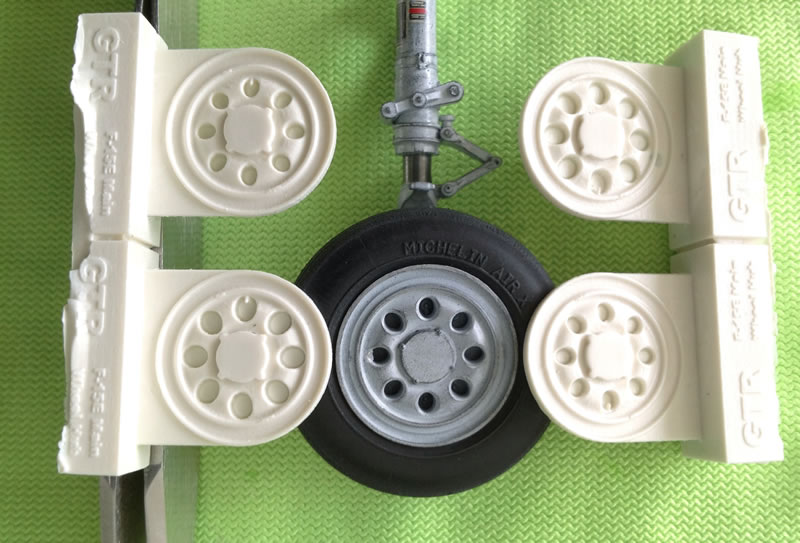 Pump valves, which are almost invisible, but they are there. I tried to scratch build and attach something to imitate these pump valves on the hubs, but it was quite difficult and impossible, and after a couple of tries I decided to leave them without. The awesome GTR wheels sets have the small pump valves blended to the hubs quite precisely. They should look very intriguing with their contrasting yellowish color onto the white wheels. 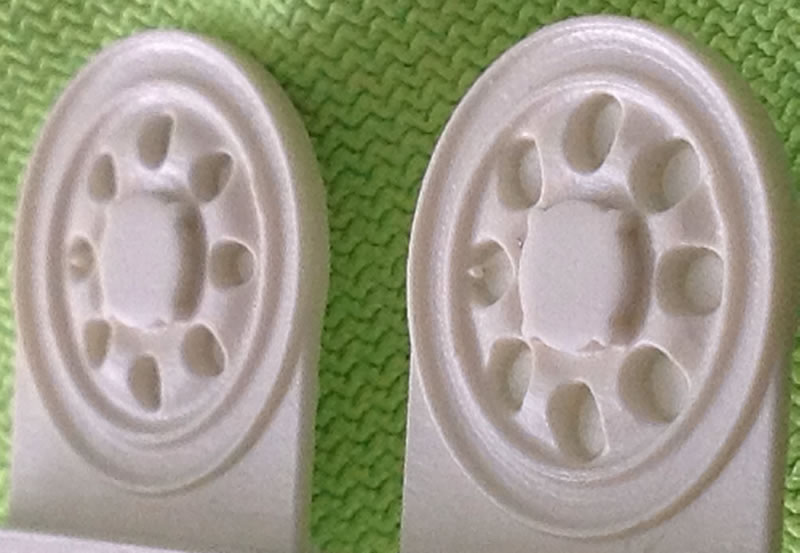 Corrected cross-section and profile of the tires. Beside from the most visible difference – the different number of the treads and the countless letters, the tires have another difference, which is a less visible difference, but it definitely is a very pleasant difference. It comes to the corrected dimensions of the tires, which you can barely see at the following side-by-side close-ups with the original rubber tires from the Tamiya kit. The front wheel is just about the same as the rubber part in terms of dimensions, but the lettering is much finer than the Tamiya's front tire. In fact, the front tire from the Tamiya kit has no letters at all. After a quick sanding and cleanup – the GT Resin tires will become a truly awesome addition to the landing gears of F-15E. Remember that the pylons of the main landing gears in this specific aircraft are almost completely concealed by the conformal tanks and the CFT weapon pylons, especially when the model is displayed with a lot of armament, so the tires and the wheels become the only easily visible parts from the main landing gears.

Details from the inner sides of the wheels. The break pack consists of two parts and each is dotted by a good amount of details. The antilock sensor marks, the textures, the long rays from the opposite side that are visible through the holes on the hubs – these parts definitely have some improved details when compared to the kit parts.

The upgraded GTR parts are awesome and provide a huge improvement for some of the most visible areas in a modern jet – the landing wheels. The ALQ-128 pod is also an amazing addition – it is just one resin piece, and it is a piece of art. The entire wheel/tire/dampener set features a great amount of high-quality resin parts and according to my previous experience with GTR products – the fit of all the parts should be impeccable. If you think that the assembly looks difficult from the way they look like on the photos – then consider first reading the installation manual. It is another one of all the awesome surprises in the GTR Wheel/Tire/Dampener Set and sometimes it can save the situation. It is just one page with the basic installation instructions, as well as suggests very useful tips and tricks on how to deal with the tricky parts of the assembly.