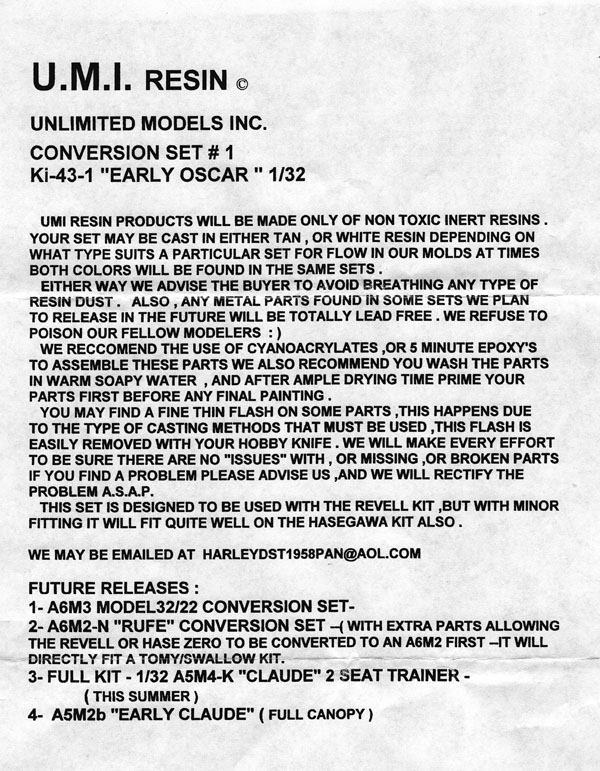 The late Dave Thompson liked to create resin conversion sets and full kits to expand the variety in the neglected niche of Japanese of WWII. The first releases were under his Planes with Pants banner, then later under the name of U.M.I. Resin. The Ki-43-I conversion set for the ’70s Hasegawa or Revell kits was the first release. 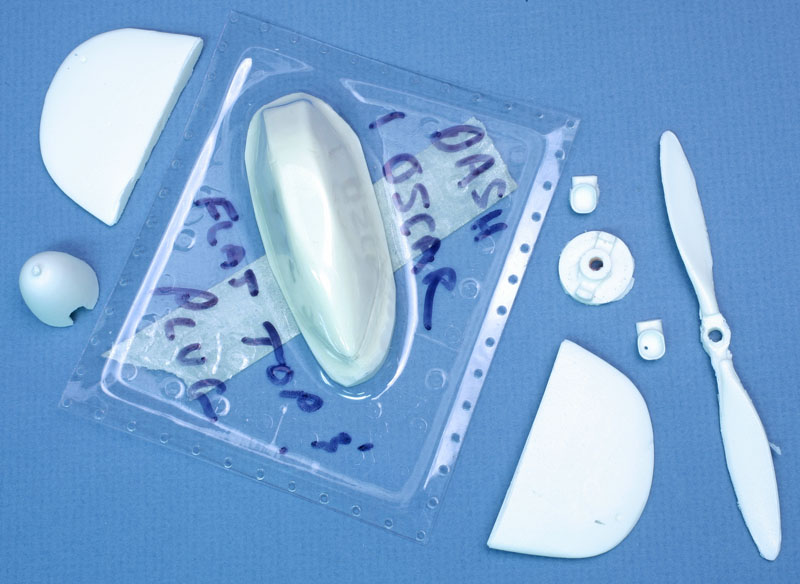 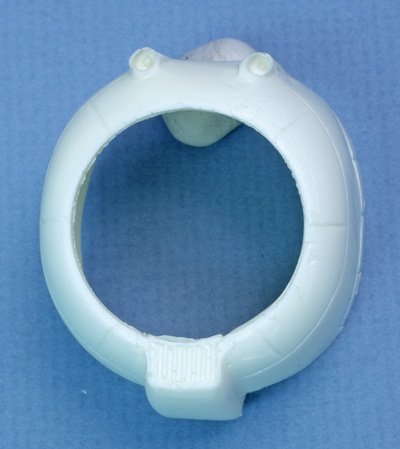 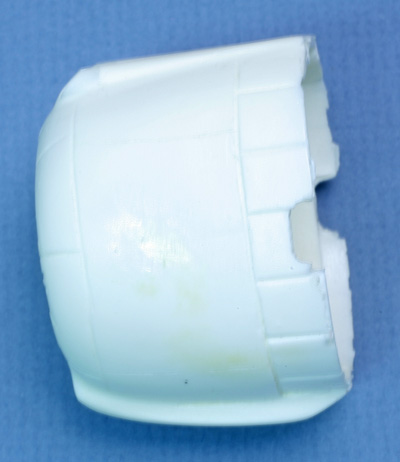 The conversion set includes a pair of new wingtips to extend the wingspan, a new vac “flat top” canopy, a new two-bladed prop and spinner, a pair of exhausts, and a new cowl. 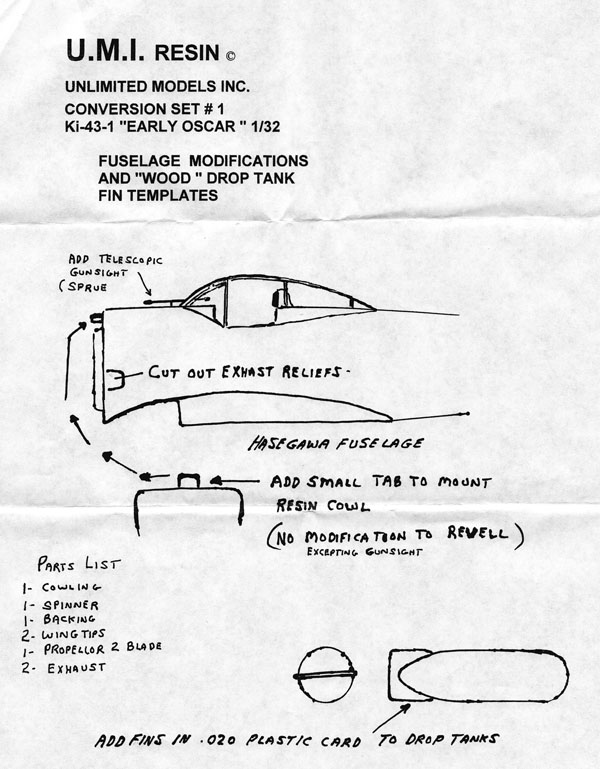 Along with these parts, instructions are given in a three-page instruction booklet, including drawings to help convert the Revell or Hasegawa kits. As well as showing how to modify your choice of kit with the parts, it gives instruction on scratching a new pitot tube, telescopic sight, and fin for the drop tanks. No decals are provided.

The parts are cast in a somewhat brittle white resin. As a low-tech, garage producer, these are definitely old-school castings with quite a few bubbles to deal with and various flaws, like uneven scribed lines. That is not to say the parts are not useable, it is just going to take a little more work to clean them up. 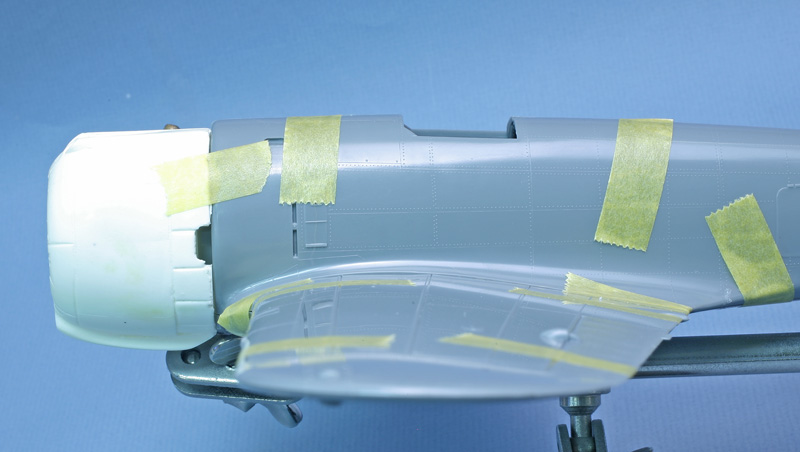 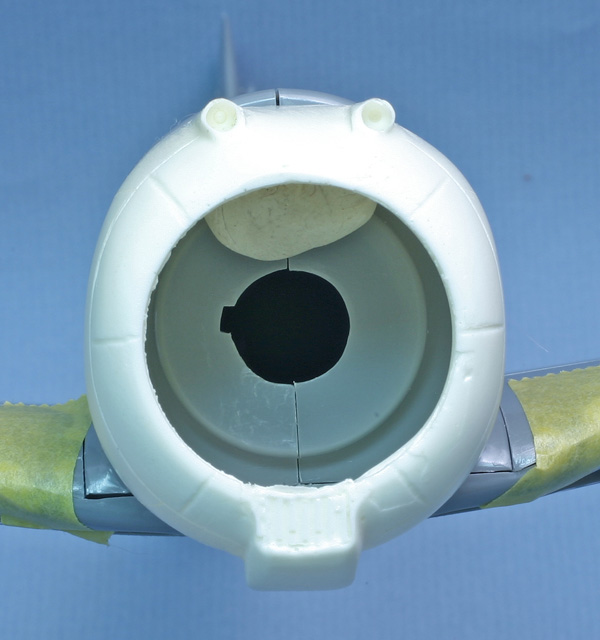 Looking at the accuracy of the parts, I found some issues. The cowl appears pretty accurate in size and matches up to the Hasegawa fuselage pretty well. One thing that stands out, though, is how it is quite flat on top which is obvious when viewed from the front of the Hasegawa kit (I do not have a Revell kit to check out). From examination of photos in the references listed below, the cowl should be rounded across the top to better match the curvature of the fuselage behind. The cowl is also missing scribing for the two cowl flaps that go across the top between the MG tubes.

The vac canopy also has a few problems. For one, there isn’t any frame detail in the canopy; the modeler would have to add that himself. Also, the shape appears off a bit. The forward half of the sliding canopy appears to be mostly made of flat panes of glazing with a slightly domed rectangular glazing top. The vac provided appears to curve to the center at the front and back.

The wingtips extend the wings the required amount, but there is no detail on them other than a pair of holes to locate the wingtip lights. They do not have any representation of the extended ailerons. Also the shape appears a bit off. They look similar in plan shape to the -II wingtips with an insert added. The -I tips should be more rounded in plan.

Other parts include exhausts and prop. The exhausts look like a copy of the Hasegawa parts; maybe for converting the Revell kit? The prop looks pretty good in shape when compared to photos, however I think Dave took the props from one of the kits three-bladed ones and re-made them to a two-blade configuration. Unfortunately, the -I prop should be 100mm longer in diameter so the conversion parts are about 4.5-5mm short.

Parts missing to complete the conversion include the gunsight and pitot tube mentioned in the instructions, but also modifications needed to the horizontal stabilizer and elevators, rear canopy internal support structure, modified instrument panel, and some bulges needed on the forward fuselage that coincide with the different cowl. A prominent feature of the -I, that circular oil cooler in front of the engine, is also not provided but the Hasegawa kit actually provides a decent, if simplified, three-ring oil cooler in the kit. This provided cooler actually is incorrect for a -II; it should have five rings instead of three.

In conclusion, this conversion set goes a long way to making the conversion to the Ki-43-I and a nice model can be the result with some work. Unfortunately, with Dave’s passing this set is now long out of production. I do not know how many he made, but you may be able to find one on eBay or from a fellow LSP’er. Stay tuned, however, as there may be a new set in the works!