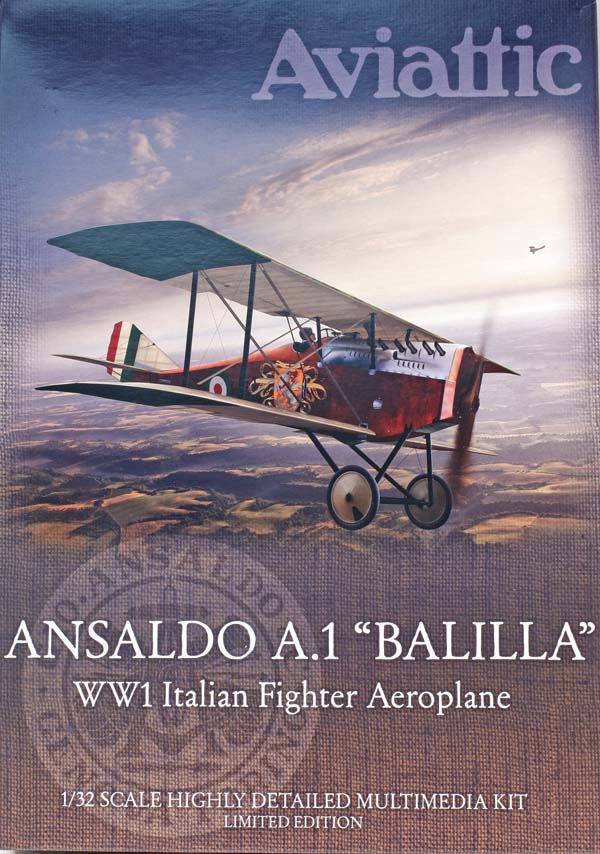 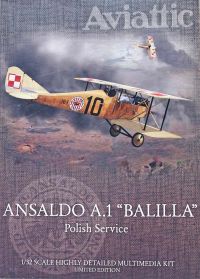 Note: This article is revised to reflect the production version of the release.

This is a review of Aviattic’s recently released Ansaldo A.1 “Balilla” kit. This is Aviattic's first full aircraft model release, and it is something to behold! Opening the box, it is obvious many, many hours went into this kit. It will take a lot of patient work to put this together, but will be something to be proud of once completed. 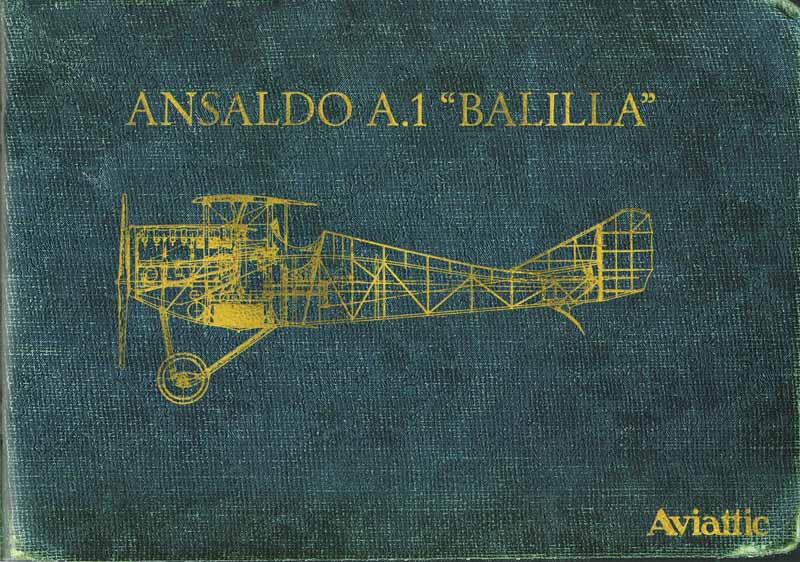 Paraphrased from the history in the supplied refence book included with the model: The Ansaldo A.1, nicknamed “Balilla,” was a late war Italian design developed from the SVA series of aircraft. It had the same SPA 6A engine and a similar wasp-waisted fuselage. The unusual fuselage was an Ansaldo trademark, likely rooted in Venetian boat-building practice. Improvements over the SVA included conventional wing struts and two Vickers machine guns within easy reach of the pilot.

The prototype first flew in the Spring of 1917 and additional development continued into December. Italy’s top fighter pilots weren’t impressed, noting the SPAD VII was more maneuverable. More tweaking of wing shape, engine and gun positioning finally led to the type’s approval, though it wasn’t until the Summer of 1918 that one hundred examples reached fighter units and training schools.

To promote the new fighter, Ansaldo presented aircraft to two famous pilots, Natale Palli and Antonio Locatelli, which were spectacularly marked with hand-painted St. George crests of the city of Genoa laid on gold leaf shield panels. (Note: these schemes are included in the kit!) The only WWI victory recorded with the type was on Oct. 8 by Tenente Eleuteri of 70 Squadriglia over possibly a OEF Albatros DIII. The aircraft was successful, though, as a robust, fast and agile recon scout patrolling during the final months of WWI.

After the war is when the aircraft saw much of its service, being exported to many countries, including thirty-five aircraft making their way to Poland. There, they saw extensive use with the Kosciuszko squadron in the Polish-Russian war of 1919-1921. In that conflict, unlike the Italian pilots, many American volunteer pilots had nothing but praise for the aircraft. It was very effective for patrolling and attacking Bolshevik forces on the ground. Poland also obtained a license from Ansaldo to build additional machines at a factory in Lubin; these aircraft eventually replacing the tired Italian aircraft and staying in service long into the 1920s. 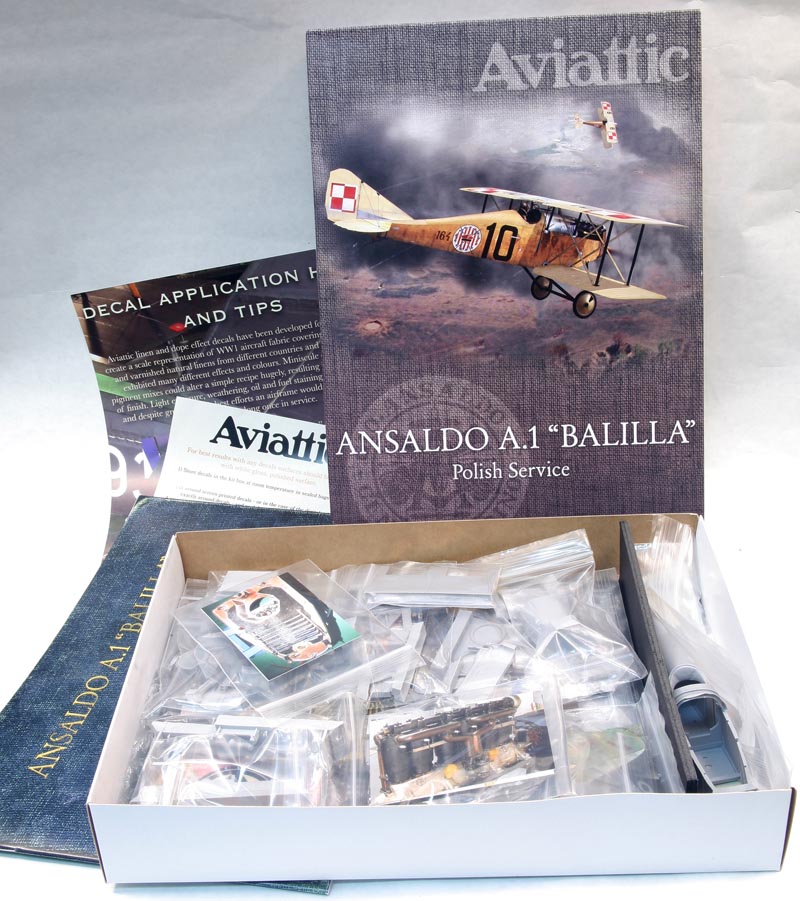 This kit is presented in a very professional manner, almost if not equal to Wingnut Wings in its quality. Provided in a very nice box equal to most injection-molded kits with very nicely done boxart on its top and sides. Inside the box one finds a twenty-eight (including cover) page reference booklet printed on quality paper. It includes black and white period photos, parts of technical drawings, and color walkaround photos of museum aircraft and parts and artwork. Most resin parts are placed in small Ziploc bags, typically grouped by build steps, with many including small business card sized reference photos of the corresponding parts. Wings and flying surfaces are taped to a foam-core sheet to keep them flat and protected. The small sheet is bent on one end to create a protective space for the two main fuselage parts which are taped together. Frameable four view color artwork of a couple of the decal options is printed on card stock and included. Those who made early pre-orders were dropped into a hat and a lucky few got a bonus of a nicely carved, laminated wood propeller. A signed certificate of thanks is also included for being one of the first two hundred pre-orders. 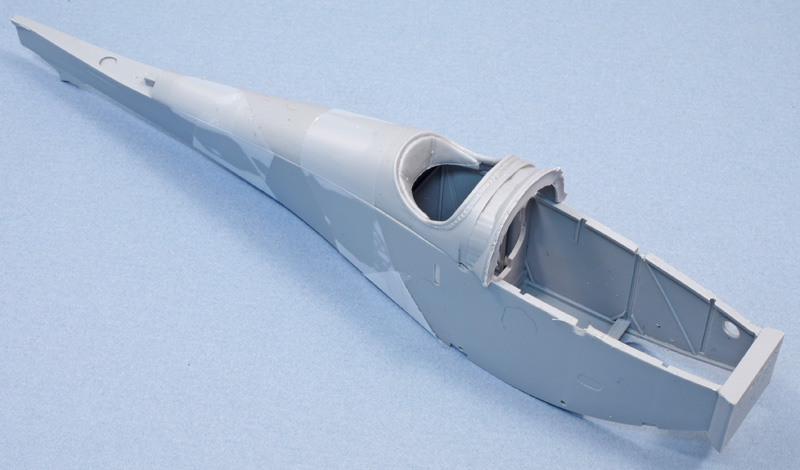 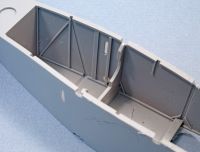 The resin parts are beautifully cast, and there are a lot of them! A total of 179 to be exact. I could find no bubbles on any parts, and only one small sparkplug is missing an end. This could be my fault: after removing all packing peanuts from the box and carrying it over to where my photography set up is I managed to fumble the box and drop it to the floor! 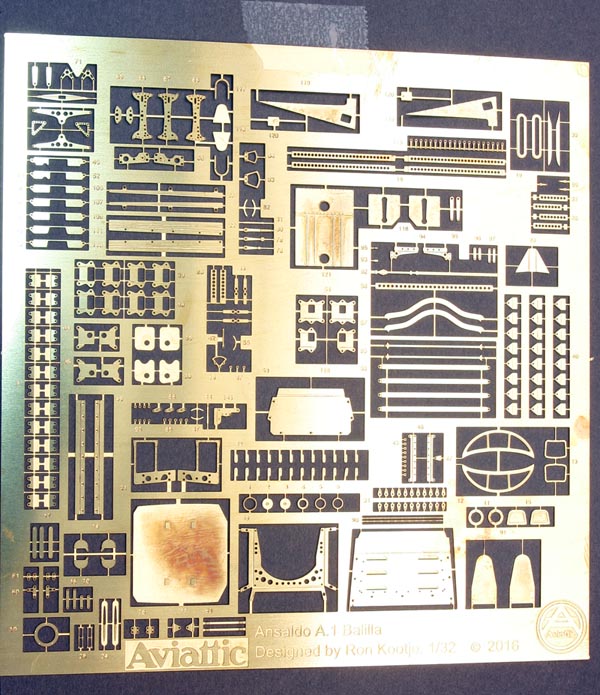 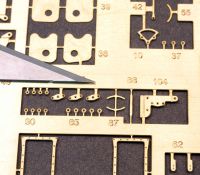 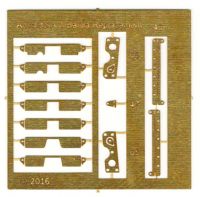 Just as impressive is the large, 5-1/2” x 5-1/4”, brass PE sheet, plus a smaller nickel steel PE sheet containing spokes for the wheels. These sheets add about another 300 parts to the kit. A set of fabric belts and PE buckles from RB Productions is also included; a white metal tail skid and a length for spark plug wire complete the package. The final production version also includes a small additional fret with a dozen additional parts with corrections or to cover some small omissions. 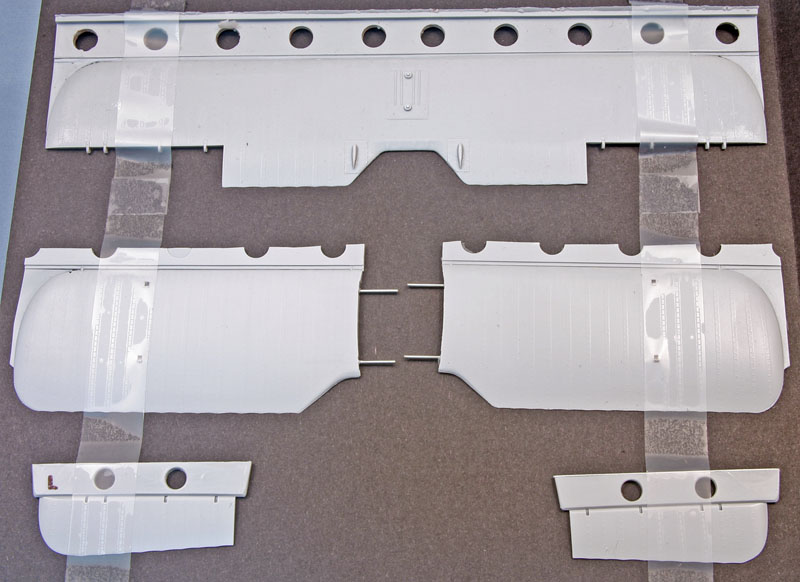 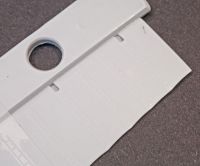 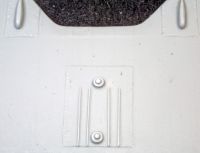 The fuselage is in two parts; a large tub part and a separate decking. Interior framing is neatly cast into the tub.The wings are cast as three solid parts, with nice detail for the radiator in the upper wing, and very subtle, accurate, representations of wing rib strips. All flying surfaces are separate parts. The tailplane part includes a small portion of the upper end of the fuselage, vertical and horizontal stabilizers. Again, all flying surfaces are separate. 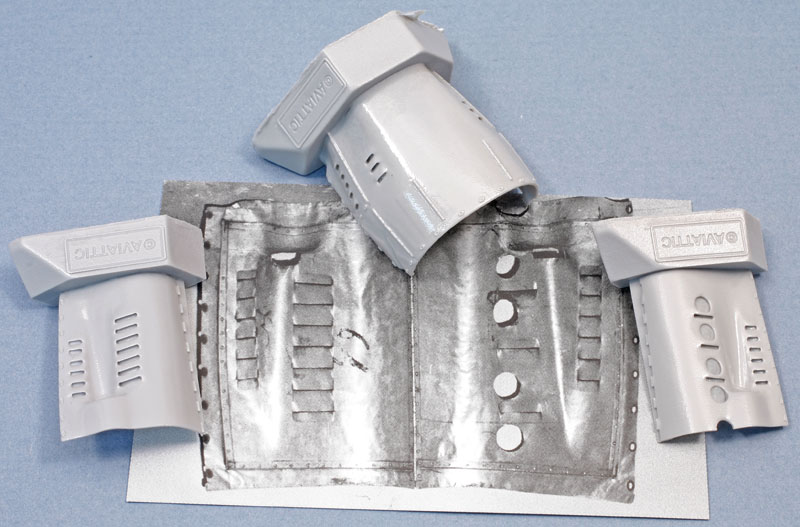 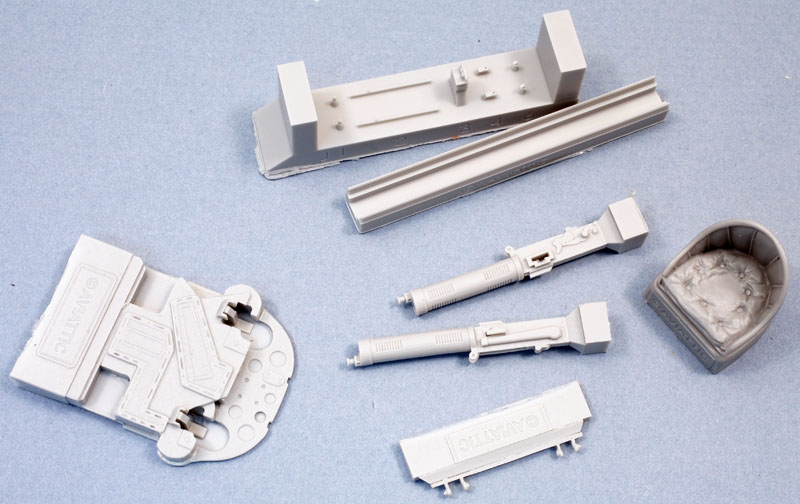 The cowling panels are separate parts, cast in thin resin. The modeler is directed to sand off the thin raised areas inside them which will open the finely cast cooling vents. Machine guns and ammo chutes are also included, as well as interior bracing. 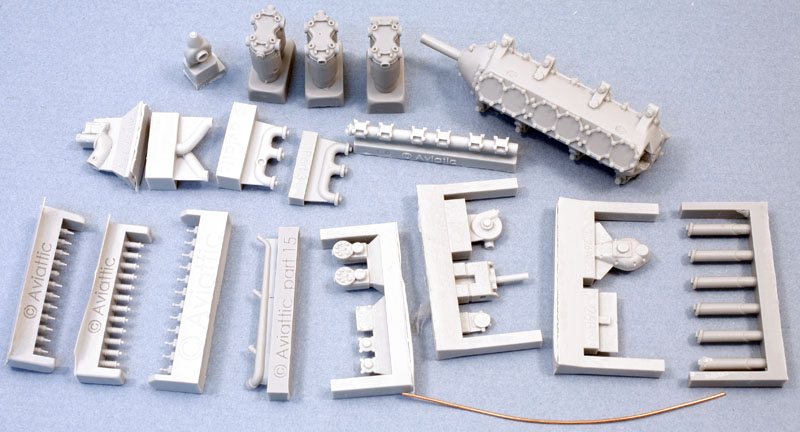 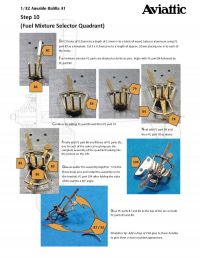 The engine is a model in itself. It includes sixty-three resin parts, a length of wire, and many PE bits.

The cockpit is also exquisitely detailed. The throttle quadrant alone comprises twelve PE parts. Plan on spending a few hours on this area, not to mention the required detail painting. Those who choose the presentation aircraft will be challenged with the special white and blue painted cockpits.

There are two options for the wheels. You can display them with covers or use the stainless steel PE provided to recreate wire spokes. Struts all have wire cores to help with strength and fitting. 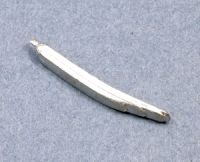 As you can see from pictures of the rest of the parts, there is detail galore, all beautifully cast and some of it very small. Take care when cutting these parts off the casting blocks; there are no spares! And plan on using your Optivisors. 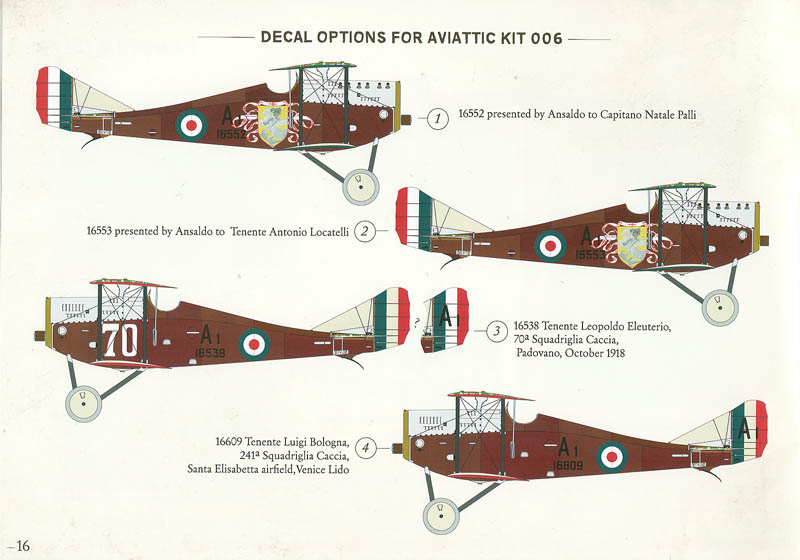 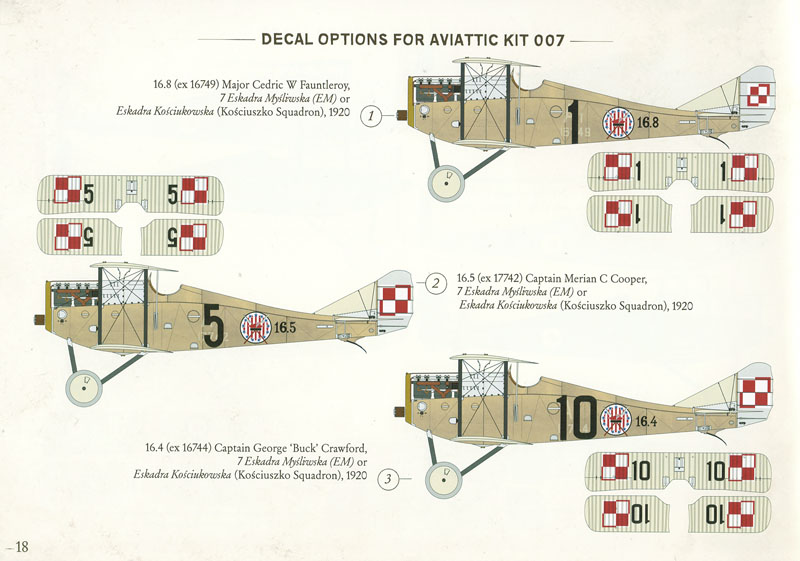 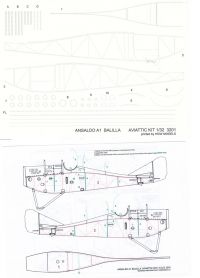 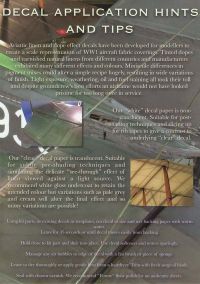 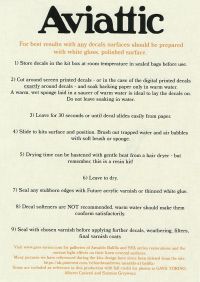 Decals for the two kits are extensive! The individual aircraft markings have been designed by Phoen Decals. They include six markings for Italian aircraft including the two presentation aircraft, plus the aircraft flown in the US by Eddie Rickenbacker for kit #32006, the Italian version. The Polish version gets six aircraft in Polish markings, plus one in Mexican Air Force markings. The Polish version of the kit, #32007, also includes a reproduction of a letter from an American pilot to the Polish government volunteering their service in the Polish-Russian conflict.

Additionally, decals are provided for walnut wood-grain of the fuselage exterior: dark walnut for the Italian machines in #32006, and a lighter, faded walnut for the Polish aircraft of #32007. The Italian kit also gets a set for the distinctive hand-painted camouflage some aircraft carried on the upper wings. Clear doped linen decals are provided for the lower surfaces (both surfaces for the Polish aircraft), and a set of HGW nail-head decals as well as Aviattic instrument decals to complete the package. A very complete set! The St. George artwork is provided as a separate set of decals, with duplicates just in case, to lay over the golden shield decals. It is exquisite! The only decal I am not sure of is the squares of white and red decal provided in the post-war version. Haven't figured out where they go as they are not mentioned in the instructions or artwork, but it might become apparent during construction. 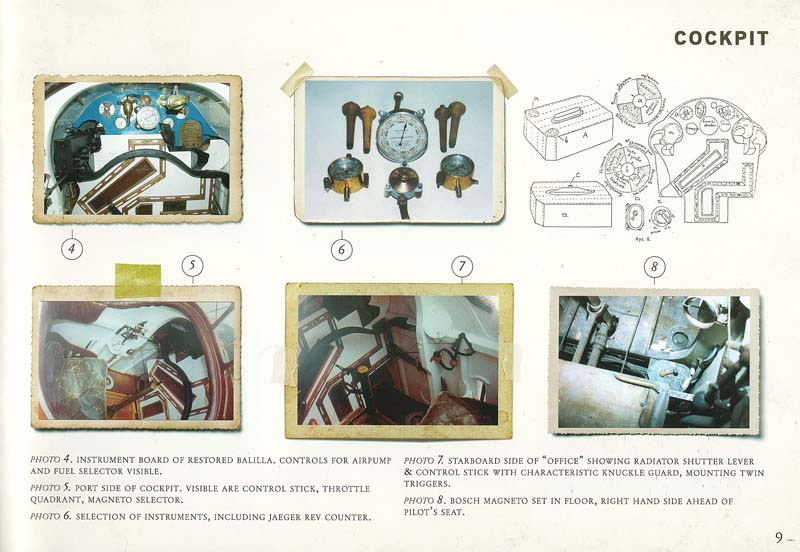 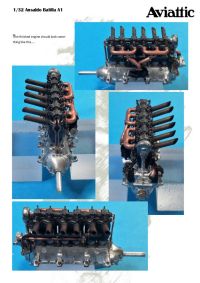 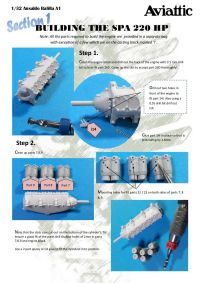 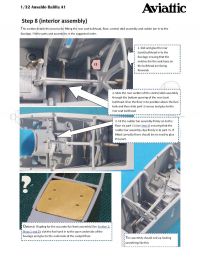 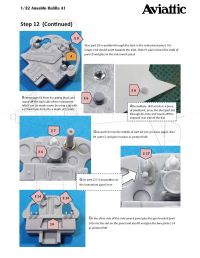 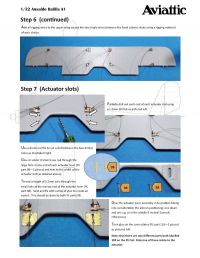 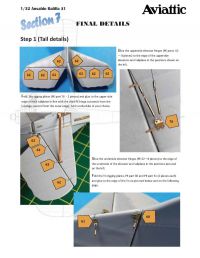 Instructions, with color photos, are provided as a PDF download. It is 74 pages in length and gives a complete build log. I have only included a few sample sheets as 74 is a lot of instructions to post!. If you want to take a look, you can find the PDF log here. Also, take a look at Eric Galliers' build here on LSP.

It is obvious this kit was a labor of love. Comparing the shapes and details to the photos in the booklet, it looks very accurate. I would say it is one of the most complete, detailed resin kits I have ever seen. If you have any interest at all in WWI or between the wars aircraft, you should order this kit while you have the chance.