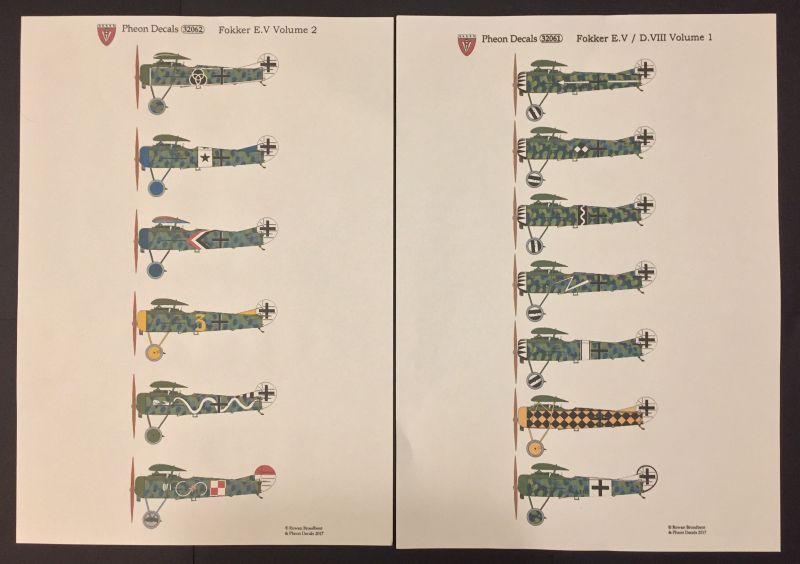 Early in 2017, Mikro Mir reissued the roughly decade-old Avis kit of the Fokker E.V / D.VIII in 1/32 scale. For fans of the "Flying Razor", this was great news given that the Avis kit was starting to sell for as high as $200 on eBay. The primary downfall of the reissued kit was not just the selection of decals in the kit, but also the qualify of the decals as well - the kit decals themselves appearing to be extremely brittle.

To complement Aviattic's newly-released "cookie cutter" lozenge and wood decals to cover the entire fuselage and visible sections of the interior, Pheon Decals has also just released two sets of decals covering a total of thirteen airframes in German and Polish markings. Not knowing what aircraft I wanted to model, I bought both of the new Pheon decal sets in the preorder and they have just landed on my doorstep.

Much to my surprise and delight, both of these decal sets include templates and placement guides to make jigs from card or plastic that will greatly simplify attaching the wings and landing gear to the fuselage with everything pretty well aligned. This inclusion will be a huge help, as the kit wing and gear struts are very thin and the attachment points are not well defined. The jig templates are printed on adhesive-backed paper that can be stuck onto sheet plastic for correctly cutting the jig parts. Sheets are also included to help you correctly place the jigs for assembly. It's rather brilliant in its simplicity, really. 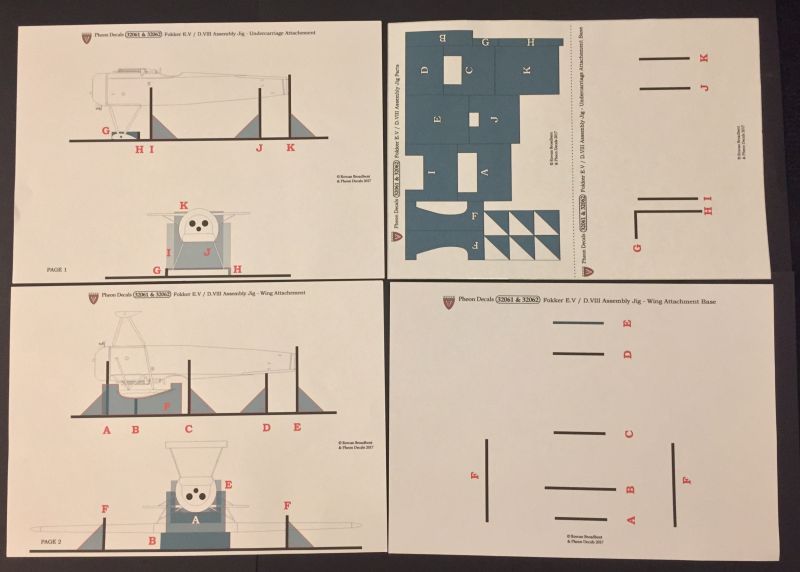 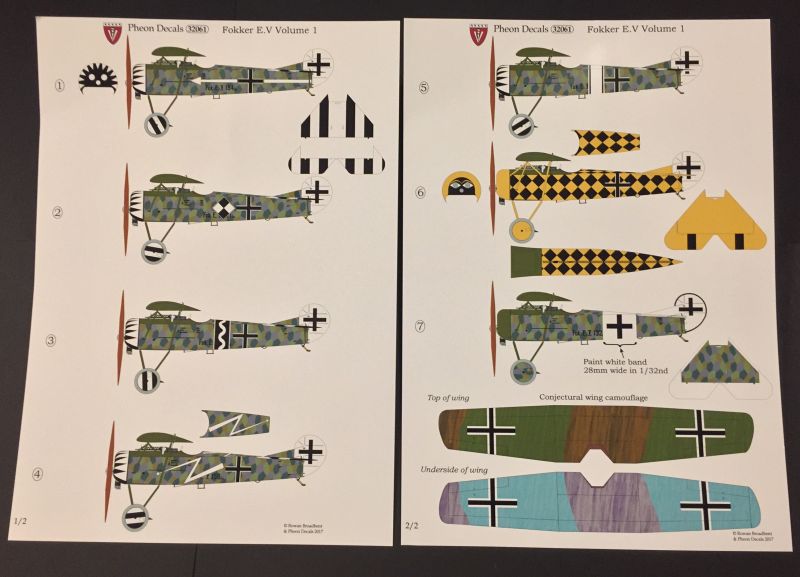 Decals for seven aircraft are included in Volume 1 - five from Jasta 6, one from Marine Feldjagdstaffel Nr.1, and one in Canadian post-war custody, from an unknown squadron. They are:

The decals are printed by Fantasy Printshop and come on three sheets. Two simply in black, and one decal sheet containing markings that have white and/or colour. If the builder is able to source additional wing crosses or is comfortable masking and painting them, multiple aircraft can easily be completed from this set. Interestingly there are two complete sets of Jasta 6 striped tailplane and wheel decals, and four copies of the black engine cowl petals. For builders like me, it's going to be hard to choose just one plane to build but I suspect many may be drawn to Sachsenberg's yellow and black checkered aircraft.

Standard for Pheon, a booklet of color and marking notes on the aircraft (both general notes and those specific to the aircraft included in the decals) is included along with full-color profiles printed on what feels like photo paper. The wing color debate is mentioned and the 4-color streaked varnish is suggested as the wing finish, but as there is no definitive information on how the wings were finished, it's up to the builder's discretion in the end. 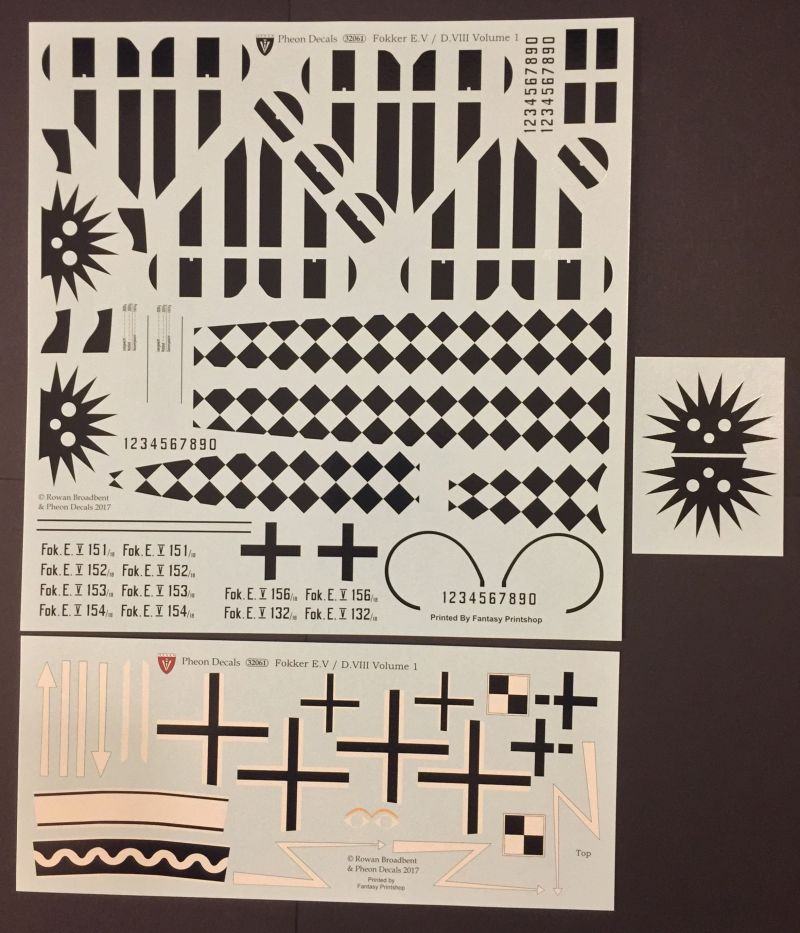 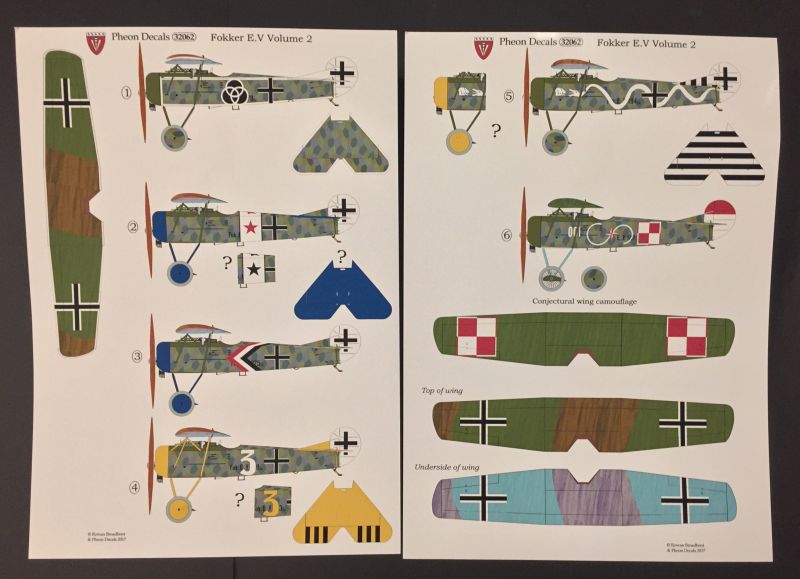 The second volume of Fok. E.V decals covers six aircraft from several Jastas and one serving with the Polish Air Force in 1919:

Volume 2 also includes three decal sheets appearing much more colorful than the first set of decal sheets - quite possibly due entirely to the full set of Polish insignia. White stripes are included on the decal sheet to complete the fuselage outline on Altemeir's aircraft, but the builder will need to mask and paint the stripes on all except the tips of the wings. This should only take a few minutes to complete with 2mm masking tape, so it shouldn't be a problem.

I really appreciate Pheon giving the builder multiple decals for certain markings, as well as clearly showing the possible alternate paint colors for aircraft when the correct ones are not certain. There are three instances of this in Volume 2, allowing the builder to use their best judgement of the photos in question or simply select which option is more attractive. Like with Volume 1, full-color profiles on photo paper (?) and a booklet of assembly, color, and marking notes are included with the set. 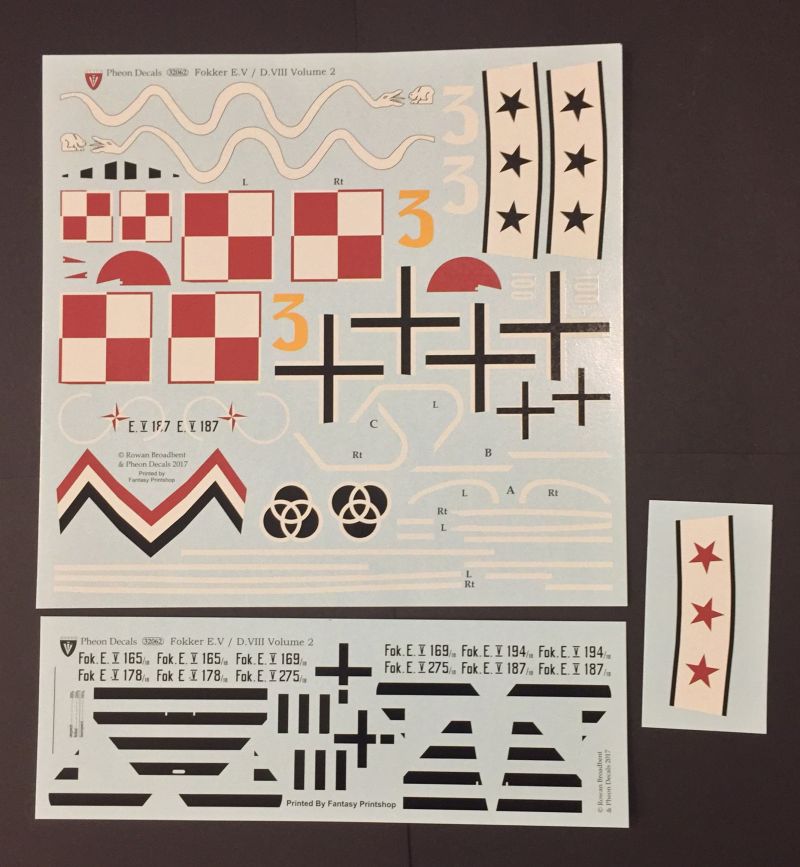 The artwork in both sets is sharp and perfectly in register - not a single complaint or head-scratcher with any part of them. For builders with one or more Avis and Mikro Mir Fokker E.V / D.VIII kits in their stash, these decal collections are pretty much essential both for the physical quality of the product, and the variety of marking options given. The included templates for the assembly jig will help modelers of all skill levels to produce a well-aligned build with relative ease. Both decal sheets are available directly from Pheon Decals, Volume 1 for GBP 11.75 and Volume 2 for GPB 14.25.

Review copies are courtesy of my wallet, both very highly recommended.