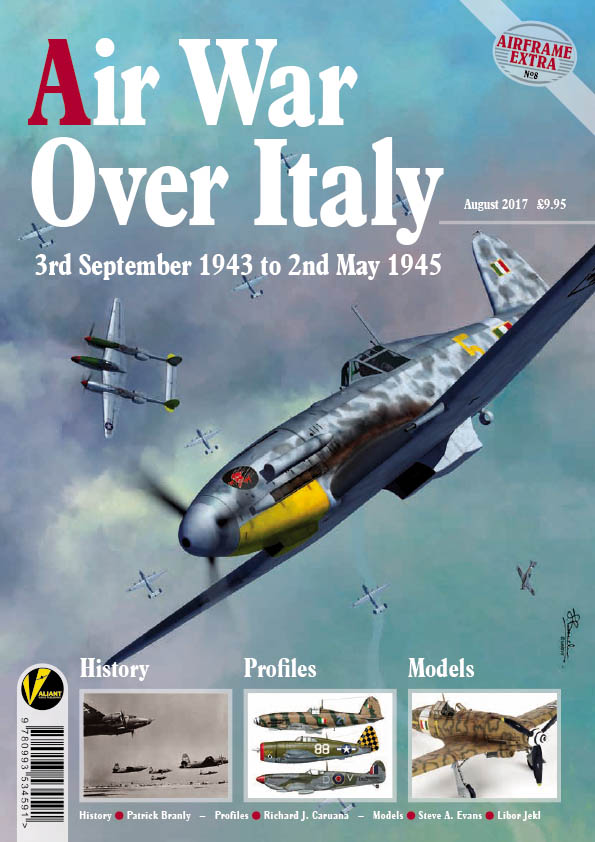 This 17-page section is written by Patrick Branly, and covers the background and conduct of the invasion of Italy and subsequent Italian campaign, with a particular focus on the air war. The format follows a basic chronological description of events, with context given where appropriate. It includes a smattering of interesting period photographs, and represents a handy primer for the events of the conflict itself, as well as being a good starting point for further historical research.

As with all the profiles in the book, this section is illustrated by Richard Caruana, and features eight pages of colour profiles with captioned colour notes. There are plenty of colourful Spitfires, Mustangs, and Thunderbolts on offer, along with a selection of twin-engined types (B-26, Beaufighter, Hudson) and heavy bombers (B-17, B-24). There's even a pair of amphibious aircraft (Walrus, Sunderland) represented. So, no shortage of interesting schemes to choose from.

The first of the title's six model builds features Libor Jekl's build of the Special Hobby 1/72 Martin Baltimore Mk V kit. Like all the builds in this book, it's a typical magazine-style photo-essay of the build, covering eight pages of hints, tips, and advice. Jekl is an absolute wizard in this scale, and his expert handiwork has delivered a build so exquisite that it truly belies its tiny scale. Libor Jekl's builds for Valiant Wings publications have single-handedly persuaded me that 1/72 models can in fact appear as convincing as those in larger scales. Bravo!

Libor Jekl returns with the book's second build, featuring Eduard's 1/72 Spitfire Mk IXC kit. The style of this seven-page build is similar to the preceding one, as is the result!

Libor Jekl makes it three in a row with his build of the Special Hobby 1/72 Fiat G.55 kit. Over the course of eight pages, Jekl shows us how to handle Special Hobby's mixed-media kit, and as usual, he turns out a very impressive model indeed. It's probably my favourite in the book.

The fourth build in this title sees Steve Evans pick up the reins, and features the highly-regarded Hasegawa 1/72 Ju 88A-4 kit. This kit appears to be highly detailed, but tricky to assemble in places, and Evans does a terrific job turning out an impressive model.

These eight pages contain a terrific selection of Regia Aeronautica, ANR, and Luftwaffe aircraft - almost too many to mention. It's fair to say that the main interest is in the Italian aircraft represented, and along with the expected MC.202, MC.205, and G.55 fighters, there are also some multi-engined types represented, in the form of SM.79s, SM.81s, SM.82s, SM.84s, and Z.107s. Luftwaffe types appear in the guise of a Bf 109G-10, an Fw 190A-5, and a Ju 88A-4, though several of the Italian aircraft are depicted in Luftwaffe markings.

Steve Evans is back with a five-page build of the Eduard 1/48 P-39L/N kit. Evans builds it as an Italian co-belligerent machine from 1944, and turns out a most impressive model.

The book's final build article is a bit of a surprise, in that it features the elusive 21st Century Toys 1/32 C.205 kit. It's again handled by Steve Evans over six pages. Kits from this manufacturer were part toy, and part scale model, and this one is no different. Evans shows you how to handle its idiosyncrasies, and turns out a typically excellent result.

The final section of the book is three pages of colour profiles featuring Italian Co-Belligerent aircraft. With the exception of a single Spitfire and a lone P-39, the types are all Italian, and include Folgores, Veltros, Re.2001s, and a small selection of drab multi-engine types.

I enjoyed this title a great deal. Its blend of interesting history, attractive artwork, and impressive model builds is nearly perfect. The magazine format is highly accessible, and can be used as a launching pad for more comprehensive research into the period covered. The included model builds and profile artwork serve as a great source of inspiration for your own modelling efforts, especially if you feel up to tackling a smoke ring or two!