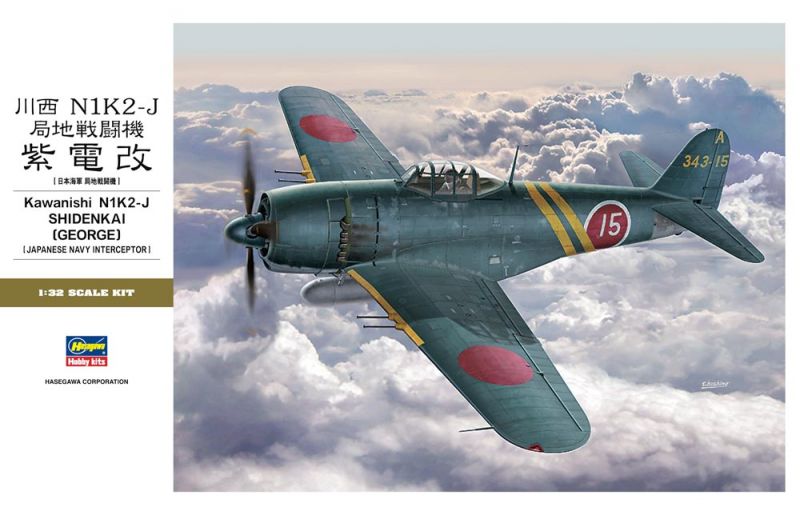 This kit was first released back in 2013, and spawned several subsequent releases, including the anime-inspired boxing that we've reviewed here previously. This release represents the standard IJN N1K2-J, and features 148 parts. As is the case with most Hasegawa kits, no resin or photo-etched extras are included; the only non-plastic components, aside from the instructions and decals, is a small fret of four polythene 'polycaps'. 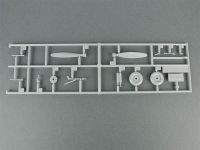 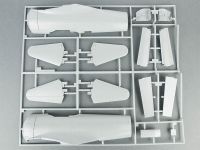 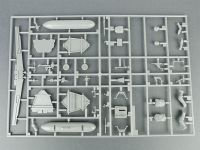 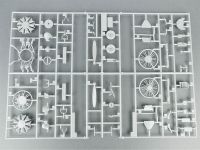 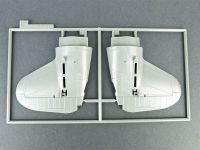 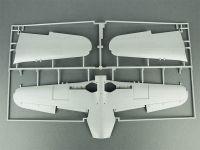 The cowling is a terrific one-piece moulding that enjoys its own sprue: 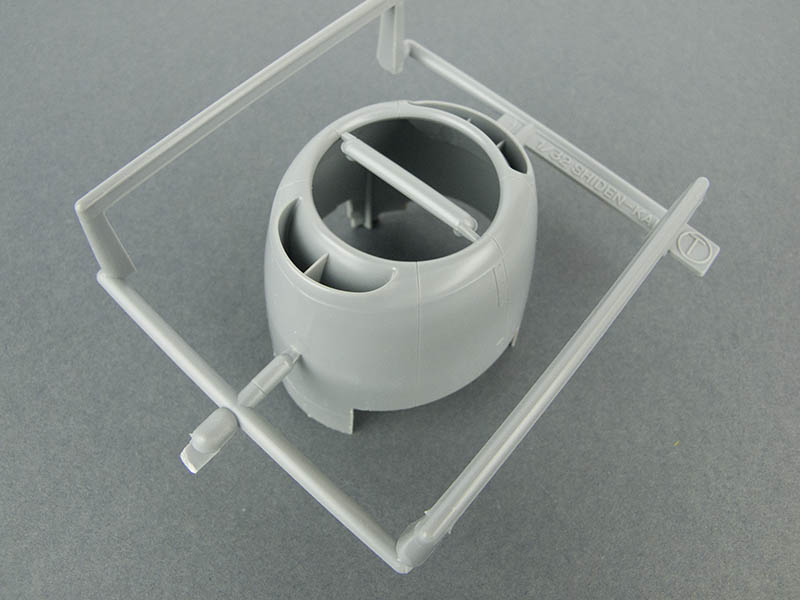 The rear fuselage and tail sections also inhabit a sprue of their own: 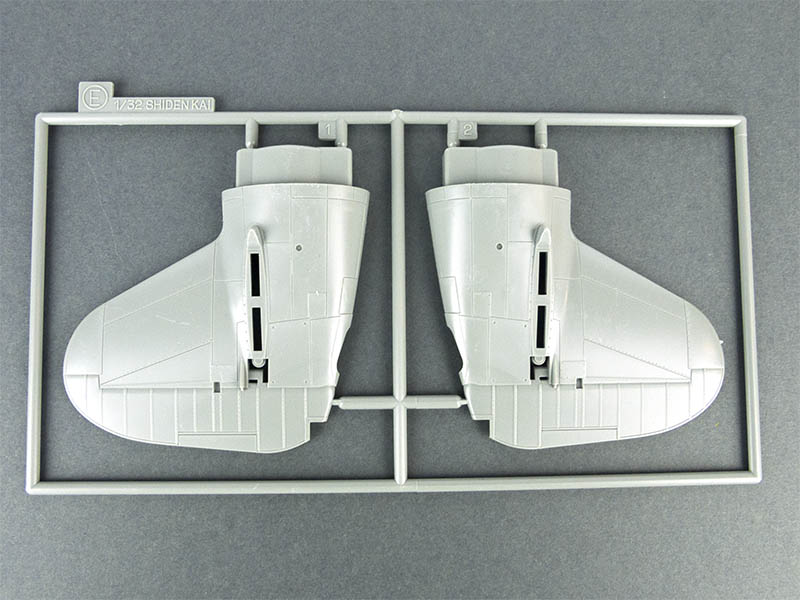 These parts are moulded separately to the main fuselage to accommodate the two different types of vertical fin found on the N1K2. The type included here is the broad-chord fin, appropriate to the two markings schemes provided in the kit. Presumably other releases of the kit feature (or will feature) the narrow-chord tail parts.

The design of the kit is in keeping with Hasegawa's approach for the last 15 years or so, featuring highly-refined surface detail and a relatively low parts count. Detail is adequate for the scale, but leaves plenty of room for improvement.

The engine comes in two parts, with the rear section having only its front represented, since the back will not be seen on the finished model. Detail is again adequate, but there's a nasty mould seam evident on the cylinders of the front section: 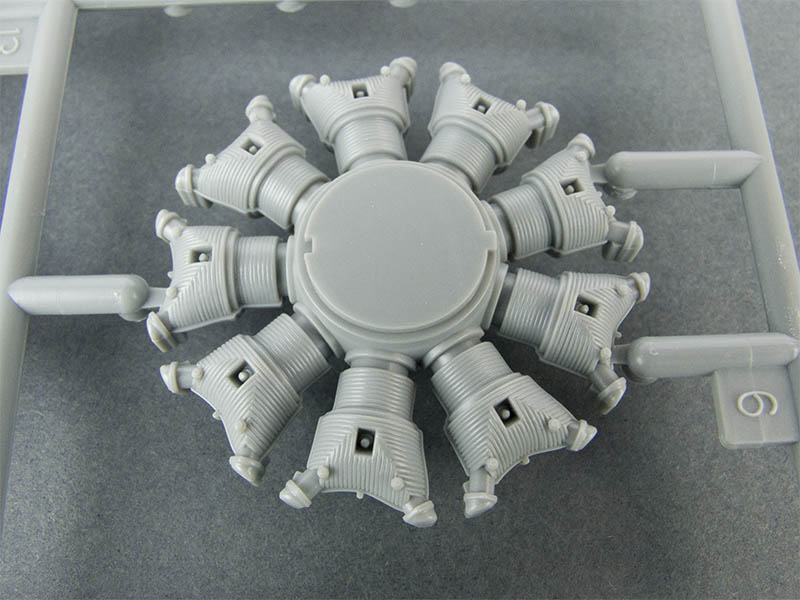 This seam will not be easy to remove convincingly, so this is a shame.

The landing gear bays are separate components from the wing itself, and feature a fair level of crisply-moulded detail: 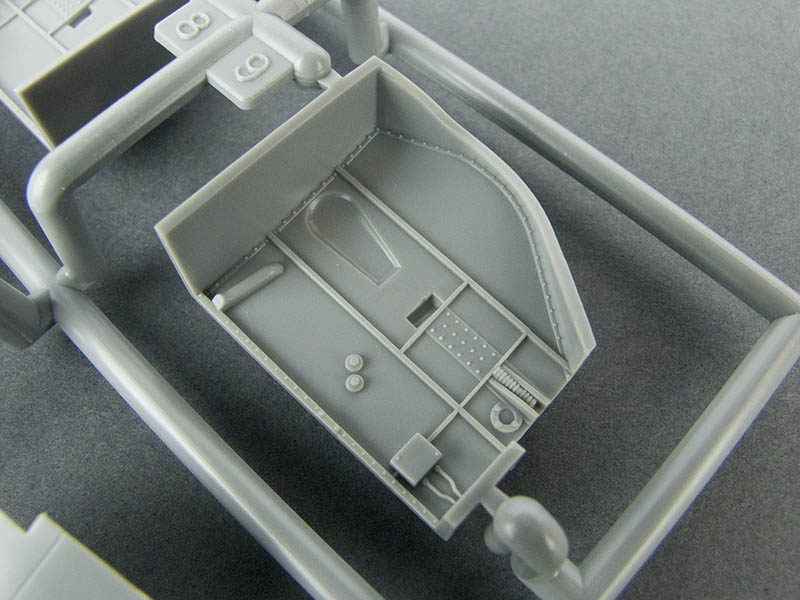 The tail wheel is nicely done, and represents the general level of detail featured in the kit: 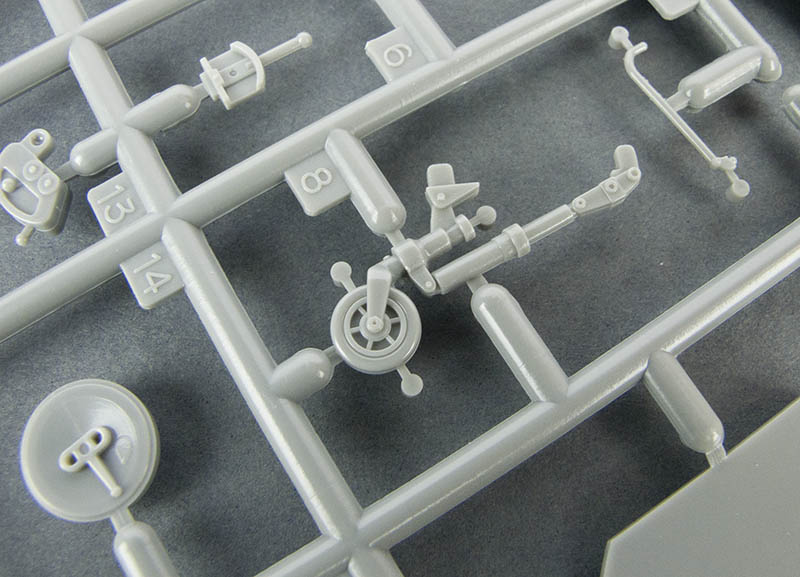 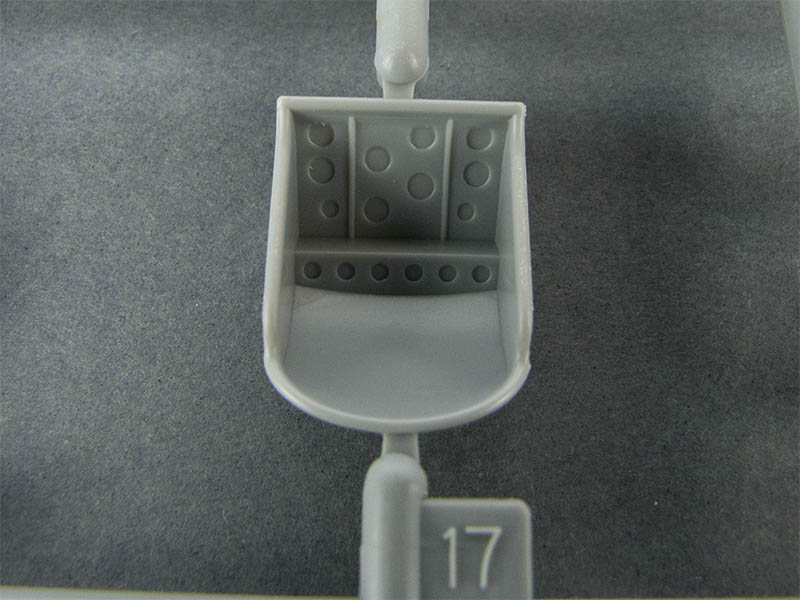 The lightening holes are moulded as simple depressions, and while you could certainly open them up, photos suggest that the seat pan may have been separate to the seat bottom; in other words, the lightening holes may not have gone all the way through the seat (clarifications welcomed!). A seat cushion part is also provided, if you wish to avoid the problem altogether!

The instrument panel features serviceable moulded-on detail, and the decal sheet features a pair of decals should you not feel up to painting the dails: 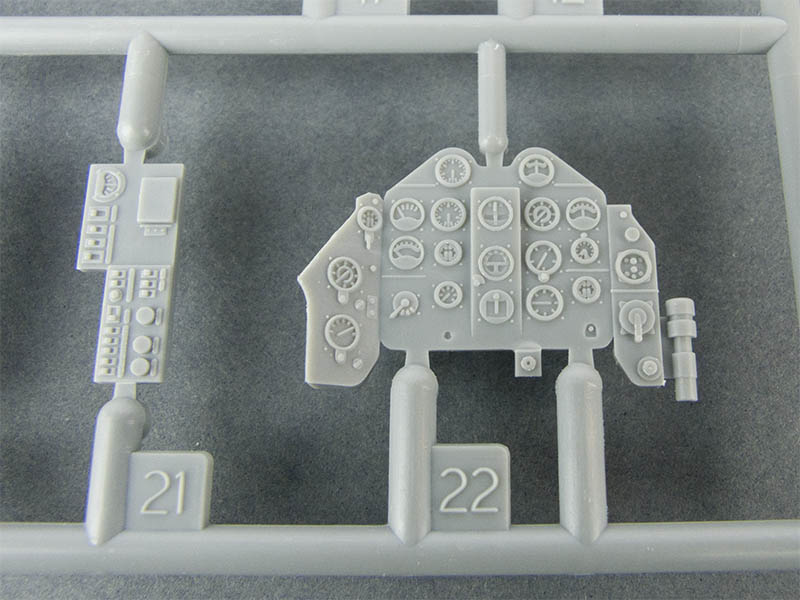 Cockpit sidewall detail is again serviceable, and will greatly benefit from some careful painting: 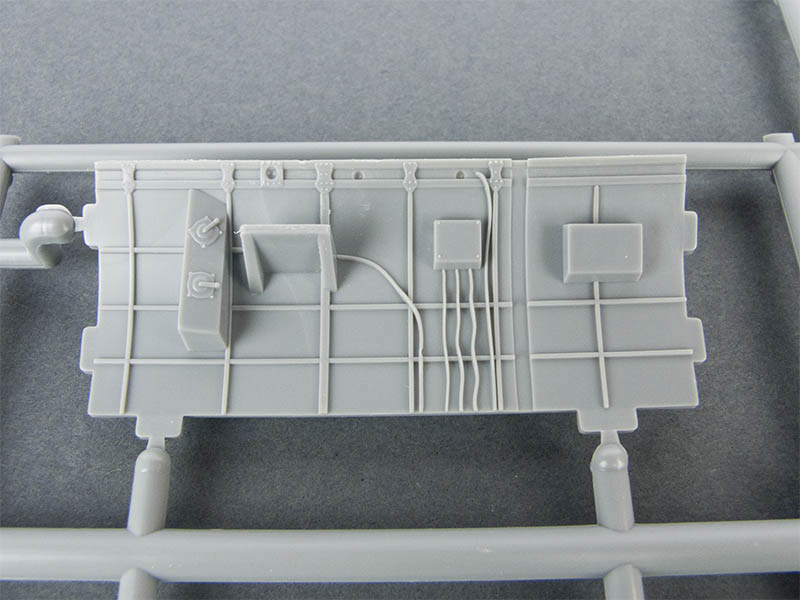 The separate panels fit into corresponding cut-outs in the fuselage sides, though the visible ejector pin marks will certainly need to be eliminated first: 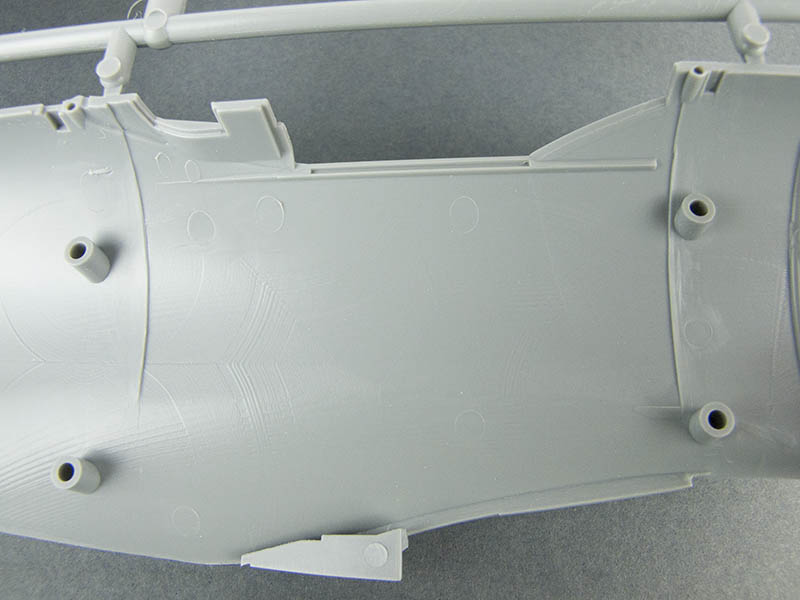 Surface detail is typical of the modern Hasegawa approach, being crisp and petite, but not overwhelmingly peppered with rivet detail: 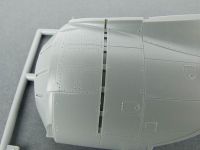 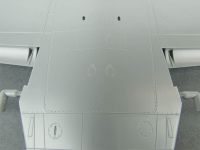 One element of the kit that does annoy me is the cannon fairings moulded as upper and lower halves in their corresponding wing parts: 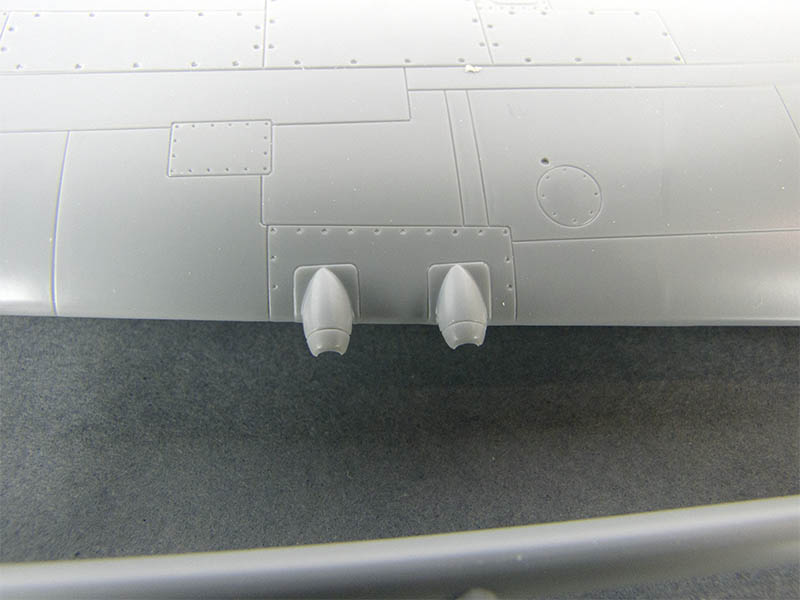 Unless the fit is absolutely immaculate, this arrangement tends to result in seams that are difficult to eliminate, and sometimes a mismatched alignment of parts. I would have preferred to see separate inserts utilised here.

In a similar vein, the barrel parts for the cannons are moulded in standard polystyrene, and one of the examples in my kit was bent: 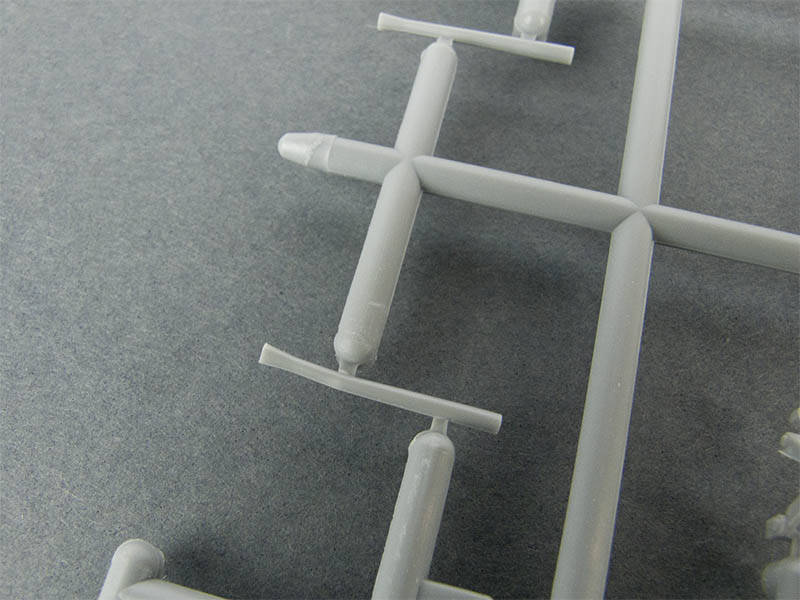 I recommend replacing these with the excellent brass examples from Master Model in any case.

A seated pilot figure with parachute is included, and it comes with two optional head styles: 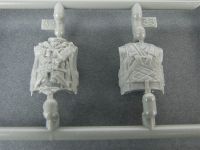 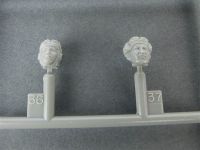 The aforementioned 'polycaps' are to hold the propellor shaft in place without the need to use glue. Four are provided, but only one is required: 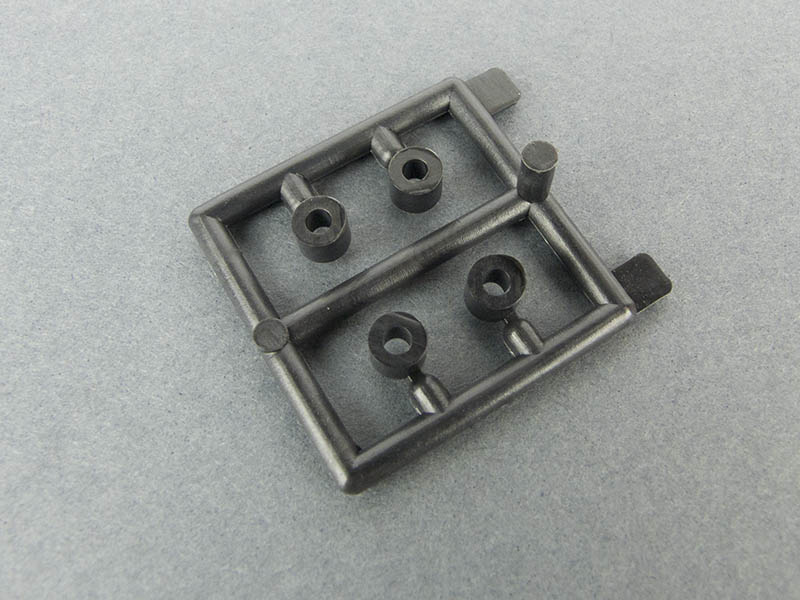 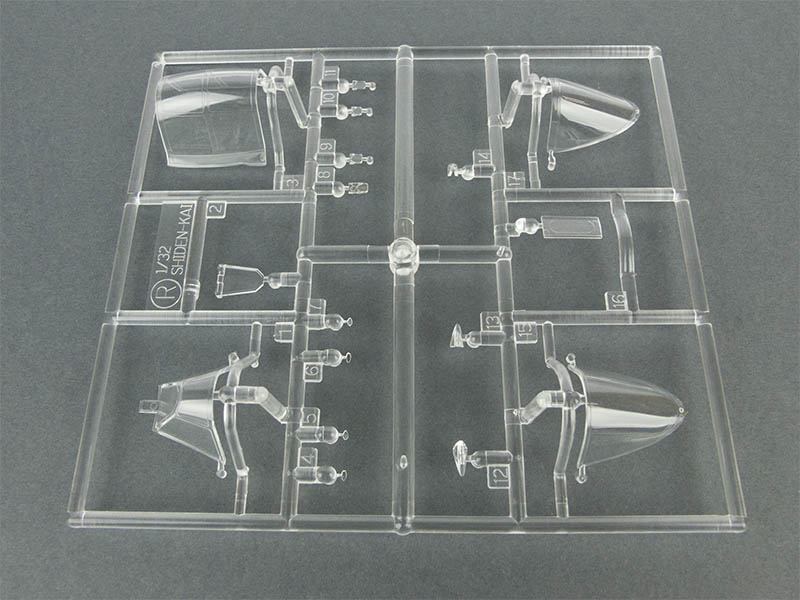 The parts are very nicely moulded, as you would expect, being crisp, clear, and largely free of distortion: 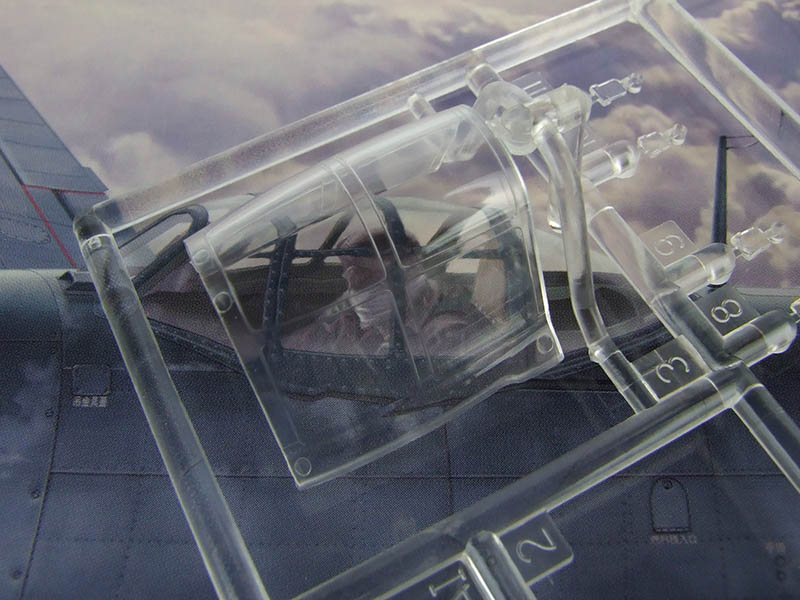 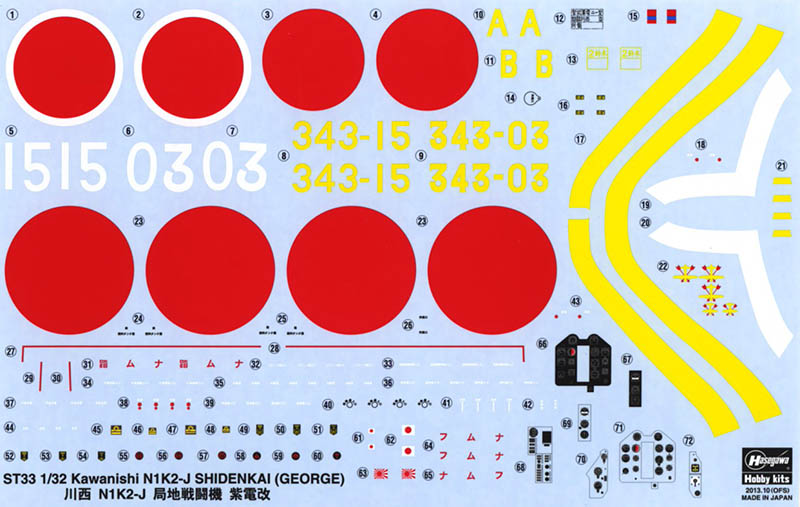 One thing that has changed with Hasegawa's decals in recent years is the introduction of true whites to their sheets, which is a marked improvement over the various shades of beige and off-white seen in the company's kits from years gone by.

Markings are provided for two machines:

Both of the depicted aircraft feature the wide tail fin supplied in the kit. 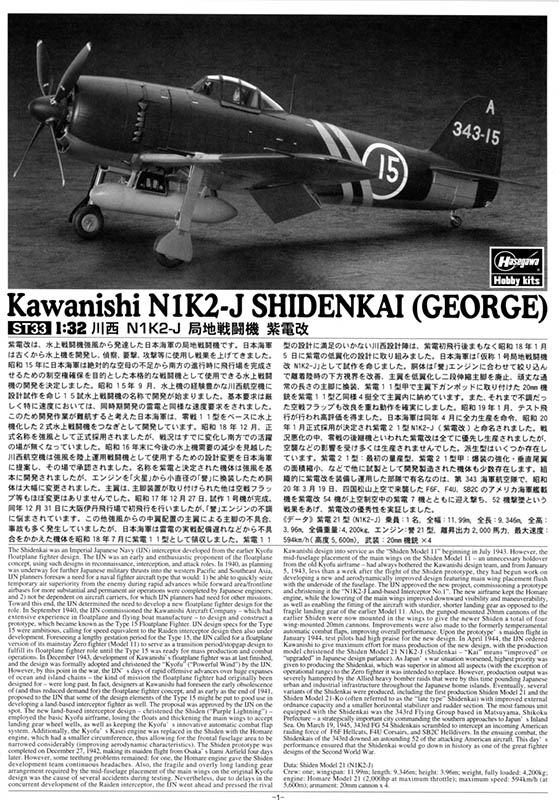 The instructions are in Hasegawa's typical style, being a stapled booklet roughly A4 in size, and filled with exploded assembly diagrams, colour call-outs, and bemusing construction tips in fractured English ("The angle to be held in right hand control stick please attach."). 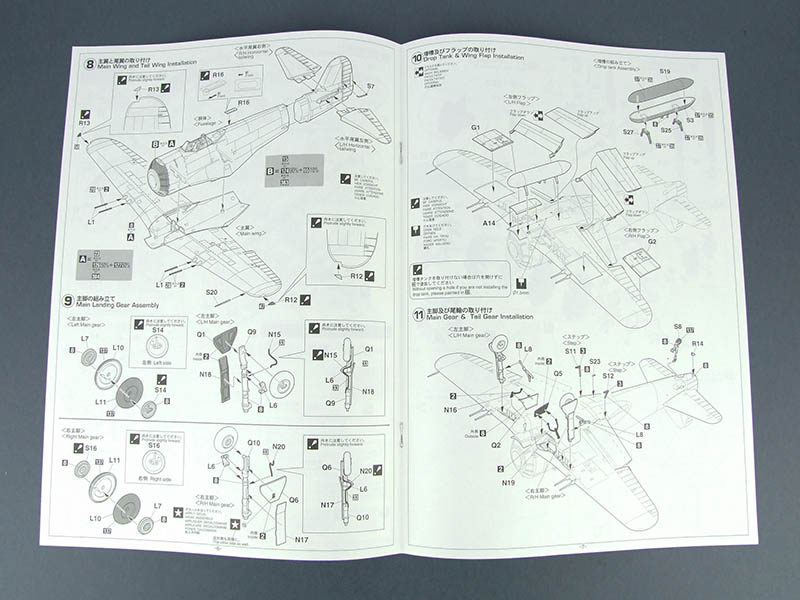 The painting guide is rendered in greyscale, and the colours are given in Mr. Color and Mr. Aqueous Hobby Color paint codes.

This kit is thoroughly Hasegawa: crisp, slick, and professionally produced, with just enough detail to make for an acceptable out-of-box build, while allowing plenty of scope for superdetailers and aftermarket producers to work their magic. The parts count is relatively low, and suggesting it to be a reasonably straightforward kit to build, with no undue complexity to trip up inexperienced modellers. It certainly looks to be a significant improvement over the old Swallow/Doyusha kit, so if you're into large scale Japanese aircraft modelling, this kit is an obvious and recommended choice.