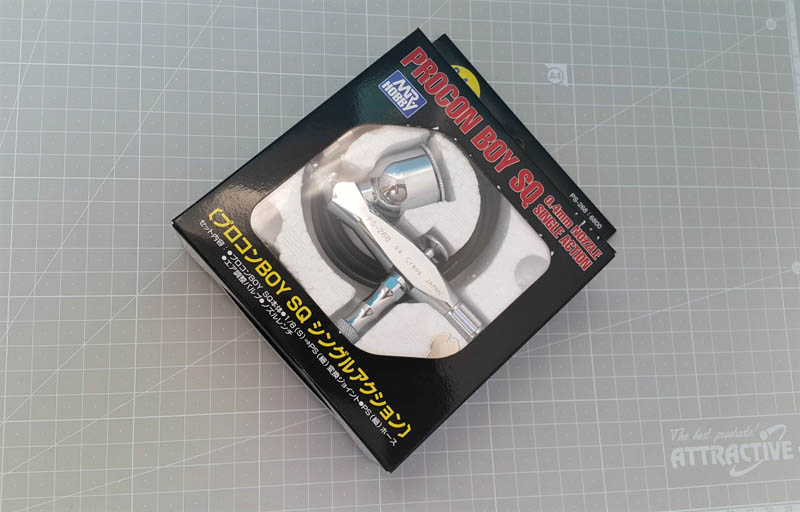 Since many of us have started their airbrushing with single-action airbrushes, I believe that describing that in detail is not mandatory. For those who jumped to dual-action from the get go, well, single-action airbrush offers limited control over the paint spray and the pattern applied, but on the other hand provides consistent and steady flow, with equal paint application if same distance from the model is kept. In other words, you try to set it up before spraying and even though some single-action airbrushes offer limited amount of control, it is not advisable to change it once you have started working.

Those airbrushes are suitable for coverage that needs equal appearance. That goes for varnishes of any kind, primers and eventually, single-tone applications on flat surfaces. Most importantly, metallic paints like Alclad2 are applied successfully with such an airbrush and probably some of you remember the video where Floyd Werner Jr. used one to show how exactly one should paint a P-47.

PS-268 is an airbrush that comes from Japan and it is produced by Mr. Hobby. It is called Procon Boy SQ and is available in three versions. Two colored ones and one silver. The colored ones are newer in design, using lighter materials, reducing their weight almost by half. The PS-268 that is shown here is the silver one, which I believe is the first and older version and it has higher weight.

It comes in a box that is simple and it is designed mostly for store placement, made of thin material with a top opening showing the airbrush. Inside there are instructions, a Styrofoam holder for the airbrush and the add-ons. I have no idea how it is done with the colored versions, but the Styrofoam used instead of the regular foaming makes it look a bit cheap. Luckily, that has nothing to do with its performance.

Inside of the box there are a wrench, a hose with small fitting, suitable for can air supply available from Mr. Hobby and a metal attachment, meant to be used with that can. That latter one has the same fitting as the hose and additionally the airbrush has a connection that converts it from standard 1/8 to the smaller fit mentioned above.

PS-268 airbrush is short and thick chunk of metal, with a weight of over 140 grams. It sits well in your hand and it is made in that modern short appearance, lacking the tail and featuring a design suitable for slightly different work. More often than not, people tend to press the trigger with their thumb here, probably led by the short appearance.

Apparently, that is a successful idea of engineering, since Iwata M1 and M2 Revolution airbrushes have similar appearance and rather high price, while still being a popular sellers. The performance is obviously satisfactory!

PS-268 features 7ml cup with a lid and .4mm nozzle. It has a swivelling tail, which is the end of the short needle and helps you adjust your nozzle aperture. Although limited, while used adequately, this gives you a decent amount of control over the spray lines. I have seen 24th scale Stuka with nice mottling, made solely with single-action airbrush, and far behind the quality of PS-268. Hence my point up there.

The add-ons are a bit controversial. The wrench is mandatory of course, but using air can supply is a heresy in my eyes for whatever application in scale modeling. I still bear the scars of the nightmares of Revell air can supplies, featured with their single-action airbrushes. They are expensive, ineffective and more often than not, left you out in the wild without enough juice to finish the work started.

So even though featured here, the hose, the transition on the airbrush foot and the air can attachment are useless for me. One must be very desperate to go down that road in my opinion. Well, if electricity is down for some reason or your compressor fails – maybe yes. But still. Sparmax offers compressors on batteries, so again – no thanks.

If you are dual-action airbrush user, it will take time to adjust your style to get used to PS-268 from Mr. Hobby. Once you get there though, spraying will be less demanding, especially in terms of cleaning afterwards. Even if you used dual-action constantly, such single-action tool comes very handy. Primers applied with high-precision airbrush are not a good idea. Equal varnish layers and metallic paints are too – better applied with such single-action tool.

The reason is that you can hardly reach that steadiness of the paint and flow mixture when using a sensitive trigger and small nozzle. PS-268 nozzle is .4 which isn’t small per se, but is large enough for such work and again – less demanding in terms of cleaning.

With that said, fine lines with acrylics are achievable, mottling too. Mottling is a little bit harder task though, since the moment you apply trigger action you might get the airbrush to sputter and you got to do two things: be very careful and clean the needle tip constantly. Spraying aside from time to time is also advisable.

Having high-precision airbrush is mandatory nowadays. As much as having a glue. But on the other hand using that for primers and varnishes? That would be a waste of time, energy and basically will be more like shooting a target 20 feet away with a sniper rifle.

There are of course wonderful airbrushes with .4mm nozzle, that are dual action. Sparmax Max 4 for example. Good price and perfect for general work. However the consistency achievable with single-action tool is something that you can hardly get there.

Iwata M2 is rather expensive tool and it has the same set-up as PS-268. Max 4 has the same nozzle but lacks the single-action benefits. So the answer is pretty much there. What I would dare to recommend it to test a single-action first. If you are OK with the style of the work and you can get used to it after a few minutes of spraying, I have no doubts that PS-268 is the best tool considering the nozzle size, the cost and most importantly – country of origin.

Another important factor is the weight. Even if you decided already on getting PS-268 in any of its variants, give it a try at your local hobby shop or dealer. Feel it in your hand. For me – the heavier airbrush works better. But for some is not like that. So there are the colored options.

Overall, if you are into natural metal finishes, you seal with varnish and use primer (yes, some of us don’t do any of these!), I believe that single-action airbrush is a mandatory tool on your bench. With the price and qualities that PS-268 shows it is a great option and most importantly – an affordable one!