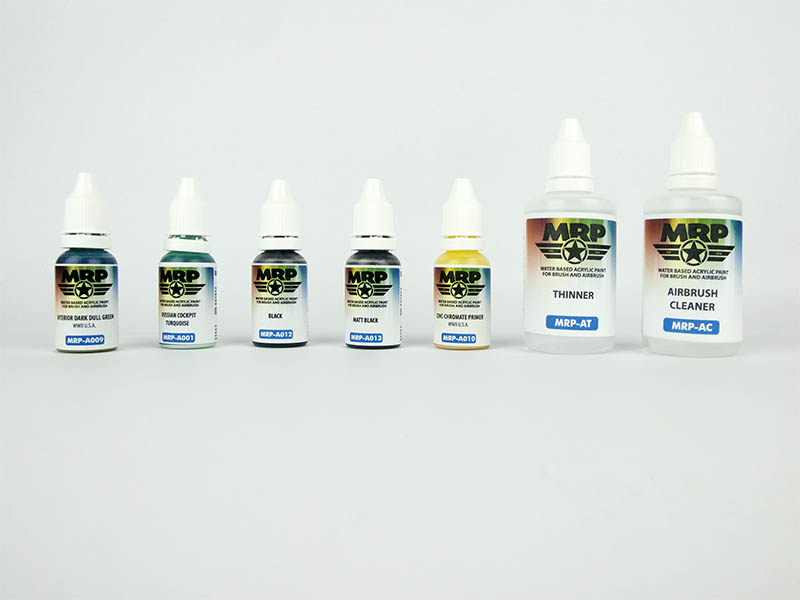 Mr. Paint burst onto the modelling scene back in 2014 with a range of acrylic lacquer paints that quickly became the standard to which all other paints are compared. Being a lacquer-based paint, however, means that they have a strong and slightly obnoxious smell. They are also pre-thinned for airbrushing, and can't be brush-painted at all.

Three years on, Mr. Paint (now rebranded as MRP) has just launched a water-based acrylic range, and has set about duplicating some of the more popular colours from its original range. René Molnar from MRP sent us a set of five sample colours for review, along with a bottle each of the appropriate thinner and airbrush cleaner.

The five colours are as follows: 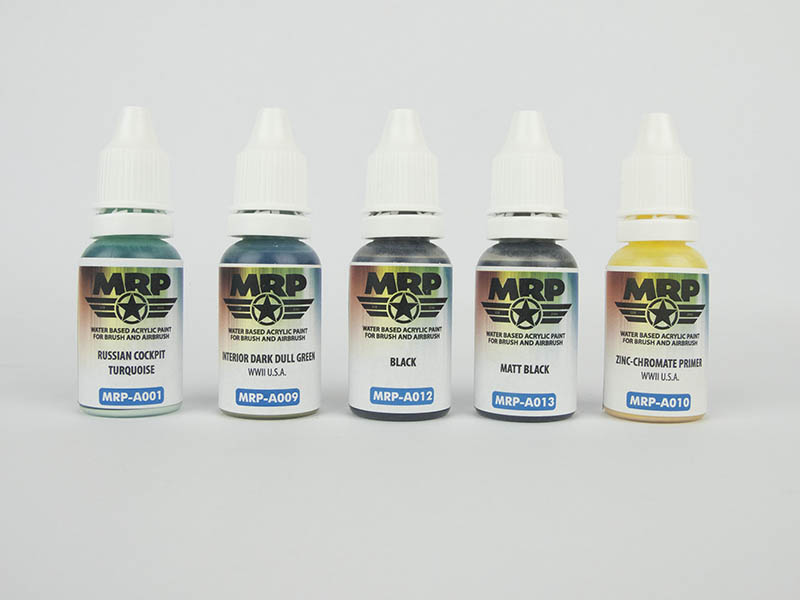 The paints come in the now-familiar plastic 'eye dropper' style bottle, with a plastic screw-top lid and a 17ml capacity. They're described on the bottles themselves as "water based acrylic paint for brush and airbrush". I must confess that I ran out of time to test them with a brush, so can't comment on this particular claim.

The thinner and airbrush cleaner are supplied in bottles of a similar style, but with a much larger 60ml capacity. They are labelled as MRP-AT and MRP-AC respectively: 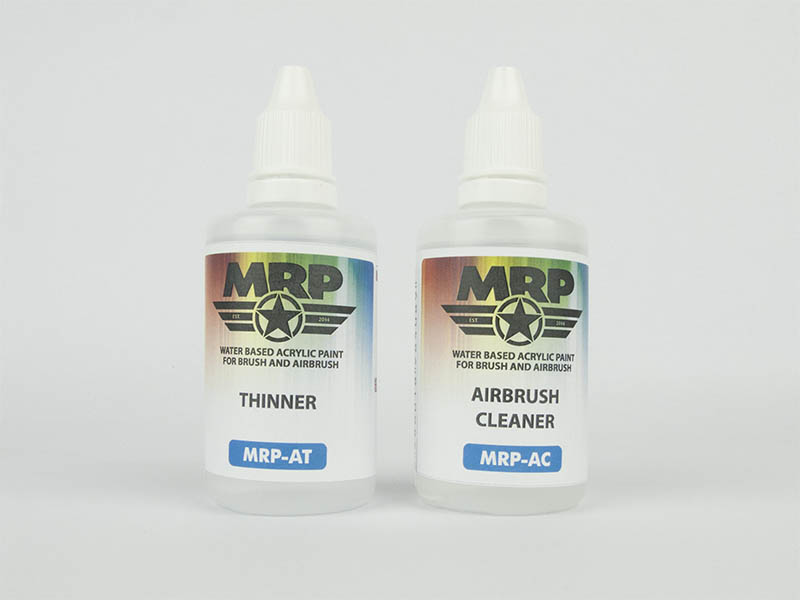 I found myself without a suitable test subject for this review, so I stripped the paint off the wings of an old paint mule, breaking them off in the process! I then sprayed one with a couple of light coats of Tamiya Fine Surface Primer (upper), and left the other in bare plastic (lower): 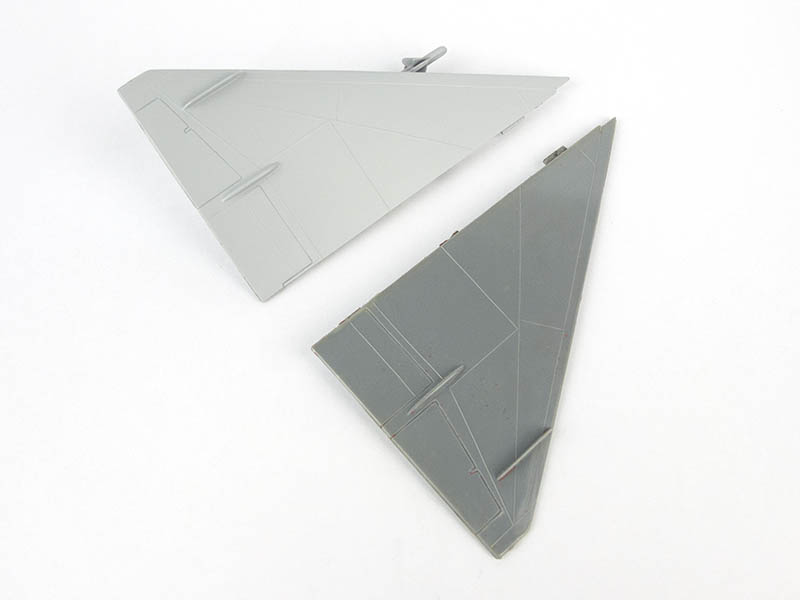 All tests were performed using my trusty Iwata HP-C Plus with a 0.3mm nozzle, which was stripped and cleaned immediately prior to conducting the tests, and once more during testing. Air pressure out of the compressor was a nominal 15 PSI.

I decided to start by testing the airbrush performance of the unthinned paint, straight out of the bottle. I masked off a section of each wing, and put five drops of MRP-A012 Black into the airbrush cup. To my surprise, the paint flowed smoothly and easily, and quickly laid down a nice coat of paint, with good, even coverage: 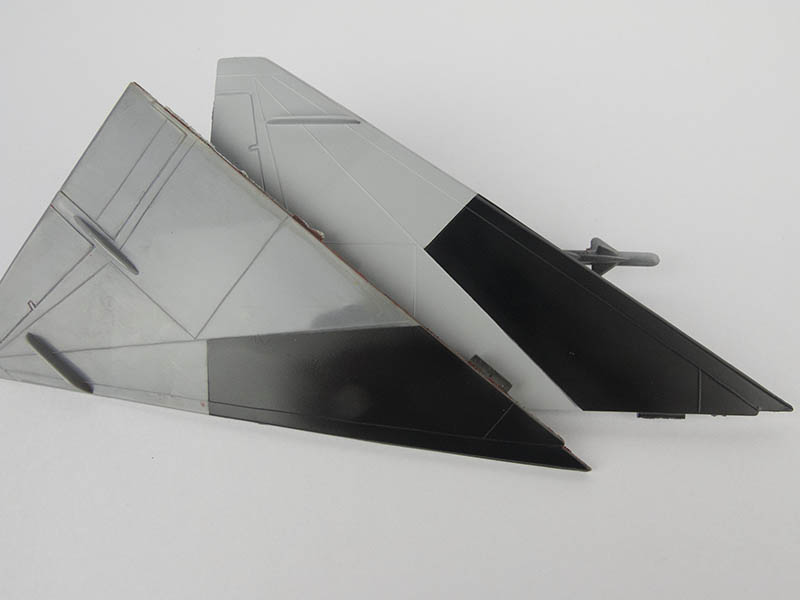 Note that the appearance of there being two colours on the lower wing in the image above is a trick of light! There's some slight blushing evident to the naked eye on each wing, but I suspect that's a result of my perfunctory surface preparation, rather than any attribute of the paint itself.

One thing I noticed immediately is that these paints are practically odourless, with no noticeable smell from either the thinned or unthinned mixes I used. I deliberately left my extractor off for these tests, and barely noticed any fumes or unpleasant smells while spraying. I would recommend using proper extraction regardless, but these paints are far less obnoxious than their more established lacquer-based stable mates.

I wanted to test the adhesion of the paint, over both the primer and the bare plastic, so I let the black cure overnight—roughly 12 hours or so—and then masked over it with full-strength Tamiya tape. Note that there's a recommendation on the bottles themselves to use a primer, but I'm happy to report that when I pulled the tape off after spraying the next colour, the black paint remained completely intact and unblemished in both cases. 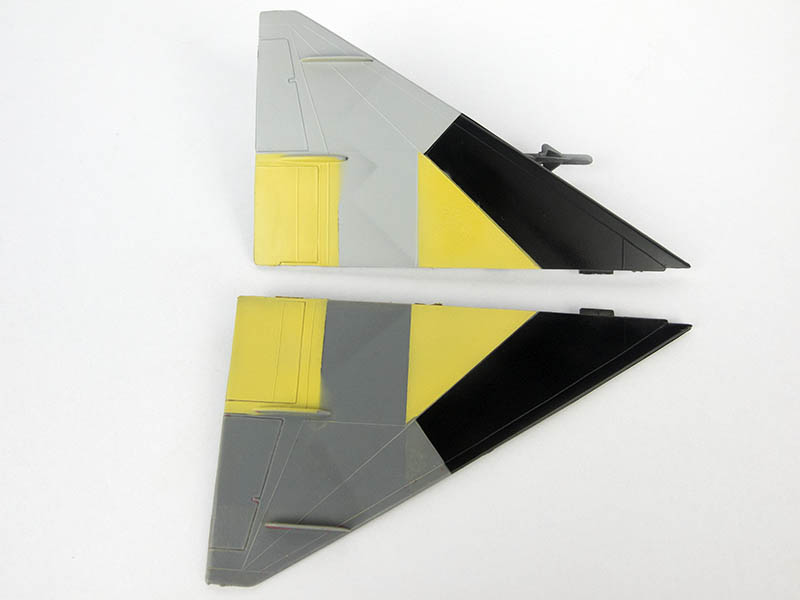 The second colour in the photo above is MRP-A010 Zinc-Chromate Primer (WWII U.S.A.), but this time I added two drops of the MRP thinner to five drops of the paint, and painted in the triangular sections you can see on each wing. I immediately noticed a degradation in its performance. The flow out of the airbrush no longer felt as smooth, and the paint hitting the model's surface appeared to be more watery - too thin, in other words. I could achieve a decent finish with good coverage by really backing off the airflow, but I was surprised that the effect seemed so dramatic when adding so little thinner.

The thinner itself appeared to dilute the paint with great efficacy, and I saw no unusual responses from the paint, other than being too thin due to not needing to be thinned for airbrushing. The airbrush cleaner was also quite effective, though I always give my airbrushes a final flush-out with lacquer thinner between colours.

For the next test, I decided to try using my trusted go-to paint thinner, Mr. Color Thinner from GSI (Gunze). Using the same ratio as previously (two drops of thinner added to five drops of paint), I sprayed the yellow rectangular areas you can see in the photo above. Coverage seemed better, with a less watery result, but paint flow out of the airbrush was worse, with a tendency to spit or 'dump'.

For this type of painting, my conclusion (and recommendation) is to eschew thinning this paint altogether, as it seems to perform best when used unthinned, straight out of the bottle.

But of course, there are other types of painting that you can achieve with your airbrush, such as mottling, fine lines, and close-up detail work, so I decided to use MRP-A001 Russian Cockpit Turquoise to test these approaches. And this is where things fell apart somewhat.

I used the paint unthinned, and for the first few seconds, I achieved the expected paint flow and fine-line performance. But almost immediately, I had to dramatically increase the airflow to get any paint coming out at all, which inevitably gave me anything but decent fine-line performance. Curious! I stripped the airbrush and tried again, with the same result. Frustrating!

At this stage I began to suspect my airbrush had developed an issue, so I gave it another thorough clean, and pulled out a bottle of the original Mr. Paint acrylic lacquer paint (MRP-133 Blue-Grey) to test with. This gave me the expected trouble-free performance, with fine lines and the required level of control.

In the photo below, you can see squiggles in MRP-A001 Russian Cockpit Turquoise that vary from acceptable fine lines to broad watery splats. The control colour from the lacquer range appears mid-grey, and is consistently thin with no splats or uncontrolled paint dumps: 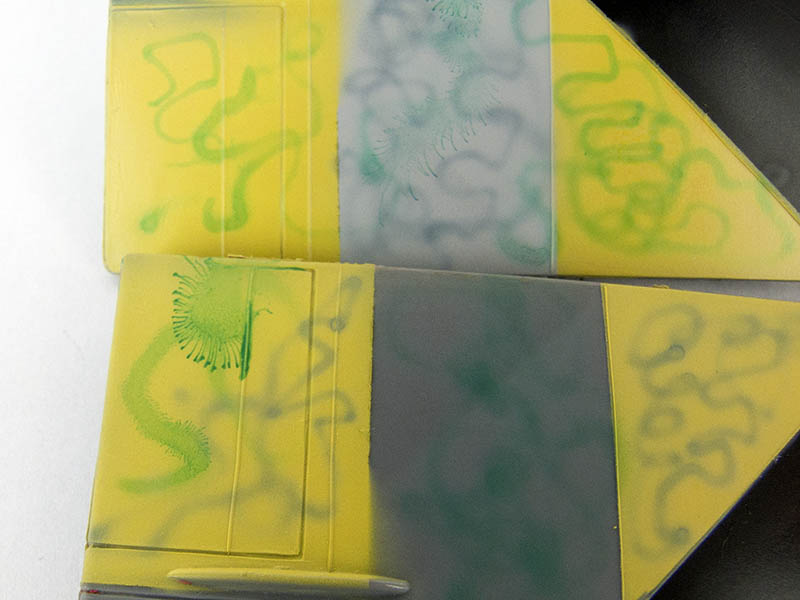 I wish I had an adequate explanation for this discrepancy. It simply doesn't make sense that a paint would behave perfectly when going for broad coverage, while completely refusing to cooperate when attempting to do fine work.

I decided to strip the paint off one of the wings and start again. I first chose a different colour (MRP-A013 Matt Black), and then repeated the tests with unthinned paint, and then with two drops of thinner added to five drops of paint. This resulted in no discernible change or improvement in fine line performance. I decided then to repeat the same pair of tests using my Harder & Steenbeck Evolution CR Plus airbrush, which has a 0.4mm nozzle. The results were, disappointing, the same. This clearly rules out the airbrush as the source of the problem, and at this point I simply gave up.

The image below shows the combined results of the final set of tests: 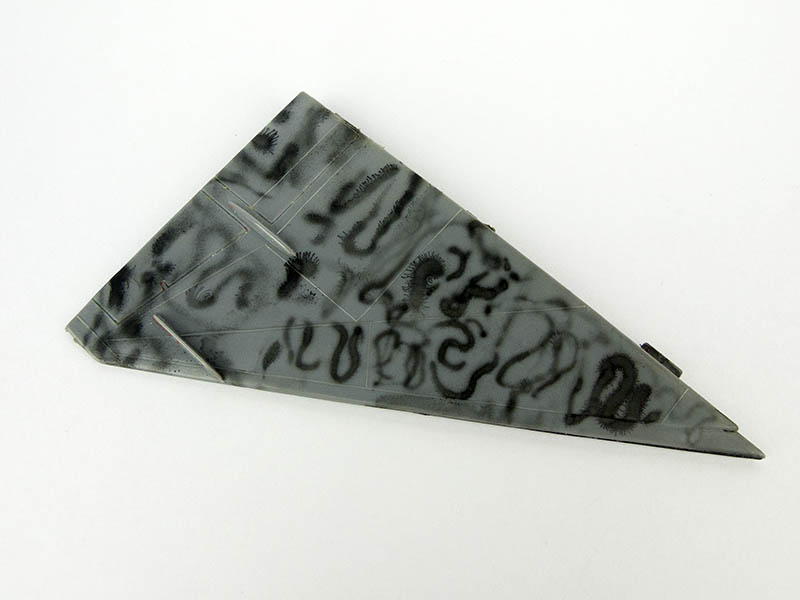 Based solely on my tests, I can say that this new aqua line from MRP sprays well in a high-flow setting, doesn't need thinning, and dries quickly to a robust, tape-resistant finish. In that regard, it's better than any water-based acrylic I've used, and at least as good as the alcohol-based acrylics. And the almost complete lack of any obnoxious odours while airbrushing this paint is a big plus.

But as we saw, it also has major issues when you dial back the paint flow for fine line work, and I really can't explain why. I would be interested to hear from other users of this paint about their experiences doing fine work.

As a general performance hobby paint, I think it's probably the best water-based acrylic I've used so far, and I have no hesitation in recommending it for that kind of use. But its lack of cooperation for fine detail work is mystifying, and I think it requires further investigation on my part. Until I can solve or understand this problem, however, I can't recommend these paints for any kind of work that requires a great level of control and finesse. Here's hoping that someone or something can prove me wrong!

Thanks to Mr. Paint for the review samples.