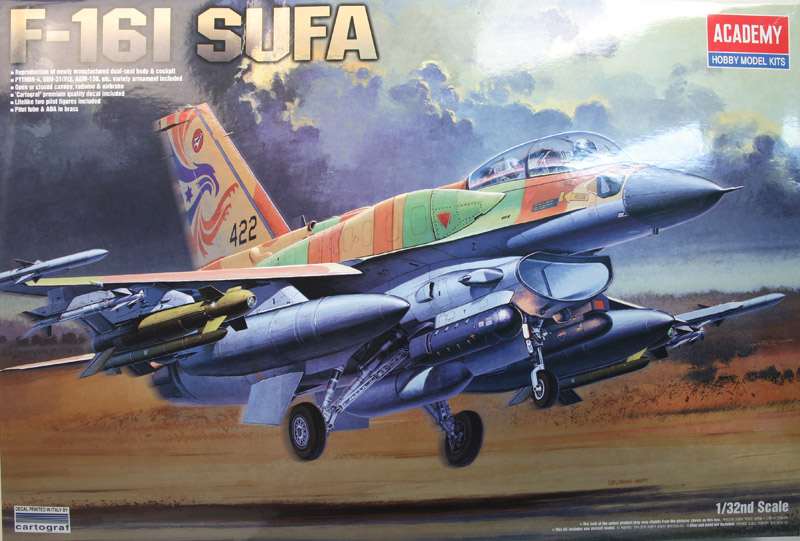 Academy is the first company to follow up their F-16 kits with a two-seater. In this case, it is the Israeli version, the F-16I 'Sufa.' As opposed to the typical twin-seater being a trainer, the 'Sufa' has increased weapons capabilities. It uses the second seater for weapons management and a second set of eyes, similar to how the USAF uses the F-15E. The 'Sufa' is an advanced version of the F-16 Block 52, incorporating the dorsal spine for additional avionics. It also uses the conformal fuel tanks and the more powerful P&W F100-PW-229. The 'Sufa' also sports the very interesting Israeli camo scheme, which along with the large ordnance loads, make it a very appealing model.

Let's Look at the Kit

Opening the large box, we are treated to a lot of plastic! 14 sprues of grey, and two sprues of clear, plus 3 turned brass parts and a small PE fret. I am not sure how many parts there are in all, but to give you an idea, 224 parts are marked as not for use!!! Along with the parts are two large decal sheets, one for aircraft markings and another solely for weapons and pylon markings. They are done by Cartograf so expect them to perform well.

I had initially planned to do a pretty in-depth review, but going through the DACO "Uncovering the Lockheed F-16 A/B/C/D" book led me to a simple conclusion: I don't know enough about modern jets! Unfortunately, I don't have the IsraDecals 'Sufa' book, so I am going to mostly talk about what is in the kit with a few comments about accuracy as I have learned from other remarks on the internet and those that are pretty obvious. I will do a sprue by sprue running commentary.

Sprue A is the new fuselage for the two-seater. It is done in a modular fashion which allows for the building of any of the two-seat subtypes as best as I can tell. Interestingly, the sprue is dated 2005, which I believe is when the original CJ kit came out. The surface detail is very nice with finely recessed rivets and panel lines and representations of piano hinges; I have provided a sample picture of that detail. The only negative is the cockpit openings appear to be slightly off, the forward too wide (as per the CJ kit) and the rear shaped a bit off. This throws the canopy shape a bit off, too.

Sprue B has wings and tailplanes, except the rudder parts are all not for use! The parts here allow for building the kit as a F-16D without the dorsal spine, with your choice of tail fairings, standard length or with the parapack. This allows two-seater variants from a host of different countries to be built from the kit. I have also included a pic of the surface detail of one of the wings.

Sprue C is I believe directly from the original F-16CJ kit, with wheel well parts for both small and large mouth jets. It also has on the sprue the one-seater cockpit tub and cockpit parts and one of the ejection seats(the second is on sprue K but is exactly the same). In my opinion the seats, although made up of 8 parts, would best be replaced with a resin set. You just can't replicate that complicated, most visible, part of the cockpit in injected plastic. The seat belts especially need help. Also, it has been said the seats recline back a bit too far? This was a problem with the original kit also.

Sprue D is I believe also directly from the original F-16CJ kit, with landing gear and parts for the intakes for both small and large mouth jets. Unfortunately, there have been no corrections from the original kit, and this is the worst part of the kit in terms of shape errors. The intake is also missing the non-ram air intake typical of the 'Sufa.' I have heard rumor the aftermarket may help in this area, however. It also includes the main gear doors, which were not corrected from the original kit, being a bit off in shape.

Sprue E is once again directly from the original F-16CJ kit. This time it includes the centerline tank and unused targeting pods and engine parts for both the GE and P&W engines. There are also several parts for the nose radar details if you decide to show the nose in the open position.

Sprue F are the original weapons sprues (two are provided) from the CJ kit. These sprues include most of the US weapons supplied with the kit. Most will not be used with this kit, including AIM-9X's and AIM-9M's so will help fill the spares box, or help arm your kit if you build it as a F-16D.

Sprue H include pylons for the weapons and a few misc. details, such as a boarding ladder. 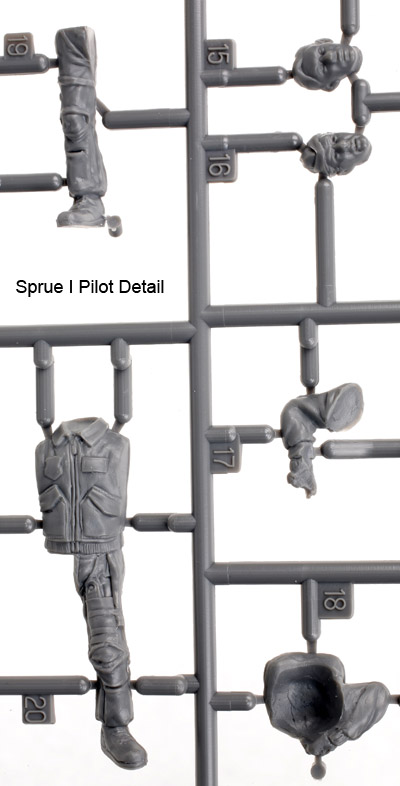 Sprue J (two are provided) supply the new weapons, including the Israeli Python-4 missiles, GBU-31(V)3 JDAM's, GBU-38 JDAM's, AGM-130's, AN/AXQ-14, and 600-gal wing fuel tanks. Unfortunately, I have heard the 600 gal tanks are off in shape but haven't been able to verify it. Even though this sprue is new to the kit, there are still several parts that are unused. 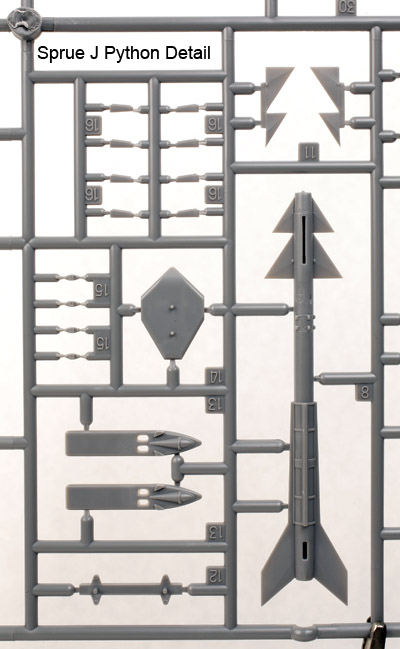 Sprue K is also new to the kit, which includes the new tail for the 'Sufa', or any other F-16 with the dorsal spine. This sprue also includes the conformal fuel tanks, and cockpit parts for the two seater. Two sets of instrument panels are provided, one set being for the 'Sufa.' I have not been able to identify which variant the other panels are for. Maybe a late or European F-16D? They did not match any of the drawings in the Daco book as the MFD's are shaped differently. I have included pics of the two sets of panels. Obviously Academy will be re-issuing this kit as a F-16D at some point, though. Also on the sprue are the new IP hoods. I have included a pic showing the new one alongside the old one. The new one is much closer to the real thing! 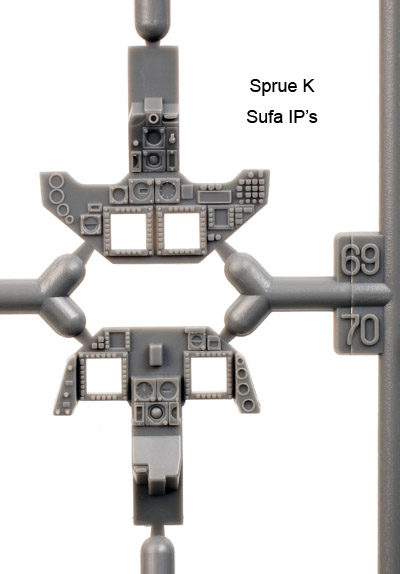 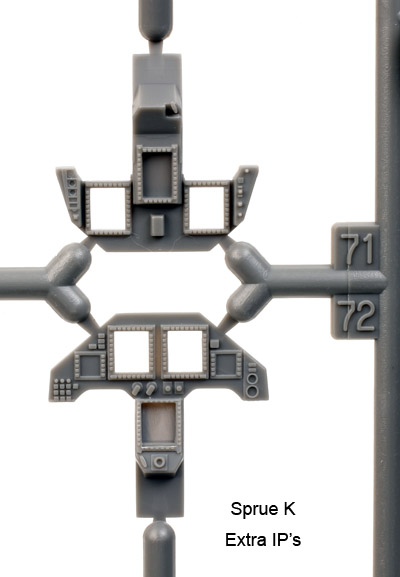 Sprue M contains all the parts for the dorsal spine and details for same. Twenty seven parts total for just the spine!

Sprue L is the clear parts. There are two sets, one in clear and one in smoke. The smoke color looks good, it is not overly dark, and should look good on the model. Besides the canopies, which look very good with only maybe the slightest hint of a seam down the middle that should only take a minute to remove, the clear parts include windows for the navigation and weapons pods that use them, lamps for around the aircraft, and a slew of MFD covers for the cockpits. 39 clear parts besides the canopy!

Other Parts include the small PE set which includes bases for some of the antenna, what are either vents or chaff dispensers on the spine, and textured panels just forward of the elevators. Three turned brass parts are provided. The larger piece is the pitot tube, the two smaller parts are for two small antennae located each side of the nose cone.

Decals are for four different Israeli aircraft from 4 different squadrons: #422 from Tayeset 253 "Negev (Ha' Negev)"; #494 from Tayeset 119 "Bat (Ha' Atalef)"; #878 from Tayeset 201 "The One (Ahat)"; and #857 from Tayeset 107 "Knights of the Orange Tail (Ha' Rosh Ha' Aryev)." The decals appear to be of good color, good registration, and clearly printed. As I said, they are printed by Cartograf, so should perform well. Another full sheet is devoted to ordnance and misc stencils. It includes also chaff/flare grids, ejection seat markings, cockpit placards and MFD's, gear placards, and a myriad of other small markings. What is really nice is the red lines dividing areas of the decal sheet are made up of "Remove Before Flight" tags, both in Hebrew and English! Neat!

Instructions are made up of 24 A-4 pages, including 4 pages of stencil layout and a page showing a couple of possible load combinations. However, unless I am missing something, there are no sheets showing markings options other than the box sides. It isn't hard to figure out, but puzzling it wasn't included.

Whew! There is a lot in this kit. I think this rates up there with Academy's F-18's for detail and options right out of the box. Maybe even better with the different variants that could be done. Even though there are a few nagging errors that it would have been nice to see corrected in this new issue, with all the options and spare parts provided, I still give this kit a... 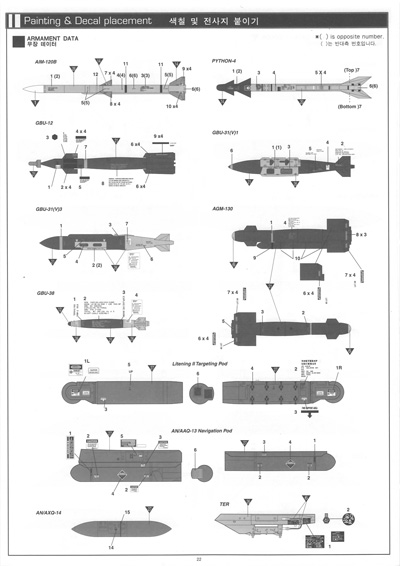 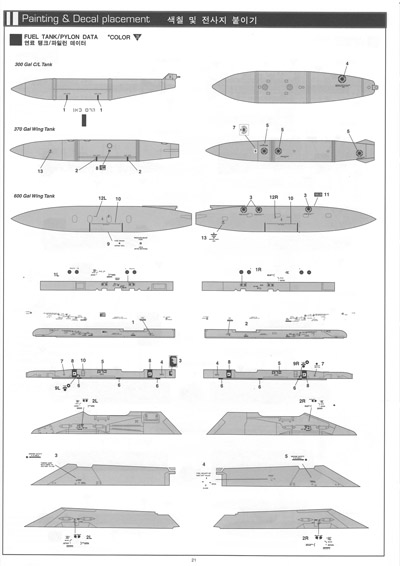 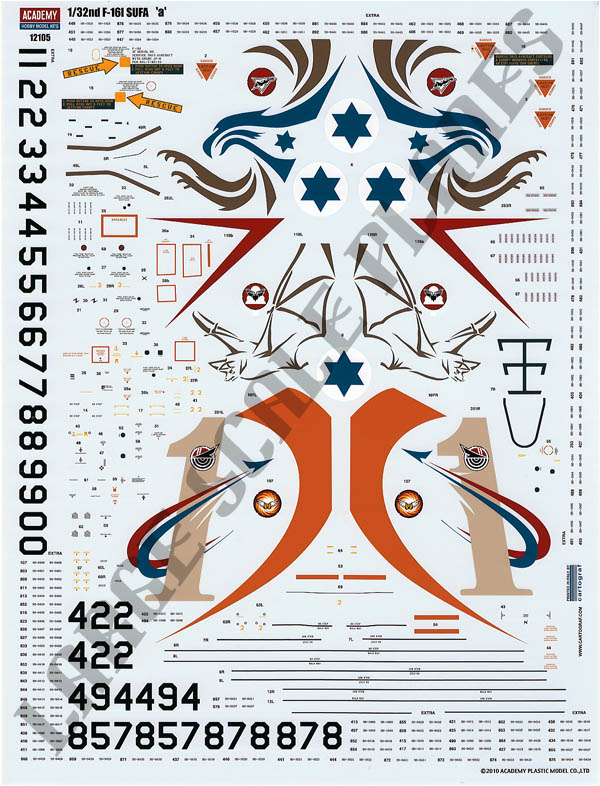 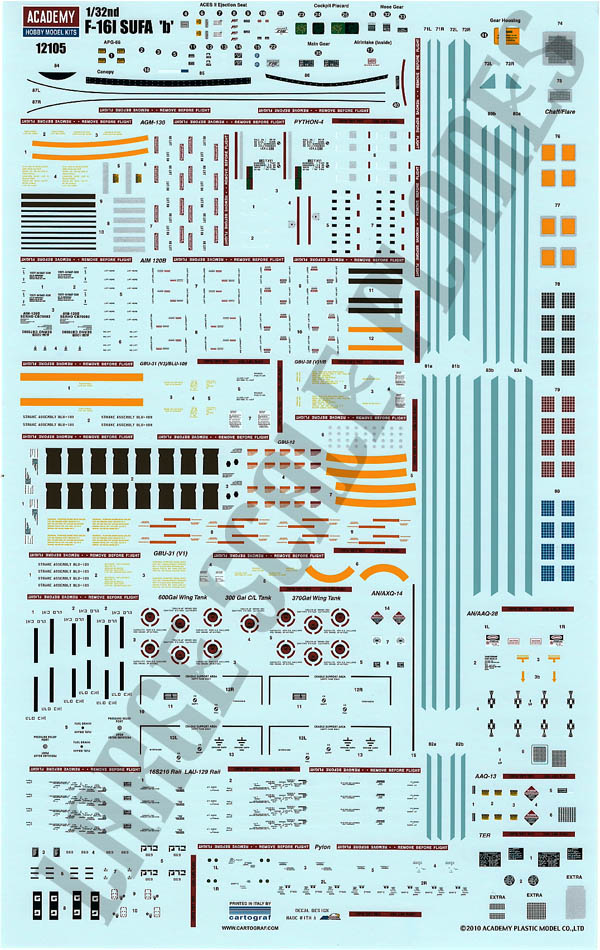 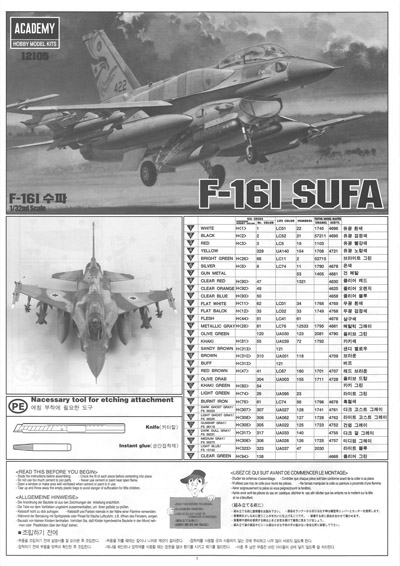 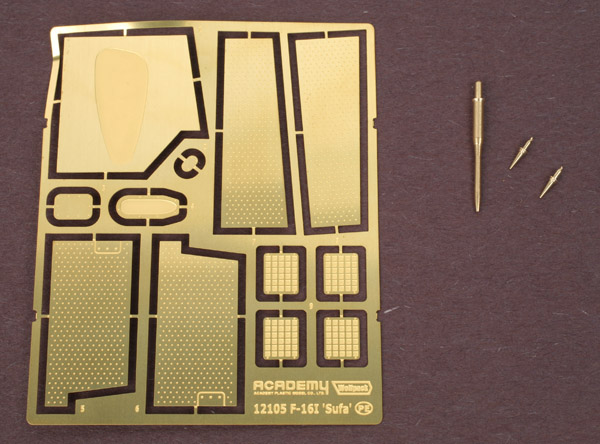 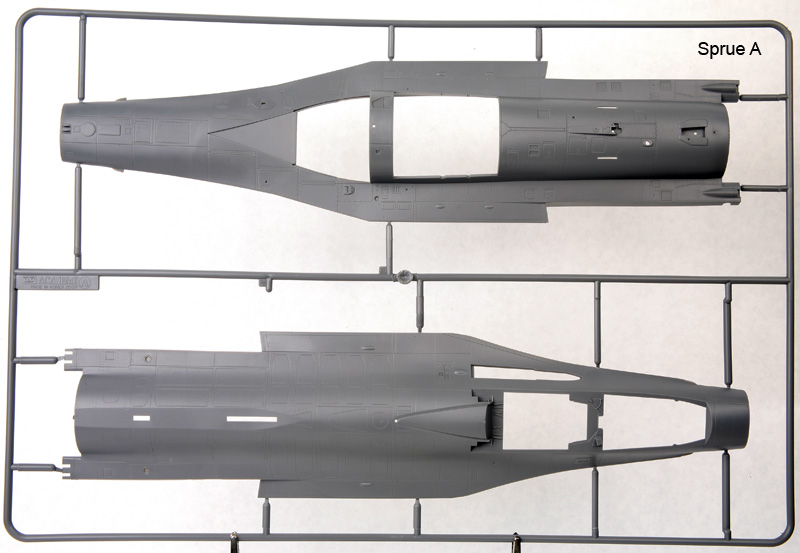 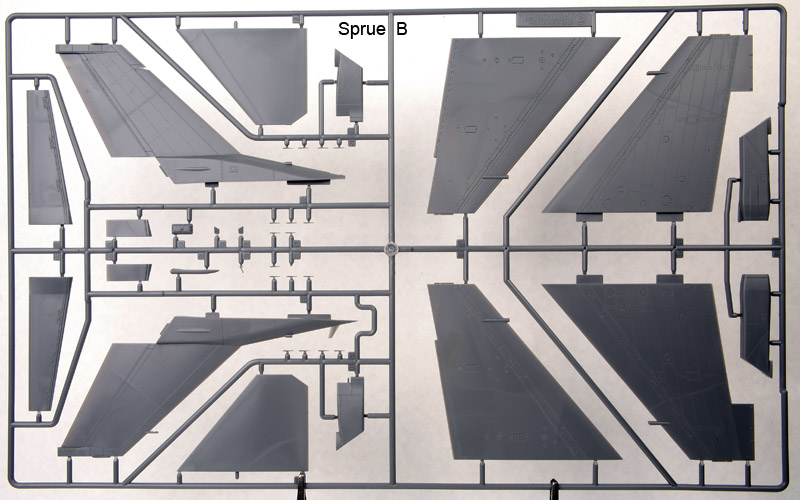 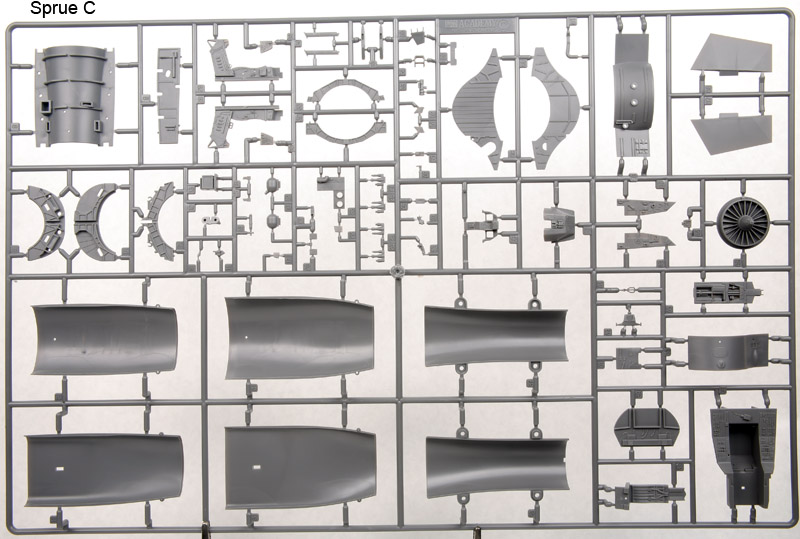 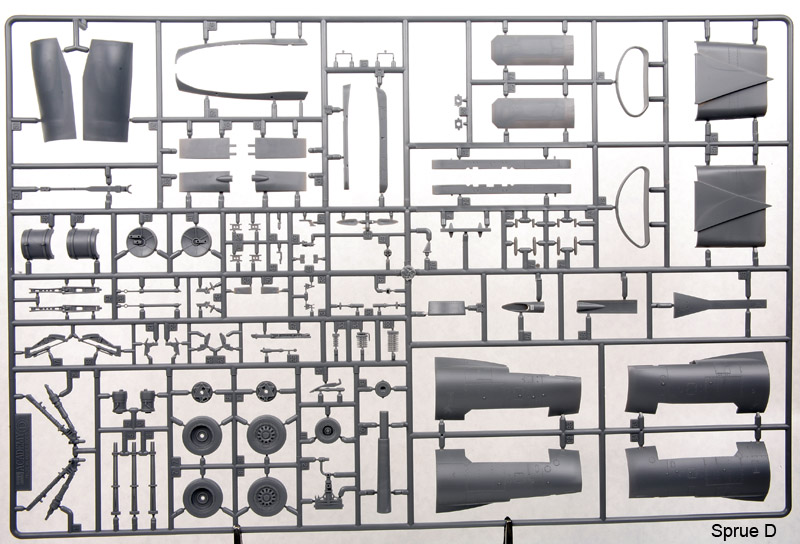 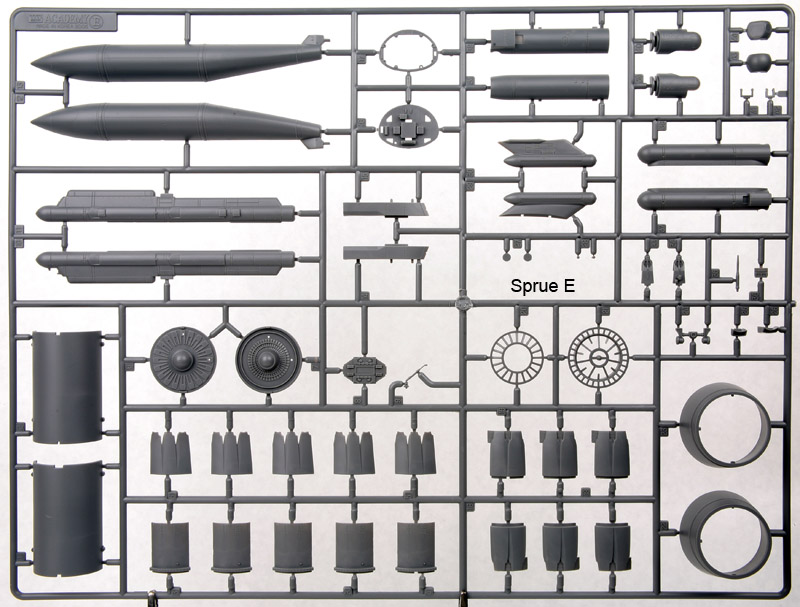 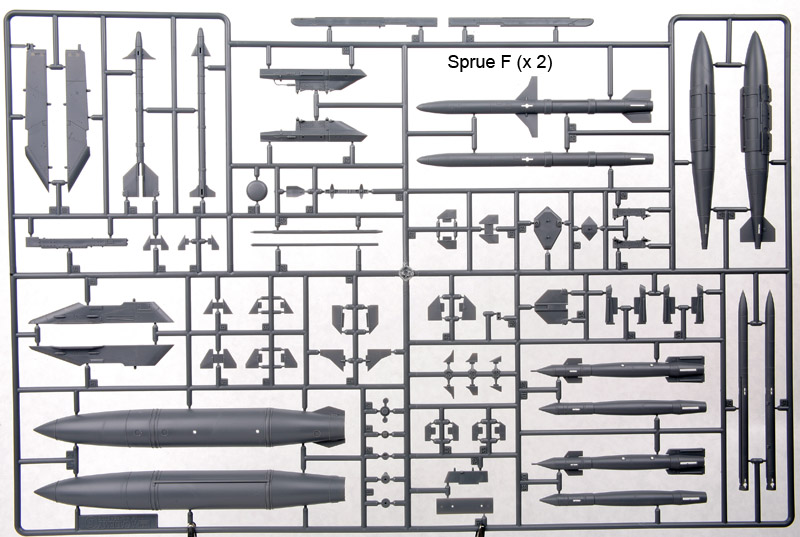 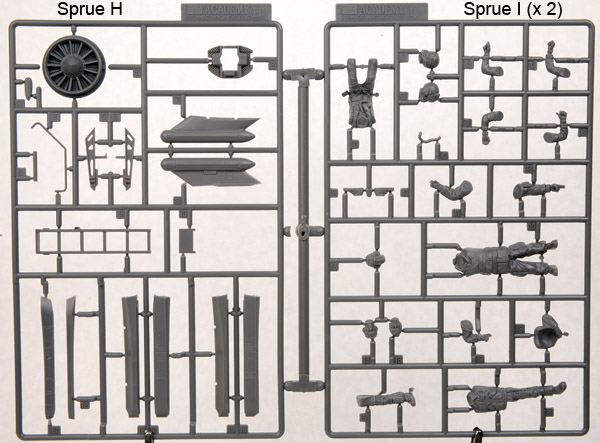 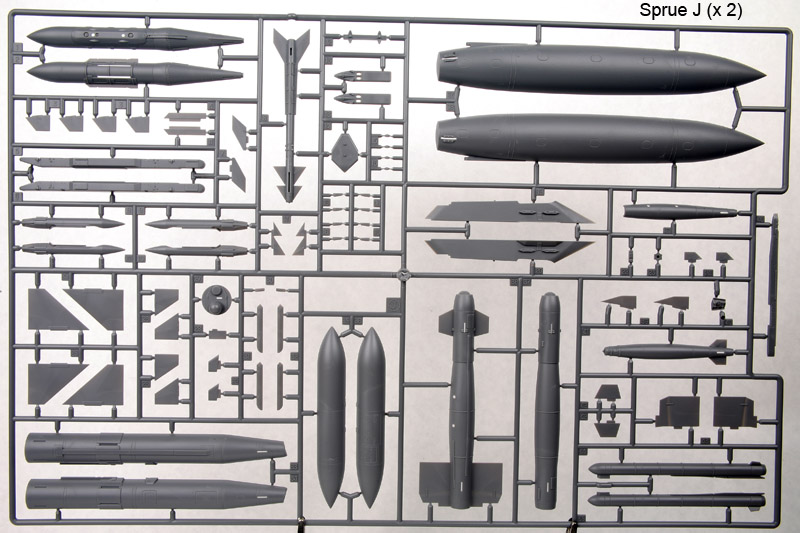 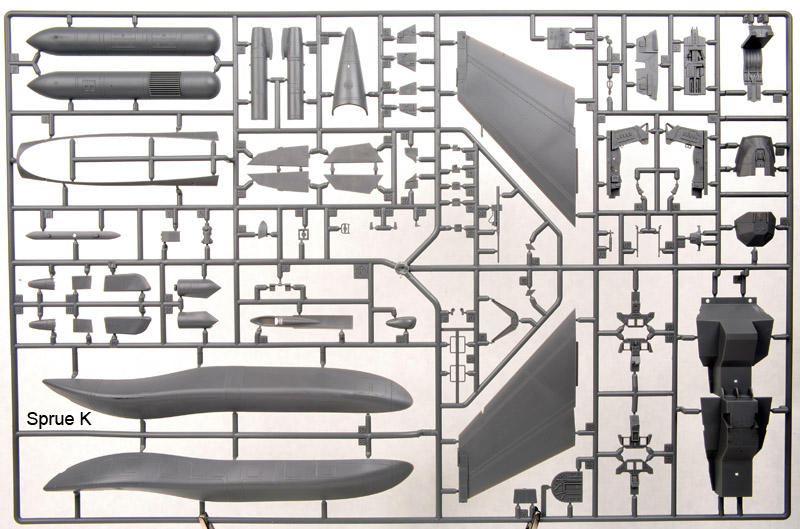