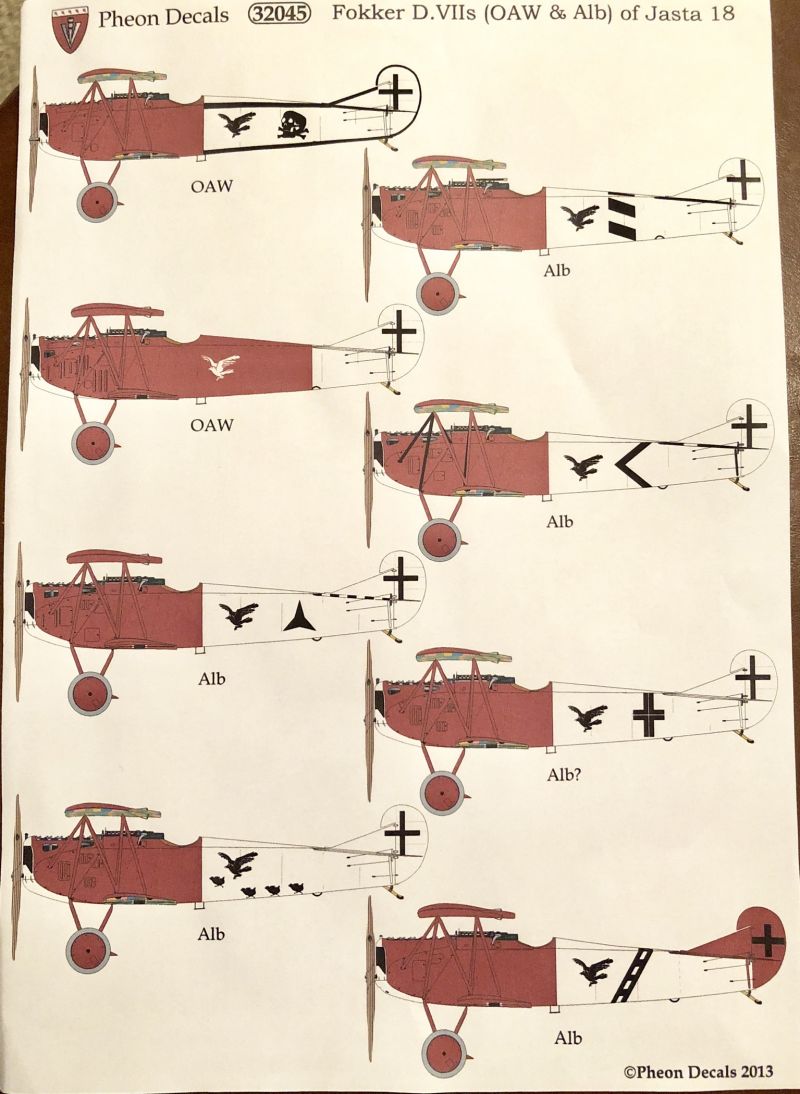 Jasta 18 may be one of the best known German squadrons of WWI; the aircraft flown were originally all blue with red noses under the command of Rudolph Berthold until his transfer out of the squadron. Following Berthold's command of Jasta 18 was August Raben, who had the aircraft repainted bright red, with the tail and fuselage (starting at the rear of the cockpit opening) painted white. Eventually the aircraft all featured a black stenciled raven (Raben is German for raven) on the fuselage, with the exception of August Raben's personal aircraft which featured white ravens for identification.

The Jasta's assortment of Fokker D.VII's has been fairly well documented in photographs and these are the subject of this decal collection from Pheon Decals. 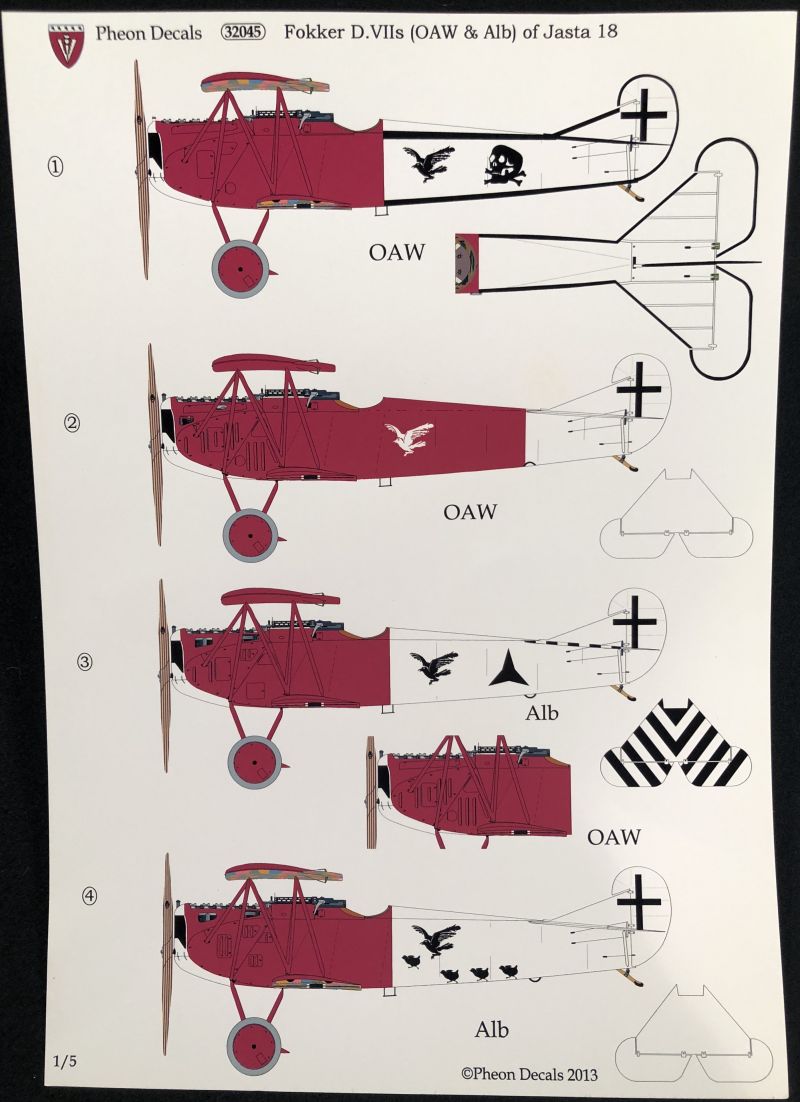 While eight D.VIIs are shown on the cover art and header image on Pheon's site, there are an additional two Jasta 18 D.VIIs and Raben's Fokker Dr.1 included as a bonus, for a total of eleven aircraft. Nine feature the prominent black raven on both sides of the fuselage, while Raben's D.VII and DR.1 both feature the raven in white. These aircraft are: 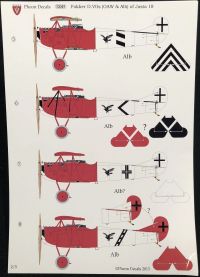 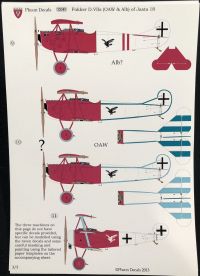 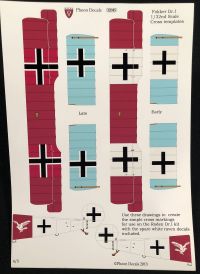 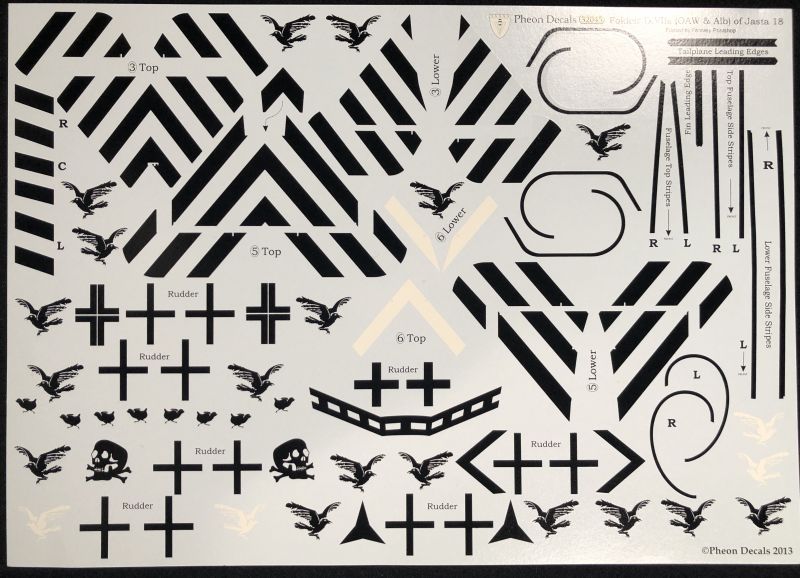 One large decal sheet is included with this set printed only in black and white, and it is absolutely crammed with markings. By my count, enough ravens and fuselage crosses are included to build all ten D.VIIs, as well as ravens for the Dr.1. The builder needs only to use kit decals for the wing crosses and to mask and paint the colour fuselage bands (option #9), fuselage and tailplane striping (option 10), and fuselage crosses for the Dr.1. Full size templates are included to help the builder correctly mask the areas on these three aircraft, printed on glossy card stock like the colour profiles.

The decals feature very thin carrier film as is common with products printed by Fantasy Printshop (Pheon's go-to decal manufacturer), and all artwork appears very well executed. Included with the decal sheet are colour profiles printed on glossy card stock are a booklet with detailed notes on each of the aircraft. Many of the aircraft were seen to have various cut-outs in the engine cowl for cooling and these are noted in text and in the side profiles where appropriate. Some aircraft depicted feature the undersides of the wings still covered in lozenge fabric (again, noted where appropriate in the booklet), and others had the wings completely covered in red.

This beautiful sheet is recommended for anyone needing to add a "little bit" of red to their German aircraft collection, and is available directly from Pheon Decals for GBP 12.75. Review copy courtesy of my own wallet. 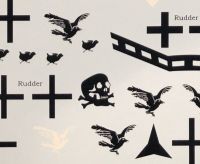 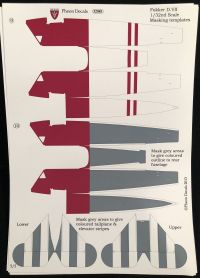