Inside the Armour Publications | Stringbag! 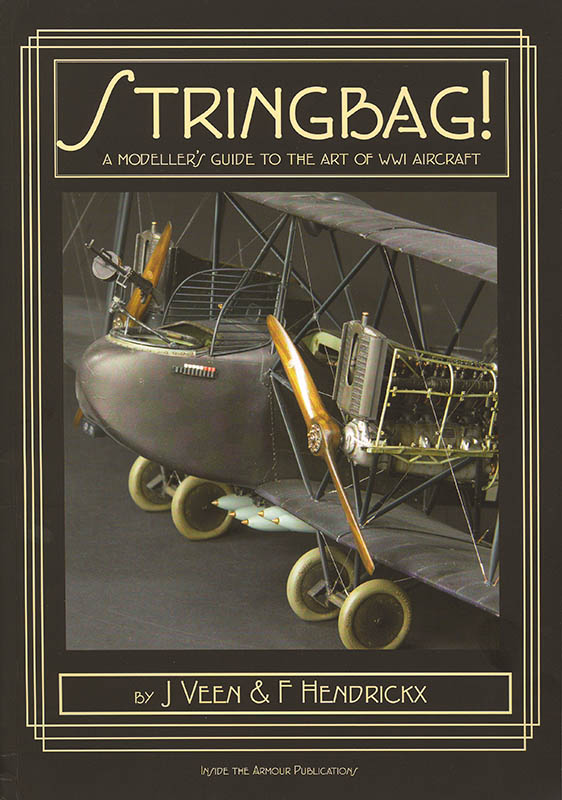 With the increasing popularity of large scale WWI aircraft modelling over the last decade, thanks largely to the fantastic kits released by Wingnut Wings, it's not surprising that there would be a corresponding increase in modelling publications covering the topic. The latest entry into this burgeoning market is from Inside the Armour Publications, and the full title is Stringbag! A Modeller's Guide to the Art of WWI Aircraft.

Written by well-known modellers Jeroen Veen and Flip Hendrickx, it features six model builds (three from each author), and seven brief technique tutorials. All the build articles feature Wingnut Wings kits. The following shows the structure and contents of the book:

The book closes with a gallery featuring WWI aircraft builds from each author.

The model builds are universally excellent, with decent photographs showcasing impressive results. The articles themselves are authored in a conversational style that is largely easy to follow, with a noticeable effort across the board to explain the techniques and approaches being used. Each author offers different approaches to common elements of the build process, particularly with regard to painting and finishing techniques, which is quite useful.

The tutorials included in the book cover the usual areas that modellers often find difficult or intimidating when it comes to building WWI aircraft. They're brief, and not especially comprehensive, but do an admirable job of conveying some basic solutions to these common problems.

There are a few editorial issues, however, particularly with regard to the high number of spelling mistakes and typos found in the text. There are also a couple of misplaced photo captions, and some random variations in font size and type. Happily, none of this interferes in any real way with the clarity or value of the information contained within the book.

Word is that work has already commenced on a follow-up volume, which is welcome, but I'd like to see some improvement in the number of errors in the text. Overall though, I can certainly recommend this first volume to neophyte WWI aircraft builders as an excellent source of learning material.

Many thanks to Inside the Armour Publications for the review sample. The first sample arrived with significant water damage, and it was replaced swiftly and without question, so top marks for customer service!