Scale Aircraft Conversions is rapidly expanding their product line of white metal landing gear for large scale aircraft models. This is a review of the new P-38 landing gear to be used in conjunction with the Trumpeter kit. 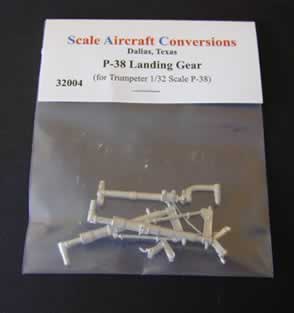 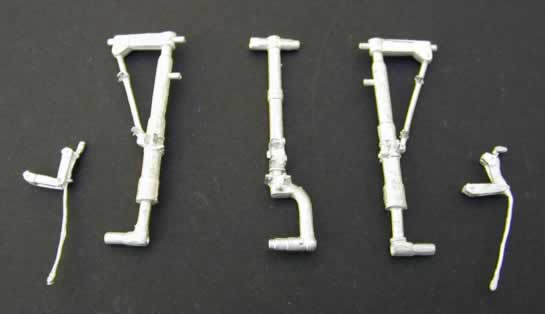 The set consists of five white metal parts to be used as direct replacement items for the plastic pieces provided by Trumpeter. Each strut is nicely cast with subtle surface detail and appears almost identical to the kit items. Consequently, instructions are not provided as the kit plans are suitable. No kit modifications are required for this installation. Some casting seams are evident but should be easy to remove. Scissors are provided as separate items for the main gear only whereas the nose gear makes use of the kit pieces for additional detailing.

One of the inherent weaknesses of large scale models is their weight. Over time, plastic landing gear and axles can become weak and susceptible to breakage. It is also worth considering that the P-38 requires significant weight in the nose to achieve its correct stance on the ground. This will add further strain on the kit landing gear.

I recommend the white metal parts without hesitation. I am confident that these detailed parts will stand the test of time and more than adequately support your finished model.