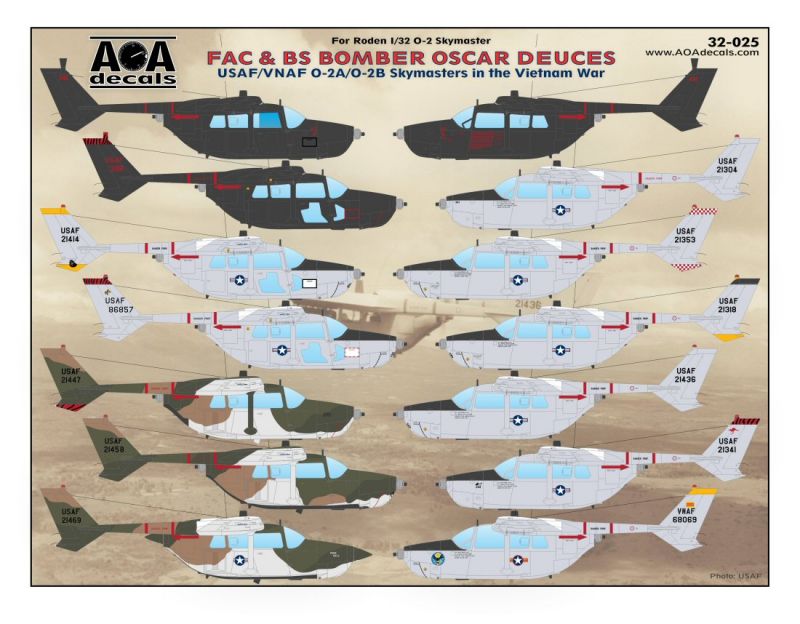 This is AOA Decals' release of markings for the new Roden O-2A 1/32nd Skymaster kit.

The Cessna O-2 Skymaster or "Oscar Deuce" was the military version of the Cessna 337 Super Skymaster that was used in Forward Air Control (FAC) and physiological operations (PYSCOPS) by the United States military between 1967 and 2010. In 1966 the USAF commissioned Cessna to build a military FAC variant to replace the O-1 Bird Dog and the O-2 Skymaster was the result. The O-2 is a twin engine, low operational cost, piston powered aircraft with one engine in front, and one in the rear in a center line thrust "push/pull" configuration for ease of operation. The high wing push/pull configuration provided clear observation below and behind the aircraft, and made for a great forward observation aircraft with great all around visibility and low maintenance costs.

The O-2B model configuration was essentially a civilian Cessna 337 SuperSkymaster modified and operated by the USAF for PYSCOPS. This earned it the dubious nickname of "The Bullsh*t bomber". The O-2B had 4 place seating as apposed to the tandem seating fore and aft of the A model, along with and 1800 Watt loudspeaker mounted on the rear starboard side only, and had the door and upper wing windows removed. The O-2B also had a leaflet dispenser installed in the belly, had the wing pylons removed, as well as some differences in the instrument panel, along with some B models retaining the propeller spinners of the civilian version. The O-2B shared the same antenna configuration as the O-2A.

The current Roden O-2 kit release does not include prop spinners, so one will have to scratch build those as well. However, Hannants now looks to be listing two future Roden O-2 releases:

The former release of these two is the Rhodesian War Lynx version, and from a quick search on the net, this version may come with the needed fore and aft propeller spinners. 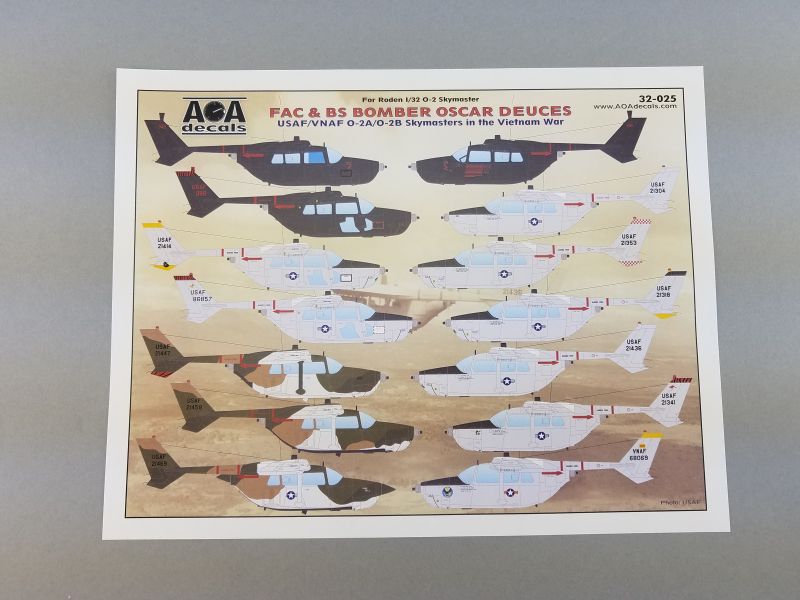 AOA Included O-2B options in the hopes Roden will release an O-2B boxing or someone will produce a B conversion, or for those looking to scratch-build or even those not particularly concerned with A vs B differences. From my personal perspective the differences do not look to be that difficult to reproduce, especially considering the current Roden kit comes with a 4 seat arrangement, actually closer to the O-2B than the O-2A.

The AOA decal set contains enough data/stencil markings provided for at least two complete aircraft - potentially more if you go with the overall black options or O-2B since neither wore many stencils. Stencils are for the Vietnam period, no kit decals are needed to supplement the AOA set.

Included as a bonus in the AOA sheet is the upper wing "THE FAC" decals to replace the kit version (the black schemes in this AOA release don't use it.) Please consult your references for the particular ship you intend to model to see what stencils and upper wing decals (if any) it carried.

This 1/32nd decal sheet includes 14 marking options for USAF and VNAF O-2s + one bonus option with unknown S/N using the "THE FAC" decal: 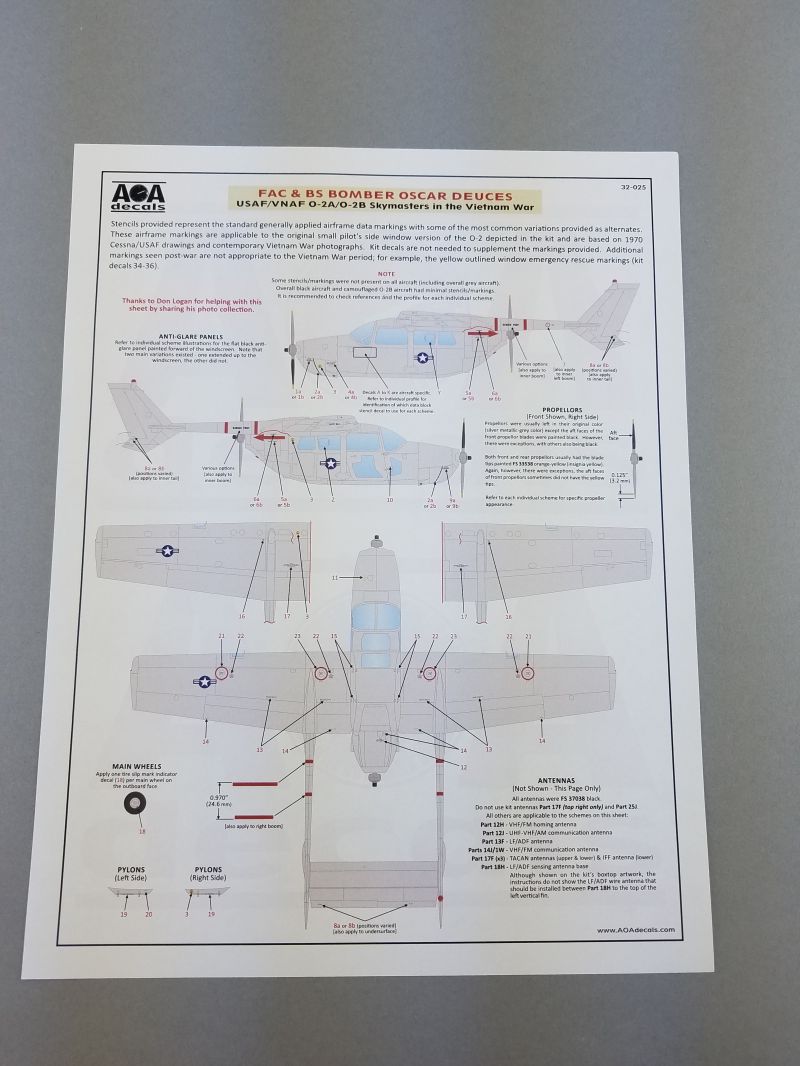 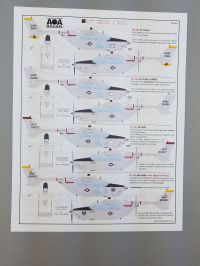 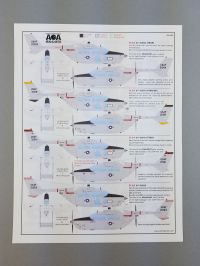 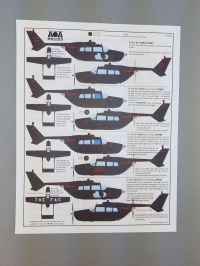 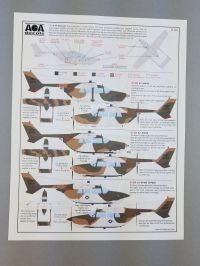 The decals are printed by Cartograf in Italy, are very opaque yet thin, the artwork is very clearly legible under magnification and the printing is all in perfect register and bright. The decals are a significant improvement over the OOB decals that Roden provides, as there are several spelling errors on the kit sheet, and the sheet that Roden provides is not nearly as clear or bright as the AOA sheet is. The stencil guide provided by AOA is also very welcome, and goes into great depth about placement, as each scheme seems to differ slightly in this area. The carrier film is so thin as to be almost imperceptible, and significant effort is needed to even see it on the sheet. 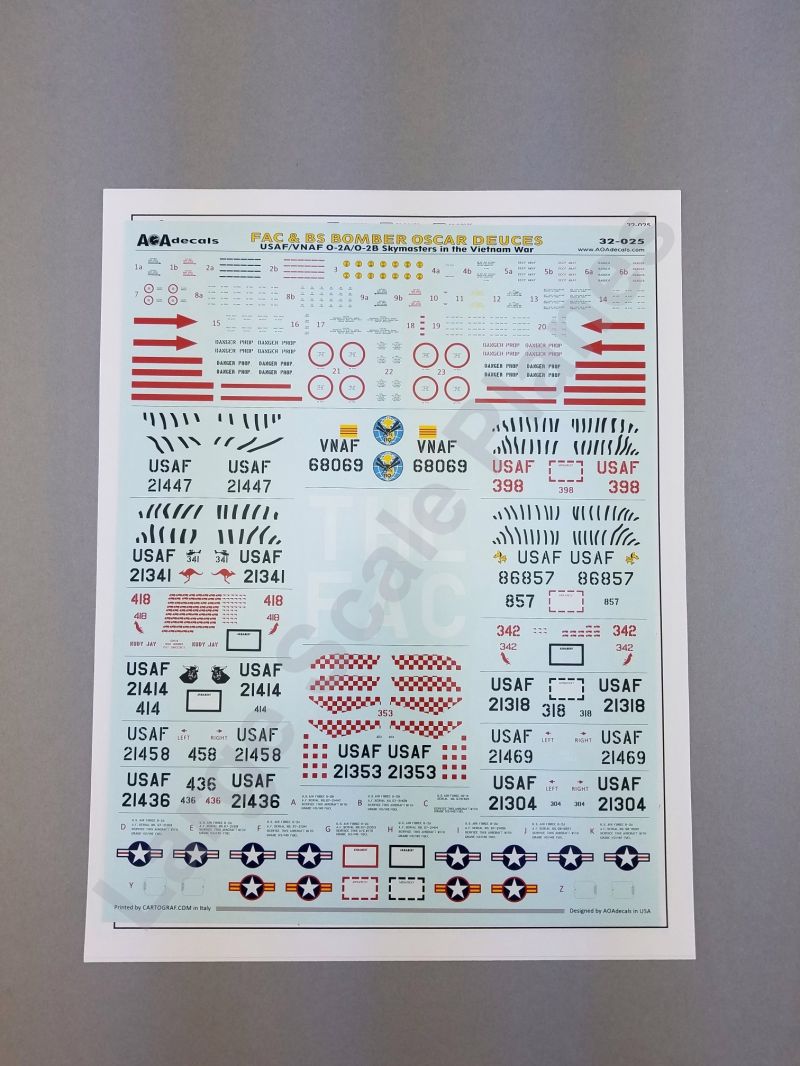 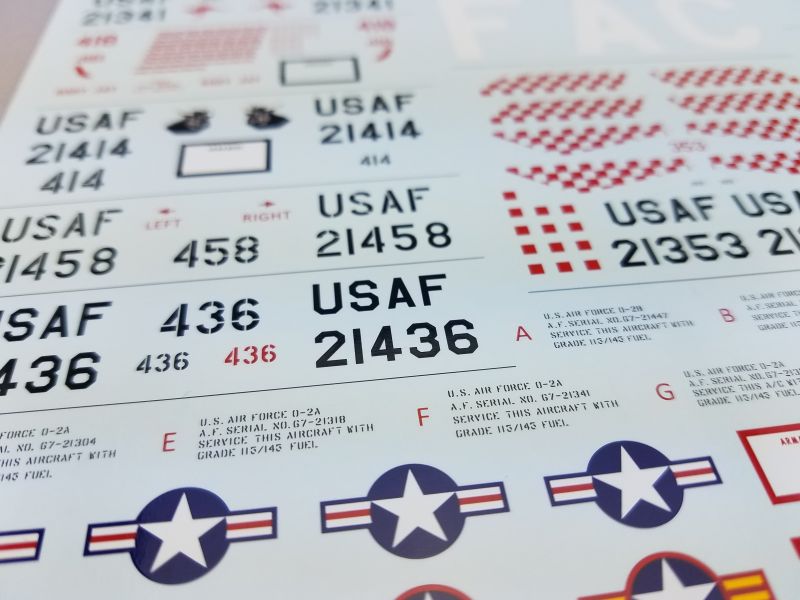 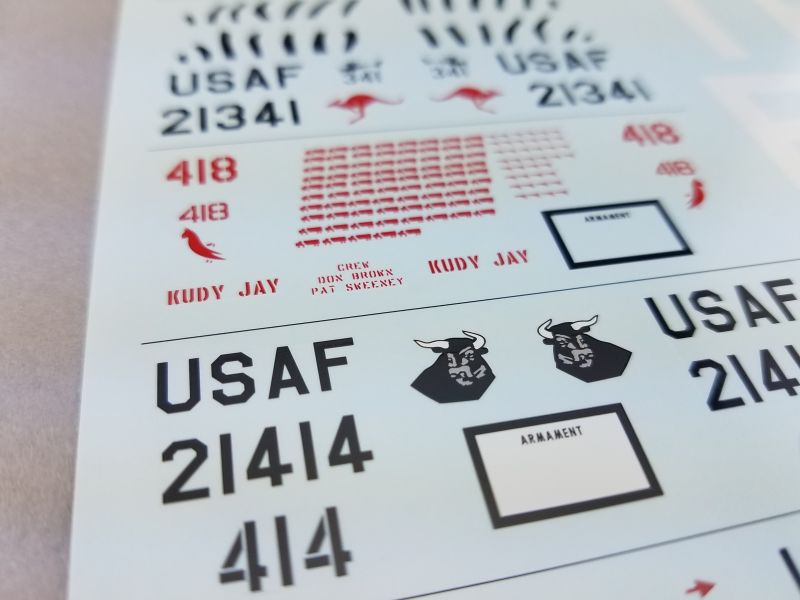 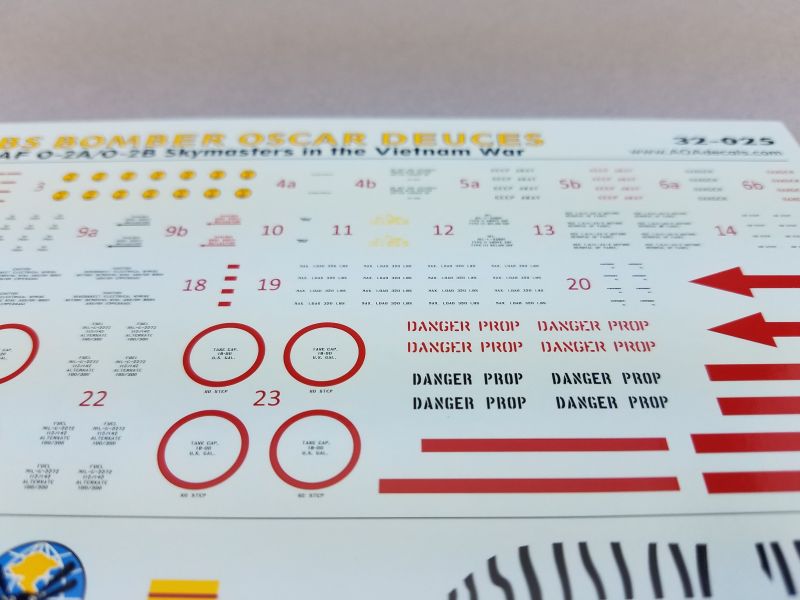 If you are planning on building Roden's new O-2 kit there are so many colorful and well documented schemes in this set, this is sheet to get, as it has a bit of everything. The AOA sheet is a distinct and large step above the decals provided in the kit, and is well worth the price. There are a wide variety of color and configuration combinations in this decal set, and even some schemes that will keep the scratch builder busy or anyone just wanting a more unique looking model.

This decal set from AOA is everything you look for in after market decals; clear, precise, opaque and in perfect register with full documentation and stencil placement to go with it. HIGHLY recommended!

Thank you to Steve at AOA Decals for the review sample.