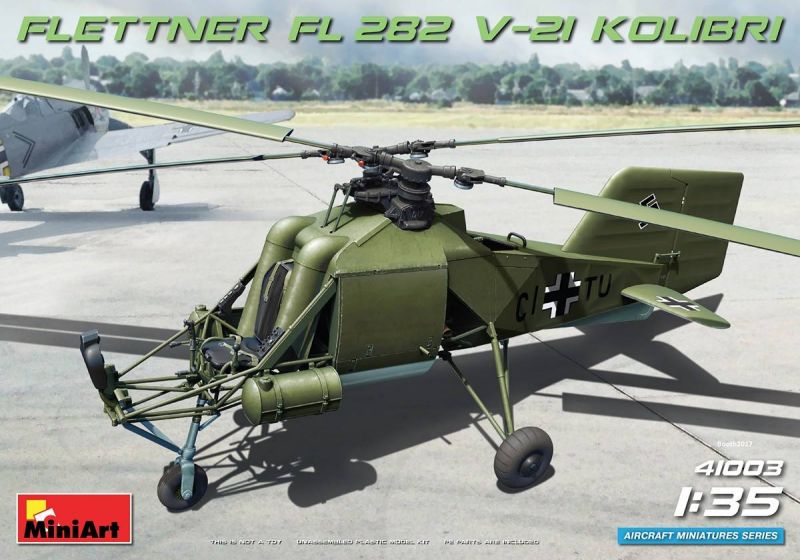 First production helicopter. This is what synthesizes the Flettner Fl 282 aircraft. Being born in the Second World War, this was one of the many technological miracles that Germans came up with in order to win. It was produced in small numbers, and eventually would’ve been deeply modified, Fl 282 made its mark and it is considered a milestone in aviation history.

The particular version we’re looking at in this article is a twin seater variant. The tanks were moved to the sides and outside of the fuselage, opening space for an observer, facing the tail of this helicopter. This is one of the so far three versions released by MiniArt up to date.

Box and the Box Art

In LSP, probably many of the fellow modelers haven’t seen a MiniArt kit up close and personal. This isn’t a surprise, since the Ukrainian company dealt with armor and accessories most of its career. Their boxes are usually thick and full with enormous and often scary amount of parts. They are tiny and delicate and a couple of years ago that was a problem. I am mentioning that specifically, because I was very disappointed with the cracking lines and small elements, which was due to the low quality of the plastic material which came from Russia. Nowadays, MiniArt switched to Western European supplier and the plastic is very nice and flexible. The engineering of their kits demands it. 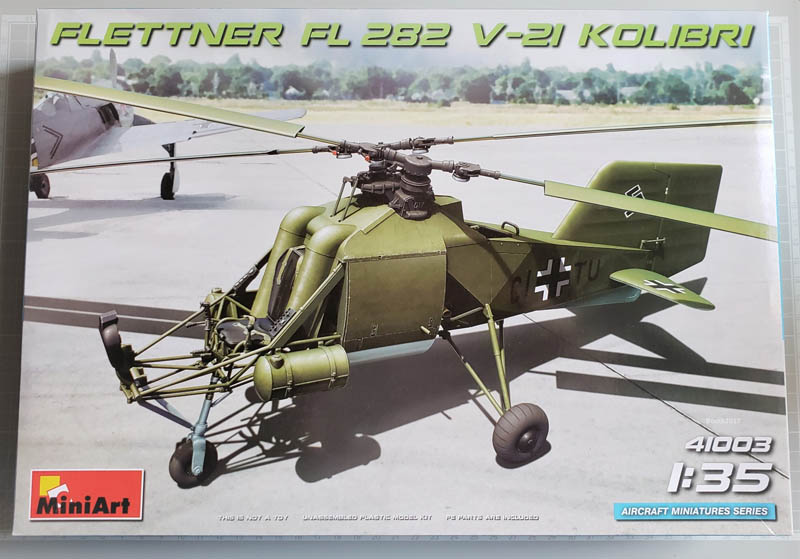 Now back to the box. The box here is with modest appearance and blue on its sides. That brings the sky color in mind and in the same time differs a lot from the standard MiniArt box which was orange or red. This is because this Flettne Fl 282 is part of their line of Aviation series, which hopefully will grow in time.

On the box we have a beautiful depiction of the 282 and in the background a Fw 190, both sitting on a nice tarmac field, contrasting with the abandoned and destroyed Luftwaffe aircraft that we are used to see on grass strips. The swastika is cleverly covered by one of the rotor blades and the authenticity appears to be very good due to that fact. 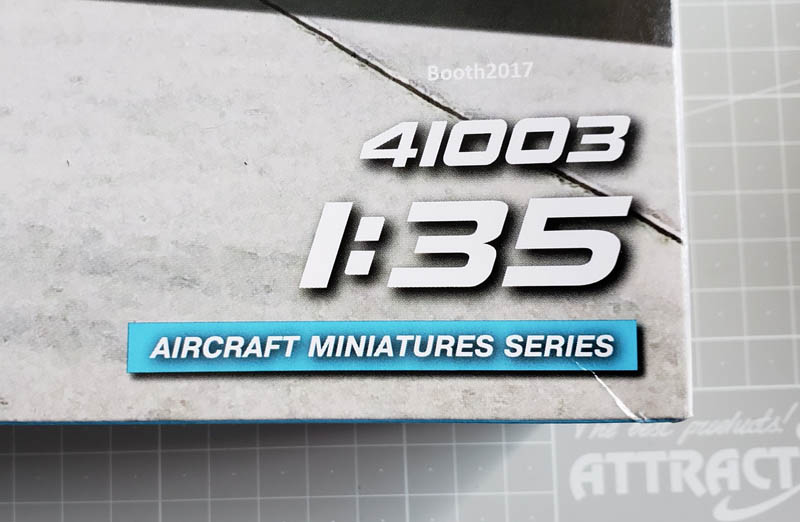 Inside, there is modest amount of parts. For MiniArt. I am saying that because their interiored tanks have 4 or 5 times the amount of plastic and are crazy complex. Here the box is roomier enough and that is because the Flettner helicopter wasn’t too complex in its essence.

The sprues feature engine, rotor blades, wheels and of course the fuselage, which is the most interesting part of this kit. Back in the '40s, it was designed as a tubular construction covered with fabric and with open cockpit. The tanks as mentioned above, are on the sides in this particular version: V-21.

The sprues feature great number of tiny elements which are very delicate. If you are used to Hasegawa, Italeri or Revell LSP kits, you have to be prepared that more finesse will be required while building this helo. 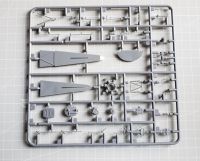 From the pictures it is clearly visible that the quality of the moldings is high and is quite satisfactory for kit produced in the 10s of the 21st century.

No such thing. Open cockpit, old school appearance. Even though if MiniArt’s Aircraft series evolve, you will be pleasantly surprised with the quality of their clears. Not in this kit though.

The PE sheet is small. This isn’t typical for the Ukrainian company too. As far as I know Eduard have improvements for the Kolibri, but I haven’t done any research in that matter. The small PE plate here features seatbelts and some structure elements. Nothing too fancy. 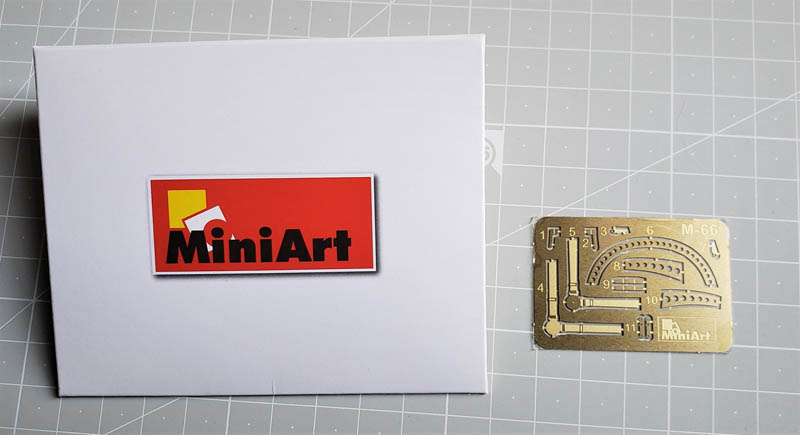 The packing though, is the standard for new kits of MiniArt, which is small thick letter-like envelope, protecting the PE hidden inside. Very nice touch.

Decals that MiniArt produce are a subject of many controversies. Some love them, others hate them. I haven’t had any troubles with those, however I’ve heard that some people have. I assume it is a matter of experience, as with everything else. 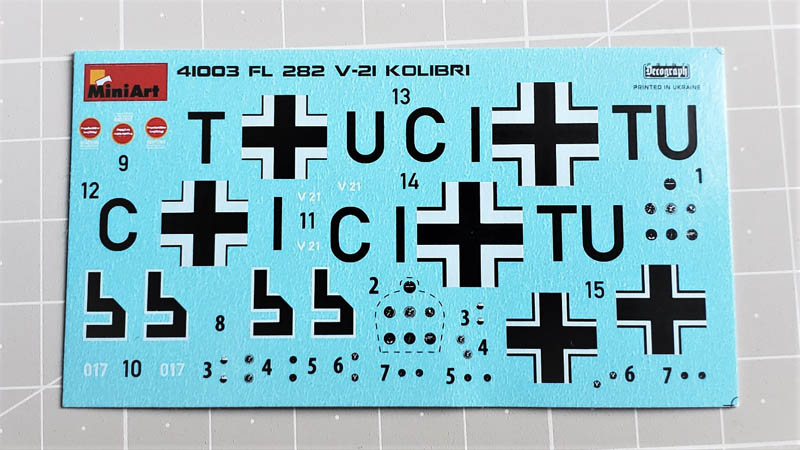 The sheet is most likely produced by Begemot for MiniArt and in this particular kit is small one, featuring a sole option of the aircraft. It does feature the insignia, some technical markings and the gauges for the sparse cockpit equipment. Swastikas are included too.

Single version is included in this set. It dates from 1944 and it is two tone camouflage – bottom blue-ish and upper green, RLM colors of course. Interesting thing about the Flettner Kolibri is that the top and bottom markings are applied on the horizontal stabilizers, because of the lack of wings. 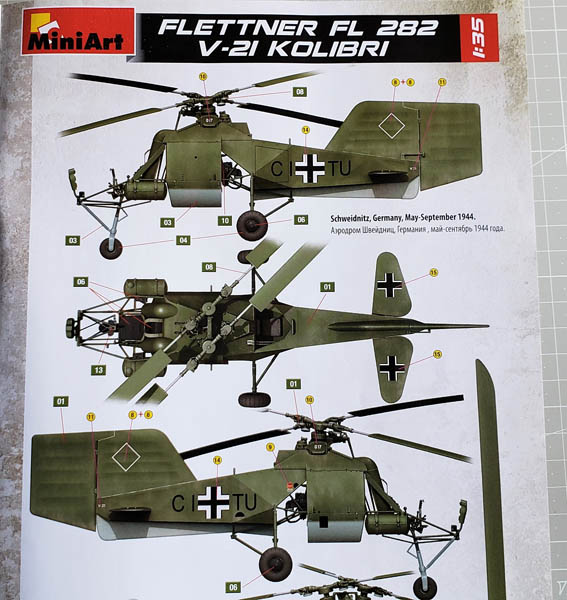 Probably, the single green tone of the upper parts could allow for good effects with painting and weathering, exaggerating /in the positive way/ the fabric cover and the weathering accumulated during the short flying career of the Kolibri. Other options of the helicopter released by MiniArt are featuring different appearance if you are interested in that. However in my opinion this will be enough, especially with the fact that this particular aircraft has different charm and it is not due to its camouflage.

If you haven’t played with MiniArt until now, maybe it is a good time to start. The kit has the typical MiniArt engineering and design approach and it is promising. The accuracy is something that I cannot comment about, but the quality is very good and the price is lower than what I would expect for such an exotic model. Every helicopter builder should be interested in this kit /at least to some extent/. Most of the Large Scale Luftwaffe modelers too.

With the quality provided and the price tag, this kit is worth the try, even if you are not that into helicopters. It isn’t bit and it isn’t complex too, but it is not something for inexperience modeler either. In my opinion this is a very good combo and it will please many. As a Luftwaffe fan, for me it represented a very nice surprise. For a helicopter lovers I bet it will be even better!