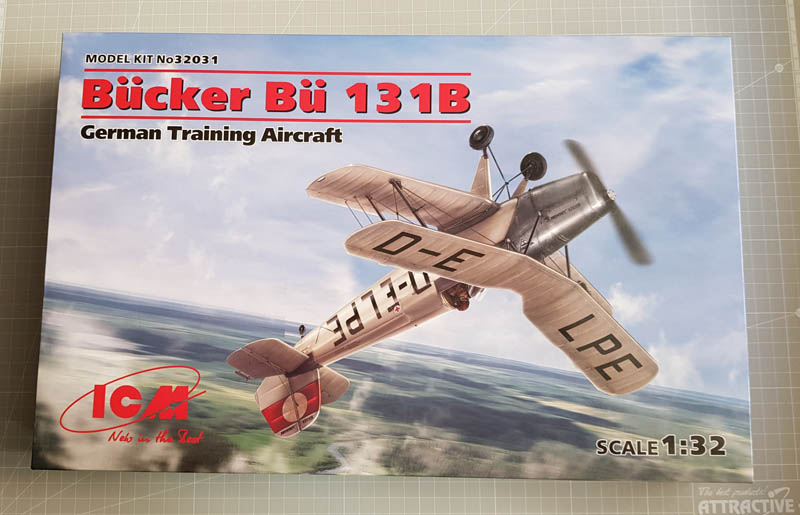 Training aircraft never get enough attention when it comes down to scale modeling. And by training aircraft I don’t meant T-38 but rather simple, entry-level birds, that mean a lot to so many pilots out there. Such planes are highly respected and gave wings to thousands of pilots, who will always remember their first love. Such an airplane is the Jungmann – Bucker 131 – that Luftwaffe used in the '30s, to initially train its pilots for their future careers.

Produced since 1935, this was the last bi-plane of the Second World War built in Germany. The production run lasted 10 years and more than 5000 were manufactured for that period. This popular plane was produced under license in Czechoslovakia, Hungary, Japan and Spain. Those countries used their Jungmanns up until 1970s, when slowly the aircraft was transferred into private hands. Some of those still fly to this day and not only that, but several newly manufactured planes left the factory about two decades ago. Pretty impressive!

Luckily for the modelers, ICM took the Bücker into consideration and made a 32nd scale kit for the fans. The model that we’re going to review today is the Bücker Bü 131B, ICM #32031. The boxart hints about the qualities that this bird possessed, being depicted in an inverted attitude, in the standard Nazi Germany colors. The background is somewhat blurry, to add to the feeling that something extreme is happening and the author caught the moment in the perfect possible timing.

The box features color profiles on one of the sides and it is not a thick one, but rather delicate. This is a 32nd scale plane, but in real life the Bücker 131 was not a big airplane, therefore the box size here. Once you remove the lid you can find an enclosed cardboard box, just like Zvezda and a few other companies offer their kits. That adds additional protection, although here it is not needed. By that I mean that the model itself is not made of overly many parts and there is plenty of room in the box.

We have the plastic sprues – gray and transparent – in one big envelope and on the bottom of the box, just beneath those sprues we have the instruction sheet and the decals, stashed in between the instruction booklet pages. All this – not much at first glance, but once built will look pretty attractive due to its distinctive shape and of course, number of wings!

The booklet starts with a short description of the specific version that you get with #32031 – 131B. It is not much, but is better than nothing. It comes both in Russian and English. On top of that, some specs are included and beneath them you can find a list of the colors that you will need during the build. 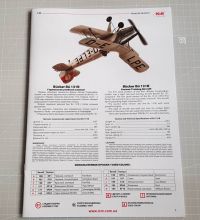 Once the building process starts, there are not many colors, only mostly black and red. The steps are not overcrowded with information and everything is rather minimalistic, which actually seems very nice. On the other hand, ICM could’ve exploited the aircraft a lot more. They included the engine, but everything else might eventually annoy the expert modelers. Nothing specific in mind here, only that the more complex build usually gathers more attention.

Of course, simplicity here will make the kit a pleasure ride for the novice modelers and you can always add a lot made from scratch or aftermarket if you decide to go that way. The possibilities if you are into that are practically limitless. However, in reality Bucker 131 was a rather simple construction so one must take that into account as well. With that said, you cannot expect the Wingnut Wings sophistication, but as mentioned above: you can always alter the kit by yourself, since the basis presented with the box is very nicely executed.

Based on the instruction steps, you probably already guessed, that the sprues aren’t that many. The gray plastic ones are two in total. The detail on those two sprues is superb though. The first impression that I got was from the engine. Everything is engraved pretty neatly and the flash is limited to a beautifully low level.

There are rivets, panel lines and some nice small parts. The quality is contemporary, without any defects or let downs of any kind. Of course, the details mentioned above are limited, due to the construction of the real Bucker Bu-131. The fabric was the main material used, thus with this kit this is the most important thing to consider. ICM delivers very good representation of it all. The fabric is presented in realistic manner and in my opinion this is the strongest side of this kit.

The wheels are too simple for my taste, but we can hope that an aftermarket substitute might appear on the market at some point. However, besides them, everything else is nicely moulded and with the proper painting techniques and weathering stages, this can be turned into one really stunning Jungmann, despite the modest number of parts.

Clear sprue is a single piece and it is a small one too. It holds the windshields and the dashboards of the two cockpits. The latter ones are not of great importance when it comes down to clear plastic, but the windshields are rather impressive. They are made of thin material and feature good transparency overall. However, thickness is their main advantage. This is one of the high points of this kit. 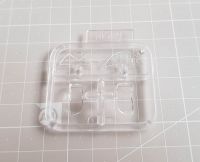 The dashboards on this Bücker kit are made from transparent plastic because in the decal sheet there are gauges that are to be placed on those. Actually not a bad idea, considering the open cockpit of this Jungmann. This is an interesting decision from ICM and only after few of those appear built, we will know was that decision an advantage or not. It seems like a good idea overall.

Gauges featured on the decal sheet were already mentioned above. Besides those, there are registration letters for two options and some “Bücker Jungmann” stencils, plus some technical markings and the First Aid kit typical for the Luftwaffe airplanes from that era. 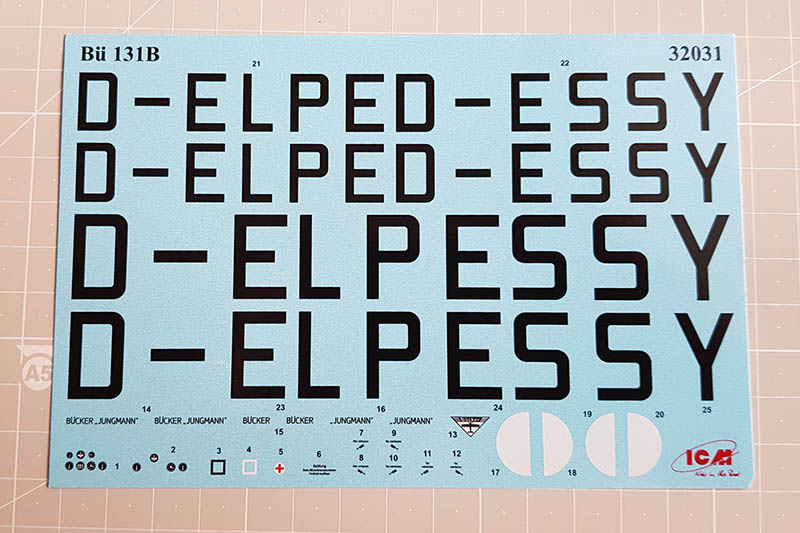 The registration letters are rather big and probably will look better if painted over the kit, instead of the decals offered here. The quality is very good with barely visible transparent carrier film, but still, decals of that size can cause some troubles.

There are two paint options, which differ one from another only by the registration of the aircraft. The tail fin features the red stripe with the while roundel inside of which a swastika should be placed. That is missing from the decal sheet though. Probably ICM targets markets where the symbol is banned. 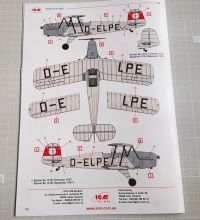 Overall, both airplanes have very attractive looks, due to the typical German paint scheme for that era, still bright and somewhat undisturbed by the war needs. The light colors are two, the darker one (gray) covering the front end of the aircraft where the engine is, while the rest is silver-ish in appearance. It resembles metal, but it is actually only paint.

One must be very careful how exactly will approach this paint scheme, since the fabric needs specific weathering techniques applied, thus pure metalizers might not be the best choice here. Besides, on some aircraft, the grey front was changed for black or light blue. With that said, the web is full with other options as well, which with some masking can be easily replicated and might present you with different and more vivid variation of the Jungmann.

Finally a good kit of one of the training legends. Tiger Moth, Stearman Kaydet, Bücker Jungmann – those were all legends. Still are. And they deserve nice and contemporary representations in scale. ICM delivers here with this kit and with some minor add-ons from scratch, this kit can be turned into a real beauty.

There are some imperfections of course, but considering the price and the fact that the market is not boiling with new trainer aircraft, this release should be well accepted and deserves respect. The overall quality is high and it should be a fun build for both inexperienced and master modelers.