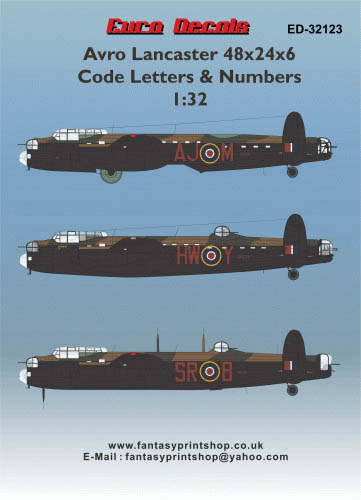 Through its Euro Decals range, Fantasy Printshop has released a comprehensive set of decals covering code letters and numbers for the Avro Lancaster in 1/32 scale. The four A4-sized sheets in the set are comprised of two each for numbers and letters.

The "48x24x6" text refers to the dimensions of the full-size code letters: 48 inches high, by 24 inches wide, with a 6-inch stroke width. This was the standard dimensions for Lancaster code letters during WW2. 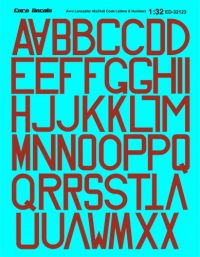 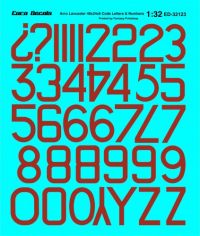 The decals themselves are very nicely printed, with good colour density and no discernible flaws. Variations in character design are included on each sheet, so you should be able to match your references, and depict almost any standard Lancaster used by Bomber Command during the war.

It's worth noting that you can also purchase these sheets individually, rather than as a four-sheet pack.

This is a handy utility set, with excellent print quality and some useful lettering variations. Highly recommended if you want to build a Lancaster scheme that doesn't come in the box.