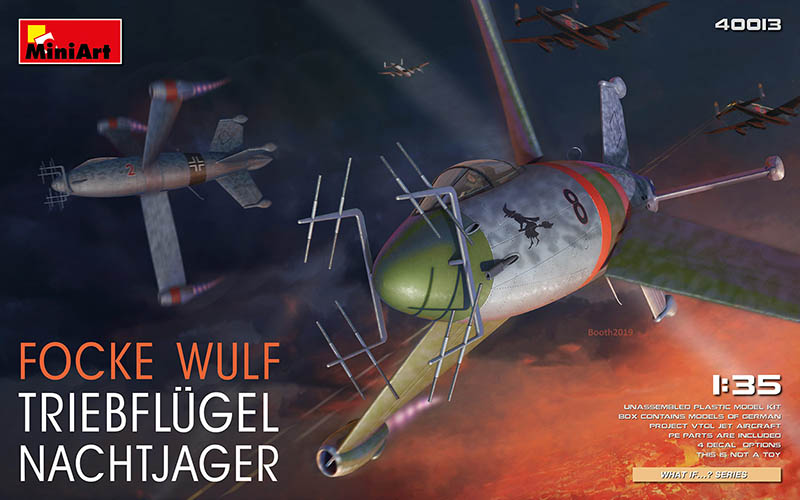 Triebflügel Nachtjager was the Night Fighter-Interceptor version of the Focke-Wulf Triebflügel concept aircraft, which, as well as its base variant, never got to the skies. This odd looking aircraft/rotorcraft hybrid was designed in the late days of the Second World War and got as far as wind tunnel test model, when the Allied forces entered German territory. It is unclear how effective and how achievable was the whole idea, but one thing is certain: it was unique not only for its time, but as an aviation concept as a whole. The lack of proper wing and the rotating surfaces propelled by jets are hardly imaginable even for today’s standards.

The Triebflügel Nachtjager was the night variant, thus featured antennae on its nose, similar to those seen on many other German planes, like Me 262, He 219, etc. The camouflage schemes were also differently planned, again, according to the main purpose of the aircraft.

The Box and the Boxart

The box is labeled as MiniArt’s “What If…” series, which promises to be a great and tempting line of kits. They started with a helicopter and now this is a continuation of the line, since this aircraft is not a plane, but more of a jet-helicopter-rotorcraft hybrid.

It is enclosed in standard for the Ukrainian company box, which features soft lid and colorful appearance. Inside all sprues are packed together in large plastic envelope and its worth mentioning that the parts are not overly many as with other MiniArt kits. That is self-explanatory mostly because this is an airplane, and planes have significantly smoother outer surfaces and shapes than vehicles. Latter ones were MiniArt’s strong side up to recently.

The boxart is a dark night sky over a German city, devastated by Allied bombing raids. It has dramatic appearance and brilliant colors, emphasizing on the significant features of the Focke-Wulf Triebflügel. Picture itself is enough to get modeler’s attention and MiniArt did their job very well with that.

The instruction sheet is standard for MiniArt in appearance. For those unfamiliar with the company – that means there are outer pages in color, holding the camo schemes and usually the sprue and paint info, and there are building steps on the inner black and white pages, which are depicted in simple and clearly understandable manner.

There are only 7 pages of building, with 23 steps in total. Not surprisingly for MiniArt, but odd for an aircraft model is the fact that there are 9 steps out of those 23 that are dedicated to the interior. Cockpit, guns and so on took some of the attention here, while making the rest pretty simple, but still interesting. 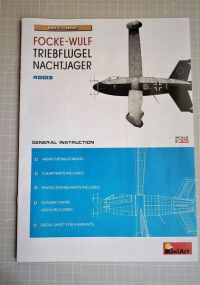 The interesting part is that the engines show some sort of a core and although over simplified – looking very nice. The wings that hold them are very simple, however – rotating. Alongside with that, the landing gear is optional for retracted or not, and not only that, but including some intricacies in its building process.

It is not a complex kit like MiniArt’s tanks and that is certain, but it looks very nice and features three main components of the fuselage, which are to be made movable. By itself, the latter one – an interesting challenge. Everything ends with the antennae, which are fragile and, for those who hasn’t been into Luftwaffe Night Fighters…well – good luck!

My first impression of the parts in this kit was very positive. The bottom parts of the fuselage are riveted in superb manner, and I mean really wonderful! The whole kit is done that way, but I am mentioning the rear end simply because this is the first major part that one sees when opens the kit.

All the small and thin parts (and that includes the antennae) are very delicate and made from fragile and perfectly molded plastic material. While in not so distant past MiniArt had some issues with that, nowadays they are using material that comes from Western Europe and no cracks or unusual breakage is evident.

The fit with MiniArt is usually never the issue, however one must be careful while building this specific Focke Wulf. The reason for that is the rotating parts which will create some inevitable friction and if not properly aligned, it will eventually damage the model if used excessively.

The plastic parts are not many, however the quality compensates for that fact and probably any modeler will be satisfied with this Triebflugel Nachtjager kit. Everything can be seen on the pictures and should create a pretty clear example of the quality that is embedded in MiniArt’s products. After roaming throughout all the sprues, my last impression was pretty much the same as my first one – very positive.

A small cardboard envelope wearing the logo of MiniArt is holding the photo-etch sheet. That is something that I am pretty certain to be a MiniArt’s invention and probably no other company provides their photo-etch sheets in such manner. It is both very secure and protective and in the same time great marketing trick. 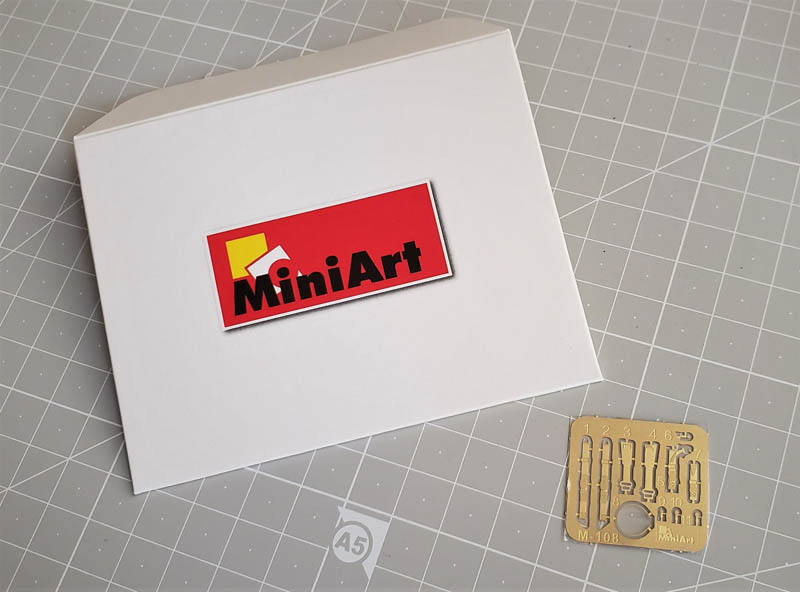 The reason for the needed protection is the fact that MiniArt’s photo-etch material is very thin and extremely delicate. If you have dealt with their tanks and their engine deck meshes, well, I have more than one occasion of sanding some part of the mesh while prepping the PE surface for glue. That how delicate the material is.

So aside for the need to be extra careful and in the same time extra happy about the thickness, you should have in mind that this is pretty small PE in the eyes of that company. MiniArt usually give a lot more, but here we have only seatbelts and an antenna, however that is justified by the odd aircraft in the subject by itself.

As always, the clear parts from the Ukrainian company are superb. I’ve dealt with those on their tram applications and I must say that back then they seemed to be bullet-proof to me. Aside from the fact that they are pretty forgiving to all kinds of glues that might get you in trouble usually, they are very decent in terms of transparency too. The bending of the images behind them is small and they are thin and with clearly depicted frames and proper attachment to their sprues. That doesn’t relief you from being more careful when compared to the regular plastic, but I think this is one of the best you can get in terms of clear parts on the market nowadays. The only thing that one might not like is the fact that even though in a separate envelope, they are packed all together with the rest of the parts and that have a potential for some scratches and minor damages. Nothing that an experience modelers cannot cope with though. 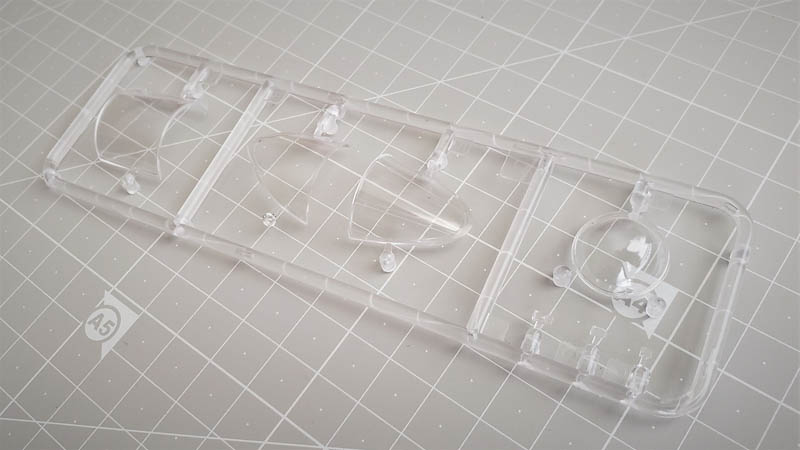 MiniArt provided a medium in size sheet, holding the crosses, the dashboard, some technical stencils and fictional numbers and letters. There are couple of emblems, a flying witch on a broom and swastikas, which are separated into parts, since they are forbidden for use in some countries. 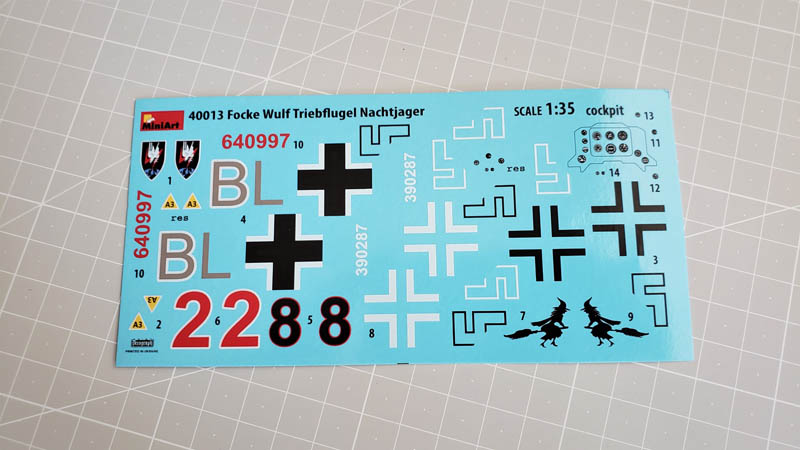 For those unfamiliar with MiniArt’s decals, they are produced by a sub-company from Ukraine and their quality is excellent. They are too thin for the inexperienced modelers, but that shouldn’t be an issue, since MiniArt’s models are not for them either. Even if you are not too good with decal application, if you waste couple of those that are not supposed to be on your project, you will probably get a grip on things pretty quick.

The carrier film is very thin, colors are properly represented and with proper care and attention the results should be superb.

There are four variants included with this release. MiniArt explicitly states that those are fictional patterns, based on What if… concept and probably with some touch from the artists involved in the project. They do follow good logic though, presenting the jet-rotorcraft in a fashion that it would probably have been painted. 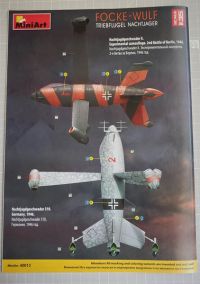 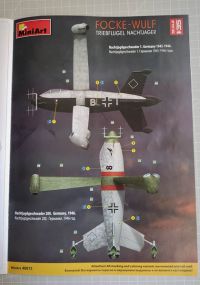 They are 1946-ish options and the first one is with black belly and hand painted light and darker gray camouflage. This is taken from Me 262, Me 163 and He 219. There is some idea here, however, rotating jet-powered wings would beat the purpose of the black belly.

Next one is with green rotor wings, light grey bottom and spaghetti upper parts, similar to Ju 88 night camouflage. The rotor system is outlined with red, which again beats the camouflage purpose and probably this is more fictional than probable option.

The last one (we’ll be back on the third option, don’t worry) is similar to the latter, however only black stripe covers the Cross and some red stripes around the turbine nacelles, which is a lot more acceptable and supposedly – realistic in the What if.. realm.

Back to the third option, probably the coolest looking one – we have splinter camouflage, which can be seen on some later Panther tanks, black and rust red, which even though highly unlikely for a Night Interceptor, presents a superb option for colorful and attractive scale model once completed. Besides the bright colors are interesting base for odd weather techniques, especially around rotating part of the fuselage, where besides the regular wear and tear, probably some streaks from the lubricating solution would’ve been visible.

Being 1/35, this aircraft shows a scale typical for helicopters, not airplanes in the large scale universe. That is due to the fact that this is a jet-rotorcraft and doesn’t have any of the features of the standard planes. Besides, 35th scale is something that MiniArt thrived on for quite some time now and I assume that it was probably easier for them to work in the same scale as before. Being only an assumption, the logic for this being closer to a helicopter is very strong, especially having in mind how it took off and landed. Even though only on paper. With all that said, the completed aircraft is pretty decent is size and even though without too many parts, it still features interior and satisfactory appearance once built. So scale-wise it is cleverly though of and with all said above, it gives mostly pleasant impressions overall.

Unique is a word that hardly fits any scale model, but in this case it is very appropriate. Based on a conceptual design this Focke Wulf Triebflugel is very strong demonstration on behalf of MiniArt, that they won’t turn back on the rare and obscure projects in both armor and now – aviation history. Many of their kits are dedicated to such vehicles and that is the main reason for this company to be different than the rest.

The kit and its qualities are hinted above, but as a conclusion – this is very well though and executed scale model, both detail- and size-wise. There is enough out of the box, which is again something specifically typical for MiniArt and the price is quite right too.

It makes things even harder when you come to think of about what will come next from the Ukrainian model maker. They are just starting with their aircraft line and there are plenty forgotten projects and prototypes out there that deserve their attention is scale. The only thing that we can be certain of is that the next project will also be very intriguing and hopefully with similar realization.