Who doesn't like a Toon!? It's probably too much of an existential question to go into in full depth here, so I'll crack on... This Fleet Air Arm Hellcat II features the one, the only, Patoruzu, the most popular hero of Argentine comics, and so it should come as no surprise that the pilot was a fellow countryman; Sub-Lieutenant Oscar Lorenzo, of 808 Naval Air Squadron, based at Trincomalee, Ceylon (now Sri Lanka) in 1945 - 808 NAS were previously based aboard HMS Khedive, which saw action over Burma.

Some of the Hellcats based on the Khedive were armed with 8 x 60lb rockets, similar to those armed on the Mosquito/Tempest, though they featured a rather bulky blastplate. 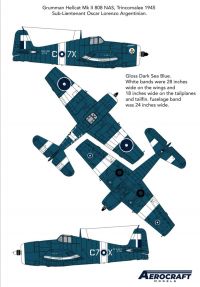 The decals, which are nice and thin, provide all the necessary markings to model this attractive aircraft.