The first Fleet Air Arm squadron to operate the Hellcat I was 800 Naval Air Squadron in July 1943, they went on to provide escort for Fairey Baraccudas attacking the Tirpitz from HMS Emperor in April 1944. A year later, now equipped with Hellcat IIs they were stationed at Trincomalee in Ceylon (now Sri Lanka), in between operating from HMS Emperor, there is a nice photograph of a line of 800 NAS Hellcats aboard the Emperor entering Singapore harbour after the Japanese surrender. 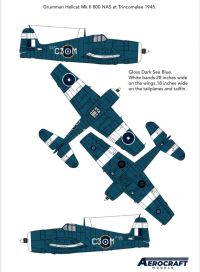 The comprehensive decal sheet provides all the specific markings for the aircraft, and the yellow of the fuselage roundel gives the model a nice splash of colour.