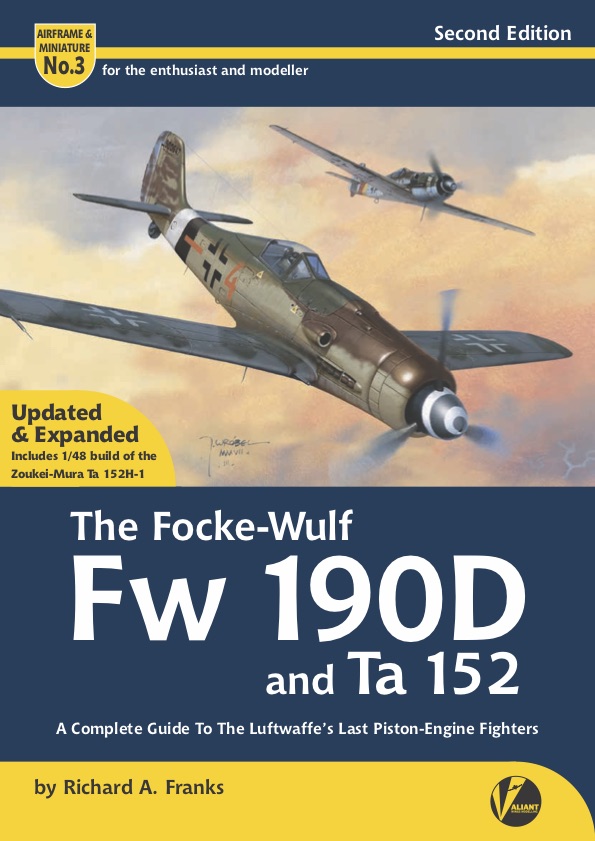 UK publisher Valiant Wings Publishing has published an updated and expanded Second Edition of Number 3 in its Airframe & Miniature series, entitled The Focke-Wulf Fw 190D and Ta 152: A Complete Guide to The Luftwaffe's Last Piston-Engine Fighters. The author is Richard Franks, and the illustrations are shared between Richard Caruana and Jacek Jackiewicz. The striking cover art is by Jarek Wrobel.

The book consists of 176 pages, plus a gatefold section of scale drawings in 1/48 scale. It's extremely well printed on quality glossy paper, and the reproduction of all drawings and photographs is first-class.

The contents are broken up into 10 separate chapters, grouped into two distinct sections: 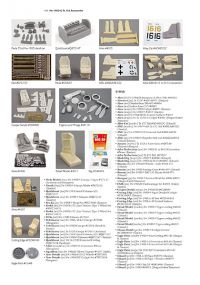 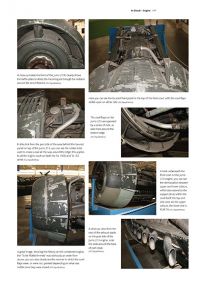 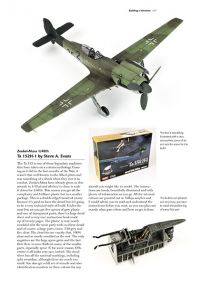 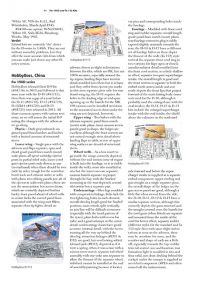 While not mentioned in the table of contents, the book begins with a two-page Preface, giving a potted history of the Fw 190D and Ta 152, and provides useful support for the subsequent technical information.

The sequence of chapters covering the evolution of the Fw 190 and Ta 152 airframes spans 46 pages, and consists of brief summaries supported by period photos and crisply-rendered greyscale profile drawings. They are clear and easy to follow, and form a handy guide for discerning what features distinguished which variants.

This is followed by a brief eight-page look at projected and drawing-board designs, and uses exactly the same format as the previous chapters.

The Camouflage & Markings section is a relatively modest 16 pages, and includes separate sub-sections for stencil placement guides and colour profiles. The colour profiles are by Richard Caruana, and are very well done. This section feels a little slim compared to other titles in the series, but as it covers late-war aircraft that only saw limited service, this is probably understandable. It is, nonetheless, a very handy inclusion.

Chapter 7 features a brief description of the commonly available Fw 190D and Ta 152 model kits. The Fw 190, in particular, has been a popular modelling subject in all scales over the years, and the Ta 152 has had its share of kits too. The pickings are rather more slim in LSP scales, and oddly there have been more kits of the Ta 152 produced than the Fw 190! Only the mainstream kits are covered here, but a more complete list is available in the appendices.

Chapter 8 is Building a Selection, and features the following eight kit builds:

These builds are extremely well done, and it's great to see a pair of 1/32 entries included.

Chapter 9 is called Building a Collection, and features a series of annotated isometric 3D line drawings by Jacek Jackiewicz. These are designed to illustrate the salient differences between the various development and production airframes as the series evolved, and form a perfect companion to the earlier 'evolution' chapters.

Chapter 10, In Detail, features an extensive selections of photographs and diagrams, covering both period and surviving airframes. Many of the images have been published previously, but many more have not. The walkaround photos have been taken with a modeller's eye, which is not only welcome, but very handy.

One oddity I noticed in the Kit List, is that the Falcon vacuform kit of the Ta 152H is listed as announced but never released. This is in fact an error; I know this because I'm currently building one!

At the very back of the book, secured inside the rear cover, is a set of plans in 1/48 scale, covering both the Fw 190D-9 and Ta 152H. The extensive gatefold sheet features the Fw 190D-9 plans on one side, and the Ta 152H plans on the other. These are printed on heavy, non-glossy plain stock.

Not being an expert on either the Fw 190D or the Ta 152, I can't give a considered evaluation of the accuracy or veracity of the text itself, and so will leave that to more knowledgeable readers. All other elements of the book ooze quality however, from the clear photography to the beautiful profiles and the detailed scale plans. Contemporary photographs are plentiful and very nicely reproduced. Overall it's an impressive attempt to be the Complete Guide the title alludes to. Recommended!