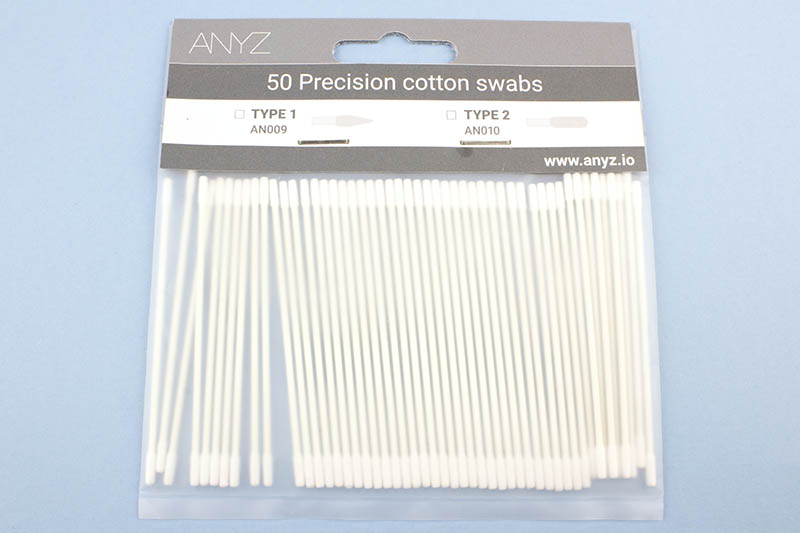 ANYZ is a relatively new firm operating out of Germany, and producing a range of aftermarket resin and decal accessories. They also produce two types of precision cotton swab: Type 1 with a pointed tip (AN009), and Type 2 with a cylindrical tip (AN010). We'll be taking a quick look at the latter in this review.

The pack contains a set of 50 cotton swabs, neatly flat-packed into a clear plastic sleeve with header card. As noted above, each one comes with a tightly-bound cylindrical swab of cotton at each end: 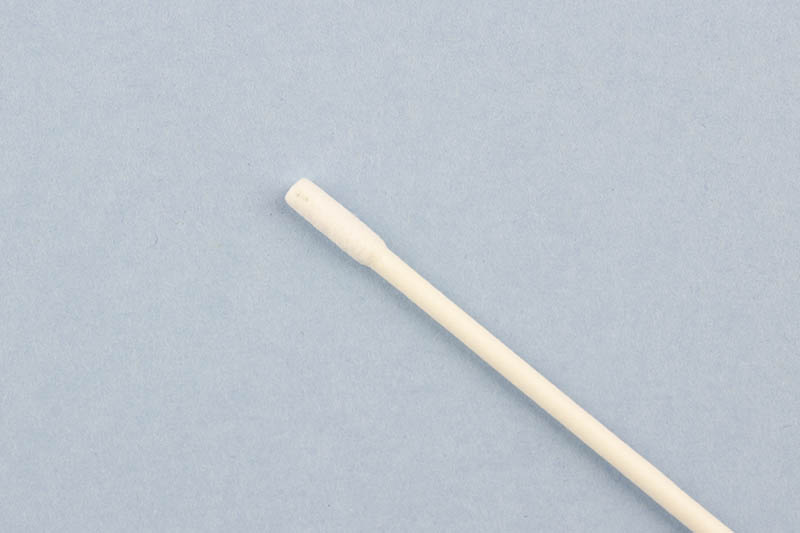 The cotton heads themselves are significantly smaller than those found on the standard household variety that usually festoons our bathrooms and benches: 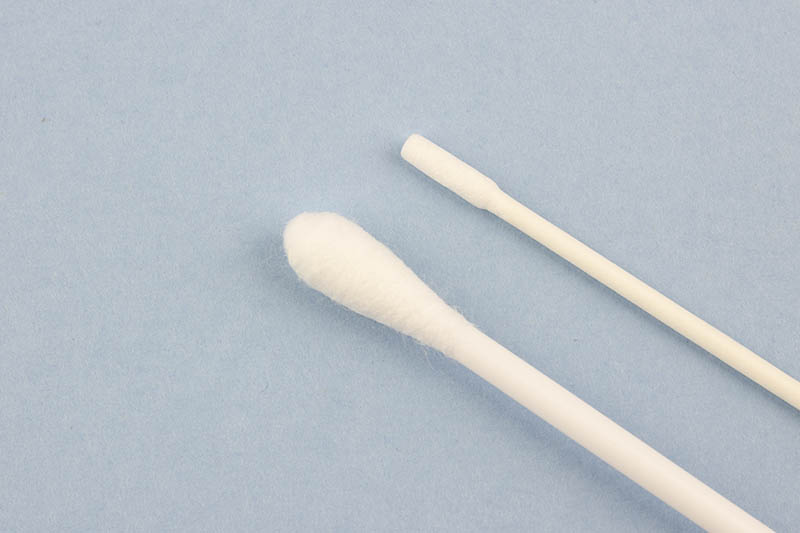 Not only smaller, but also significantly less furry, with almost none of the loose fibres associated with the cheap generic type. This is important, and bodes well for using them in practise. Personally, I've yet to come across a cotton swab that didn't instantly disintegrate into a cloud of paint-spoiling fibres as soon as it came into contact with the model.

I decided it might be prudent to put this hope to the test, and broke out some 1/48 scale aircraft wings for the purpose. I elected to test the performance of these specialised cotton swabs by cleaning up some sludge washes designed to highlight surface detail. I chose to test with both a water-based clay wash, and one using standard oil paints. The goal was to test the structural integrity and general absorbency properties of the cotton swabs, and compare them against the generic variety.

I started by applying some Flory black clay-based wash onto the bare plastic of an upper wing: 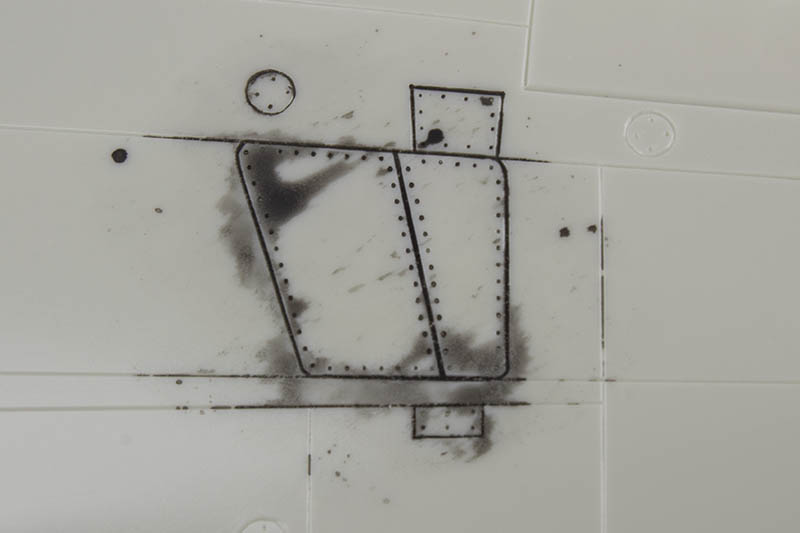 In practise, the wash receded from the highly-polished plastic somewhat, eventually resembling more of a pin wash than a sludge wash. This meant there was much less excess wash to clean up than I had intended, but certainly enough to produce valid test results.

For this test, I was looking for any friction- or liquid-induced disintegration of the fibres on the swab head, and to see how effectively it removed the excess wash. I moistened the swab slightly, and set to work: 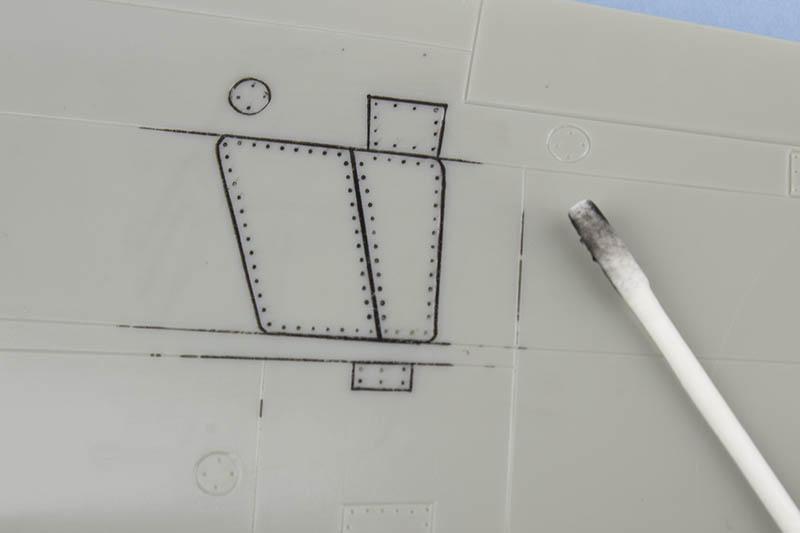 Keep in mind that this is not a review of the wash, only its effect on the cotton swab. Clean-up took a little more work than usual, as these swabs are demonstrably not as absorbent as their regular cousins. This is partly attributable to how compacted the cotton heads are, and partly attributable to the significantly smaller volume of the heads themselves. (In a real-world application, I'd be inclined to choose a tissue or some paper towel for this job anyway.)

As you can see in the photo above, there is little evidence of any deterioration of the swab head, which should last long enough for the swab to fulfil its mission in life.

Next, I applied an oil-based wash to the same area of the opposing wing. The wash was a thick mix of black oil paint and white spirits. I laid it down over a quick brush-painted section of floor polish, just in case the white spirit took a dislike to the underlying bare plastic. 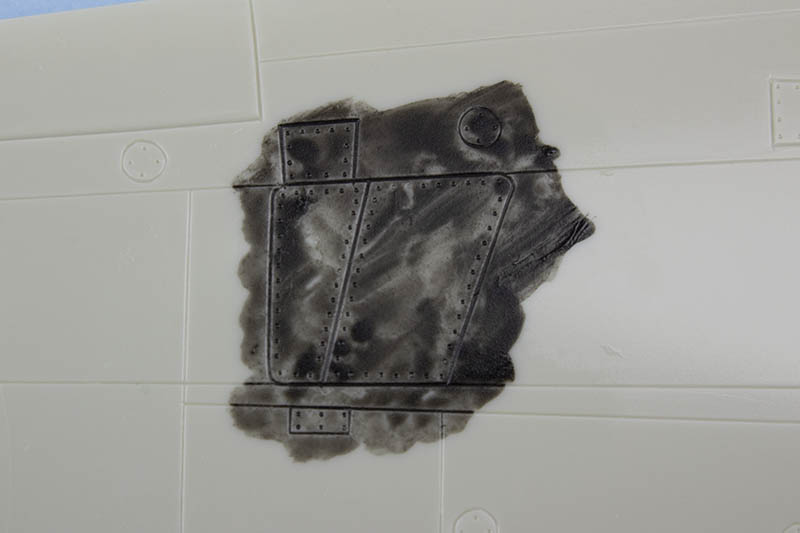 As you can see, this time I was able to get much more excess wash on to the surface, so in that sense I strayed from the strict rules of an A/B testing scheme, but again, the results should still be valid for our purposes.

In this case, I was looking to see if any of the potential problems would be triggered by using a solvent-based clean-up fluid. Would the fibres disintegrate? Would the cotton head detach itself from its stem? In practise, the greater amount of excess wash proved too much for these small cotton swabs, and I had to use two to get the job done.

In fact, I only got half the job done, as I wanted to leave the other half to perform a comparison test using the generic cotton swab: 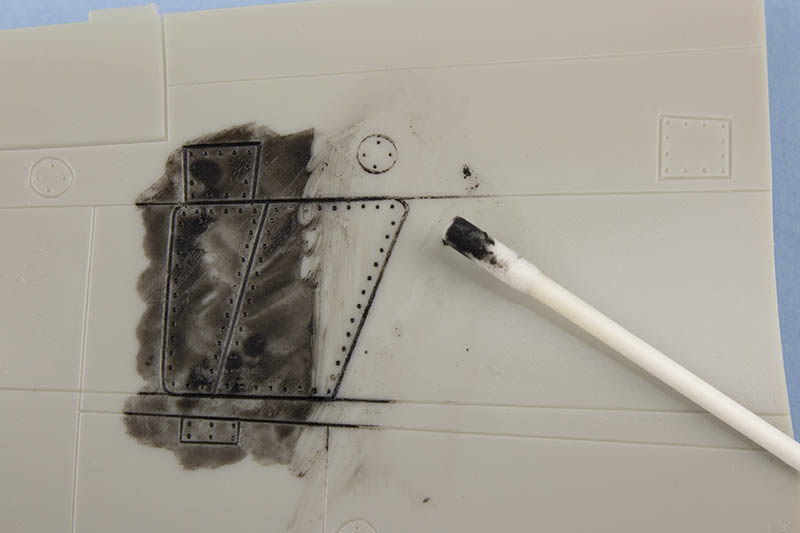 The important thing to note in the photo above is that the cotton swab head remains perfectly intact, and shows no signs of loose fibres or other kinds of disintegration.

On the other hand, while the larger, looser generic cotton swab had an easier time handling the amount of excess wash it had to deal with, the head is already in poor condition after only a few wipes across the surface: 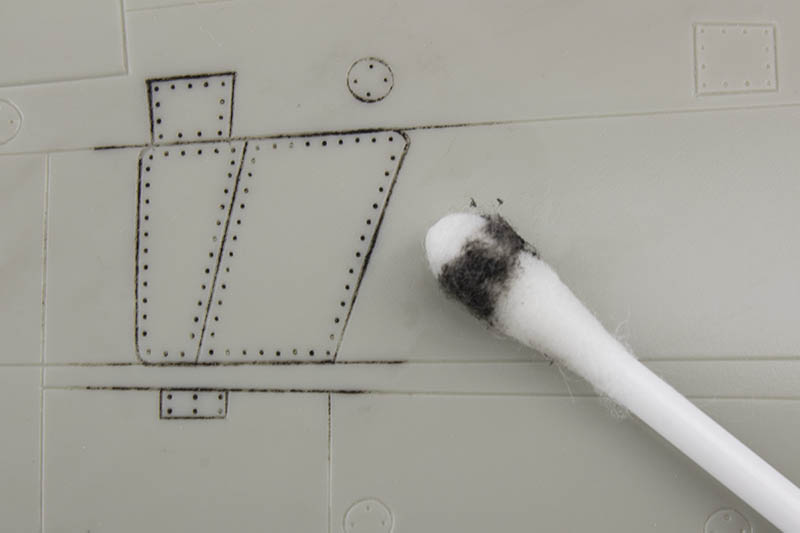 It's difficult to capture in a photograph, and actually looks worse to the naked eye.

Putting aside that my testing was of the quick-'n'-dirty variety, and not something you'd probably ask these precision swabs to do, I think the tests still showed that they're far less prone to annoying disintegration and fuzz-production while you're using them. I'll leave it to you to decide whether this is a significant quality or not. But using them as precision instruments, as the name implies (such as applying or removing weathering materials from tight spaces) is really where they would come into their own. And in that regard, I think the Type 1 variant with the pointed tip would be even more useful!

Thanks to ANYZ for the review sample.